Written by: The Endangered Wildlife Trust

CapeNature and the Endangered Wildlife Trust are excited to announce the discovery of a population of critically endangered riverine rabbits in the Anysberg Nature Reserve. These rabbits represent the first population to be discovered in a formally protected area. 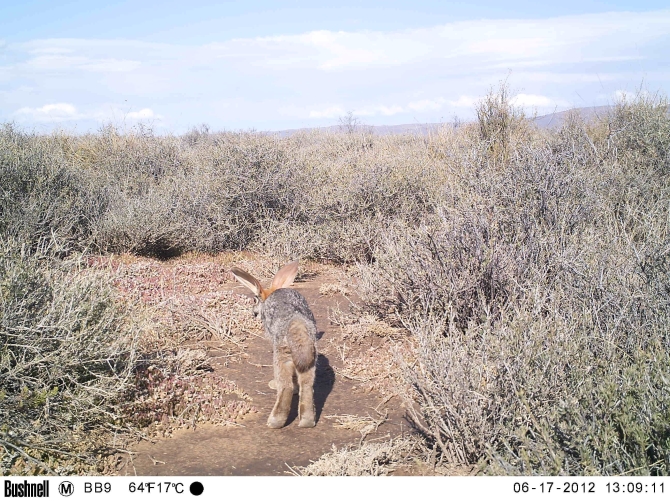 Up until now this critically endangered species occurred exclusively on privately owned farmland or private reserves, where landowners have been working with conservation authorities and NGOs to ensure their survival.

Riverine rabbits have occurred along the seasonal rivers in the Nama Karoo since the turn of the last century, but were only discovered in the Western Cape’s Succulent Karoo in 2004. While much work has been done on the Nama Karoo population, little is known about the rabbit’s habitat preferences and biology in the Succulent Karoo.

Corné Claassen, CapeNature’s Conservation Service Manager and Marius Brand, Anysberg Reserve Manager, led a determined search in Anysberg for this species on the night of the 5 December 2013. Their persistence paid off and a young riverine rabbit was captured, thus not only confirming the presence of riverine rabbits in the reserve, but also that the population is reproductively active. Following the collection of genetic samples, the rabbit was safely released. 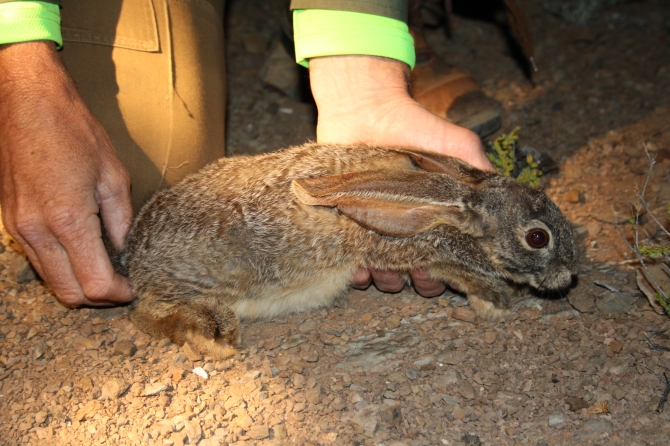 Christy Bragg, Manager of the Endangered Wildlife Trust’s Drylands Conservation Programme, was ecstatic on receiving the news. Bragg said the Endangered Wildlife Trust and CapeNature have been working closely together in the Western Cape to learn more about this iconic Karoo species and it is wonderful to find these elusive rabbits in new territory.

Anysberg lies in the Klein Karoo and is just over 81 000 ha in size. The reserve was established in 1987 to conserve the local veld type and to re-introduce game species that historically occurred in this region. The Anys, Touws, Prins and Buffels rivers and tributaries of the Gourits river system flow through the reserve.

The Drylands Conservation Programme has trialled the use of camera traps to census riverine rabbit populations and will be launching a full-scale study in 2014. Ultimately the cameras will be used to not only detect the presence of this shy species, but to provide sufficient data to determine population densities and trends in population numbers over time. This species is endemic to the Nama and Succulent Karoo areas and serves as an important indicator species for riverine habitat health.

Members of the public are requested to report possible sightings of riverine rabbits to Christy Bragg or Corné Claassen.