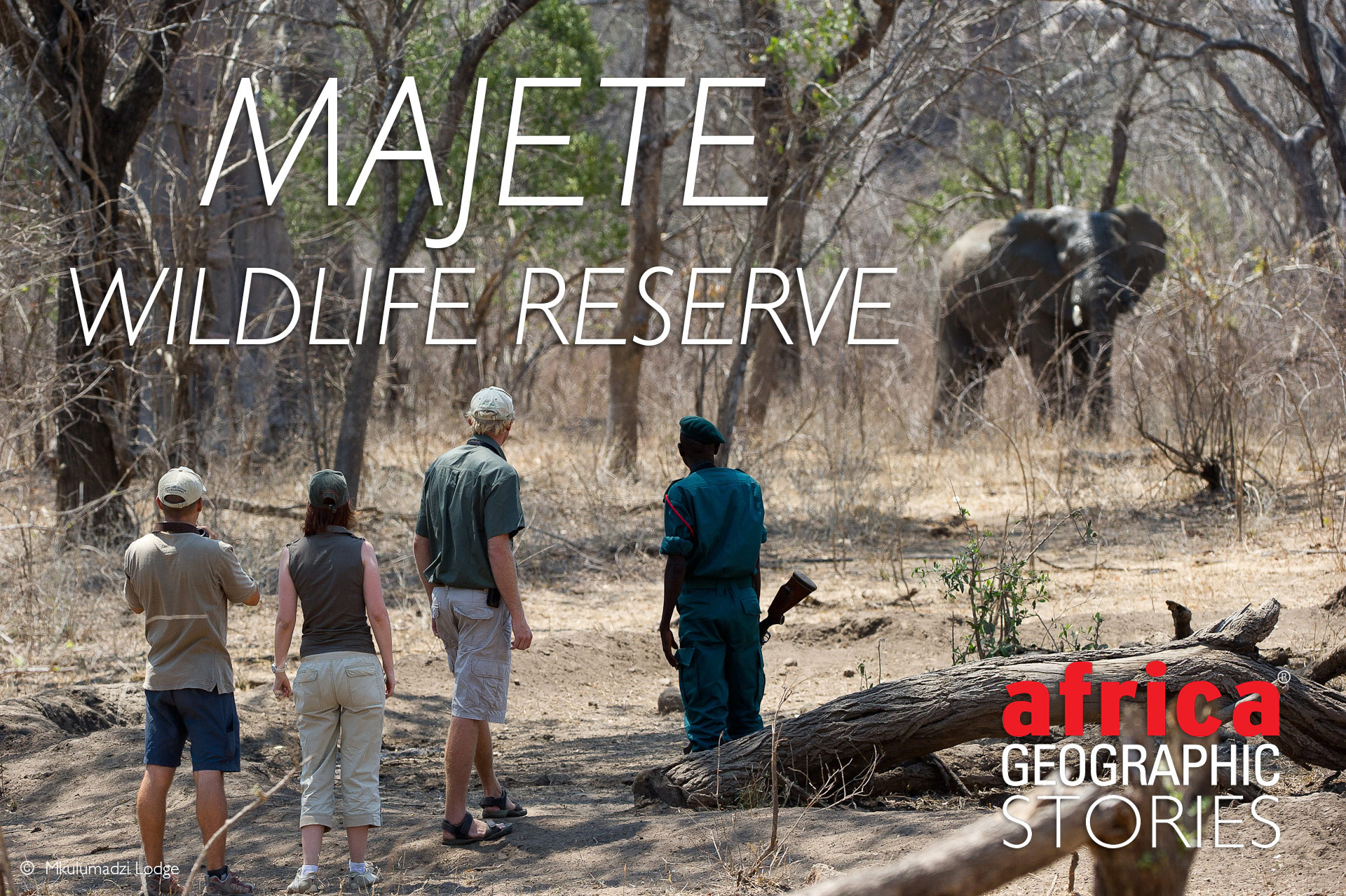 It’s been a long journey, and the guardians of the small crate and its precious cargo are exhausted. A pair of amber eyes gleam in the darkness, wary and burning with wildfire. The crate slides open, and in a blur of spots and tawny fur, the cheetah hurtles out into the wild of her new home – one of the first cheetahs to set foot in Malawi’s Majete Wildlife Reserve in decades. Her arrival is just one step in the delicate process of transforming this vital piece of Africa back into a vibrant and thriving wilderness.

Majete Wildlife Reserve has all the makings of a coveted safari destination, a reserve now afforded the opportunity to live up to its considerable potential. And two years after cheetahs returned to Majete, the first cubs emerged from a secret den, marking the dawn of a new era for the reserve. 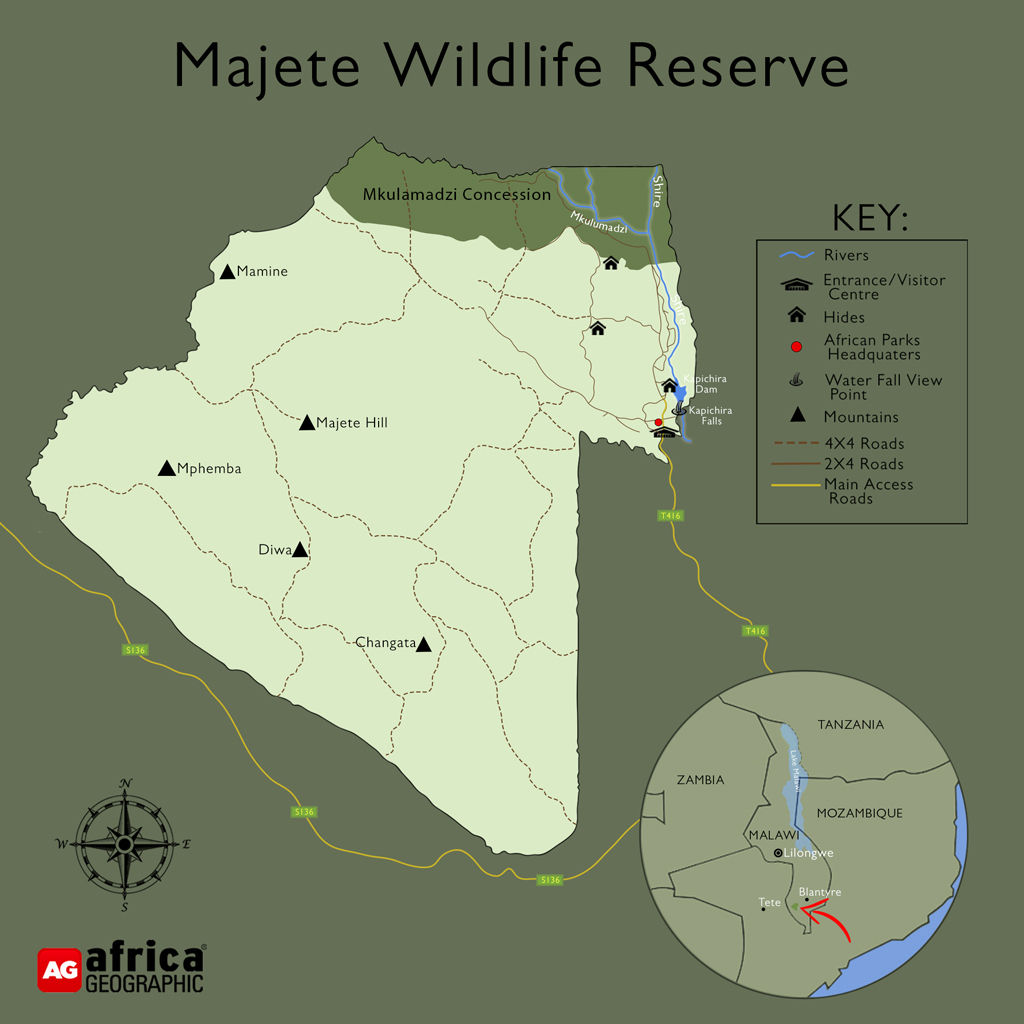 The reserve and Malawi’s wild spaces

In the Lower Shire River valley in Malawi’s southwestern corner, Majete Wildlife Reserve encompasses 700km2 (70,000 hectares) of towering granite hills, grassy plains, and miombo woodlands. Bulbous star chestnuts have forced their way up through the rocky kopjes, and hulking baobabs dot the savanna, while the riparian forests of the river valley are lush with ilala palms and ancient mahoganies.

Every river in Africa has its own distinctive character, and these landscape lifelines tend to dominate and define the continent’s wild spaces. So it is in Majete, where the two main rivers are entirely unalike. The Mkulumadzi is gentle and charming, flowing through patches of boulders and along small open floodplains. The more famous Shire is mighty, fast and deep (check out this footage of the capricious river after heavy rains), forcing its resident hippos and crocodiles to endure the currents. The Shire subsumes the smaller Mkulumadzi in the heart of Majete and continues south to tumble over the picturesque Kapichira Falls. Nearly two hundred years ago, David Livingstone and his crew followed the course of this river, which would eventually (after a detour around the falls) lead them to the shores of Lake Malawi. The Shire is the only outlet of Lake Malawi in the north and winds its way through Malawi before eventually joining the Zambezi River to the south.

Majete Wildlife Reserve was the first protected area to fall under the management auspices of African Parks back in 2003. Prior to that, the reserve was a reserve in name only. Charcoal burning and logging had divested vast patches of land of their woodlands, and poaching had claimed the lives of everything from elephants and rhinos to the once vast herds of buffalo and innumerable antelope species. Not one tourist had ventured to the reserve in three years.

After a lengthy negotiation, the non-profit organisation African Parks entered into a public-private partnership with the Malawi Department of National Parks and Wildlife (DNPW). As part of their now well-established (but then trailblazing) method, African Parks assumed responsibility for the rehabilitation and long-term management of the reserve while providing a source of sustainable income for surrounding communities. They inherited a “wasteland with no perceived value, and little to no hope for a revival”.

But revive it they did, in a careful and painstaking process that has taken close to twenty years. Rather than rushing into a hasty attempt to restock Majete, management teams established the necessary infrastructure and relationships needed to secure the reserve’s long-term future. As is fundamental to the African Parks’ approach, the first step was to institute community development and engagement programs to prove the importance of protecting the reserve. Fences sprang up around the perimeter, the road network was increased tenfold, and lodges, camps and a visitor centre were prepared for the inevitable return of the tourists.

The establishment of a smaller and more manageable inner sanctuary provided a safe haven for both the remaining and translocated wildlife to flourish. Meanwhile, the reserve’s team of 12 grew to over 140 well-equipped, well-motivated and well-trained staff members. In a remarkable testament to their efforts, not one elephant or rhino has been lost to poaching since their return to the reserve.

Tourists have begun to reappear in their droves, with 11,000 visitors generating more than USD 500,000 in revenue in 2019. Aside from the reserve running costs, this money is channelled into community education scholarships, social infrastructure such as clinics, malaria prevention, and bee-keeping projects.

Back from the brink

With remaining wildlife numbers on the rise and their safety ensured, the time had come to bring back the species lost to poaching. First came seven black rhinos in 2003, followed by elephants with the arrival of a herd of 70 in 2006 and additional herds in 2008 and 2009. Today a healthy population of elephants roam Majete Wildlife Reserve, fulfilling their role as ecosystem engineers and reversing the damage to the reserve’s habitats. Translocated giraffes, buffaloes, and sable antelopes all joined the ranks of a burgeoning herbivore population. Since African Parks took over management, more than 5,000 animals from 17 species have been brought into Majete.

Today the reserve is home to a multitude of antelope species, including waterbuck, eland, Lichtenstein’s hartebeest, common duiker, kudu, nyala, bushbuck, Sharpe’s grysbok and suni. With sufficient prey species on the menu, the large carnivores were next on the arrival list. Lions, leopards, cheetahs and, most recently, wild dogs have all made the journey from other countries (mainly South Africa – a trip of over 5,000km) to restore Malawi’s predator populations. These animals fall under the umbrella of the Malawi Predator Metapopulation Management Plan, allowing for an overarching management approach. Along with elephants and rhinos, they and their offspring have aided in the rewilding and genetic supplementation of other reserves around Malawi, such as the Nkhotakota Wildlife Reserve in the north of the country.
The gradual rehabilitation of Majete has also been of tremendous benefit to its avian residents (and migrants). Over 300 bird species have been recorded in the reserve. July to November marks the passage of a plethora of migratory bird species through the reserves, including African skimmers and diminutive rock pratincoles. For enthusiasts, Arnot’s and boulder chats, racket-tailed rollers, Pel’s fishing owls, cuckoo hawks, and Boehm’s bee-eaters are all highlights.

Selecting a safari destination is often a deeply personal decision, based on any number of different factors and requirements, from budget to wildlife viewing. One such motivating factor not to be overlooked or dismissed is the story of a reserve and the vital contribution each visit makes to its survival. Every tourist who arrives at this nascent reserve to learn (and retell) its story is an essential cog in the tourism-conservation machine.

They will also find themselves well rewarded by a piece of African paradise unspoilt by mass commercial tourism. This may not be the perfect destination for first-time safari-goers clutching a wildlife checklist, but seasoned travellers will revel in the low-key atmosphere, unusual scenery and unexpected joy of encountering wildlife once locally extinct.

The reserve is open to day visitors, but there are campsite and lodge options for those looking to opt for a longer exploration. The Mkulumadzi River and its lawn-like flood plains are well-suited to guided walking safaris, with the bonus of enjoying a well-earned lunch and swimming at the reserve’s Heritage and Education Centre afterwards. Boat excursions on the Shire River are also on offer. The reserve is open year-round but arguably at its best during the dry months from April until October, when the wildlife concentrates around available water. Majete can get very warm, with midday temperatures often exceeding 40 degrees Celsius and very humid conditions with the arrival of seasonal rains.

There could be no better description of the restoration of Majete Wildlife Reserve than a labour of love, born of twenty years’ worth of dedicated toil. In many ways, for African Parks, it set the stage for the future – a platform to trial new and innovative methods to protect the continent’s most vulnerable wild spaces and proof of just what can be accomplished. What’s more, Majete’s success became a springboard for Malawian conservation, echoes of which can be seen across the country’s other parks and reserves.

African Parks entered into management agreements for Liwonde National Park and Nkhotakota Wildlife Reserve, both in Malawi, in 2015.

For more about Majete’s cheetah translocations, see The Return of Malawi’s Cheetahs
The translocation of giraffes to Majete was a Malawian first: Malawi gains new giraffe population in Majete Wildlife Reserve