Lions are in trouble in Namibia

The giraffe was lying right on the track with an impressive male lion crouched alongside. It was a once-in-a-lifetime experience for me to see a fresh lion kill at such close range on the fringes of the Namib Desert in Torra Conservancy. A once-in-a-lifetime experience even for community conservation veteran Garth Owen-Smith, who accompanied us. Written by: Helge Denker There are 30 known lions in Torra, a communal farmland area, and over 150 estimated in Namibia’s northwest. This specific male’s pride is believed to consist of 14 individuals. The lions are relatively unbothered by vehicles and gave us a wonderful, intimate encounter. 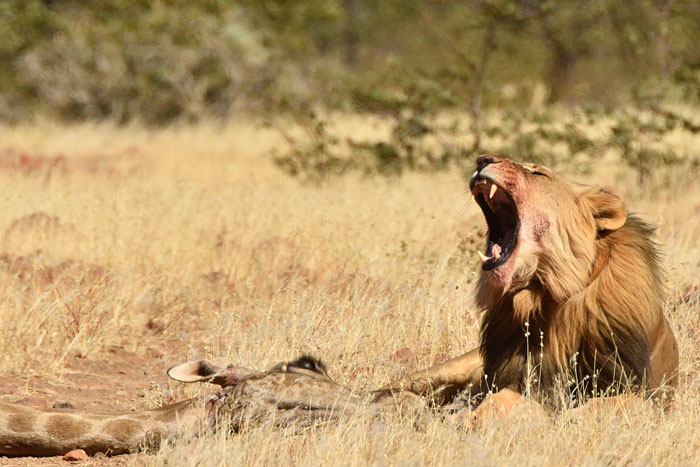 The conservation of these lions is hugely important in the face of rapidly diminishing global lion ranges and numbers. Once widespread, even across parts of Europe and Asia, lions today occur only in fragmented pockets across Africa, mostly in large national parks. However in Namibia lion range and numbers are expanding, at least for the time being. Current estimates indicate between 600 and 800 animals.

Yet Garth Owen-Smith is predicting real lion trouble for the northwest and says actions must be taken now to counter it. Garth saw lions starving at the end of the drought of the early 1980s when lion numbers – and drought conditions – were similar to what they are now.

Droughts can be a time of plenty for predators. Lions enjoy favourable conditions because wildlife is concentrated in the few areas where rain has fallen or around isolated waterholes. But game dispersal in search of grazing can also work against the lions, as it did in the early 80s, and will then bring them into increasing conflict with livestock. Today, significantly more people and livestock use the northwest than they did thirty years ago. Farmers trying to access sparse grazing are forced to move livestock into lion areas.

“People do not want to hear about lions, the lions have made farmers poor,” says Vitalis Florry. Talking with the Torra Conservancy field officer (and livestock farmer), it’s clear that the trouble is brewing. In the last two months, one horse, two cattle, three donkeys and 25 goats were lost to lions in Torra. Elephants demolished one of the three lion-proof stock enclosures built with donor funding to reduce conflicts last year. The others are working well, but such enclosures are costly and currently provide only localised relief for farmers facing lion troubles. Lions now range across some 25 conservancies, and the sentiments of communities are similar everywhere: the costs and dangers of living with lions outweigh the benefits.

Lion rangers are employed in several conservancies to help monitor lion movements and reduce conflicts. Their salaries are paid by conservancies, tourism operators and NGOs. But without remote tracking technology, monitoring lion movements in rugged terrain can be near impossible. While about a third of the adult lions have been fitted with transmitters, mostly by Dr Philip ‘Flip’ Stander as part of the Desert Lion Conservation Project, the early warning system that remote tracking could enable is currently not active. Funding and manpower are the main problems. Who pays for and maintains the tracking technology? Who sends out warnings to local communities? Flip Stander cannot do all of that alone. Conservation NGO Africat has taken this on in some conservancies but covers only a small portion of lion range.

Most rural communities want to see fewer lions. Actively zoning core wildlife areas helps. But wildlife moves, especially during times of drought. The northwest is marginal wildlife habitat and wildlife needs to wander and opportunistically use available resources to stay alive – for lions that includes the odd livestock meal. More must be done to reduce conflicts, but some will always occur and need to be offset by direct returns from lions.

Tourism is part of the long-term solution. Yet current tourism contributions are limited. Joint-venture lodges generate most of the returns for communities. Input from the mobile tourism sector is generally meagre. The TOSCO Trust (Tourism Supporting Conservation) is now trying out a system of conservation contributions in a few core areas to help address this.

Trophy hunting is making an important contribution, funding game guard salaries and other conservancy running costs, especially in the many areas where there is no tourism. Yet lion hunting is extremely controversial. Hunters are accused of always singling out prime males, skewing population demographics and upsetting pride structures. Desert Lion Conservation Project data shows that significantly more lions are killed by locals than by trophy hunters, without any returns. Targeted trophy hunting of selected lions could reduce lion troubles and generate significant conservation revenue. Yet poor practices by some operators reinforce the stigma, and around the globe, pressure is mounting to ban trophy hunting of lions altogether.

There is a new guard of concerned conservationists fighting the cause of the lions, and collecting funds for their conservation. The efforts are making an important difference, especially to research, but as long as they remain ad hoc, offer only short-term relief. If lions are to survive outside national parks for generations to come, more permanent funding streams need to flow directly into conflict mitigation.

Some compensation payments for losses are currently made under the Ministry of Environment and Tourism’s Human-wildlife Self Reliance Scheme. After initial start-up funding from the MET’s Game Products Trust Fund, conservancies pay compensation from their own income, reinforcing the importance of generating direct returns from wildlife.

The concept of wildlife incentives is now being piloted in a few conservancies. Local communities are encouraged to conserve predators (and other problematic species) through payments for wildlife sightings made by tourism operators. The idea includes securing funds from external partners to match tourism operator contributions and is being coordinated by the Natural Resources Working Group of NACSO. This may prove to be a vital, ongoing funding source – if it is embraced.

“Funding needs to be used effectively where it is most needed,” says Russell Vinjevold, who coordinates human-wildlife conflict mitigation for Integrated Rural Development and Nature Conservation and knows of the difficulties of accessing funds to actually make a difference in the field. “The problem is finding a lasting balance between the aspirations of people and the needs of wildlife.” 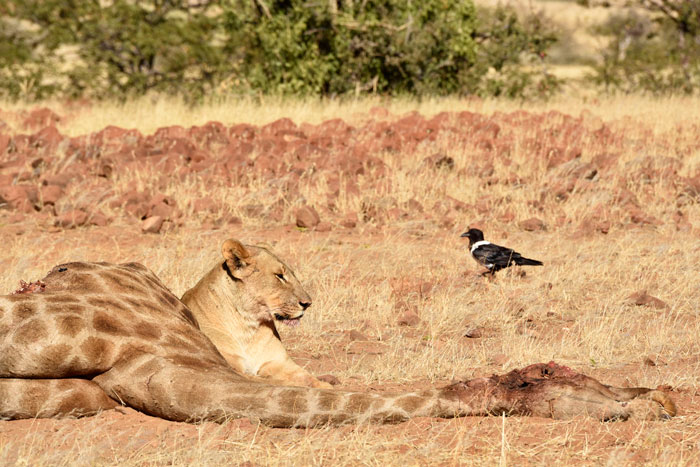 It all comes down to people and land use, more than money. Lions are dangerous predators that are difficult to live with. That’s why they disappeared from Europe and Asia long ago. That’s why their numbers are dwindling across Africa. That’s why they are not tolerated on commercial farmland in Namibia, why no one wants them ‘in their own back yard’. If we want communal farmers to put up with this threat to their livestock and their lives, we need real innovation. We need to stop talking about saving ‘the last of the desert lions’, because we can hardly expect more than 150 lions to coexist with people in the north-west. We need to listen to the people out there and help them live with the lions.