Posted on October 9, 2020 by Guest Contributor in the Opinion Editorial post series.
ShareTweetPinEmailShareShareLinkedIn 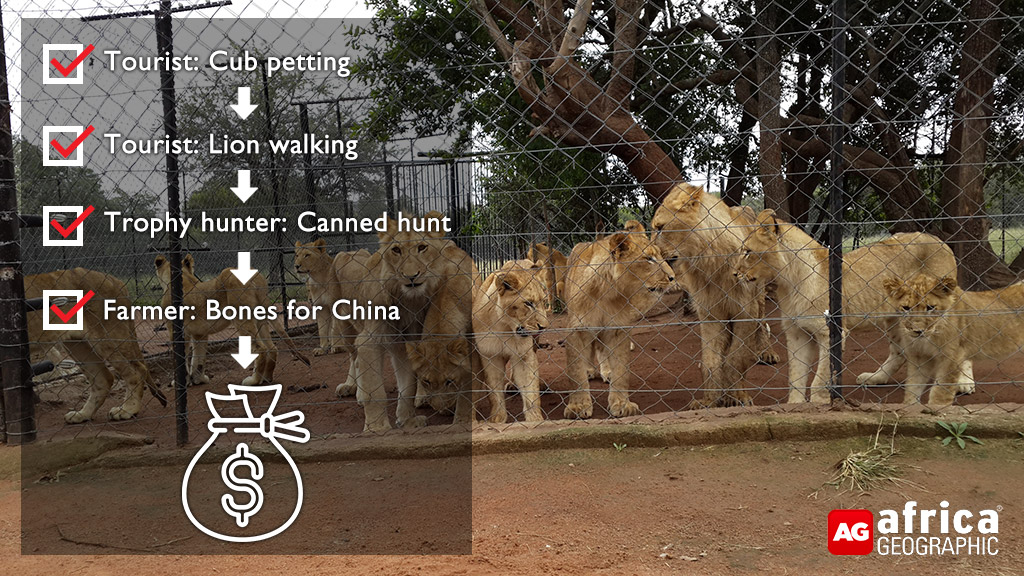 Presentation by Lord Ashcroft KCMG PC to the High-Level Panel examining the policies, legislation and practices related to the management of elephant, leopard, rhino and lion in South Africa.  Delivered on Wednesday, 07 October 2020.

Earlier this year, I sent each of you a copy of my book, Unfair Game, in which I expose the appalling truth about South Africa’s captive lion industry.

I have no doubt that you are all busy people, but I sincerely hope that you found some time to look at it.

If you did, you’d know that lion farming is a four-stage process. As cubs, these animals are taken from their mothers and used as tourist magnets. When older, they entertain tourists on “lion walking” excursions. Later, they’re shot in a “canned hunt” – a hunt in an enclosed space from which a lion cannot escape. Either that or they’re slaughtered for their bones and then stripped for their parts much as a thief might plunder a car. These bones are then sold for large sums of money in Asian wildlife markets.

Between being born and dying, some of these creatures are drugged and beaten to make them behave. They exist on a very limited diet. They carry diseases. They’re emotionally damaged. The abuse they suffer is unimaginable.

But it’s not just the appalling cruelty to the lions themselves that is harming South Africa’s reputation around the rest of the world.

The business of lion farming surely ranks as a prime example of how quickly profound wickedness can take root and then wreak havoc on a thing of beauty in a civilised country – a country that I love, by the way.

My research suggests there are now about 12,000 of these animals now being held in pens around South Africa. They outnumber wild lions by four to one.

These animals are bred in the name of profit. A lot of the money generated by these lions is the product of illegal activity, making these gains truly ill-gotten. In my opinion, this puts all of the beneficiaries of the captive-bred lion industry on a par with drug dealers.

In a world whose animal population is diminishing, and whose human population is growing, the problems associated with the lion industry are complex.

And yet, as my lengthy studies of this trade demonstrate, it really does seem that South Africa’s authorities have so far had no interest in tackling this hateful situation in earnest.

Arguably, the authorities have become the enablers of all of this, overseeing lion hunting regulations and awarding licences for the export of lion bones with what appears to be the lightest of touches and wilfully ignoring wrongdoing when they learn of it.

At the moment, this is largely restricted to South Africa. But once the international criminal syndicates have worked out how to create greater demand for the body parts of lions, wild lions right around Africa will become increasingly heavily poached – just like rhinos and elephants.

Then there is the health aspect to consider.

As my book shows, thousands of lion bones are smuggled out of South Africa each year to feed the Asian market for big cat products and so-called “traditional” medicines. Experts quoted in the book say a major public health incident will occur in Asia as a result of its people’s rampant consumption of lion bones – bones which are harvested in South Africa. It could be a serious infectious disease or a new disease we’ve never heard of, just like Covid-19. Lions also carry TB, which killed 1.5 million people in 2018. Any sense that South Africa failed to act when it had due warning would be disastrous for your people and their livelihoods.

So what can be done to solve this problem? I would urge you to recommend that the South African government bans captive-bred lion farming.

I would ask that you ensure airlines, shipping firms and freight companies operating in South Africa are heavily penalised if they are caught transporting the trophies or bones of captive-bred lions.

And ‘voluntourism’ holidays, lion cub petting and ‘walking with lions’ experiences must also be outlawed. Editorial note: Lord Ashcroft subsequently clarified that he was referring to voluntourism associated only with the lion-breeding industry, and NOT other forms of voluntourism.

One of the most shocking aspects of the recent investigation into lion farming that I launched was that when it ended, my team took their findings to a senior police officer in Pretoria who specialises in wildlife issues. Not only did he not read the evidence file they gave him, but having rejected it, he also threatened to put them in prison.

I don’t believe that the members of this panel hold this unsympathetic attitude. I am certain you know right from wrong.

I wrote Unfair Game because I wanted to help end lion farming in South Africa for once and for all.

I hope that you will all share this aim. I will help you in any way I can to bring about its demise.

Thank you very much.