Posted on July 8, 2020 by teamAG in the Opinion Editorial post series.

Q&A with Lord Ashcroft about the captive lion trade and his book ‘UNFAIR GAME.’

There can never be any reason or justification to breed lions for tourist cub petting and adolescent lion walking, canned/other hunting or the bone trade. This ugly, cruel, morally bankrupt and biodiversity-destructive industry has to be shut down. One man who is out there fighting to stop this industry is Lord Ashcroft – international businessman, philanthropist, author, and pollster.

Lord Ashcroft instigated a covert operation to investigate the captive lion breeding industry in South Africa, and this shocking video reveals some of his findings. WARNING:  the video contains harrowing footage that made our stomachs churn. Proceed with caution – you have been warned. Also to emerge from this exposé is Lord Ashcroft’s recently-published book ‘UNFAIR GAME – an exposé of South Africa’s captive-bred lion industry’ – a must-read for any serious wildlife eco-warrior. All author royalties will be donated to relevant charities in South Africa.

We spoke to Lord Ashcroft about the journey leading to this book.

How did you come to be involved in investigating lion breeding farms and canned lion hunting?

L.A: I have always loved nature, and South Africa is one of my favourite countries in the world. In 2018, during a trip to South Africa, I was told by various conservationists and experts about the scandal of lion farming and the horrors of canned lion hunting. I decided I had to find out more about this, so I launched an undercover operation shortly afterwards and then a second undercover operation – which my new book UNFAIR GAME details – to try to break it open.

What is your response to the claims by the proponents of lion breeding and canned hunting that, as farmed animals, these lions are essentially livestock and that the cruelty they are subjected to is no worse than that suffered by cows, sheep, pigs and goats when they are farmed throughout the world?

L.A: Lions are not livestock. They have never been and never will be livestock, whatever proponents of lion breeding and canned lion hunting claim. If lions were mere livestock, as opposed to being a creature revered throughout human history, why on earth does the South African state adorn South African banknotes with their image? Everybody knows that the lion is an internationally recognised symbol of strength and beauty. It has been acknowledged in this way for centuries in heraldry. Lions are indeed being farmed now on an industrial scale in South Africa, but this is a very new development. It’s mushroomed in the space of a generation. That doesn’t mean anything has changed regarding the status of lions in the minds of decent human beings. The willingness of unscrupulous people to farm lions doesn’t mean lions are anything like poultry or pigs or goats. Only somebody with a vested interest in exploiting a lion would try to justify their activities in this way and reduce a lion to the status of an organism that rolls off a production line.

Regarding the wild lions removed from Botswana to be used as breeding stock for the captive lion breeders, do your sources indicate that this is a widespread practice, or is it isolated to a few specific operators? Have you informed the relevant authorities of these goings-on, and has that resulted in any action on their part?

L.A: The information my team and I received suggests that removing wild lions from Botswana is now fairly commonplace. It is done out of necessity to widen the gene pool of the captive-bred lion population, which is often sickly. Because it is an underground industry, it is hard for anybody to be precise about this, but the poachers and hustlers seem to operate with relative ease. As to the second part of your question, my team did present a senior police officer in Pretoria with an extensive dossier of findings. He refused to read it and instead threatened to put at least one of my team in prison.

In your video, you touch on the justification used by lion breeders that they are supplying the existing demand in Asia for bone and that to remove the farmed supply would result in a massive upsurge in poaching incidents in wild lion populations to feed that market. Can you explain in more detail why you disagree with this reasoning?

L.A: I do disagree with the justification used by lion breeders that if they didn’t exist, there would be more poaching. Lion breeders always say their industry protects wild lions. In fact, the bone trade has done the opposite: it has established a market and a demand that has already harmed the wild population through poaching. This could, in future, have significant conservation implications. A market has been developed, and it must be fed, whatever the cost, even if that means plundering some of nature’s most precious species. This is a trade with links to criminals. It is indefensible.

The bone trade is appallingly grim. It’s also absurd. Who in their right mind would genuinely believe that consuming the bone of a big cat would improve their love life or their overall health? A major re-education programme is urgently required throughout Asia to root out this claptrap. It’s the only way to stamp it out.

You presumably went to considerable expense to rescue Simba and ensure his future. Research suggests that wild lion populations are declining at an alarming rate, not just in South Africa but throughout their remaining range in Africa – and many organisations devoted to protecting these wild lions are underfunded. Is there an argument that the money spent on saving one captive-bred lion could have been spent on efforts to save wild lions – or do you believe these causes to be separate issues, each as deserving as the other?

L.A: In deciding to save Simba, I reacted to a set of circumstances at the time. Simba was part of an undercover operation. Saving one out of a possible 12,000 captive-bred lions from certain death felt like a small but crucial victory in the war to end the captive-bred industry. This industry has been my focus, though I know that others focus on the wild population, and I applaud their efforts. In fact, as UNFAIR GAME makes clear, I believe that some tough choices lie ahead of us when it comes to what to do with the captive-bred population. Ultimately, it should not exist as a breed of lion. Some people will be shocked at this but euthanising all, or most captive-bred lions might be one solution. These are sad animals, bred to live miserable lives and then be killed. They can’t be re-wilded; they are often sickly because of inbreeding, and the expense of putting every captive-bred lion in a sanctuary would be prohibitive. There’s also a considerable risk that the trade would start again if this happened.

Lion breeding and hunting have been the subject of several shocking media exposés and reports, yet the practice continues. How can the average person help?

L.A: The lion trade starts as soon as cubs are born and taken from their mothers. These cubs are used as tourist magnets. So, a vitally important thing that people all over the world can do is cease having anything to do with cub-petting. Make it clear to anyone you meet that it is socially unacceptable to see lions anywhere other than in the wild and you should certainly never touch a lion either because they bite, scratch and carry all sorts of diseases. Lion cubs are often beaten or drugged to get them to behave in front of humans. When you think of all this, it doesn’t sound very attractive, does it?

Apart from the above, another way to help would be to buy my book (purchase details below) – 100% of the author royalties will be donated to relevant charities in South Africa. Reading and thinking about Unfair Game will empower you to know more and to be a better warrior for the cause as you spread accurate information to your networks.

Please feel free to offer further insights into the situation.

L.A: Lion farming is a terrible business. Behind the veneer of respectable tourist establishments, lions are being exploited at every stage of their lives for profit. The lion trade has clear links to international crime syndicates. All of this is appalling. But so is the risk of disease to humans that the lion trade poses. Farmed lions have weak immune systems. As they get older, they are subjected to a poor diet. All of this heightens their risk of bacterial infection. Anyone who goes near a lion is exposing themself to sarcoptic mange, ringworm, toxoplasmosis, babesiosis, giardiasis, cysticercosis, E. coli and echinococcus hydatid cysts – potentially fatal tapeworms.

But there is more. It is widely understood that Covid-19 originated in a Chinese wildlife market and spread around the world. Because of the big cat bone trade in Asia, of which South Africa is now a considerable part, experts quoted in my book say a major public health incident will occur in Asia as a result of its people’s rampant consumption of lion bones. It could be the infectious disease brucellosis, or botulism, or a new disease, like Covid-19. TB is also a massive risk.

I hope this, if nothing else, persuades everybody of the evil of lion farming. 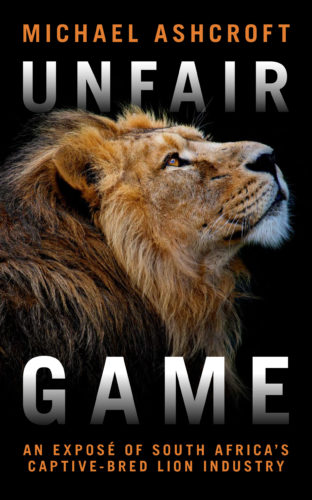 Buy UNFAIR GAME online at Amazon or Biteback Publishing or from your local book retailer. Printed editions will be available in South African bookshops from 15th of July. 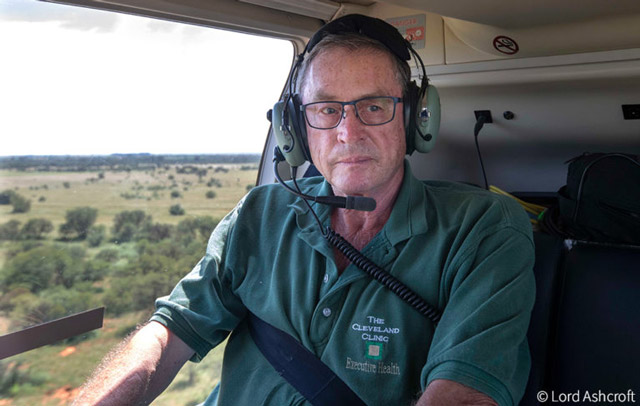 Lord Ashcroft KCMG PC is an international businessman, philanthropist, author, and pollster. He is a former treasurer and deputy chairman of the UK’s Conservative Party. He is also honorary chairman and a former treasurer of the International Democratic Union. He is founder and chairman of the board of trustees of Crimestoppers, vice-patron of the Intelligence Corps Museum, chairman of the trustees of Ashcroft Technology Academy, chancellor of Anglia Ruskin University, a senior fellow of the International Strategic Studies Association and a former trustee of Imperial War Museums. His books include Victoria Cross Heroes: Volumes I and II; Call Me Dave: The Unauthorised Biography of David Cameron; White Flag? An Examination of the UK’s Defence Capability and Jacob’s Ladder: The Unauthorised Biography of Jacob Rees-Mogg.