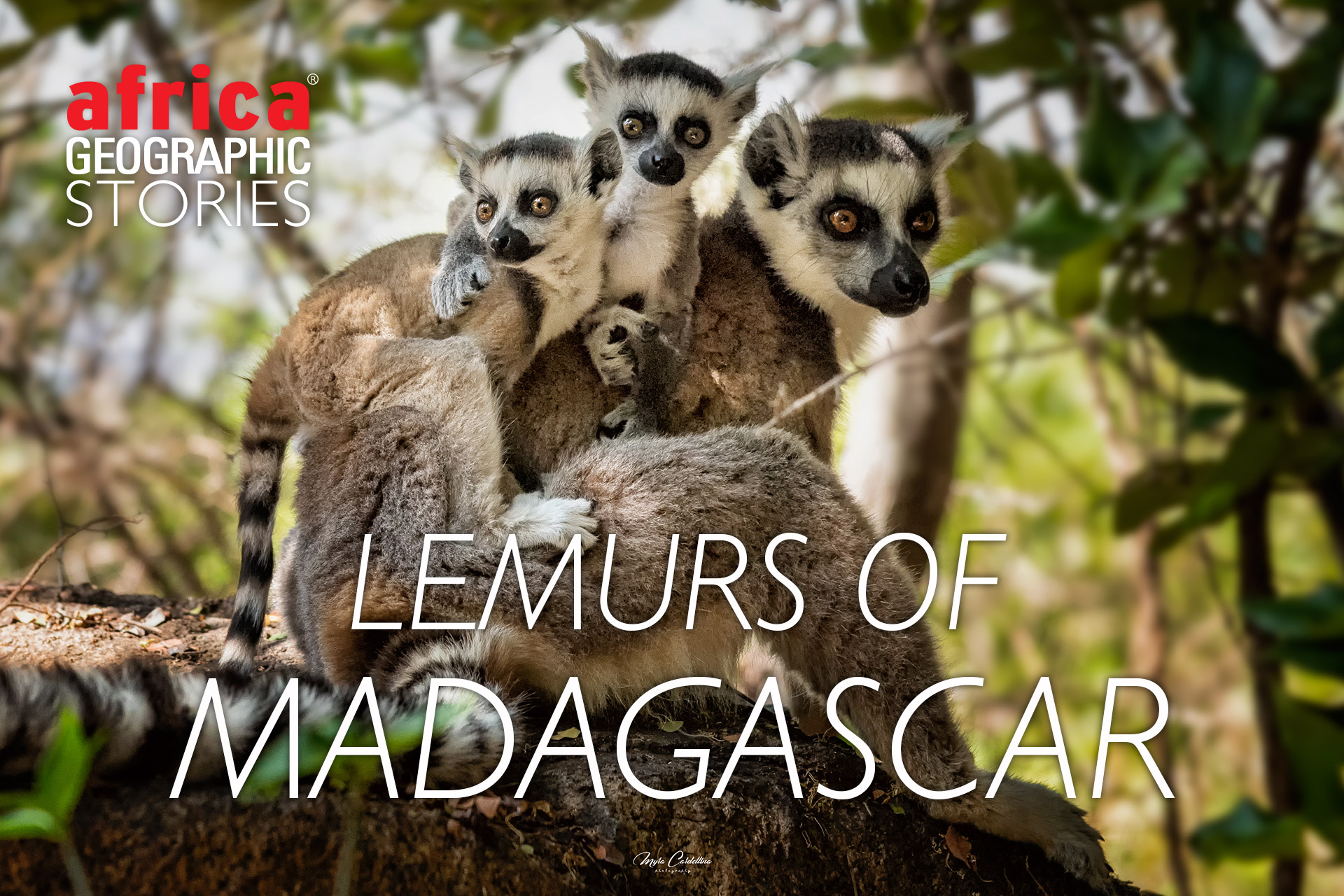 Some 135 million years ago, gradual but enormous forces broke apart the supercontinent Gondwana, and a landmass consisting of present-day Madagascar, India, Antarctica, and Australia drifted away from Africa. Then, around 47 million years later, Madagascar broke away from India and settled itself off the coast of Africa in the Indian Ocean. For the last 88 million years, life on Madagascar has been on its own, an island of evolutionary oddities that includes the family of lemurs.

The inevitable outcome of this geographic isolation is that 90% of the island’s fauna and flora are endemic, with phenomenal biodiversity that is quite literally worlds apart for anything else on the planet. The island is so large, and its environment so diverse, that some have even argued that it should be considered the world’s eighth continent. The island is home to over 300 recorded species of birds (60% of which are endemic) and 260 species of reptile – including two-thirds of the world’s chameleon species. Yet it is the primate species of Madagascar – the lemurs – that are the island’s real “flagship” species.

The IUCN currently recognizes 107 species of lemurs, but their classification is an ongoing process that incorporates new knowledge and research on a regular basis. The lemurs of Madagascar have evolved with the island, influencing the plant life, and filling every available niche to for an astoundingly diverse superfamily of multitudinous shapes and sizes.

Where did they come from?

Unravelling the history of the animal occupants of Madagascar has proved somewhat complicated for scientists because, despite the existence of various dinosaur fossils, there are almost no fossil records from around 66 million years ago to about 26,000 years ago.  However, through a series of complex genetic studies, researchers believe that rather than already being present when Madagascar broke away, the ancestors of modern lemurs arrived sometime after it achieved its geographic isolation, probably between 50 and 60 million years ago. Since then, the family has evolved in a wide variety of diverse primates whose closest relatives are bushbabies (galagos), lorises and pottos.

The most popular theory is that early lemurs exist due to “sweepstakes dispersal” – a chance event that allowed an animal species to cross a massive geological barrier, in this case, the Mozambique channel. At some point, the lemur ancestors (which likely would have been relatively small) found themselves adrift at sea on a raft of plant material, perhaps due to a severe tropical storm or flood. Recent evidence indicates that ocean currents at the time moved towards Madagascar and the island itself would have been slightly closer than its current position, making the journey relatively easy to survive for a small primate, especially one that could have entered a state of torpor.

This particular theory is, however, far from universal and it is the aye-aye (see below) that has caused some of the controversies, as jawbones found in Africa (from a species known as Plesiopithecus) bear a very close resemblance to aye-aye morphology.

Assuming the early lemurs did arrive by raft, once they disembarked they set about colonizing their new home; breeding, adapting, and evolving into the many different species seen today. The lack of mammal competition allowed them to fill several open ecological niches, though the harsh climate of Madagascar shaped this evolution to include several shared traits such seasonal fat storage and strict breeding seasons (for all but two species).

While their classification is as controversial as their history, the consensus is that there are now five extant families of lemur: the Cheirogaleidae (the dwarf and mouse lemurs), the Daubentoniidae (the aye-aye is the only living representative), Indriidae (which includes the indri, woolly lemurs and sifakas), Lemuridae (which includes the “true” lemurs, the ring-tailed lemur, the ruffed lemurs and bamboo lemurs), and Lepilemuridae (sportive lemurs). The largest of these is the indri, which can weigh up to 9.5kg, and the smallest is the critically endangered Madame Berthe’s mouse lemur, which weighs around 30g.

Astoundingly, however, just 2000 years ago, there were three other families of much larger lemur species: the Arcaeolemuridae (monkey lemurs), Megaladapidae (koala lemurs) and the enormous Palaeopropithecidae (sloth lemurs). The largest of all lemurs was a member of the sloth lemur family, a species known as Archaeoindris fontoynontii or “giant sloth lemur”, which probably reached a mass of 160kg and was roughly the size of a small gorilla. While there is no conclusive proof as to why these larger lemur species died out, their disappearance coincides with the arrival of the first humans on Madagascar.

All in favour say aye (aye)

By and large, the lemur species are extremely attractive creatures, with thick fluffy coats and striking colouration. The aye-aye could be considered the exception to this particular rule – it looks a little like a creature created by an overly-imaginative fantasy writer. Unfortunately for this entirely harmless and unassuming creature, its strange looks have inspired several supernatural and superstitious beliefs. The local myths around the aye-aye suggest that it is a harbinger of evil, occasionally sneaking into people’s houses to stab them in the neck with its absurdly long finger. The unfortunate result is that the aye-aye is often judiciously killed on sight, which may well account for the extinction of its cousin, the giant aye-aye.

In reality, the aye-aye is Madagascar’s woodpecker (no, really). The tiny third finger, which has a ball-and-socket joint, is used to tap on the bark of trees, and the aye-aye listens to the resonance to locate the insect life within. Once it has struck it lucky, the aye-aye nibbles away the bark and uses the extended fourth finger to fish out the insect larvae. A sixth digit has evolved as a pseudo thumb to help the aye-aye keep its balance while feeding. This oddball design, coupled with continually growing incisors, has made the classification of the aye-aye a contentious subject but as technology has developed, it has become clear that aye-ayes are, in fact, the oldest of all living lemur species, the basal family. There are, however, biologists that contend that aye-ayes colonized Madagascar during a separate event to other lemur ancestors.

Lemurs rival any other primate family in terms of diversity, and this translates into many different shapes, sizes, behaviours, dentitions, diets, and habitat usages. 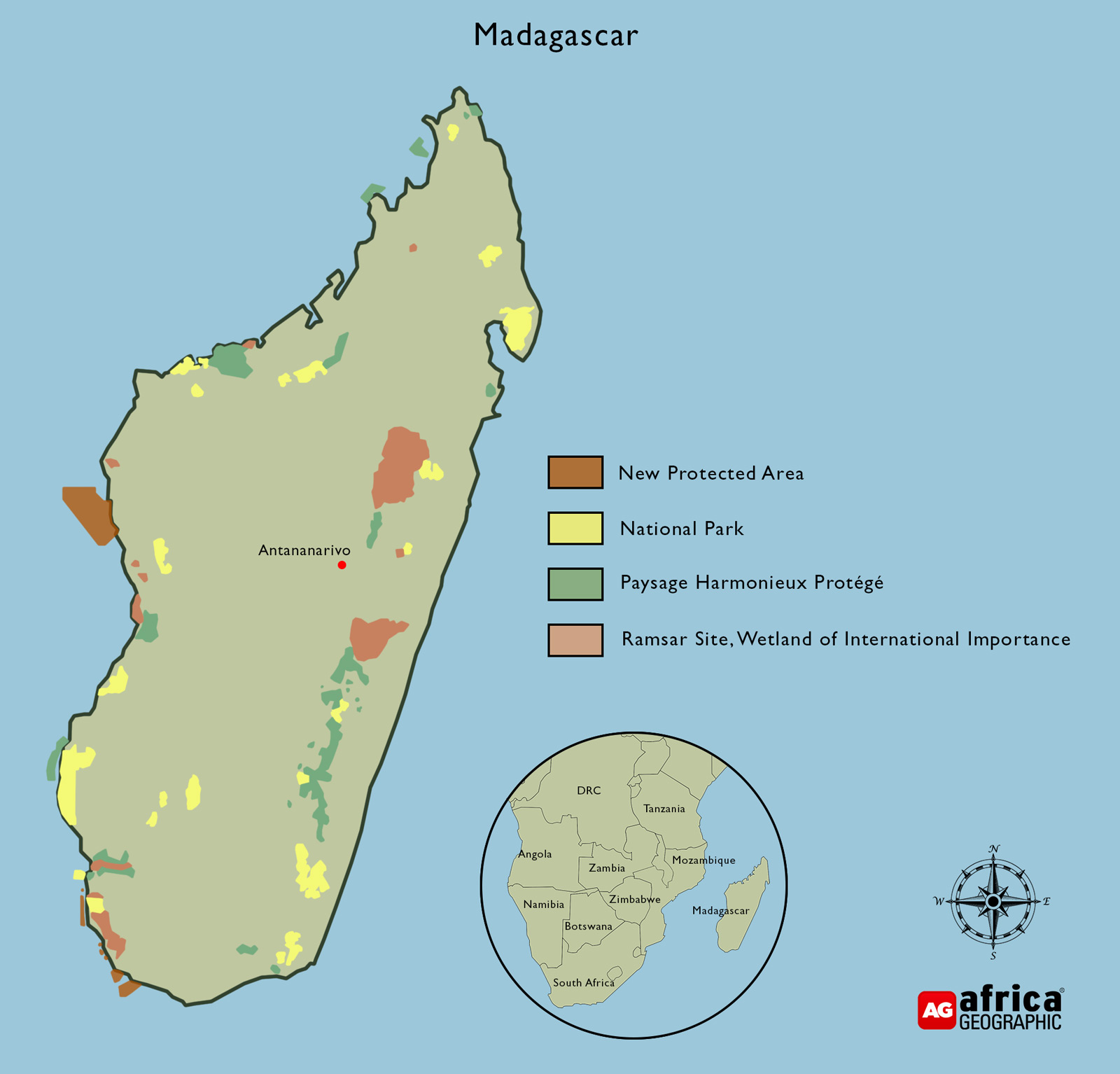 As fast as new lemur species are being described, so their conservation status becomes more precarious. Some may even go extinct before scientists identify them as a separate species. Where once the lemurs were found throughout Madagascar, they are now believed to be restricted to less than 10% of their original distribution. Due to slash-and-burn agriculture and deforestation, lemur populations are now forced into highly fragmented patches of ever-shrinking forest (Madagascar has lost more than half of its forests in the last 60 years). This, coupled with bushmeat hunting and the illegal pet trade, makes lemurs one of the most at-risk animal families on the planet. In a recent announcement, the IUCN revealed that 31% of all lemur species in Madagascar are now listed as critically endangered, and 98% of them are threatened in some way.

Since the arrival of humans on Madagascar, all mammals over 10kg (including a pygmy hippopotamus species) have gone extinct, as have unknown numbers of bird and reptile species. Ring-tailed lemurs still give off a false alarm call for the long-extinct Malagasy crowned eagle, which once would have been one of their main predators. Despite extensive conservation efforts from dedicated individuals and organizations, Madagascar is one of the poorest countries in the world, and only 3% of the island’s land area is protected. Without severe and immediate intervention by the international community, it is a sobering reality that the haunting calls of lemurs echoing through Madagascar’s forests may be silenced forever.

Bamboo  lemurs on the brink, driven by climate change