Posted on July 29, 2020 by teamAG in the Decoding Science post series.
ShareTweetPinEmailShareShareLinkedIn 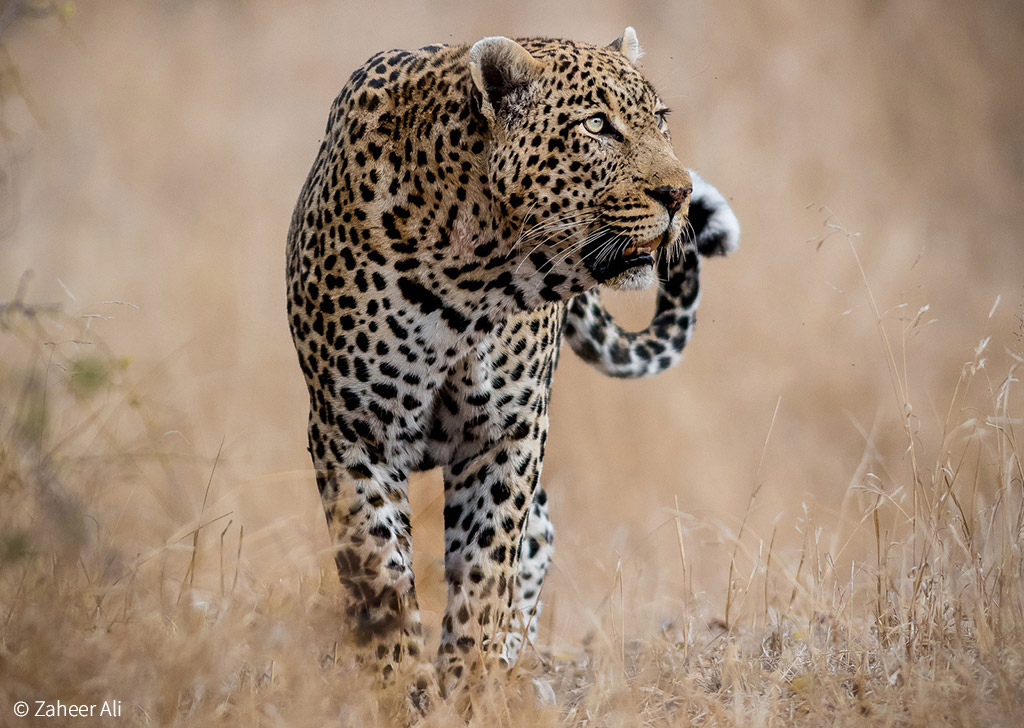 While disturbance by humans is known to result in declines in leopard populations, there is also significant evidence to suggest that it also results in demography changes to age, sex and social structure of populations. This can have a substantial impact on the health and viability of a given leopard population. In a new study, researchers set out to investigate the long-term effects of anthropogenic mortality in leopards and demonstrate that in areas where people have persecuted leopards, sub-adult male dispersal was reduced, encouraging opportunistic male natal philopatry and the potential for increased inbreeding.

Under normal conditions, it is typical for leopards to exhibit female philopatry. That is, females establish territories close to their natal range once they reach adulthood, while males typically disperse to avoid competition and conflict with larger, territorial males. This reduces the likelihood that the males will mate with a related female. To investigate the effects of anthropogenic mortality on these typical behaviours, researchers compared two reserves in South Africa with similar leopard densities and habitats but vastly different conservation histories.

The first was the Sabi Sand Game Reserve (SSGR), which is a privately-owned conservancy in Mpumalanga province, and part of the Greater Kruger. The SSGR covers 625km² (62,500 hectares) to the west of Kruger National Park and south of Manyeleti Game Reserve – there are no fences between these protected areas. Leopards typically do not leave the boundaries of the SSGR, nor are they hunted there, and human factors have caused less than 2% of leopard deaths since 1975. In contrast, the Phinda-uMkhuze Complex (PMC) consists of Phinda Private Game Reserve (which was established in 1991) and the public uMkhuze Game Reserve, which together form contiguous wilderness of 660km² (66,000 hectares). The boundary fence surrounding the PMC is permeable to leopards, allowing them to move onto unprotected land and uMkhuze, in particular, has suffered from high levels of wire-snare poaching. As a result, over 50% of leopard deaths in the area from 2002-2012 were caused by humans, and before that period, the numbers may have been higher. Policy changes established in 2005 resulted in the recovery of the PMC leopard population to levels now considered to be around the putative carrying capacity of the area. 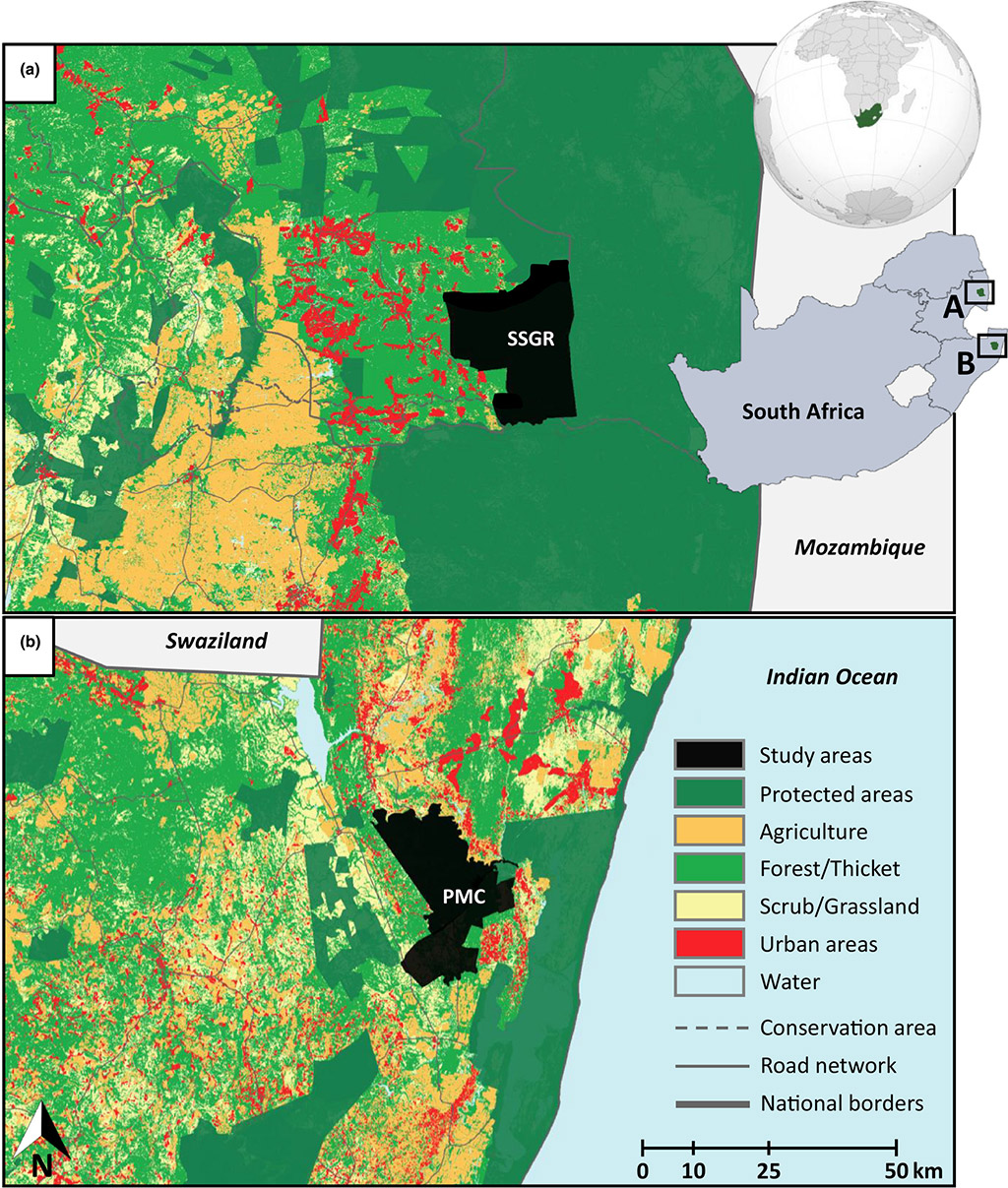 Through a combination of direct observation of individuals (often through data collected by local tourist guides in the area), tracking collars and telemetry, and DNA analysis of scat samples, the authors examined both the demographic and genetic differences within these two populations to investigate the long-term effects of human interference.

For both leopard populations, mothers shared over 50% of their home-ranges with their daughters, clearly exhibiting female philopatry, which was expected to be the result. (However, unexpectedly, 30% of daughters appear to have dispersed in the SSGR, which the authors postulate may be an example of density-dependent female dispersal due to the area having reached its carrying capacity.) Concerning the males, no young males established territories in their natal range in the SSGR – also to be expected in a species that uses dispersal as the primary mechanism in maintaining gene flow. In PMC, however, 22% of males established territories that overlapped with their maternal home-range, which suggests that their dispersal patterns have been disrupted. This was further supported by the genetic analysis, which indicates a population-level male kin-clustering in PMC, which the authors believe to be the first documentation of this phenomenon in a large solitary cat. 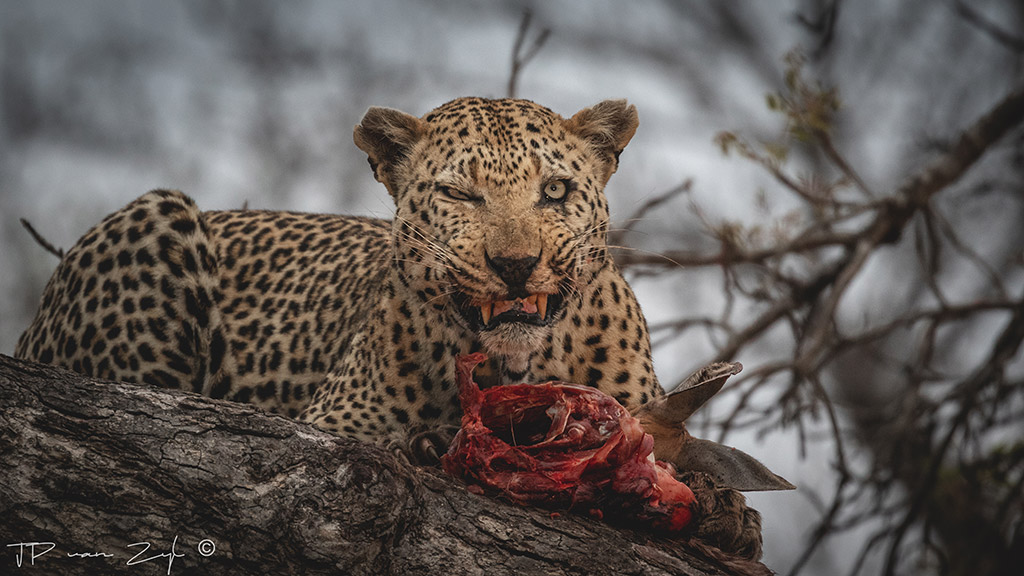 A male kin-clustering off this nature inevitably increases the opportunities for inbreeding, which was the case in the PMC with father-daughter and half-sibling breeding pairs observed. The researchers suggest that historically high levels of anthropogenic mortality promoted these opportunities, which translate into significant population-level inbreeding. They point out that while increasing leopard density may well correct male dispersal patterns, this will not rectify what they describe as “genetic scarring”. They also emphasize that what might be considered as “sustainable mortality” on a purely numbers-based assessment (i.e. trophy hunting quotas) could result in similar demographic disruptions. Thus, they emphasize the importance of managing and mitigating the effects of unsustainable exploitation – whether due to legal trophy hunting, poaching, wire snares or conflict with farmers – through promoting population recovery and providing safe corridors to maintain genetic connectivity.