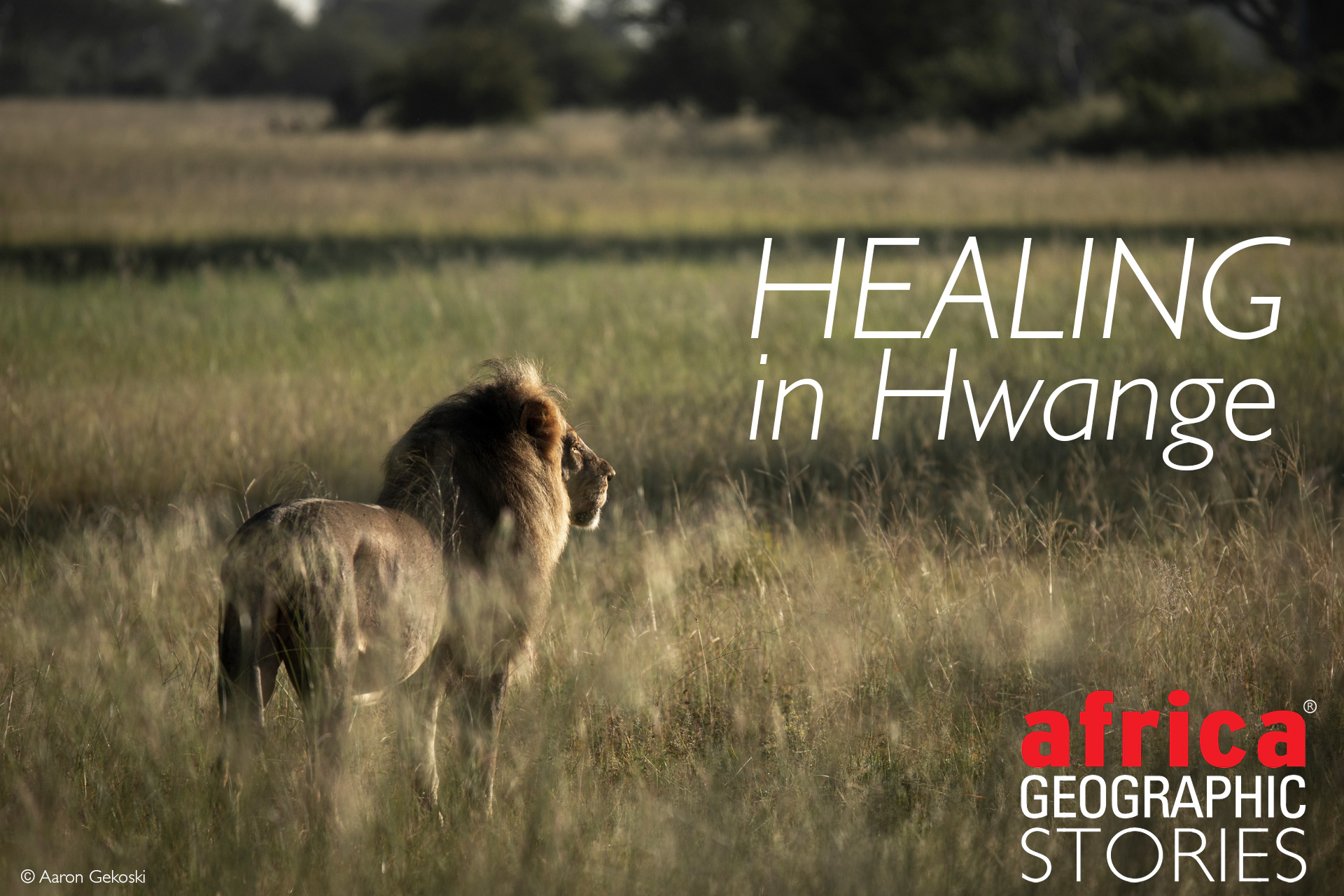 We all have our own ways of dealing with stress. Some speak to professionals or pop pills. Others release endorphins via exercise or yoga, and meditate themselves into a state of zen-ness. Hippocrates prescribed a dose of greenery. “Nature,” he said, “is the greatest physician”. Whilst it’s unlikely that Hippocrates ever went on an African safari in Hwange, his words still ring true today. But many are discovering this great secret: the art of healing through safari. A safari is a cathartic experience, with lions or elephants playing the part of therapists, prowling their way deep into our psyche, stomping out negative thoughts (at least temporarily, anyway).

The pandemic blindsided us and brought challenges we didn’t see coming and never thought possible. We were isolated from each other, from travel, and for many, from the natural world. As we start life in a post-COVID era, can we find solace amongst the animals? I headed to Zimbabwe to find out.

A dose of the good stuff

For the past 13 years I’ve worked as an environmental photojournalist and filmmaker, covering stories of human-animal conflict. In the process I have witnessed the best – and the worst – of humanity. I had lived in Africa before – in Mozambique, South Africa and Zanzibar – and as the pressures of a few years of gruelling work began to weigh on me, I longed for the continent.

I missed the smells of a savannah after a heavy rainstorm and those dense, brilliant night skies. I daydreamed of wild, open spaces packed with wildlife, and sitting around a campfire chugging whiskey, listening to stories of lives spent in the bush.

As travel opened up in the post-pandemic world, I decided it was time to test out Hippocrates’ theory, and in March my girlfriend Marie and I set off for Zimbabwe from our home in the Philippines. At first, we were unsure of visiting during green season (the rainy months between December and April). But a good buddy, Mark Butcher (aka ‘Butch’), who runs a few lodges in Zimbabwe – one of which  (Bomani Tented Lodge) I added to my itinerary – reassured me that green season meant relaxed animals due to an abundance of water and food, and fewer tourists.

After four flights we arrived at Bulawayo Airport a little bleary-eyed, to be greeted by Phil and Sharon Stead, owners of Amalinda Safari Collection. From here it was a 45-minute drive to Amalinda Lodge in Matobo National Park: the first stop on our three-week tour.

The Matobo National Park is found in the Matobo Hills, a UNESCO World Heritage Site, and is the oldest national park in Zimbabwe. And it might be one of the most romantic destinations on Earth. Every part of Amalinda Lodge pays homage to Matobo’s giant granite domes. We ate amongst them, slept next to them, swam on top of them, and went on game drives with them as the backdrop.

The Matobo Hills also house one of Africa’s rhino conservation success stories and provide impressive tracking encounters. On our first morning, we came within 5m of a pair of white rhinos, as our guide Howard – aka the “rhino oracle” – explained how rhinos here are flourishing due to intensive anti-poaching efforts.

Back at the lodge that evening, we made our way up to a vantage point with Sharon, Phil and a couple of bottles of Champagne. As the sun set over Matobo’s two-billion-year-old hills, I knelt down on one knee, pretended to pull a drone out of my bag, and whipped out an engagement ring for Marie instead. She said “yes”. It had been quite the first day in Zimbabwe.

The next couple of days passed by, a heady mix of celebrating, spending time with rhinos, and enjoying our honeymoon suite. We even found time to visit the grave of Cecil John Rhodes, set on top of a mountain with sensational views. Ending on a high, we packed our bags and headed on the next leg: to Bomani Tented Lodge, in Hwange National Park.

Bomani, Bigboy and the Baggage Handlers

Upon arrival, it turned out that Butch was true to his word: we did indeed have the entire place to ourselves. Bomani is situated on a 2000-hectare private reserve: visitors have virtually no neighbours aside from the animals that regularly visit the waterhole in front of the lodge. Bomani has a real family atmosphere and we were made to feel at home by the lodge manager, the charismatic Bigboy, and our guide, Ndaba.

Whilst enjoying a cup of coffee over the campfire with Butch at 5am, mist dispersing around the lodge, a golden blur caught Butch’s eye. It turned out to be the lion Lesang (pictured in the main image of this story), son of renowned lion Cecil, a magnificent specimen who was on the lookout for a mate.

Lesang is one of many lions that roam locally, along with a grizzled coalition known as ‘The Baggage Handlers’ (so named because they once raided the luggage of a charter aircraft on the runway to get to some vacuum-packed fillet steaks). On a couple of occasions, we were fortunate to see them with kills.

During the many coffees shared with Butch and the Imvelo team, I learnt of some of the ways they are contributing to the surrounding community, including building schools, creating employment, providing water and assisting with healthcare. They have recently been involved in an ambitious project to bring white rhinos back to Hwange. What makes the initiative so exciting is that rhinos are being reintroduced onto community land, where community members become custodians and benefit from tourism through increased employment.

Shortly after our trip, Butch and the team were busy preparing the rhinos for their trip to Hwange. Once in Hwange, they will enter into the care of the ‘Cobras’ – an anti-poaching group selected from the community and trained by Imvelo. Having seen the Cobras in action, it looks like the rhinos will be in safe hands.

A short drive from Bomani leads to Ngamo Plain – a wide-open savannah filled with the who’s who of safari. On a single morning, Butch showed us lion, cheetah, elephant, zebra, buffalo, wildebeest, waterbuck and a lot more.

Waving goodbye to the team from Imvelo, we headed north to Khulu Bush Camp in the north-eastern section of Hwange, to meet up again with Sharon and Phil. The lodge is a mirror of Sharon: elegant, stylish and beautifully put together.

Khulu is famous for its deck and plunge pool, where one can view elephants gathering at a large waterhole to drink. Sitting there with a gin and tonic in hand, we received news that a lioness and her cubs were feasting on a kudu close to the lodge.

Another highlight of our stay was hiding under a platform at neighbouring Ivory Lodge, where the elephants would congregate. Crouching with my camera, mere inches away from their trunks, made me sweat in places I didn’t know I could sweat. Shooting from this close with a wide-angle lens provides an intimate insight into elephant herds that telephotos can’t.

The Amalinda Collection also has its own conservation body, the Mother Africa Trust, which aims to empower local communities around Hwange and Matobo. Sharon took us to some of the lion bomas funded by the trust, which protect cattle from predators. Mother Africa has also been involved in building schools and has a dedicated anti-poaching unit.

While we were at the homestead, we met a man who had been injured by a bull elephant a few years ago and now struggles to walk. For many here, supporting family brings daily battles. One misplaced step and treasured cattle could be killed or worse – human life can be lost. The daily stresses I had come to Hwange to escape paled in comparison to the true grit I witnessed here.

A trip to Africa – experiencing its raw realities and overwhelming biodiversity – brings a true sense of perspective. We left Zimbabwe humbled, thrilled, exhausted, and with renewed energy and appreciation for our natural world. For those wanting to deal with demons, there’s nowhere quite like it.

The annual wildlife count in Zimbabwe’s Hwange National Park is a wonderful citizen-science project for all. Tony Park tells his story.

Aaron Gekoski is a filmmaker, writer and photographer (both land and underwater). He specialises in raising awareness on the plight of threatened species and writes for over 30 publications worldwide. Aaron has recently covered the trades of shark finning in Mozambique, lion hunting in Zimbabwe, seal culling in Namibia, manta ray fishing in Indonesia, and Madagascar’s ‘tortoise mafia’. For more information please visit his website or head to his conservation film and media company.