Most often we see hippos lazing in the water with the tips of their ears and eyes poking out and the occasional spout of water as they take in their next breath. But a bunch of us working in the safari industry in Botswana discovered another side to these animals while on a weekend away in Hwange National Park in Zimbabwe. Written by: James Wilson and Tim Frayne

After an exceptional shortage of rain during the wet season, the heavens opened for two consecutive days in April. After waiting the whole morning for the downpour to subside, we realised that we were waiting in vain and decided to pack a lunch and set out for one of the many game viewing hides strategically placed above a waterhole.

What transpired was a scene like no other – none of us had ever experienced such a thing.

As the rain continued to pour it became apparent that a mother hippo (separated from the pod) was suckling her newborn calf. On closer inspection, we could see that the hippo calf was no more than a couple of days old and had not yet been introduced to the rest of the pod. The mother usually isolates herself from the pod to give birth and slowly introduces the calf when she feels ready. Fortunately, we arrived at the very moment she revealed her calf to the pod – a special experience. Slowly the hippo mother made her way out of the water to the edge of the waterhole. Almost instinctively other members of the pod inquisitively made their way to the water’s edge. Three or four members of the family actually came out of the water and proceeded closer to the mother and calf. While the mother was protective of the calf she made no obvious attempt to keep the other hippos from coming too close as it wobbled precariously during its first steps on land. For no apparent reason, the mother began backtracking and quietly returned to the water while the other hippos that came to inspect the newcomer also backtracked to the water.

Something was about to go down.

What ensued was a scene of complete chaos that none of us expected after such a touching family moment. As if the incessant tapping of the raindrops on the tops of their heads had caused them to lose all sense of control, they attacked the mother. Three adults launched themselves towards her and sent her fleeing for safety into the deeper water of the waterhole.

After this battle, the calf was left stranded on the other side while the hippos continued to target the mother. After about two minutes of the mother defending herself and the deafening grunts and groans of the fight, things began to settle down again. Suspecting the hippo calf might be in trouble we watched as a few adult hippos cornered the mother on one side of the waterhole while about seven hippos began moving in on the calf. We’ve seen dominant bulls attack younger male hippos that may pose a threat to their dominance, but here both males and females seemed to have a collective plot to attack the calf.

Chaos ensued once more as they simultaneously lunged for the helpless calf and flung it into the air. This set off the rest of the pod and the scene turned to carnage, the small waterhole becoming a whirlpool of blood and drama. The mother watched helplessly as the entire pod attacked and slaughtered the calf. Each adult fought for an opportunity to attack the calf, pulling it from one side of the waterhole to the other. 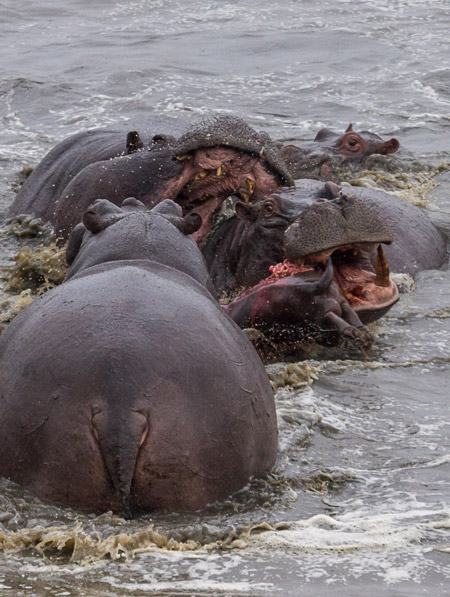 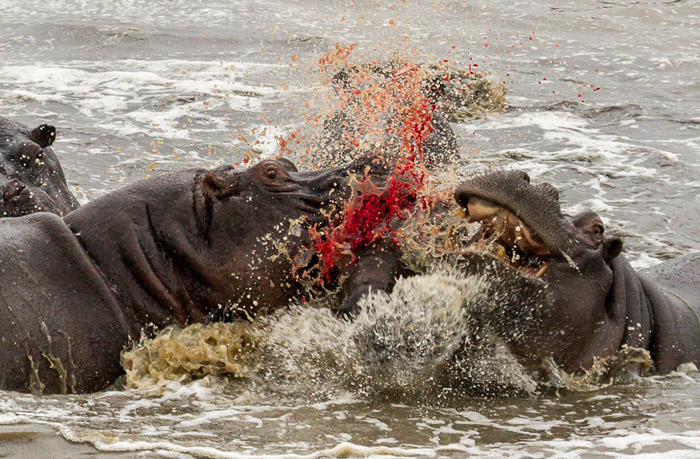 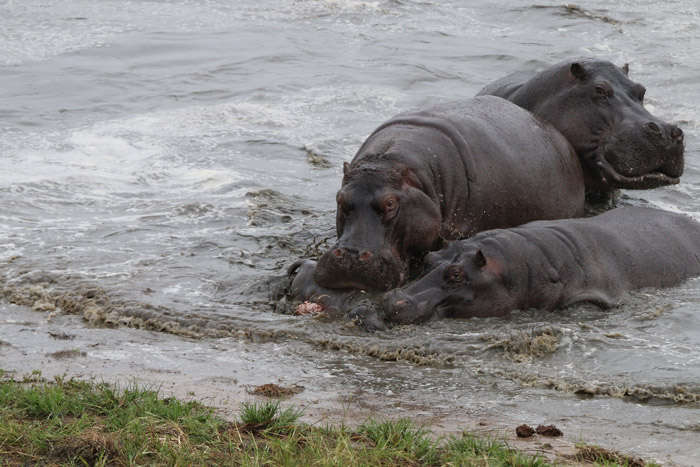 Even the most seasoned guides felt a little traumatised by the sight.

We’re not sure exactly what possessed the hippos to do this and the manner in which they did it. It is possible they are aware of the pressure that is placed on the pod every dry season as the amount of water dwindles in the waterholes. Perhaps this female had migrated from another region last season and wasn’t fully accepted by the pod.

The point is that this is the reality of life and death in the African bush. Like all things in nature, the carcass made for much-needed sustenance for the resident crocodile, terrapin and fish. Although all a little startled by what we had just seen, we knew we had been fortunate enough to witness an incredible moment in nature.