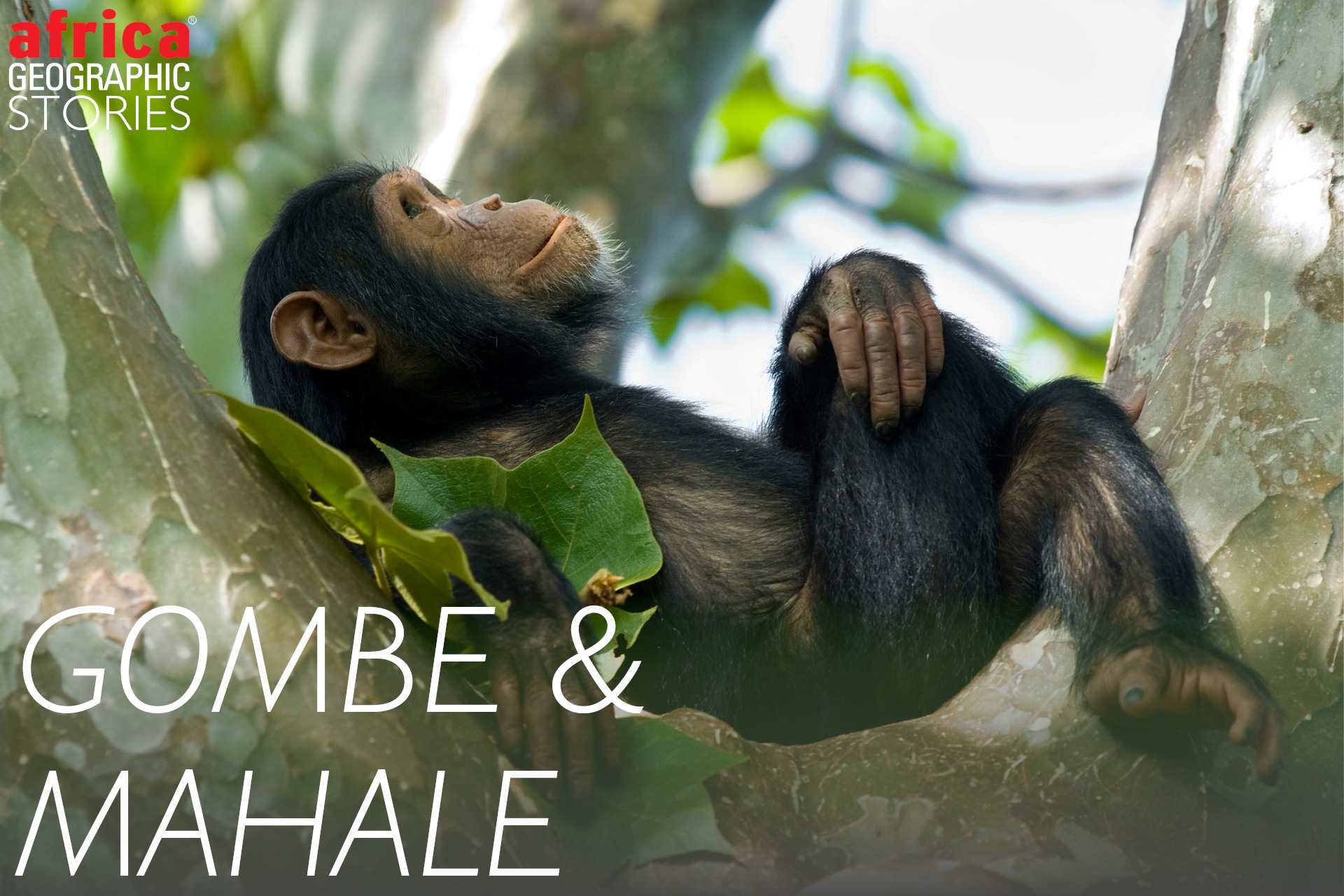 The chimpanzee forests of Tanzania

Most safari enthusiasts associate Tanzania rolling savannas, herds of wildebeest mowing extensive grasslands and a plethora of iconic predators. It does not, however, immediately conjure images of chimpanzees swinging through forest canopies. Yet, there are two national parks where visitors can combine the safari experience with chimpanzee trekking: Gombe Stream National Park and Mahale Mountains National Park. For those in the know, these two remote sections of one of the wildest parts of Africa are something of a primate mecca – where a pilgrimage to meet our forest kin takes place in the verdant forests along the shore of one of the continent’s Great Lakes. 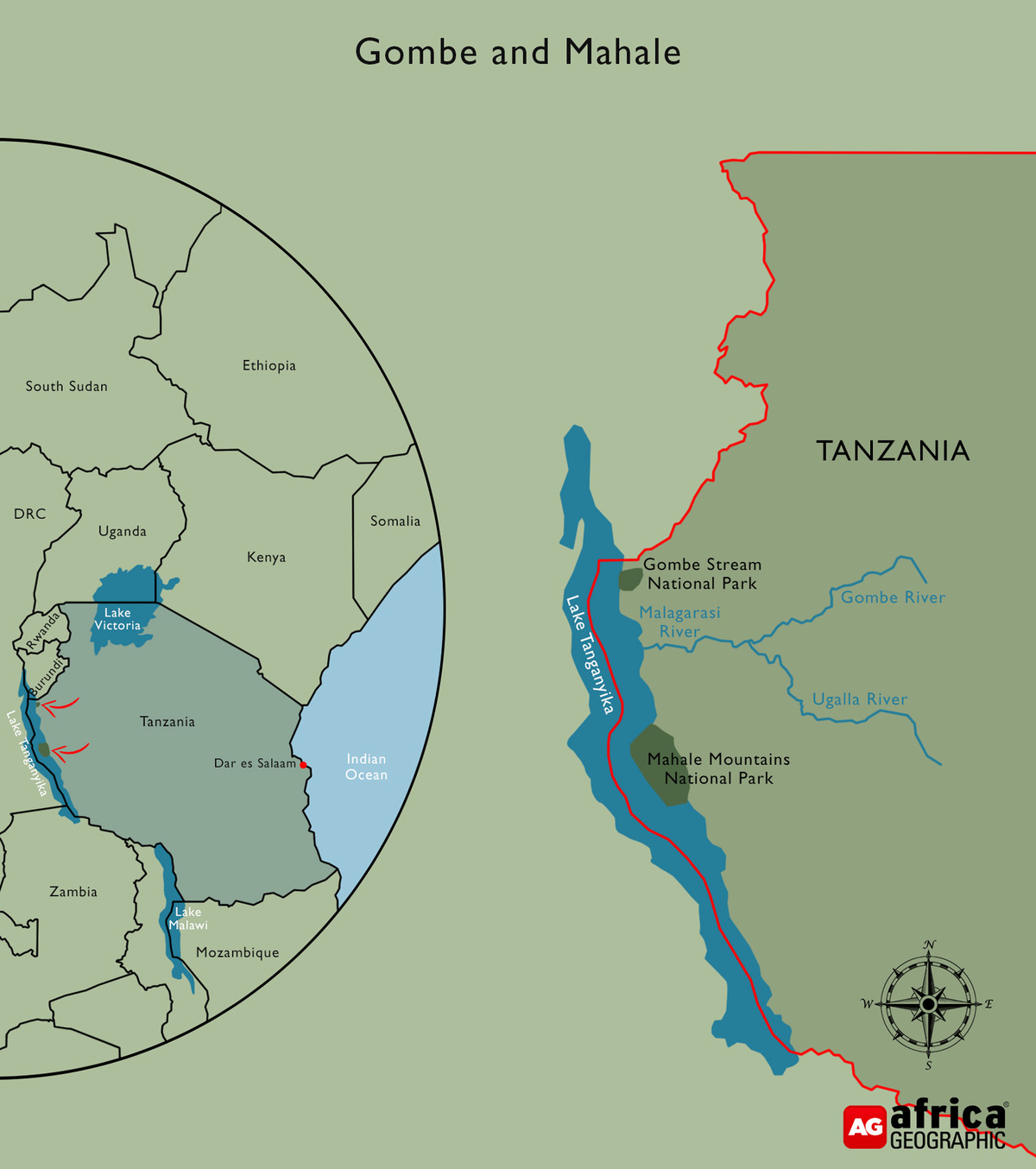 The shores of Lake Tanganyika

For 600km on the western edge of Tanzania, the long strip of Lake Tanganyika marks the country’s boundary with the Democratic Republic of Congo to the west. Both Gombe Stream National Park (Gombe) and Mahale Mountains National Park (Mahale) are positioned on the lake’s eastern shores, with tiny Gombe the northernmost of the two, not far from the town of Kigoma. Further south, situated midway along the lake’s length, is the much larger (and even more remote) Mahale. Both parks are accessible only by boat, and there are no roads within the parks – exploration can only be undertaken on foot.

Though most visitors are drawn here to view the chimpanzees, this is a remarkably biodiverse part of Tanzania, situated at the gradual transition between Central Africa’s rainforests and the savannas of East Africa. Lake Tanganyika has played an enormous role in shaping this ecosystem, and its long white beaches and crystal-clear waters (and cichlid populations) are attractions in their own right. As part of the Albertine Rift of the East African Rift Valley, it is the second oldest and longest freshwater lake in the world. The wildlife of the surrounding forests regularly descends from the mountainous surroundings to drink at its shores. The sight of a troop of chimpanzees or perhaps a slinking leopard on Lake Tanganyika’s beaches is not readily forgotten.

A word on chimpanzees – our forest kin

Anyone who has spent time with one of the planet’s great ape species will be able to attest to the fact that it is world’s apart from, say, an elephant or lion sighting. This could be partly due to the rewarding process of finding them – after long treks along muddy forest and mountain paths, through biting nettles and motivated by anticipation. However, there is something undeniably spiritual about their company and the intelligence, much closer in kind to our own, in their eyes.

This is especially true of chimpanzees which are, of course, our closest primate relatives. Unlike the relatively congenial gorillas with their vegetarian diets, chimpanzees are social, intelligent predators. They have their own social complexities, dramas, and escapades. Their body language and facial expressions seem to convey a wide range of emotions we so typically associate with humanity: melancholy, envy, shame, disdain, savagery … chimpanzees use tools and wage coordinated wars. As a result, many aspects of their wild lives can be viewed through the lens of our evolutionary history.

The chimpanzees in Tanzania are Eastern chimpanzees (Pan troglodytes schweinfurthii) – the most common subspecies of chimpanzee found throughout the Central African Republic, Democratic Republic of Congo, Burundi, Rwanda and Uganda. In Tanzania, they are found only in Gombe and Mahale. Like any safari experience, there is always an element of luck involved, but the viewing in either location can be extraordinary. A caveat to this is that if the chimps decide not to hang out near the beaches, the search through the forests can be physically demanding, and a certain level of fitness is essential.

The enormous Mahale Mountains National Park extends over 1,650km² (165,000 hectares) of craggy mountains and rolling hills. It encompasses (and is named for) the forested Mahale Mountains, where the highest points of Mount Nkungwe reach elevations of over 2,400 metres. The verdant forests along the western slopes are home to a substantial population of chimpanzees (over 1,000 individuals). The chimps of Mahale are part of an ongoing, 50-year-old study. The other side of the mountain range opens up into savannas – home to lions, elephants, zebras, giraffes, and roan and sable antelope. Keen birders can also keep their eyes peeled for the park’s many bird species (over 230 species recorded so far, but the number is likely substantially higher), with specials like the palm-nut vulture and Livingstone’s turaco.

Of course, the vast area and dramatic scenery can make for a challenging search for chimpanzees, should they decide to move away from the more accessible beach areas. Crawling through dense vegetation on hands and knees is not out of the question, but the more intense the search, the more rewarding a chimpanzee sighting will be. While searching for chimps, visitors will find themselves enthralled by some of the other forest creatures, including yellow baboons, vervet, red-tailed, and colobus monkeys (both the red and Angolan black-and-white colobus species). Really fortunate visitors may even witness (or hear) the chimpanzees hunting their smaller cousins, particularly the red colobus monkeys. This is a once-in-a-lifetime experience, though potentially a curiously chilling one.

Despite being about 1,000km away from the nearest ocean, there is a definite tropical, paradise island feel about the shores of Lake Tanganyika in Mahale. The turquoise waters stretch as far as the eye can see and warm waves lap gently onto the shores of unspoilt sandy coves. The park’s lodges are situated on the beach, and guests can opt to rinse away the chimp-trek sweat with a dip in the lake (content in the knowledge that crocodiles only rarely visit).

In contrast to the massive Mahale, Gombe is one of Tanzania’s smallest national parks, a fragile and precious patch of chimpanzee habitat of just 56km² (5,600 hectares), 16km north of the city of Kigoma. Despite its small area, this intimate park sports excellent biodiversity and, in the world of primate research, is celebrated as the home of chimpanzee study. It was here that Jane Goodall first set up her now-famous research centre during the 1960s. Arriving without any “formal” training, Dame Goodall was free from the scientific dogma of the times, which allowed for very little insight into the workings of the minds of wild animals.

Having named her subjects, Goodall set about observing them in earnest. Here, she first observed chimpanzees using tools to “fish” for termites and learnt to reconcile the more affectionate aspects and behaviours with the darker sides of their lives. These included systematic primate hunting techniques and extraordinary potential for intraspecific violence and conflict. Today, the 60-year study is the longest-running field study of an animal species in its natural surroundings. It has supplied us with a vast amount of what we now know about chimpanzee behaviour. The famous chimpanzees have been the subjects of many a thesis, film, and documentary series.

As in Mahale, Gombe is open to day-visitors in possession of a 24-hour pass and guide. However, the park is best experienced over a couple of days spent at one of the lodges. There are many other species to be appreciated, including over 200 birds and a similar variety of primate species to Mahale. One particularly habituated troop of yellow baboons spends its time close to the shoreline and is a constant source of enjoyment and entertainment for guests.

The savanna habit on the eastern side of Mahale stretches to Katavi National Park – one of Tanzania’s best-kept safari secrets. The upshot of this is that chimpanzee treks in Gombe or Mahale can be easily combined with a more “traditional” safari in either Katavi or Ruaha National Park.

Away from the tourist centres and the northern/southern safari circuits, self-travel through western Tanzania is suitable only for the more adventurous, experienced, and patient traveller. It is very rural, with few roads and little in the way of infrastructure. Travel to Mahale and Gombe can be a little arduous but interesting. Long flights and scenic boat voyages offer scenes of Crusoe-like bandas and thatch on paradise beaches. Ultimately, this remoteness and simplicity is a significant ingredient in the magic of a stay in Tanzania’s chimpanzee forests. The fact that it can be enjoyed in one of the high-end lodges with every need provided for is an added bonus.

The best time to visit falls between May and October, which corresponds to the dry season in this part of Tanzania. The high rainfall levels from November until April can make the paths extremely slippery and challenging, with the added disadvantage that the chimpanzees prefer to spend less time on the ground and more in the canopy. As is the case with any primate trekking safari in Africa, a good pair of boots (preferably two) is essential, and waterproofing for all photographic equipment and belongings is always a good idea!

For a first-hand account of a stay in Mahale Mountains National Park:  Magical Mahale: Meetings with Chimps

Learn more about our forest kin