Another year largely defined by the COVID-19 pandemic bombarded us with negative stories. For the world’s tallest mammal, however, 2021 will end on a relatively positive note. Giraffe are still in trouble and they need our urgent help – but numbers are showing a positive upward trend. The Giraffe Conservation Foundation’s (GCF) latest estimate, based on numbers collated from all over Africa, stands at just over 117,000 individuals in the wild.

While this is still a precariously low number – particularly when compared with African elephant (there is only one giraffe for every three to four elephant) – we can see encouraging signs. 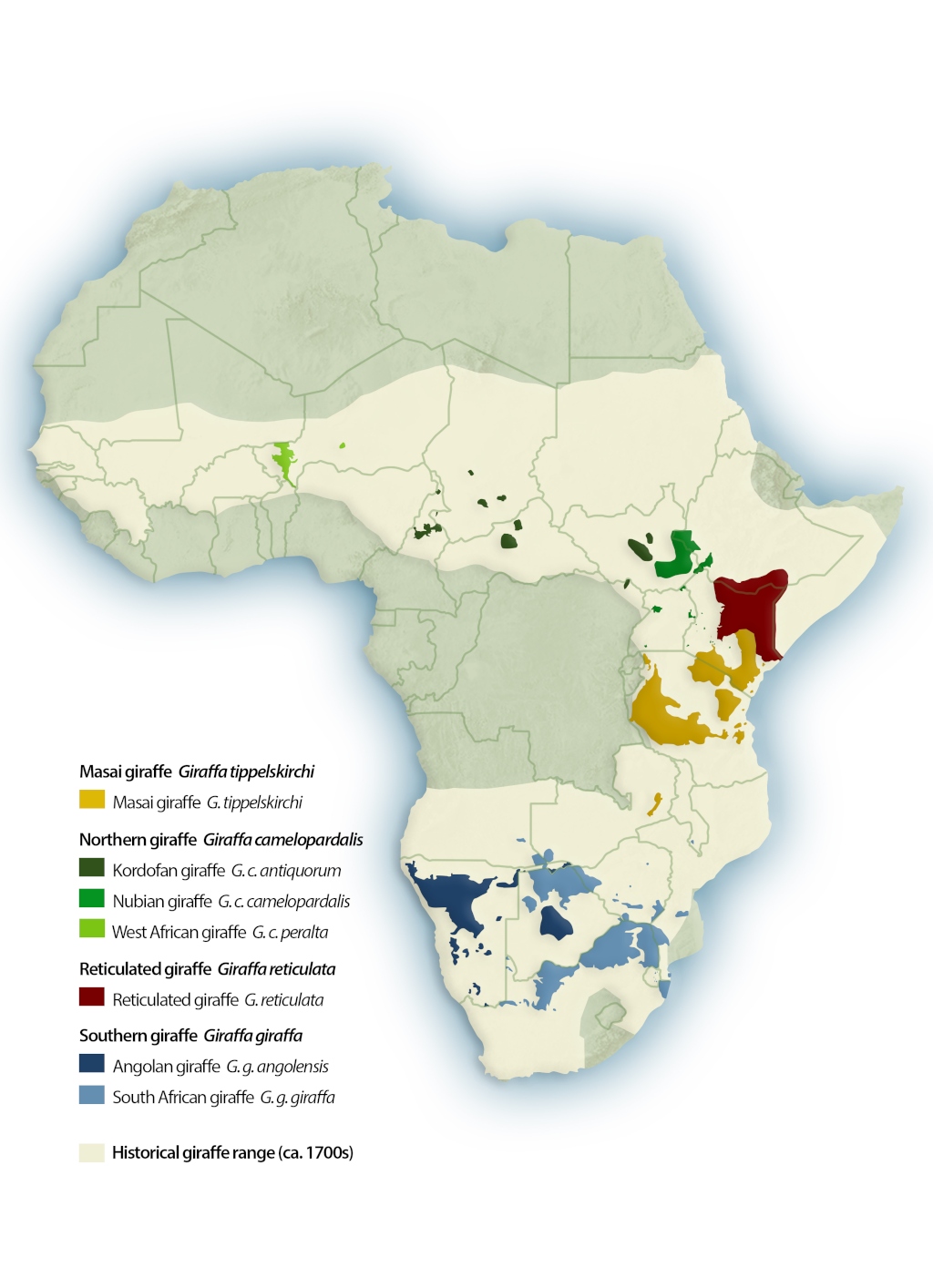 In 2016, giraffe, as a single species, were categorised as ‘Vulnerable’ by the International Union for the Conservation of Nature’s (IUCN) Red List. Now, with the new taxonomic classification of four distinct species, we can better define the conservation status of each species and understand the diverse challenges they face in Africa.

The good news is that overall giraffe numbers are on the rise. The conservation efforts of GCF and many partners appear to be showing success. Estimated at a total of 97,562 individuals in 2015, our 2020 review shows a 20% growth to 117,173 individuals in the wild today. Most importantly, these numbers are increasing across all of the recently defined four species. This is the first time that such trends have been reported in recent history. The following is a brief overview of GCF’s findings.

Consisting of three subspecies – Kordofan (G. camelopardalis antiquorum), Nubian (G. c. camelopardalis) and West African (G. c. peralta) giraffe – northern giraffe remain distributed in small, fragmented populations across East, Central and West Africa. It is important to note that the formerly recognised Rothschild’s is genetically indistinguishable from the Nubian variety, and has, therefore, been subsumed into this subspecies. While numbers remain precariously low, their increasing population is positive, particularly in Chad, the Democratic Republic of Congo and Niger.

Masai giraffe are now the second most populous taxon with a widespread distribution throughout East Africa, including large parts of southern Kenya and central and northern Tanzania. A small, possibly extra-limital (introduced and therefore out of the historical range) population also exists in the Akagera National Park, Rwanda. Note that the Luangwa variety(G. t. thornicrofti) is a subspecies of the Masai species, and as such this species’ range extends throughout parts of the Luangwa Valley in north-eastern Zambia. The increasing number of Masai giraffe is a very positive trend, which can be attributed to a combination of improved and targeted surveys, and localised successful conservation interventions.

Historically, it is likely that reticulated giraffe had a relatively limited distribution in northern Kenya, southern Somalia, and southern Ethiopia. Today, their numbers and range in Ethiopia and Somalia remain essentially unknown. Kenya, especially outside of formerly protected areas in the northern Kenyan rangelands and the Laikipia Plateau, remains their stronghold. In 2015, the first-ever IUCN Red List assessment for reticulated giraffe underestimated their total number, which was subsequently amended. As such, the large increase can be attributed to more accurate survey data rather than substantial population growth. Additional targeted surveys are required to better assess the status of the reticulated species in the wild.

Consisting of two subspecies – Angolan (G. g. angolensis) and South African (G. g. giraffa) – the southern species is now the most abundant. They are distributed throughout most parts of Southern Africa and more widely through extra-limital introductions. During the early 20th-century, southern populations were decimated, but over the past few decades, they have recovered. Increasing habitat in protected areas and swathes of private and communal land combined with intensive management and translocations may not only have helped to increase their numbers but have also potentially resulted in hybridisation of the two subspecies. This may threaten their genetic distinctness (biodiversity). Targeted conservation science is needed to better understand the impact of the hybridisation.

This reduction in numbers is based on a combination of better counting, a better understanding of hybridisation and natural predation. Most major and important Southern giraffe populations are stable or increasing – except for Zimbabwe but that is a very complicated case that we are trying to understand better. It is linked to a significant increase in the lion population which has a devastating impact on giraffe.

About the Giraffe Conservation Foundation

The GCF is the only organisation in the world that concentrates solely on the conservation and management of giraffe in the wild. GCF currently implements and/or supports conservation efforts in 16 African countries. Their work has an impact on over 400,000 km2 (100 million acres) of habitat.

To donate or support the GCF’s work, visit their club page in the Africa Geographic app

For more on the reclassification of giraffe