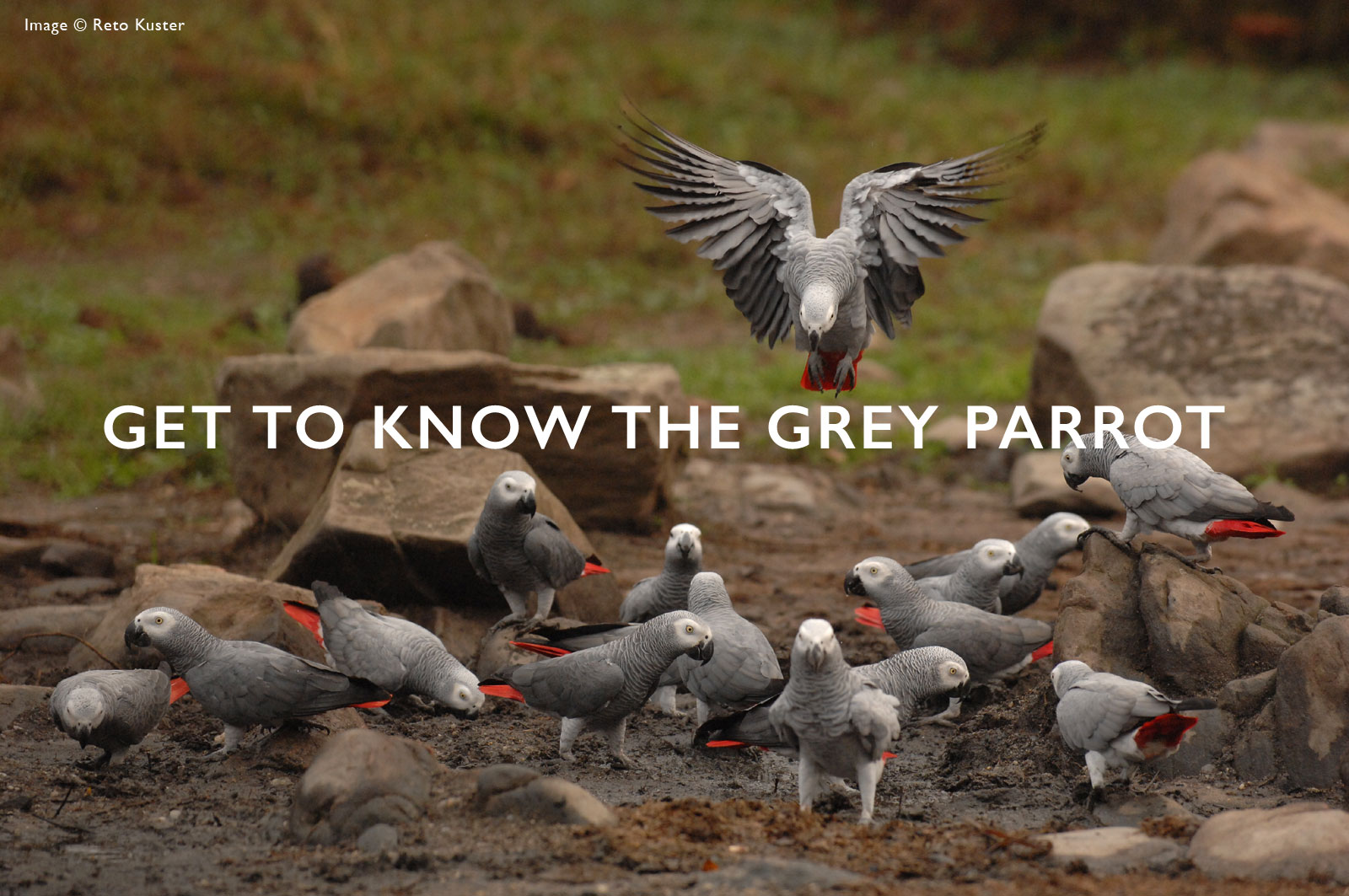 THERE'S MORE TO THIS BIRD THAN MEETS THE EYE

There are 25 species of parrot native to Africa, Madagascar and Mauritius, according to the IUCN – with preferred habitats ranging from closed forest to arid zones. Parrots are not as diverse or abundant in Africa as they are in Australasia and the Neotropics. The grey parrot is found in the primary and secondary rainforest of West and Central Africa. There are in fact two species of grey parrot. 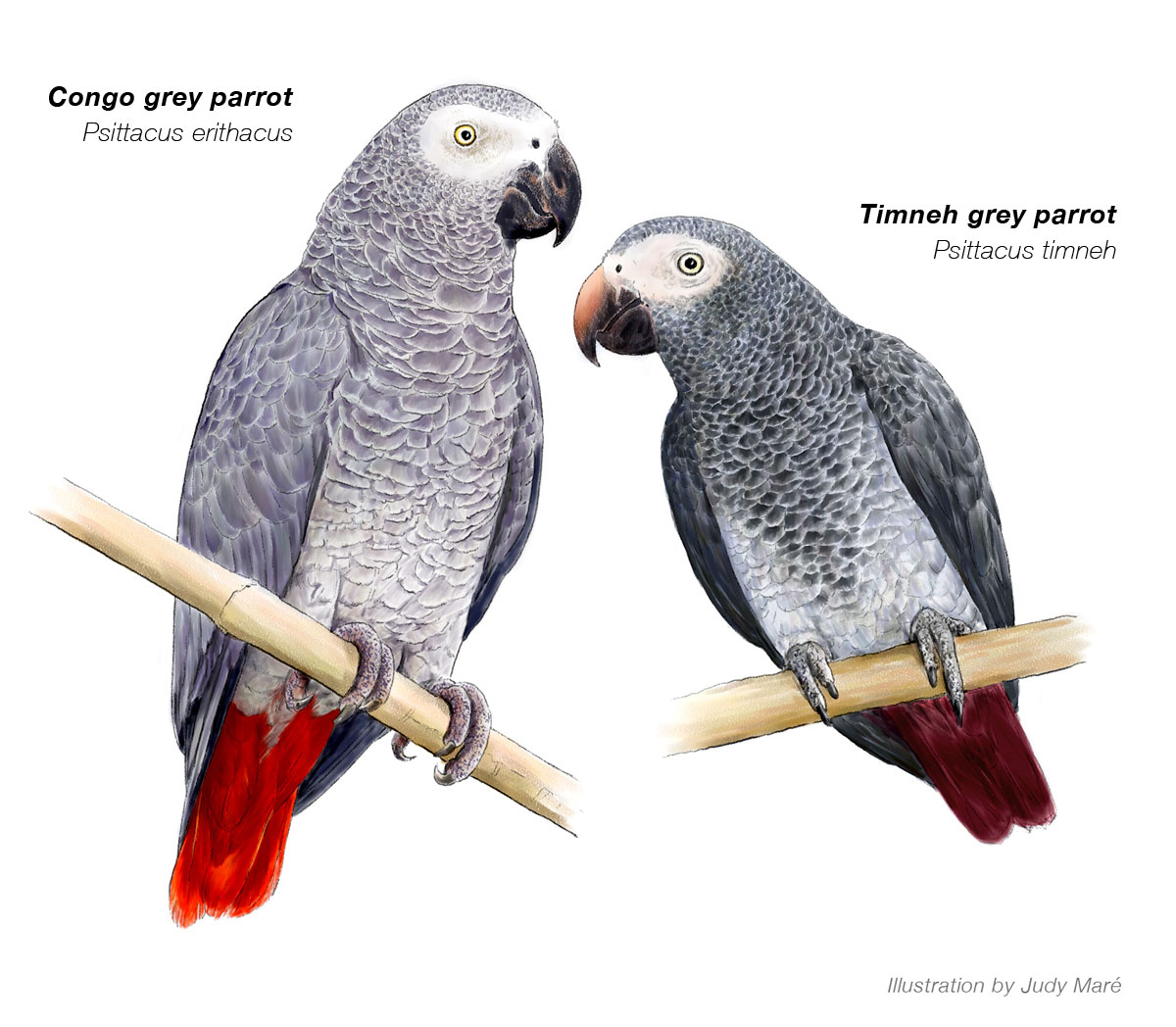 Congo grey parrot (Psittacus erithacus)
This was the nominate species before the Timneh grey parrot was recognised as a separate species. The Congo grey parrot is about 33 cm long and weighs 400-490 grams, with light-grey feathers, cherry-red tails, and a black beak. Immature birds of up to 4 months have black irises, changing to grey and then a pale yellow by the time the bird is a year old, and to deeper yellow as the bird matures, with flecks of orange in very mature birds. The Congo Grey Parrot’s range extends from southeastern Ivory Coast to western Kenya, northwest Tanzania, Democratic Republic of the Congo (DRC) and the islands of São Tomé and Príncipe. It is now extremely rare or locally extinct in several of it’s historic range countries.

Timneh grey parrot (Psittacus timneh)
The Timneh grey parrot is slightly smaller in size, at about 22-28 cm in total length and weighing 275-375 grams, with a darker charcoal grey colouring, a darker maroon tail, and a light, horn-coloured area to part of the upper mandible. Timneh grey parrots are endemic to the western parts of the moist Upper Guinea forests and bordering savannas of West Africa from Guinea-Bissau and Sierra Leone east to at least 70 km east of the Bandama River in Ivory Coast. Not much is known about this species and many experts fear that the population has been severely depleted, placing it in a more serious position that its larger cousin. 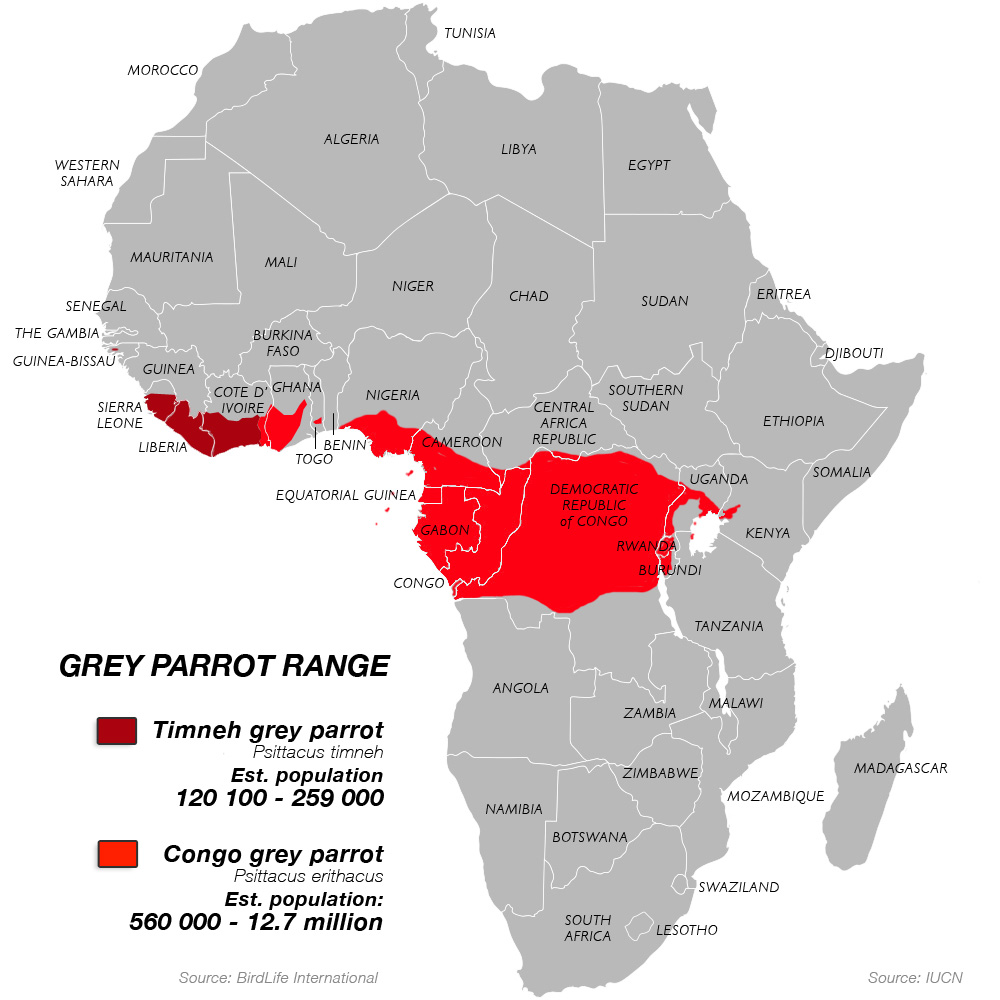 Population
Little did I suspect when planning the Shades of Grey feature that I would be unable to track down an accurate population estimate for grey parrots. Phone calls and emails to the world’s leading conservation entities drew a blank, and the Birdlife International web site suggested a global Congo Grey Parrot population of between 560,000 and 12.7 million individuals (Pilgrim et al. in prep.) – which seems vague at best, and outdated.
Of major concern is that population declines have been noted in Burundi, Cameroon, Ghana, Kenya, Nigeria, Rwanda, São Tomé and Príncipe, Togo, Uganda and parts of Congo and the Democratic Republic of the Congo – which seems pretty much the entire range. The same web site suggests a population of 120,100 to 259,000 Timney grey parrots.

Diet
Little is known of their feeding ecology – they forage high in the forest canopy and their presence at feeding sites is spasmodic and unpredictable as they take advantage of fruiting forest trees. Their diet is varied and seasonal, as they pursue seasonal fruiting and flowering plants. They have also been observed eating snails and even clay, the latter in pursuit of minerals and to absorb or filter toxic compounds and tannins from green fruit. They have been known to do damage to maize crops. It was feared that grey parrots would be a major pest on oil-palm plantations (oil palms are part of their natural diet) but this has not transpired and only a tiny fraction of the fruit are eaten by parrots.
Their ability to exploit a wide variety of food resources has contributed to its unpredictable movements between feed sites. Grey parrots are ‘seed predators’ in that they peel off the flesh to eat the seed/pip. They also drop many fruits and seeds while eating, thus providing the ecological service of seed dispersal in the immediate vicinity of the feed tree and providing food for ground dwellers.

Behaviour
Grey parrots primarily make local flights in search of food. They often roost in large groups, flying in from a radius of up to 20km, forming large noisy flocks, the birds calling to each other with a variety of squawks, whistles, shrieks and screams, both at rest and in flight. Calls include ultra and infrasonic components, exhibit sex and individual differences and local dialects.

Breeding
The nest of the grey parrot is generally a simple cavity, high in a tree with the nesting chamber up to 60cm below the entrance, and sometimes in the crevices of cliffs. Two to four eggs are usually laid, and hatch after an incubation period of between 28-30 days, the young leaving the nest around 80 days later.