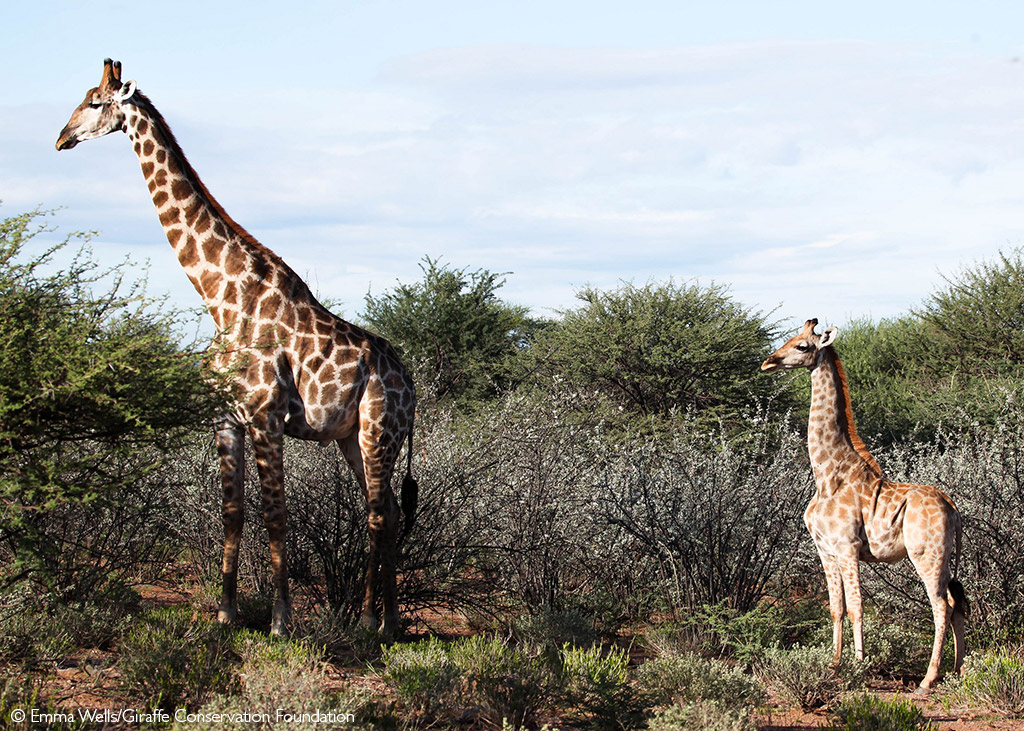 Researchers from the Giraffe Conservation Foundation (GCF) have recently published a paper in BMC Research Notes describing two dwarf giraffe in separate populations in Namibia and Uganda. This study represents the first known accounts of dwarf giraffe in the scientific literature. These giraffe were documented in Murchison Falls National Park, Uganda, and on a private farm in central Namibia during photographic surveys routinely conducted by GCF to determine numbers, population dynamics, and giraffe distribution throughout Africa. Using digital photogrammetry techniques, the researchers measured limb dimensions of the two dwarf giraffe and compared them to other giraffe in the populations, finding that these dwarf giraffe had shorter legs; more specifically, they had shorter radius and metacarpal bones compared to other giraffe of similar age. Click here to see a video of the dwarf giraffe in Murchison Falls, filmed by Dr Michael Brown.

“Instances of wild animals with these types of skeletal dysplasias are extraordinarily rare”, said lead author Dr Michael Brown. “It’s another interesting wrinkle in the unique story of giraffe in these diverse ecosystems.”

The study notes that Uganda’s giraffe population experienced a significant bottleneck in the late 1980s due to civil unrest and associated bushmeat poaching. However, it is unlikely (and unclear) if this particular giraffe – named ‘Gimli’ by the researchers in honour of Tolkien’s Lord of the Rings character – is related to a decrease in genetic diversity. It is unknown what effect, if any, these conditions might have on giraffe survival or reproduction, but fortunately the population is rebounding. In Namibia, ‘Nigel’ the dwarf giraffe, was born in 2014 and his unique body shape was first observed when he was about four years old; an age when male giraffe are close to maturity and fully gown. The GCF researchers will continue to monitor these two male giraffe to see if any observable variances in their behaviour and social status occur.

“While the Namibian farmer had spotted Nigel regularly over the years, it was only after our observations that he realised that Nigel was not a juvenile but a fully grown male giraffe”, said Emma Wells. “It is mainly in comparison to other giraffe that his difference in stature becomes obvious.”

Across Africa, giraffe have experienced significant population declines over the past 30 years, leading to a silent extinction crisis. Population monitoring efforts like those conducted by GCF and its partners in Namibia, Uganda and elsewhere are providing critical information to inform conservation efforts and ensure a future for wild giraffe throughout Africa. GCF estimates that only about 111,000 giraffe are remaining in the wild in all of Africa today. Read more about giraffes here: Giraffes – The Silent Extinction

“Giraffe are undergoing a silent extinction in Africa. The fact that this is the first description of dwarf giraffe is just another example of how little we know about these charismatic animals”, said Dr Julian Fennessy, Director and Co-Founder of GCF. “It is only recently that our research has shown that there are four distinct species of giraffe. There is just so much more to learn about giraffe in Africa, and we need to stand tall now to save them before it is too late.”

About the Giraffe Conservation Foundation

The Giraffe Conservation Foundation (GCF) is the only organisation in the world that concentrates solely on the conservation and management of giraffe in the wild throughout Africa. GCF currently implements and supports giraffe conservation efforts in 16 African countries. As an international science-based conservation organisation, GCF that provides innovative approaches to saving giraffe. GCF is dedicated to a sustainable future for all giraffe populations in the wild. For more information, visit our website: https://giraffeconservation.org/