Just off the Cape peninsula, close to the pretty bay of Simon’s Town, lies an innocuous short stretch of ocean. Like much of the seascape here, kelp sprouts from the kryptonite-green water lapping at boulders straight out of The Flintstones. It looks a lot like the rest of this spectacular coastline. Yet this body of water harbours a prehistoric secret: just a short hop, skip and a dive away from the shore you’ll find living, breathing dinosaurs.

The name of this astonishing creature is the broadnose sevengill shark. Yet I prefer their more palatable, less adjective heavy name: cow shark. These fish have glided through our oceans for hundreds of million of years, unblemished by Mother Nature’s marauding fingers. 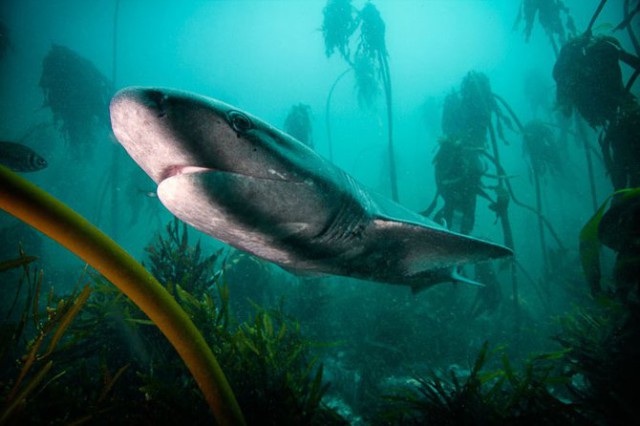 All sharks originally possessed seven pairs of gill slits. A period of tweaking and refining commenced and most species drop a couple of pairs. For some reason the cow sharks kept theirs. In fact, cow sharks have very few modern adaptations, which is why they remain one of the closest links we have to dinosaurs. 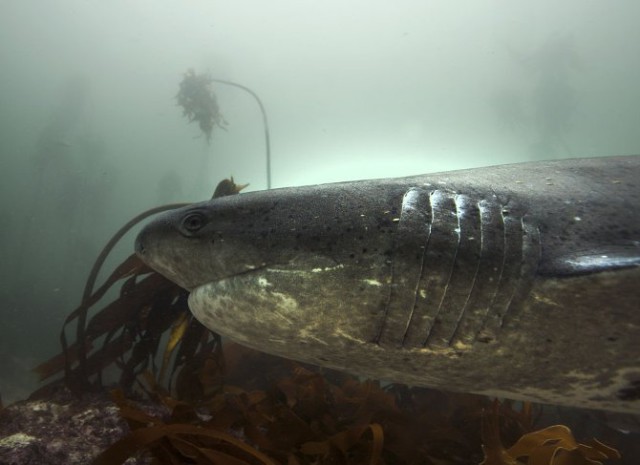 For some unknown reason, the cow sharks just love this tiny stretch of water and congregate here en masse, just metres offshore. I’d read about this extraordinary site, yet before now had never had the opportunity to dive here. Shore diving remains one of my favourite methods of exploring the deep blue; there are no boats with their thumping motors, no launches, no travelling out for miles to sea. A shore dive simply features you, your breathing apparatus, your buddies, and a gradual descent into an underwater world packed full of goodies.

Unfortunately, these goodies come wrapped in a bitterly cold packaging. Even 10mm of neoprene, hoodies, gloves and boots do little to mask the freezing water. Our dive guide was free diver and photographer, Jacques de Vos. Jacques has spent countless hours underwater interacting with the cow sharks. He has built up an intimate knowledge of their behaviour and habits. He stressed that whilst the cow sharks may appear docile, we must maintain eye contact and not touch them. Attacks on divers are rare, yet it’s important to remain vigilant when dealing with toothy predators like sharks. Especially ones that can grow to four metres in length and have been found with human remains in their stomachs. 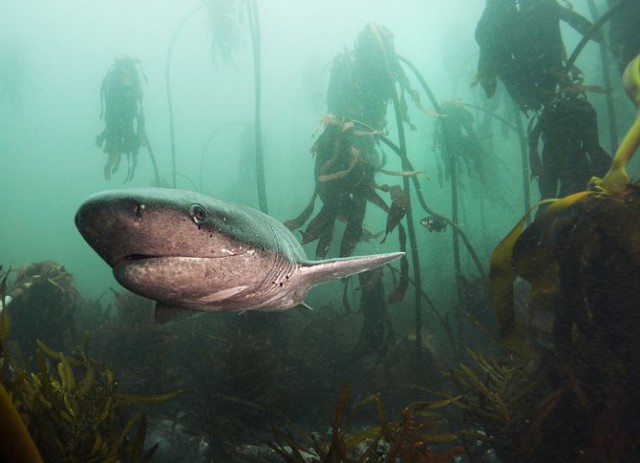 We entered the water via the rocks. The Cape waters welcomed us with an icy blast, jolting our systems, priming our senses. My first encounter with a two metre male put me at ease. In fact, I could have sworn it was smiling at me. Much like dolphins, cow sharks’ stubby faces are etched with perma-smiles. Depending on your point of view, this is either quite cute, or freakishly sinister. Either way, it’s as unusual as it is mesmerising. 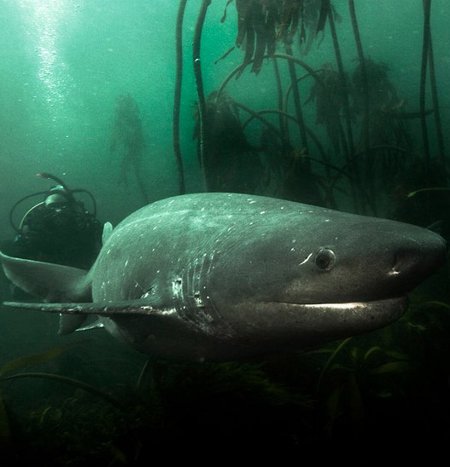 The other notable thing about these sharks is their curious, bold nature. Most sharks, despite their fearsome reputations, remain skittish when encountering humans. Cow sharks, on the other hand, will boldly check divers out, flash a wicked smile and then glide off momentarily, before returning for a second look. They move as if in slow motion, their stout bodies propelled by long, elegant sweeps of the tail. The sharks are a photographer’s dream; willing posers for the camera and enveloped by the most spectacular studio imaginable. 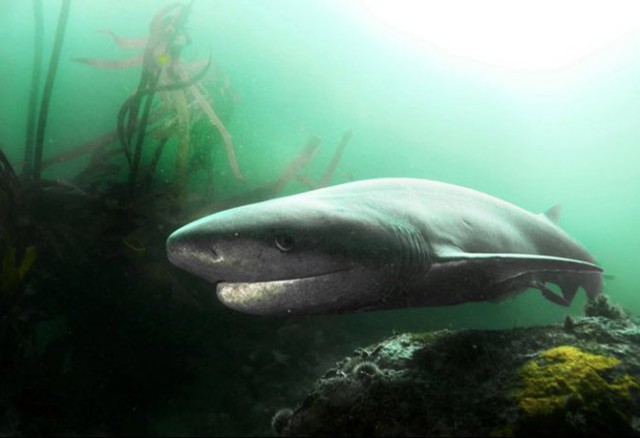 Sadly, the fate of the cow sharks is a familiar one. They are being fished extensively in these waters. Whilst I was diving there, reports began to surface of cow sharks being used as bait for great whites by several of the operators in Gansbaai. Sharks, yet again, are falling prey to the greatest predator to ever walk the earth; man. Every year, we are responsible for the deaths of up to 100 million sharks. We kill sharks for their jaws and teeth which make tacky souvenirs. We kill them for the oil in their liver, their cartilage, flesh and fins. Now, unimaginably, we are killing them to feed their own, by those who pass themselves off as shark conservationists.

I left this magical stretch of water full of wonder at the amazing smiling cow sharks of Cape Town, yet appalled at how, once again, we are changing the face of our oceans. Cow sharks have survived five mass extinctions and due to man’s shortsightedness and greed, they now face a sixth.

Diving with Dinosaurs: The Cow Sharks of Cape Town HD from Moz Images on Vimeo.

Contact Mike at Pisces Divers for more information on diving with the cow sharks.

Aaron Gekoski is a filmmaker, writer and photographer (both land and underwater). He specialises in raising awareness on the plight of threatened species and writes for over 30 publications worldwide. Aaron has recently covered the trades of shark finning in Mozambique, lion hunting in Zimbabwe, seal culling in Namibia, manta ray fishing in Indonesia, and Madagascar’s ‘tortoise mafia’. For more information please visit his website or head to his conservation film and media company.