Climbing Nyiragongo – an active volcano in the DRC

Why on earth would you want to climb an active volcano in the Democratic Republic of Congo? This is a question that many people asked me when I told them about the smouldering adventure that Africa Geographic crafted for me, which entailed climbing Mount Nyiragongo in Virunga National Park plus meeting one of Africa’s greatest ape species. My reply was simple: “It is something that not many people get to do – I will finally come face-to-face with mountain gorillas and the largest lava lake in the world, which is actually easier and safer to see nowadays than ever before.”

The area to where I was headed lies north of Lake Kivu, the Rwandan and Uganda border confluence that hugs the DRC. Mount Nyiragongo is an active stratovolcano, with an elevation of 3,470m, which looms over the town of Goma and Lake Kivu. It is a mere 30-minute drive from Goma International Airport and an hour’s drive from Mikeno Lodge where you can meet the valiant staff of Virunga National Park and learn about the many projects that these determined custodians are undertaking to protect the Virunga Mountains and their wildlife.

I entered DRC via Gisenyi after spending a few days with a group of mountain gorillas in Rwanda’s Volcanoes National Park. Albeit a bit time-consuming, the process of crossing into the DRC was surprisingly hassle-free, and the Africa Geographic team handled everything very efficiently. Once through border control, we were met by a charming guide who drove us through the streets of Goma to the beginning of the Nyiragongo hike. The drive to the Kibati Patrol Post at the base of Mt Nyiragongo was quite an eye-opening experience in itself. The pot-holed dirt roads lined with dilapidated buildings were a stark reminder of the devastating effect of years of unrest. The beautiful, green slopes of the Virunga Mountains were a stark contrast as they climbed valiantly towards the heavens and clouds. Staring at so much natural beauty, I could not help but feel the urgency to remove the burden of war to allow the wildlife, people and the region to prosper from eco-tourism.

As we prepared to start our Nyiragongo climb, standing in a clearing of lush tropical rainforest and listening to the ranger’s instructions for the trail, I had the distinct feeling that everyone here was playing an important role in this park’s future.

The magnitude of the challenge ahead also suddenly dawned on me.

Not only was I about to climb an active volcano that last erupted in 2002, but I would need to ascend 1,500m to the crater’s rim to reach its peak at 3,470m. Luckily, my nerves were quickly soothed by a concise and very enthusiastic prep-talk by the Virunga National Park head ranger.

It takes between four to six hours to reach the Nyiragongo summit – depending on the group’s fitness level and this is broken up into five main parts with well-located resting spots at the end of each section. On some occasions, members of our group moved at their own speed and then regrouped, but overall our progress was determined by the pace of our slowest members. This gave everyone ample chance to rest and catch their breath. The first section is mostly flat and wet, but incredibly stunning. The thick rainforest engulfs you in a world that rivals JRR Tolkien’s imagination. This is the longest section and a good opportunity to loosen the cobwebs from your knee joints. It was also here that I was most grateful for my choice to accept the help of a porter, who took my main bag and enabled me to enjoy this rainforest as well as acclimatise to the humidity and heat.

Eventually, the forest thinned and we slowly moved onto a trail that has been naturally formed from the lava that flowed in 2002. At first, I found it quite tough to maintain my footing on the loose rocks, but the ground soon became solid and a little easier to negotiate, even though it also became steeper. The rangers slowed down their pace in a few areas and announced that there was a family of chimpanzees that could be found in the area. The mere idea that I could get a glimpse of unhabituated chimps made my heart swell. “They are here,” I thought. Sadly we never saw them, but a few sightings of blue monkeys were most welcomed. As the trail got steeper and reached higher altitudes, people started to feel the challenge and many struggled with the third and fourth sections of the hike. However, the rangers had developed a feel for the fitness of the group and stopped frequently enough for people to catch their breath. They also cunningly helped to distract our minds by pointing out the view and forcing us to absorb the amazing beauty of the valleys, lakes, mountains and forests below.

As we began to climb into the clouds, the temperature dropped dramatically. But the open terrain of dark charcoal solidified volcanic rock and the view of the mist below our feet took our breath away. I could see our accommodation ahead and I knew that I was close to viewing a lava lake for the first time. I began to feel the satisfaction of what I was about to achieve boil up inside of me. The little boy who had been infatuated with dinosaurs emerged from his realist extinction. I was far too excited to rest. I was on a volcano, and I couldn’t wait to get to the top and see lava for the first time.

Nearing the summit it became evident that the next 12 hours would be pretty cold. I would strongly suggest that anyone heading up this way be well prepared for this and bring along a warm set of clothes to make your overnight stay on Nyiragongo more comfortable. The guides were very good, and they quickly had a fire going and soon served us all a very welcoming hot beverage. A collection of small A-frame huts are perched on the slopes of the Nyiragongo crater, only a two-minute walk away from its rim. The sound of churning lava and exploding gases kept our excitement levels and expectations high. The huts are basic and there’s only enough space for two people to lie down, but when you consider the challenges that the Virunga National Park rangers and staff have had to overcome to build them and protect them from the ravaging onslaught of climatic conditions, they’re more than adequate. Especially when a chilly swirl of wind whistles outside. 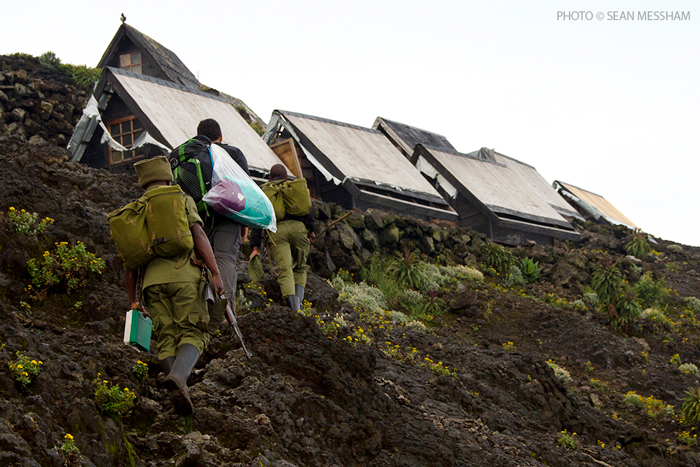 My first view of the lava lake will forever be infused into my memory. It did not disappoint. There I stood at 3,470m, on the edge of the volcanic crater, looking down at the largest lava lake in the world. But it was the sound of the churning lava and exploding gases that first impressed me, as the noises echoed so loudly up the crater that they seemed to explode in my ears. And although it was a 250m descent to the lava lake, the sounds were loud enough to make me feel as if I were standing right next to the churning lava. However, it wasn’t long before the clouds drifted over and concealed the view of the lava lake. My guide, Joseph, offered comfort by telling me that the best time to view the lake would be later at night. So I took the opportunity to put on some dry, warm clothes and take shelter from the chilly wind in my small hut. Being a keen photographer I was itching to capture my own photographs of the crater, so after a lovely hot meal of pasta and potatoes, Joseph and I made our way to the crater’s edge to wait for the view to clear. And when it did, the syrupy red and orange lava was a sight to behold. 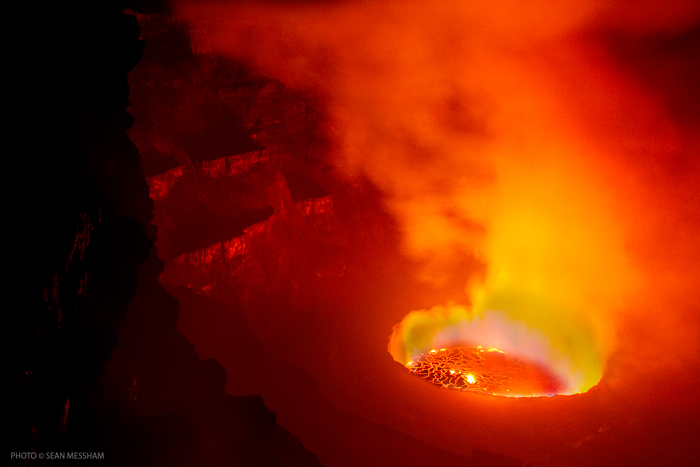 There are two viewing points that the rangers and guides ask you to use, and both provide fantastic views of the crater. It is a little tricky to capture the full intensity of the glow and light from the lava as it is constantly churning and boiling over. This means that there is a harsh contrast between the lava in the centre of the volcano and the glow that it provides on the outskirts of the rim. Unfortunately, I only had about two hours of viewing before the clouds pulled the veil over the spectacle again.

When I woke up the next morning I was greeted by a hot cup of coffee and a warm omelette. This warm meal solidified an overwhelming aspect of the trail for me – the amazing efforts that all the rangers, guides and porters made to ensure that I was always comfortable. Their sense of hospitality, in spite of a language barrier, was a most memorable component of this hike, and was a memory that I took from the mountain to cherish forever.

The same has to be said for the Africa Geographic team, who set high standards from the start when I first contacted them. Christian and his team checked on us regularly to make sure that things were going smoothly before, during and after the trip. And I couldn’t be happier with how the entire trip to Rwanda and the Democratic Republic of Congo went.

While taking photographs in the Cederberg, neck deep in water with a modest film camera, Sean Messham opened the shutter that he wanted to focus his energy towards environmental journalism. For more of Sean Messham’s images visit his Facebook Page, Sean Messham Photography.