Posted on August 30, 2021 by teamAG in the Decoding Science post series.
ShareTweetPinEmailShareShareLinkedIn 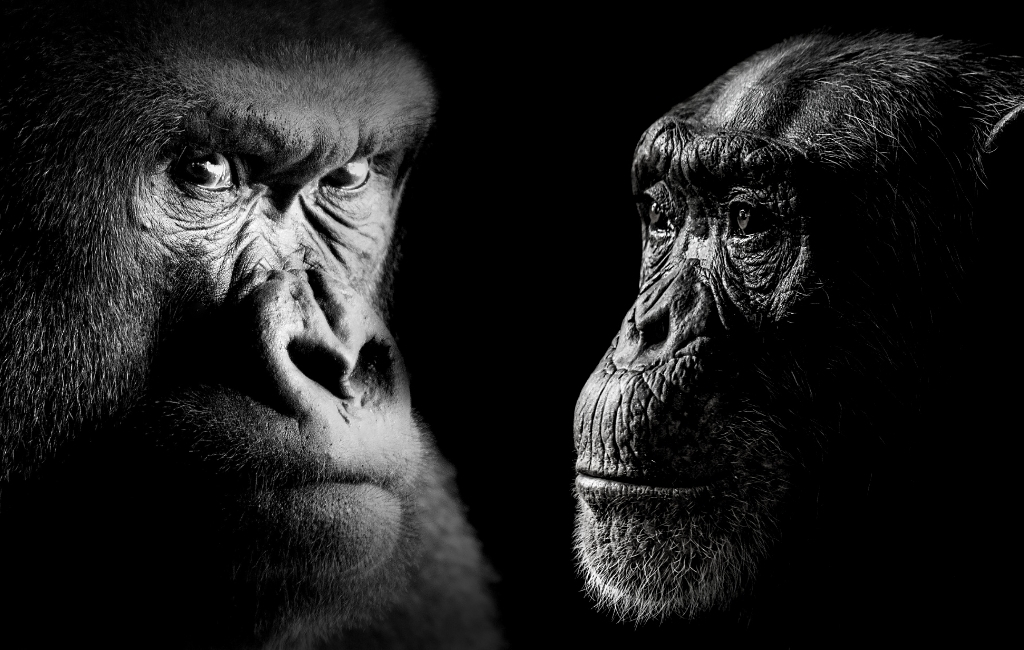 Researchers have recorded the first known instance of chimpanzees killing gorilla babies. During the two observed events in Loango National Park, Gabon, chimpanzees approached and intimidated smaller troops of western lowland gorillas. In each case, an infant gorilla was killed.

Interestingly, the Loango Chimpanzee Project has researched these chimpanzee troops for over 16 years, yet this is the first time they have observed lethal coalitionary attacks. This, in turn, has led researchers from the Osnabrück University and the Max Planck Institute for Evolutionary Anthropology in Leipzig, Germany, to question whether habitat loss and climate change have increased competition for food and led to increasingly aggressive encounters between the two species.

Intraspecific killing (within a species) has been observed across chimpanzee and gorilla groups throughout their various ranges in Africa. Male coalitions of chimpanzees, in particular, are known to travel into neighbouring communities and launch attacks on adjacent troops of chimps. However, where chimps and gorillas overlap, their interactions have previously always been observed to be relaxed, peaceful and, occasionally, playful.

The two attacks are described in detail in a paper published in Scientific Reports. The supplementary material includes two videos of the interspecies clashes. [Editorial note: if wearing headphones, we would advise, from experience, turning the volume down somewhat before playing these. We cannot link the videos to this post, so please see them at the bottom of the original paper.]

The first lethal encounter occurred in February 2019, involved a confrontation between chimpanzees of the Rekambo community and gorillas, and lasted for 56 minutes. A subgroup of 18 chimpanzees encountered approximately five gorillas, including a silverback. Though the silverback attempted to defend himself and the rest of the group, he was surrounded by a group of around nine male chimpanzees who eventually chased him off. During the chaos, an infant gorilla was separated from its mother and killed. Its body was passed between chimp group members but not eaten.

The second encounter also involved some of the same individual chimpanzees from the Rekambo community and played out over 79 minutes in December 2019. A group of around 27 chimpanzees encountered a group of gorillas in the canopy and surrounded them. This time, the silverback climbed out of the trees and fled. When one female tried to escape with her infant, she was challenged by the adult male chimpanzees, who then tried to pry the infant from her. She managed to escape, but another female gorilla was not as fortunate. Surrounded by eight adult male chimpanzees and one adolescent female, she was apparently unable to hold on to her infant and was observed without it a short while later. An adolescent chimpanzee was then observed holding the infant gorilla carcass. In this instance, the dead baby was almost entirely consumed.

The researchers offer several possible explanations for these attacks. The first, and probably most obvious, is that the attacks are opportunistic predation by the chimpanzees. However, the behaviour during the attacks does not fit with observed hunting behaviours – both before and after the interactions. During the encounters, the chimpanzees were highly vocal, emitting alarm barks and screams and performing threat displays. After the baby gorillas were killed, the adult male chimpanzees showed little interest in the carcasses; in contrast with hunting forays when the adult males are normally first to feed.

Another possibility is that the encounters were a product of interspecific competition (as might occur between lions and hyenas, for example). Gorillas and chimpanzees have high dietary overlap, and the attacks occurred during times of food scarcity with increased competition for fruit resources. Previously peaceful co-feeding between the two species occurred during April – a month of low dietary overlap. This explanation also fits the behaviours of the chimpanzees, which bore similarities to intraspecific encounters between rival groups. Infanticide is common during these raids.

Whatever the reason, it remains to be seen if and when a fatal encounter between the two species will be observed again. This research provides the first evidence that chimpanzees can have a lethal impact on gorillas. It will be vital to understand if this kind of conflict is being driven by competition for resources – particularly as reduced fruit availability has already been shown to be negatively affecting forest elephants.

Over the course of our human evolution, our ancestors would have interacted with other sympatric ape species – occasionally in competition. The researchers suggest that information from these “living models” (the chimpanzees and gorillas) could be combined with new insights from fossil records. This we could use to interpret the ecological constraints and mechanisms that would have shaped our own coexistence (or lack thereof) with other species.