Posted on November 24, 2020 by teamAG in the Decoding Science post series.
ShareTweetPinEmailShareShareLinkedIn 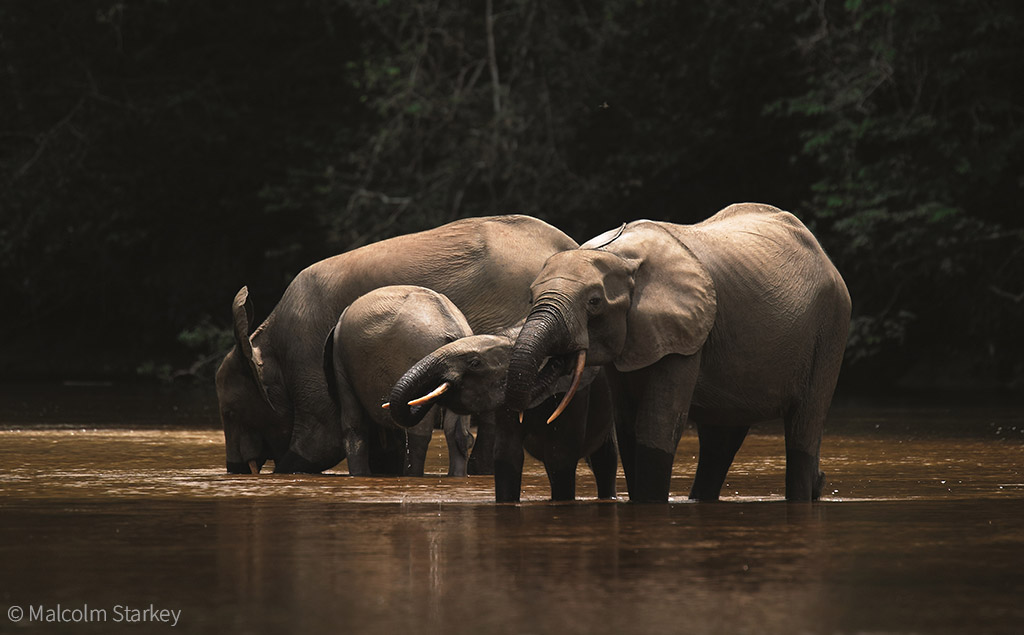 Lopé National Park in Gabon is a UNESCO World Heritage site, and its Afrotropical forests provide a refuge for gorillas, chimpanzees, and forest elephants. However, a recently published study shows an 81% decline in fruiting over a 32-year-period and a corresponding 11% decline in forest elephant body condition over a decade. This fruit famine, say researchers, is mostly likely due to climate change and raises concerns over the long-term survival of the region’s forest elephants and other iconic species.

The future of Africa’s megafauna depends not only on safeguarding their habitats against threats from human encroachment and hunting but maintaining the health of the ecosystems that support them. The effects of climate and atmospheric changes can impact habitats, even in situations where direct human pressures are low. For scientists and conservationists, detecting, quantifying, and understanding these changes is a key conservation priority.

According to the study, the fruit is a keystone resource – its production is highly dependent on climatic cues, and there is abundant evidence that climate change has already caused shifts in the timing of plant reproduction. The critical minimum temperature hypothesis details how some Afrotropical plant species require temperatures to drop below a certain threshold to trigger flowering and, therefore, reproduction for these plants is cued less frequently as temperatures rise.

Lopé National Park hosts the longest continuous study of tropical tree phenology (the study of cyclical events influenced by seasonal variations in climate and habitat factors) in Africa. Researchers have been monitoring specific tree species important to gorillas, chimpanzees, and elephants since 1986. Once a month, the crowns of trees have been observed using binoculars and the proportions of the canopy covered with flowers, fruit and leaves have been recorded. The authors used this information to conclude that the trees in Lopé are reproducing less often and that the probability of encountering flowers and fruit has declined over time.

Observations of ripe fruits for important elephant fruiting tree species declined at an even faster rate of 87.8%. This decline translated to one in five trees being observed to be fruiting in 1987 to one in 40 in 2018, with a particularly noticeable drop between 2000 and 2003. The historical seasonality in fruit availability has disappeared in recent years with a significant reduction in ripe fruit observed from October to March, which was previously the season of abundance.

The declines in the probability of encountering flowers and unripened fruit suggest that this is not due to decreased pollination or maturation. The researchers concluded that this is most likely due to climate changes, as the minimum daily temperature has increased on average by 0.25C per decade at Lopé, with a simultaneous decrease in average rainfall (75mm each decade).

To explore the effects of this reduction in fruit, researchers set about examining the body condition of the elephants. To this effect, a massive photographic database of over 2823 photos from between 1997 to 2018 was meticulously analysed. Disturbingly, the period between 1997 and 2018 saw a total decline of 5.0% in the mean body condition for all age classes of elephants. During the 2008-2018 period, the decline was particularly conspicuous, and the data from this period indicated an 11.1% decrease in average body condition.

It is uncertain whether or not the observed changes in body condition have affected the population health or dynamics in the forest elephants of Lopé, but previous studies have shown that environmental stressors have dramatic and long-term consequences for African savanna elephants.

The researchers conclude that the declines in both plant reproduction and elephant body condition are indicative of a system-wide change in the ecosystem. Given the scarcity of long-term datasets available for the tropics, the authors warn that similar changes may be occurring elsewhere, unrecorded. The study concludes: “these data are a reminder that even where direct human pressures are low, plant and animal communities may not be protected from the creeping influences of the Anthropocene”.

“Large animals like forest elephants are already under severe pressure in Central Africa due to hunting, habitat loss and habitat degradation. If important protected areas like Lopé National Park in Gabon can no longer support them because there is not enough food, then we may see further population declines, jeopardising their survival in the long-term,” the co-lead author Dr Robin Whytock told the African Elephant Journal.