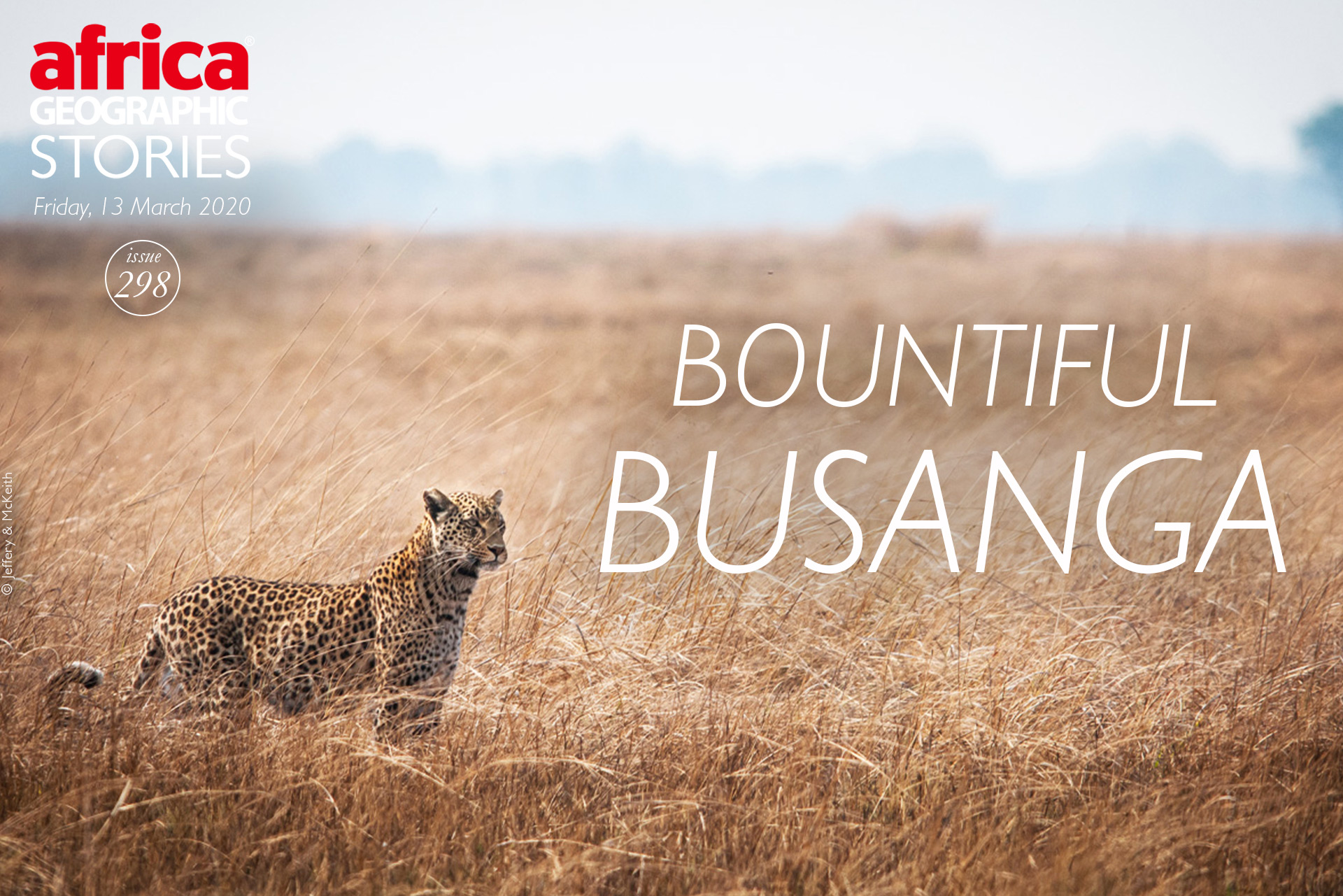 Kafue National Park is the oldest park in Zambia and one of the largest in Africa, representing 36% of Zambia’s total national park coverage. Kafue is part of the five-country Kavango-Zambezi Transfrontier Conservation Area – an unspoilt wilderness with an extraordinary diversity of wildlife. Mass tourism does not occur here, so the bush is pure and unexplored, infrastructure is sparse, and visitor numbers are low. With vast tracts of pristine bushveld, Kafue National Park is one of our favourite places, and this time we were set to explore Busanga Plains in the far north.

In the northern portion of the park, Busanga Plains is the jewel of Kafue. The Lufupa River flows into the Busanga Swamps and wide-open spaces flood during the rainy season, generating lush grazing for an array of wildlife. The vast mosaic of grassy seasonal floodplains stretches to the horizon – this is undoubtedly the best place for wildlife viewing in Kafue. The 720km² (72,000 hectares) of floodplains are dotted with palm groves, papyrus reed beds, lily-covered lagoons, woodlands, open waterways and riverine vegetation. As the plains drain after the rainy season, they attract large numbers of wildlife and fantastic birdlife, including huge herds of near-endemic red lechwe, as well as puku, massive herds of buffalo, blue wildebeest, Lichtenstein’s hartebeest, defassa waterbuck and more solitary grazers such as roan and oribi. Attracted by rich pickings, predator numbers are substantial. Lions, side-striped jackals, caracals, serval and genets are regulars, and you often find yourself being serenaded by hyenas at dinner. 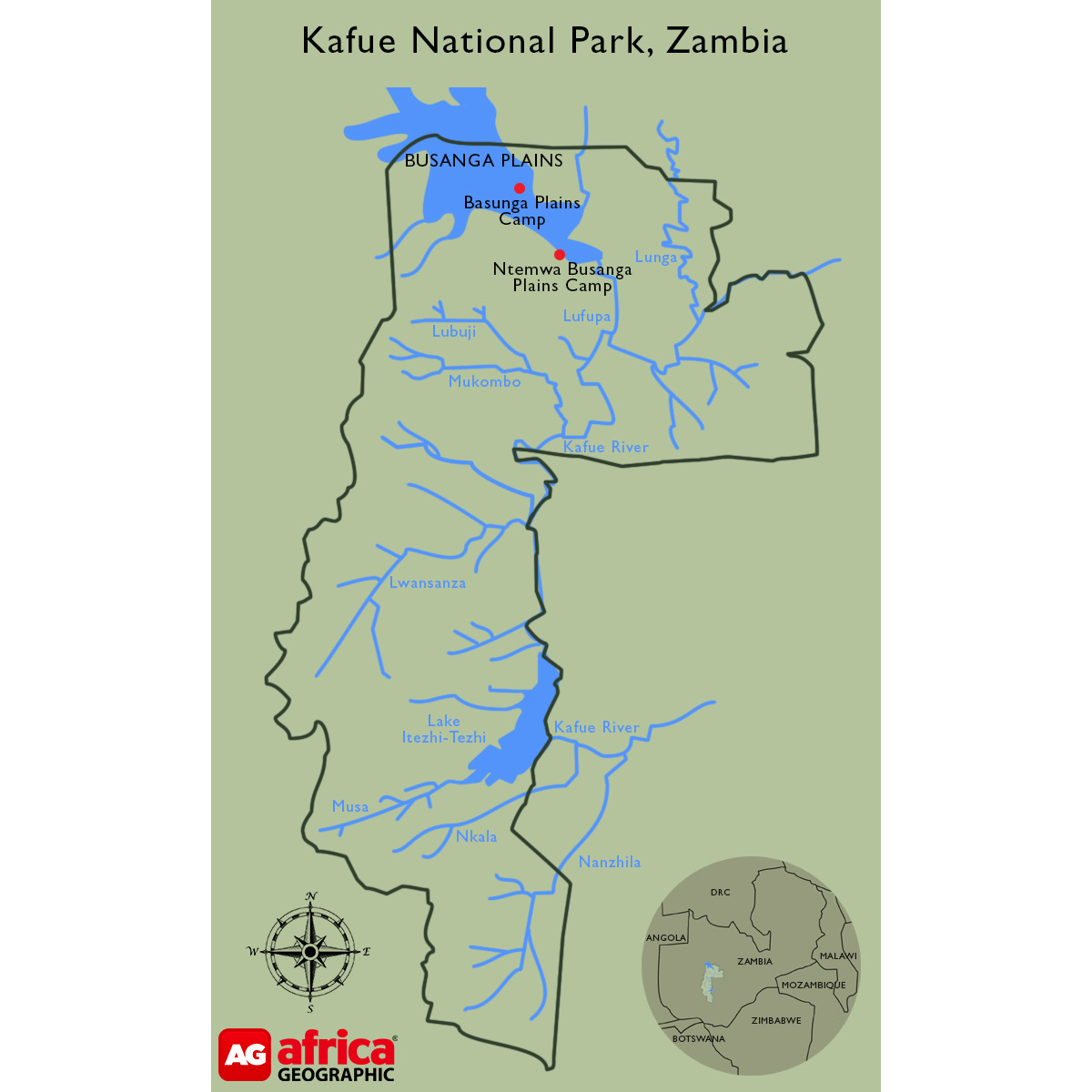 Being submerged for most of the year, these flooded plains are a magnet for birds. The water, islands of fig trees and floodplains make for superb birding, and more than 500 bird species have been recorded here. The plains are home to large flocks of open-billed and yellow-billed storks, as well as grey crowned cranes and their rarer relatives, the wattled crane. Keen birders can look out for Fülleborn’s longclaw and, for the more fortunate, the rosy-throated longclaw and the endemic Chaplin’s barbet.

We were at Busanga Plains Camp, a beautiful seasonal bush camp in the north of Busanga Plains. The camp overlooks the openness of the plains, interrupted only by tree-studded islands, where fig trees and wild date palms draw their nutrients from the remains of giant anthills. Our favourite part of camp was a wooden viewing platform on stilts tucked away up high in a majestic fig tree, with breath-taking views out onto the floodplain.
In the morning mist, as the sun peaked above the horizon, the plains were liberally dotted with herds of red lechwe of various ages and sizes, from newborn to battle scared grandparents, and every size in-between. Many of the herds numbered in their hundreds. Amongst these herds, there were a sprinkling of wattled and crowned cranes, many with young in attendance. With their sharp, slim beaks and slender legs, wattled cranes are the largest cranes in Africa and the tallest flying bird on the continent. Listed as vulnerable on the IUCN Red List, wattled cranes are often found with lechwe on the plains, and it is one of their few known breeding sites.

Crowned cranes, with their crowns of stiff gold feathers, are regularly seen on the plains. Standing about a metre tall and with a wingspan of around two metres, these cranes are omnivores, eating anything from plants and seeds to frogs, small fish and even snakes. Stamping their feet as they walk, they flush out insects which they quickly catch and eat. They capitalise on feeding near the red lechwe by darting in and grabbing prey disturbed by the antelopes’ movements. Crowned cranes’ entire days are spent looking for food, but at night they roost in trees. These are only cranes that can roost in trees because they have a long hind toe for grasping branches.
As the sun rose in the sky, we found a pride of eight lions – two females with their six cubs. The cubs were intensely curious, coming in close to sniff the wheels and then stretching out to relax in the shade cast by the vehicle. One youngster, clearly a little bored, took hold of a large round ball of elephant dung in his mouth and carried it off to play with. Despite his best efforts, he couldn’t interest anyone else in the game.

In the afternoon, a goliath heron stood sentinel in a lagoon as Egyptian geese nibbled at the green grass in the shallows. A pied kingfisher, with its black mask, hovered with wings frantically flapping before diving time and again vertically into the water. A procession of buffalo, over a thousand-strong, stretched out for kilometres across the plains like a string of black pearls.

Moving on we headed for the southernmost edges of the plains, to Ntemwa-Busanga Camp, a rustic bush camp of safari tents with open-air en suite bathrooms, each complete with the traditional safari ‘bucket showers’. Zambia is one of few places where night drives are permitted in national parks, and Ntemwa has access to an extensive network of roads that cover the expanse of the plains. The late afternoon and night drives were terrific here. Watching an idyllic scene of Egyptian geese, storks, cranes and various other water birds at a lagoon as the sun went down was a beautiful end to the day. As night descended, we saw a selection of nocturnal creatures on our drive, from a white-tailed mongoose rummaging in the undergrowth, to genets whose eyes reflected in the spotlight, all accompanied by the eerie cries of the crowned cranes piercing the night sky as they settled in the treetops as darkness descended over the plains.

We didn’t have to head out of the camp to find wildlife. At Ntemwa hyenas came into camp at night to check out what was on the menu in the kitchen before leaving ‘empty-handed’ (fortunately)! One morning, as we headed from our tent to breakfast, we found a trail of lion footprints pressed into the sand along the footpath. There was clearly a sound reason why we were always escorted to our tents at night!

Busanga Plains is one of those special places of low-density tourism, in a world where many ‘remote’ places are becoming overrun by travellers. Fortunately, due to its remoteness, inaccessibility and limited accommodation options, it’s likely to remain that way.