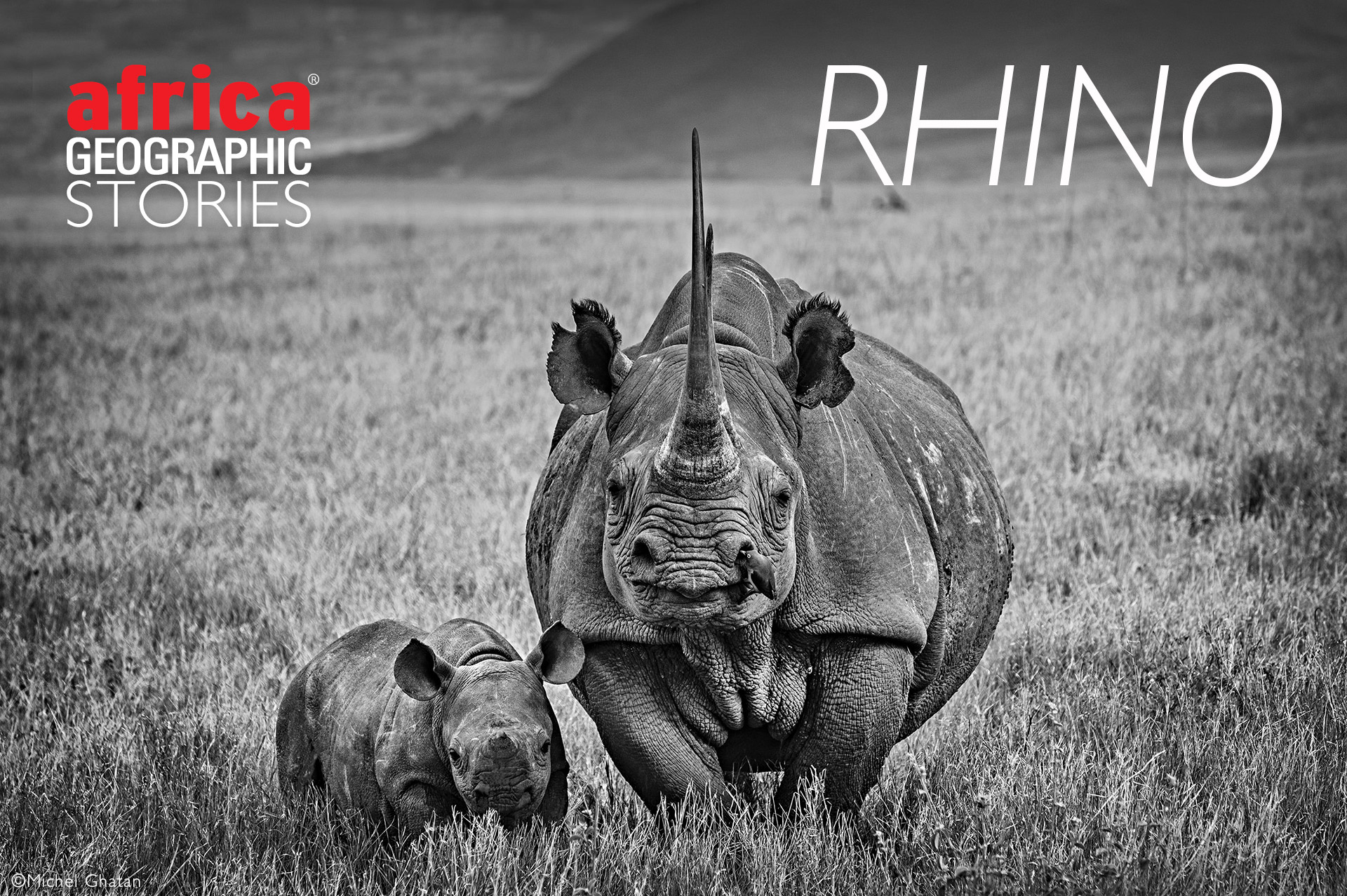 the black & white of africa's rhinos

It started as a relatively innocuous morning spent recording midden positions for a research project, barely 200 metres from our vehicle. I was crouched over a midden examining the freshness of the dung (very) when a soft snort drew our attention to the black rhino cow standing in a thicket some 50m away. She stared myopically at the three guides standing upwind of her for a second or two before wheeling around and trotting off in the opposite direction, tailed curled characteristically over her back. We changed our trajectory to avoid her and set about circling back.

As we stopped to record the coordinates of the next midden, she reappeared suddenly, again only 50m away but this time downwind of us. While we were dawdling, she had circled to get a better measure of the situation and had clearly decided that we were unequivocally not to be trusted. Aided by an exceptional sense of smell and hearing, she was no longer confused, and her head was raised as she stared directly at us. She took one step in our direction, then another. A quick assessment of my immediate surroundings showed a raisin bush to my left and a bushwillow sapling the width of my wrist to my right. Marvellous.

Then suddenly she was charging, closing the gap at an alarming pace. If clichés are to be believed, my life should then have flashed before my eyes, but I felt only an unreasonable bitterness directed at the useless bushwillow. One cliché did hold, however, and time seemed to slow as I become aware of every huff of her breath and the movement of her feet and, at what seemed like the last second, the way she dropped her head… 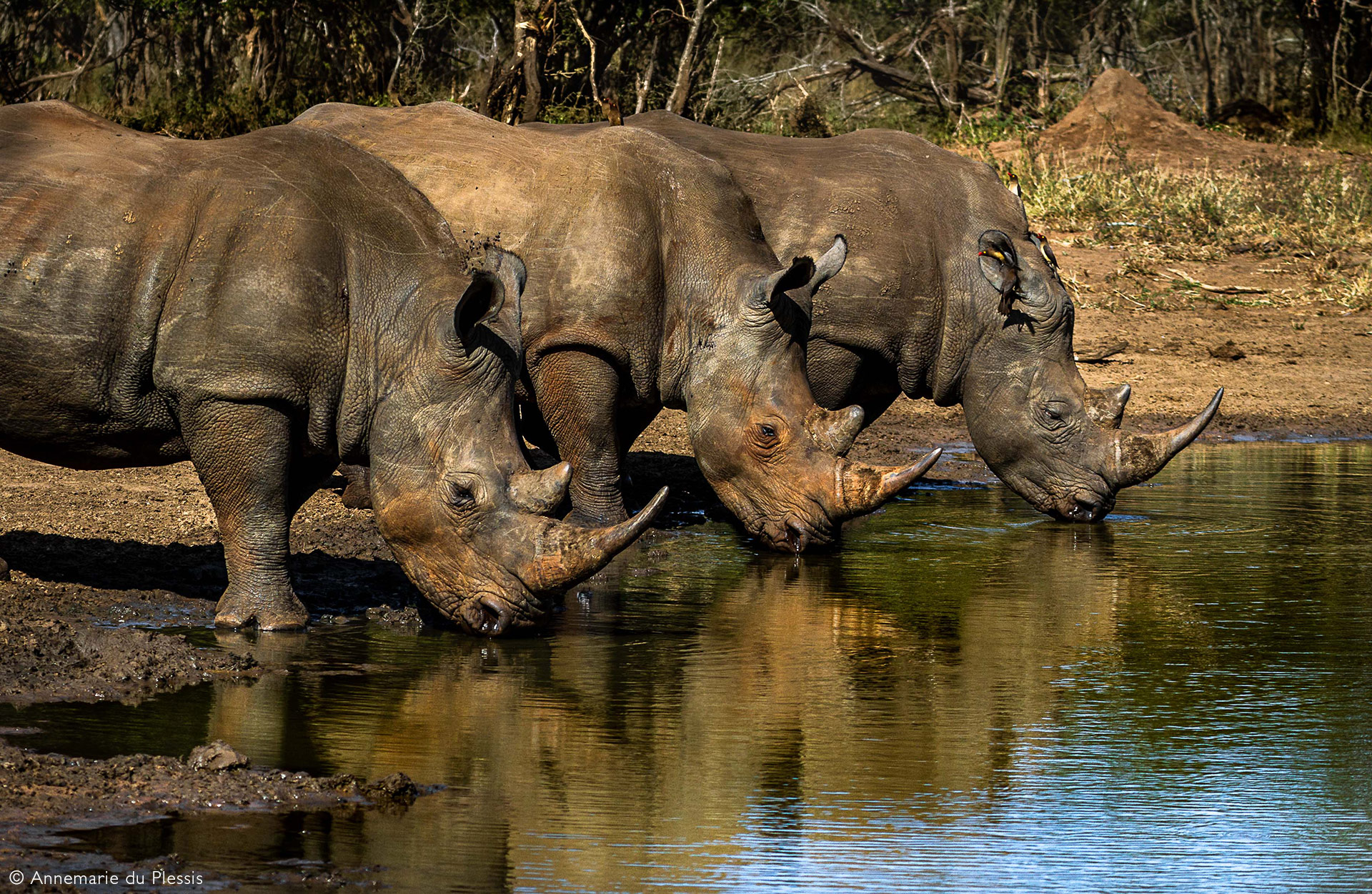 And then it was over. She whirled around in a cloud of dust less than two metres from us, turning in an impossibly tight circle, and trotting off with a surprising amount of dignity. Certainly, more than I was capable of at that moment. When, eventually, my thoughts had cleared (and my knees had stopped shaking), I was filled with a profound sense of respect for the wild, her creatures and the little black rhino cow, later known as Elizabeth, so determined to assert herself.

The conservation world is almost saturated with the tragic reality that ego and greed have desecrated the populations of one of the world’s most iconic animals. Innocuous lumbering giants made vulnerable by their size and an absurd human obsession with their keratinous horns, the very future of the planet’s rhinos hangs very much in the balance. An unfortunate consequence is that in many ways, the wave of polarized debates, heart-breaking stories and fury-inducing news items inevitably detracts from the fascinating ethology of one of the world’s largest land animals. What follows is a celebration of Africa’s rhinos – their characteristics, peculiarities, and nuances. 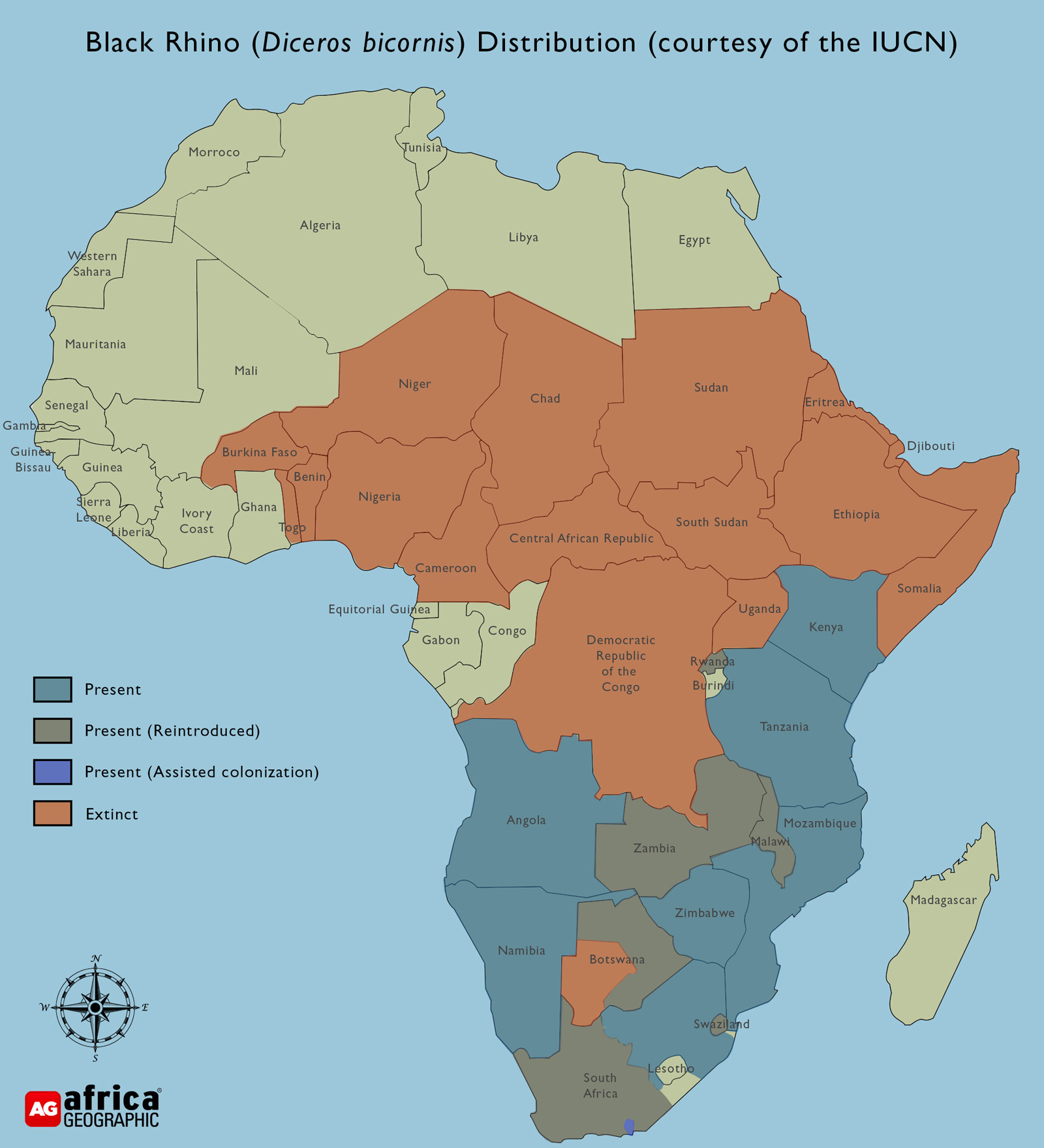 The two Africa species: the black rhino (Diceros bicornis) and the white rhino (Ceratotherium simum) are further divided into subspecies depending on their distribution, some of which are now either extinct or survived only by a handful of individuals (such as the northern white rhino or the western black rhino). As is so often the case where subspecies distinctions are concerned, there are different classification approaches and levels of disagreement within the scientific community as to where the distinctions should lie. 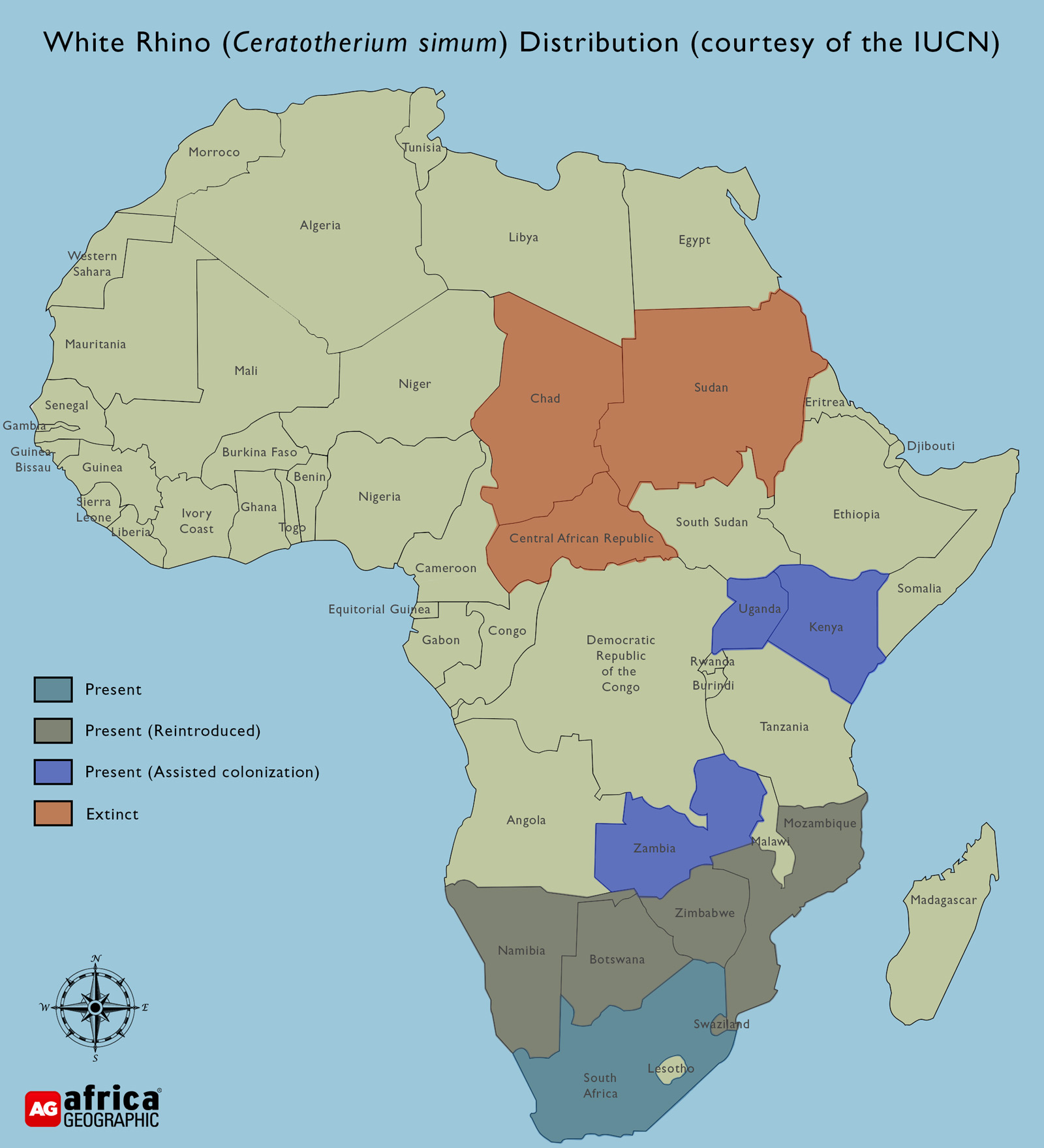 Equally contested is the explanation behind the names “white” and “black” describing the two species. For many years, the convenient and widely-accepted explanation was that the name “white” resulted from an Englishman’s misinterpretation of the Afrikaans word “wyd” (in Dutch, “wijde”, meaning wide) used as a description of the white rhinoceros’ characteristic square upper lip. According to this particular theory, the name for the black rhino followed naturally from there. Unfortunately, however, Middle Dutch linguistic experts have disproved this – “wijde” was not used as an adjective to describe body parts of either humans or animals. While there are several other theories, often involving the soil types of the areas where notable biologists were studying these newly observed behemoths, there may never be a definitive answer as to why two grey animals found themselves thus labelled. 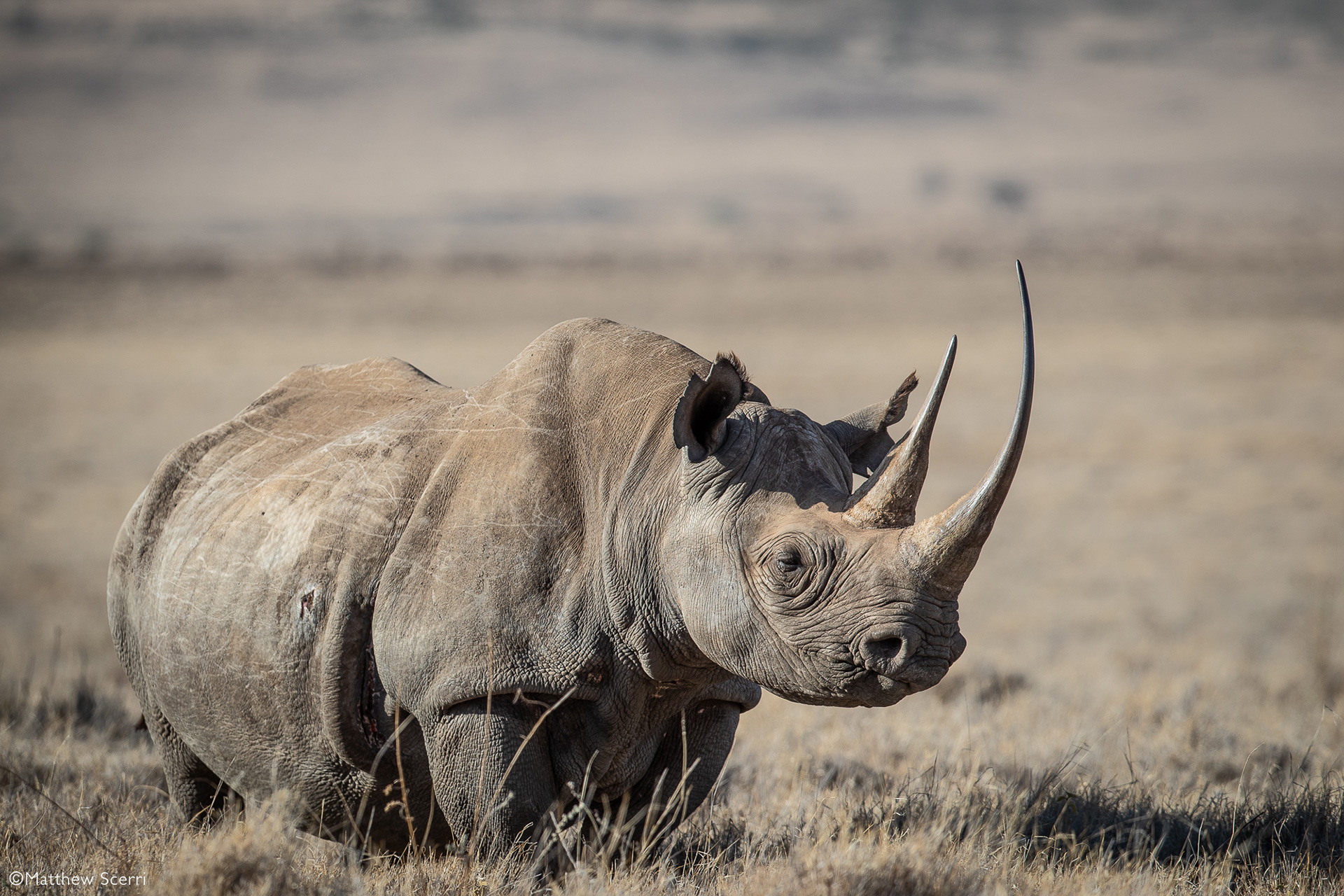 White and black rhino have very distinct behavioural reputations. For the most part, white rhinos are seen as more placid while black rhinos are often described as more solitary, unpredictable, and even cantankerous or capricious. There are certain truths to these generalizations, but, as is the case with any wild animal, individuals have unique personalities and variations exist under different circumstances. As the less numerous of the two species, and with a preference for dense habitats, black rhinos are often more skittish due simply to a lack of exposure to people and vehicles.

Both black and white rhinos have a relatively flexible social structure that changes throughout their lives and is determined by the sex of the individual. The mature males of both species are usually territorial and generally solitary, spending a large portion of their time patrolling territorial boundaries and refreshing existing scent marks. The females are more social and often form loose aggregations of up to ten or more individuals. These herds (or “crashes”) consist of combinations of females, sub-adults and calves and the individuals therein may or may not be related. Rather than defending territories, cows move through large home ranges depending on seasonal food and resource availability. Mature males occasionally associate with these groups and are mostly tolerant of other young males approaching maturity, provided these sub-adults show the requisite submission and respect. 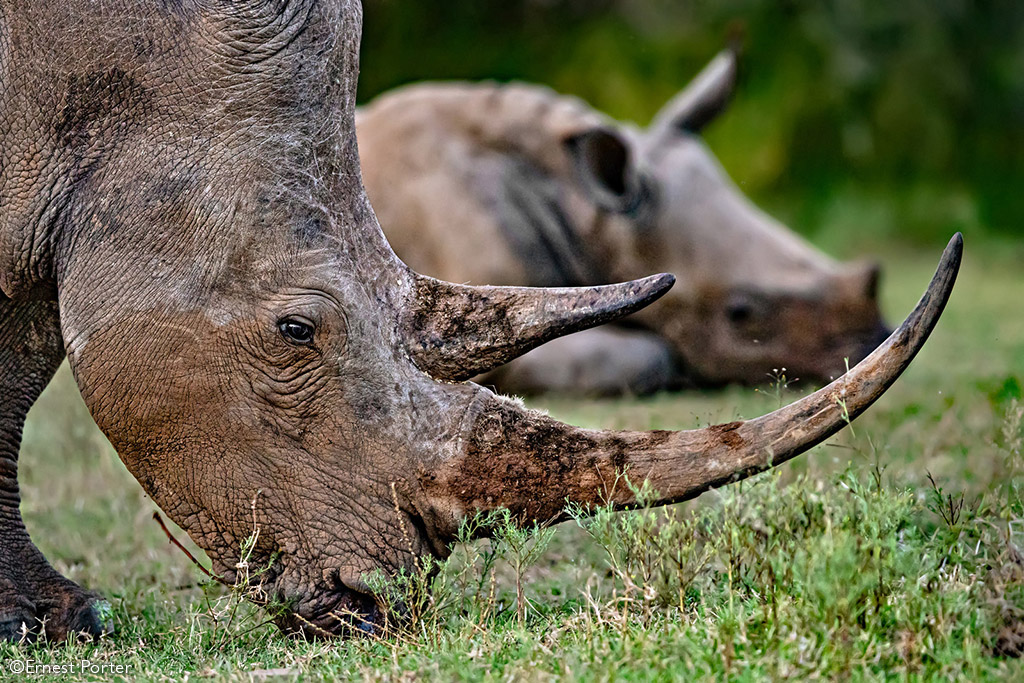 For an animal with excellent olfactory capabilities, it is only natural that much of their long-distance communication is through scent secured in middens. Any rhino passing through will deposit his or her dung to the pile, using chemical signals to indicate age, sex, and reproductive status. Territorial males will also mark these middens and other landmarks by spraying urine and scraping their feet through the scent. In areas where they overlap, both black and white rhino will readily use the same middens.

For more immediate interactions, rhinos rely on body language cues and a surprising vocal range of squeaks and groans that sound bizarrely similar to whale noises to the human ear. Research has also shown that white rhinos (and likely black rhinos) can communicate through low-frequency rumbles below the range of human hearing, like elephants.

While conflicts between mature males are often decided based purely on posturing and intimidation displays, there are times when two evenly matched competitors will come to blows, sometimes battling intermittently for days at a time. When the fight is over a cow in oestrus, these jousting matches can result in serious stab wounds and, on rare occasions, may even prove fatal.

While on average the bulls are larger than the cows, the females are far from defenceless themselves, and they may reject the advances of prospective suitors for days at a time until the cow is satisfied that a better prospect is unlikely. During this protracted courtship, the bull is extremely possessive of the female and may view almost anything as a potential threat to his mating rights, including the cow’s current calf. A calf is usually around 18 months old when its mother comes back into oestrus once again and is typically still suckling, so this process can be exceptionally traumatizing. In some instances, the bull may even injure or kill the calf, despite the mother’s protective efforts. 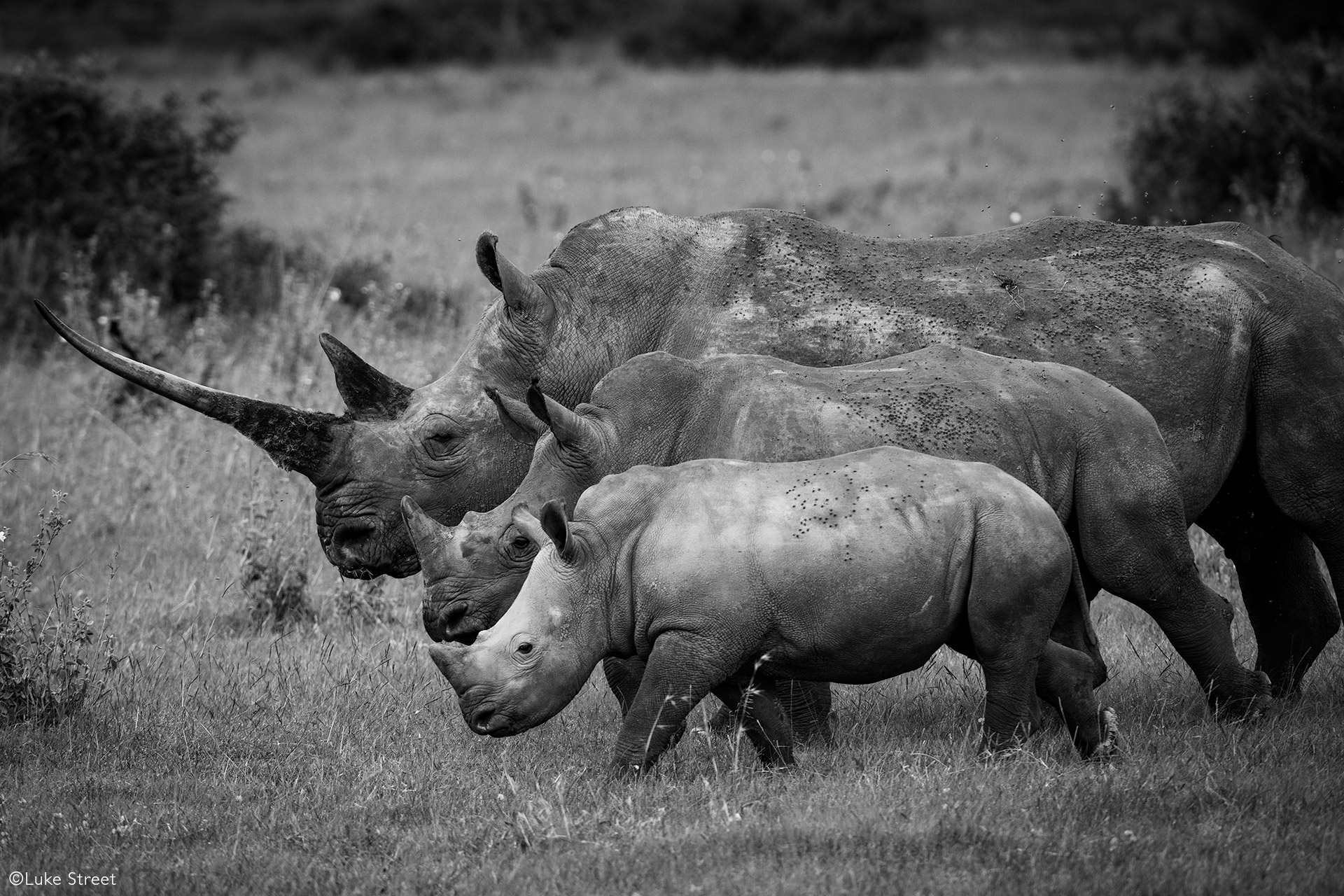 After a gestation period of just under a year and a half, the cow moves off on her own to give birth and usually remains alone for several days or weeks before re-joining other rhinos. For those with a current calf, now around 2.5 to 3 years old, this means first breaking the existing bond. One can only imagine the confusion a young rhino experiences when, overnight, its once loving mother becomes completely intolerant and drives it away, impervious to its desperate and indignant squeals. When the cow is comfortable that her new calf is ready, she may once again tolerate the presence of the older calf, though their relationship is never quite the same.

Rhino calves are one of the most beguiling creatures imaginable – all ears and over-sized feet. They are almost puppy-like in their behaviour – scampering, gambolling, and bounding around their indulgent mothers before falling into an exhausted sleep. A protective mother weighing more than a ton is generally sufficient to deter most predators and natural calf mortalities are relatively rare – only lions and spotted hyenas have enough numbers to overwhelm the mother’s defence. Even then, it generally is not worth the effort.

Sadly, the same cannot be said for humans because rhino horn has a perceived value of over $60,000 per kilogram. The extent of the poaching crisis is beyond the scope or purpose of this article but so often hidden under devastating statistics is the profound loss of individual animals, unique in their characters and personalities. Beyond their importance in the ecosystem, those who have spent time with rhinos come to know just how different each rhinoceros can be – from docile, confiding, or curious to grumpy and unpredictable. And while rhinos are not outwardly demonstrative in their affection, their social bonds are both important and extremely touching for those fortunate enough to witness them.

As for Elizabeth, no amount of courage or spirit could have saved her from the poacher’s bullet that claimed her life some three years after she gave me the fright of mine. 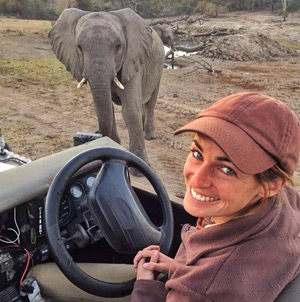 Jamie was born in Johannesburg and after completing her schooling in South Africa, spent three years at the University of Cambridge studying law. On successfully finishing her honours, she returned to South Africa and decided to head into the wilderness where she has worked as a research guide and television presenter. A desire to tell Africa’s stories as they deserve to be told led her to Africa Geographic, where she now works as the scientific editor.