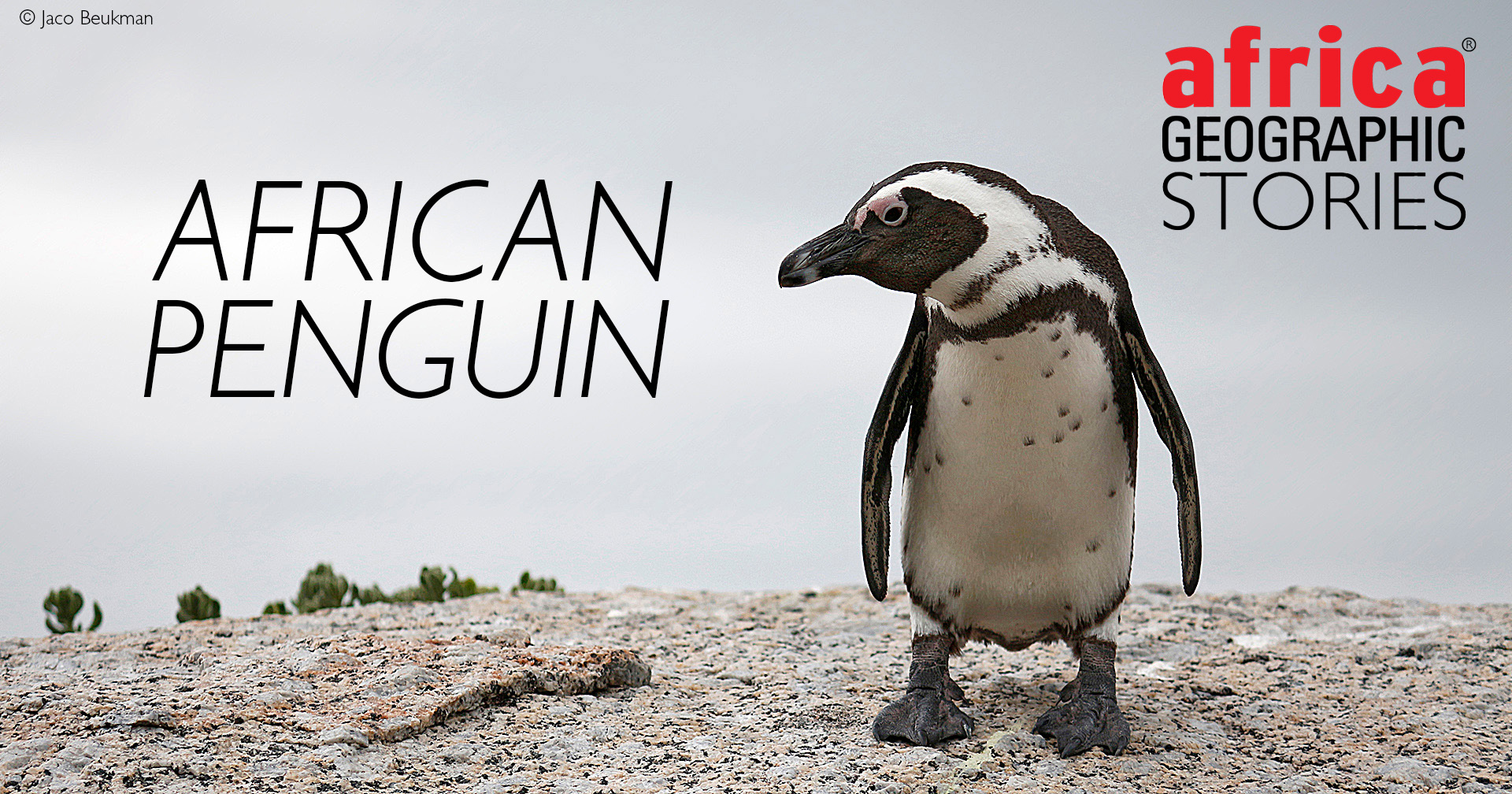 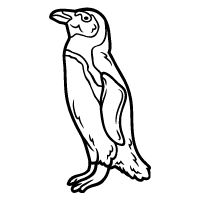 For most people, “penguin” immediately brings to mind an image of hunched figures huddled together, braced against the icy winds of the long Antarctic night – possibly accompanied by the soothing tones of David Attenborough. It is not a word that conjures the image of tuxedoed little birds sharing their space with bikini-clad summer holidaymakers on the sweltering beaches of South Africa. And yet, that is precisely what thousands of tourists flock to see: the endangered African penguins of the Cape. 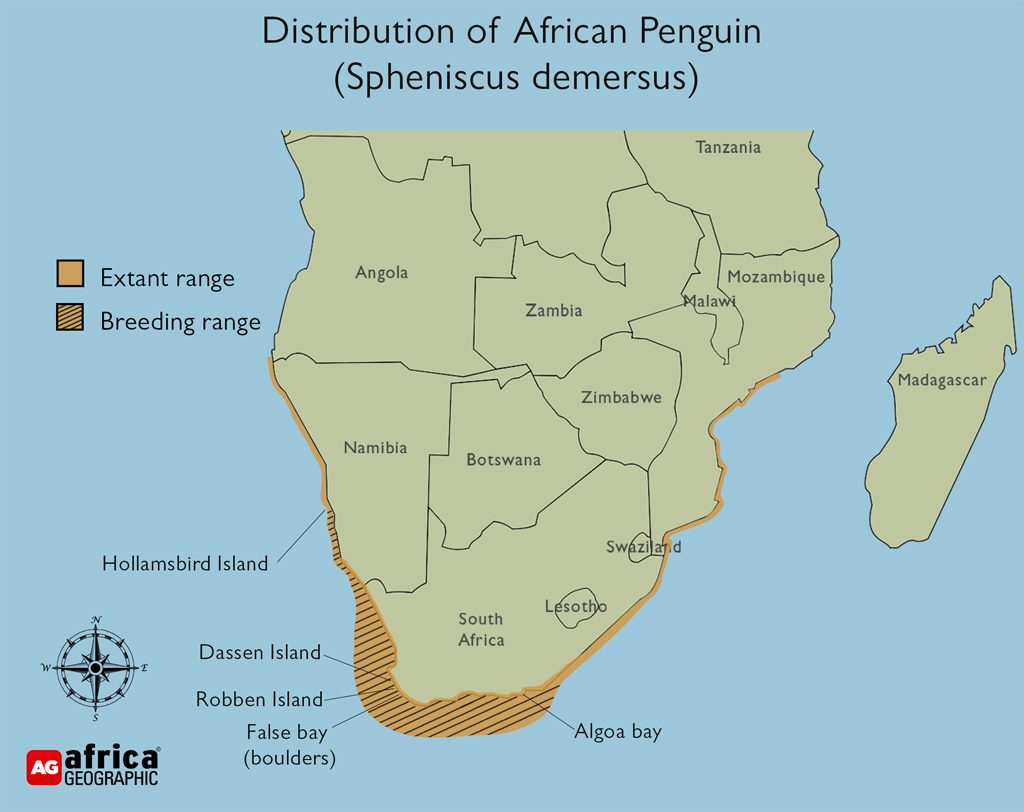 The African penguin (Spheniscus demersus) is found on the southwestern coast of Africa in established colonies on 24 different islands and rocks off the Namibian and South African shorelines. While they breed within this range, their presence has been recorded as far north as Gabon and Mozambique. Historically, penguins avoided mainland nesting sites due to the risk of large-animal predation, particularly by leopards, caracals and jackals. However, a burgeoning human population reduced potential threats and kept large predators at bay. As a result, the first trailblazing penguin pairs began to nest on the mainland around forty years ago. Today, the two best-known mainland colonies are in South Africa, one at Boulders Beach in Simon’s Town and the other at Stony Point in Betty’s Bay.

The penguins proved to be quite happy to adapt to life among people, and from one breeding pair in 1985, Simon’s Town now welcomes over 1,000 couples every year. The penguins merrily trundle over beach blankets, walk the town’s streets, nest in gardens and irritably snap sharp beaks at ankles that stray too close to their eggs. Presumably unconcerned by their own celebrity, these charming little characters all but take over the town, attracting droves of visitors eager to observe their Spheniscidae antics.

Observers are well-rewarded because the penguins are endlessly entertaining. Part of their appeal is that they are easy to anthropomorphise. Their black-and-white markings are positively debonair, and the bare pink patch of skin (which has a thermoregulatory function) gives the impression of cynically raised eyebrows. Touchingly, African penguins are monogamous, often returning year after year with the same partner to raise the next generation as a dedicated team. They are also innately comical. Though webbed feet and flipper wings are perfect for the open seas, they do not make for good land legs, and African penguins are endearingly clumsy when out of the water. Throw in the donkey-like bray of their call (hence the former name, the jackass penguin) and the scene is set for genuine amusement.

Yet as delightful as the tableau of beaches packed with penguins may be, the truth is that African penguins face a sobering future. Their populations are believed to be just 2% of what they were at the start of the 20th century, and a 2019 count yielded a historic low of less than 21,000 breeding pairs.

Quick facts about the African penguin

The penguins’ decline over the past century can be partly attributed to the horrendous exploitation of their eggs, which were enjoyed as a delicacy by their thousands until the 1970s. However, the population has declined by over 65% in the last twenty years. One of the primary reasons for this is the decrease in prey availability due to climate change and the commercial overfishing of the oceans. African penguins hunt oil-rich pelagic fish species such as sardines and anchovies but are increasingly reliant on squid, octopus, krill and shrimp to supplement their diets.

A food shortage can be particularly detrimental before and after their moulting period. Once every year, adult penguins undergo a so-called “catastrophic” moult. They return to land to replace old and damaged feathers with a new, healthy covering of insulating, waterproof plumage. This process takes two to five weeks, during which the penguin is totally land-bound, dishevelled and understandably cantankerous. Unable to hunt, they will lose 40-50% of their body mass before returning to the water. To survive this ordeal, they must bulk up ahead of time and work hard to recover condition afterwards. And they have to travel further and further to find the food they need.

All hands (and flippers) on deck

Complete with a brand-new suit, the next arduous mission can begin. Finding a mate is the first order of business for newly fledged adults (aged four to six) ready to breed for the first time. A suitable partner is wooed by a complex dance of head twisting, bowing and beak tapping. If the seduction is successful, the honeymooners search for a suitable nest site. The pressure on this budding relationship is substantial: if breeding fails for any reason, the penguins waste little time laying blame and separate in search of a new partner.

Unlike their cousins in Antarctica, the African penguins are more concerned with keeping the eggs safe from scorching temperatures and blazing sunlight. The thick layers of guano on the islands provide the perfect nesting material, but sandy depressions, rock crevices, and manmade structures are utilised on the mainland. The best nesting sites (those with ample shade, or a cooling breeze, for example) are at a premium and aggressively defended by those couples fortunate enough to snag them. Penguin pairs that have established a successful nesting site in the past will opt to return to it year after year.

The female will lay one or two eggs, and the couple shares the 40-day incubation period, defending the eggs from seagulls, mongooses, and even other penguins (especially frustrated singles). The tiny chicks hatch as fluffy brown bundles with white bellies, ravenous appetites, and disproportionately prominent voices. Their parents will take turns heading out to hunt, braving tides, rocks and hungry Cape fur seals to return with a massive belly full of fish. It is a dangerous journey, and on occasion, one parent may not return, leaving their now solitary partner to raise the chicks as a single parent.

The first chick to hatch will always be the stronger of two siblings, but unlike birds of prey, penguins often successfully raise two chicks from one clutch. The younger sibling may have to wait for an older brother or sister to leave home before they can monopolise their parents’ attention. However, dwindling food supplies have placed increasing pressure on parental penguins, and under dire circumstances, the second chick may be left to starve.

A growing penguin chick fed on hearty meals of regurgitated fish porridge can fledge in as little as 60 days and join its peers on the beach in a crèche. Here they will gather their courage (and learn the tidal ropes) before setting out for a few years spent predominantly at sea. In the open waters, they will encounter fish for the first time and will have to learn the group hunting techniques practised by the adults. This oceanic initiation claims about 60% of all fledgling penguins. The survivors return to land to moult and grow their adult plumage, complete with a fingerprint pattern of black spots on their white undersides.

Between the devil and the deep blue

Unsurprisingly, the beguiling African penguins have won over thousands of ardent fans since they first waddled onto the mainland. Several organisations are working hard to halt the population decline. This conservation work involves everything from monitoring and studying existing colonies to dealing with once-off disaster events like oil spills from tankers.

SANCCOB (the Southern African Foundation for the Conservation of Coastal Birds) takes in around 1,000 birds annually. Abandoned chicks are hand-reared, and sick or injured birds are treated and released back into the wild. In addition, BirdLife South Africa’s African Penguin Conservation project, in partnership with SANCCOB and CapeNature, is working to establish a breeding colony at De Hoop Nature Reserve, with successful breeding milestones already achieved in the project. (You can read more about their project and contribute to this work by logging into our app. If you do not yet have our app see the instructions below this story.)

Naturally, the African penguin’s most crucial conservation concern is competition with commercial fisheries and subsequent declining fish stocks. Fortunately, the industrial fishing ban around False Bay dating back to the 1980s has dramatically benefited the penguins of both Simon’s Town and Stony Point. A temporary restriction around Robben Island was also shown to improve breeding success rates.

Penguins are usually present and may be encountered year-round at Boulders and Foxy Beaches in Simon’s Town and Stony Point Nature Reserve in Betty’s Bay. However, many adult birds spend their time at sea outside the breeding season. The best penguin viewing starts during the summer (around December), and by April, the breeding season reaches its zenith, and the beaches and surrounds are packed with besuited penguins. In South Africa, most penguins moult between September and January, making this the best time of year to encounter them in various states of déshabillé.

It is important to remember that as comfortable as the penguins are waddling among people, they should be given the appropriate space and respect. African penguins may be cute, plucky, sassy or any other number of anthropomorphic adjectives we can think of, but they are still endangered wild animals. And they have razor-sharp beaks.

For more on the work being done to save the African penguin, read Penguins: What’s being done and how you can help