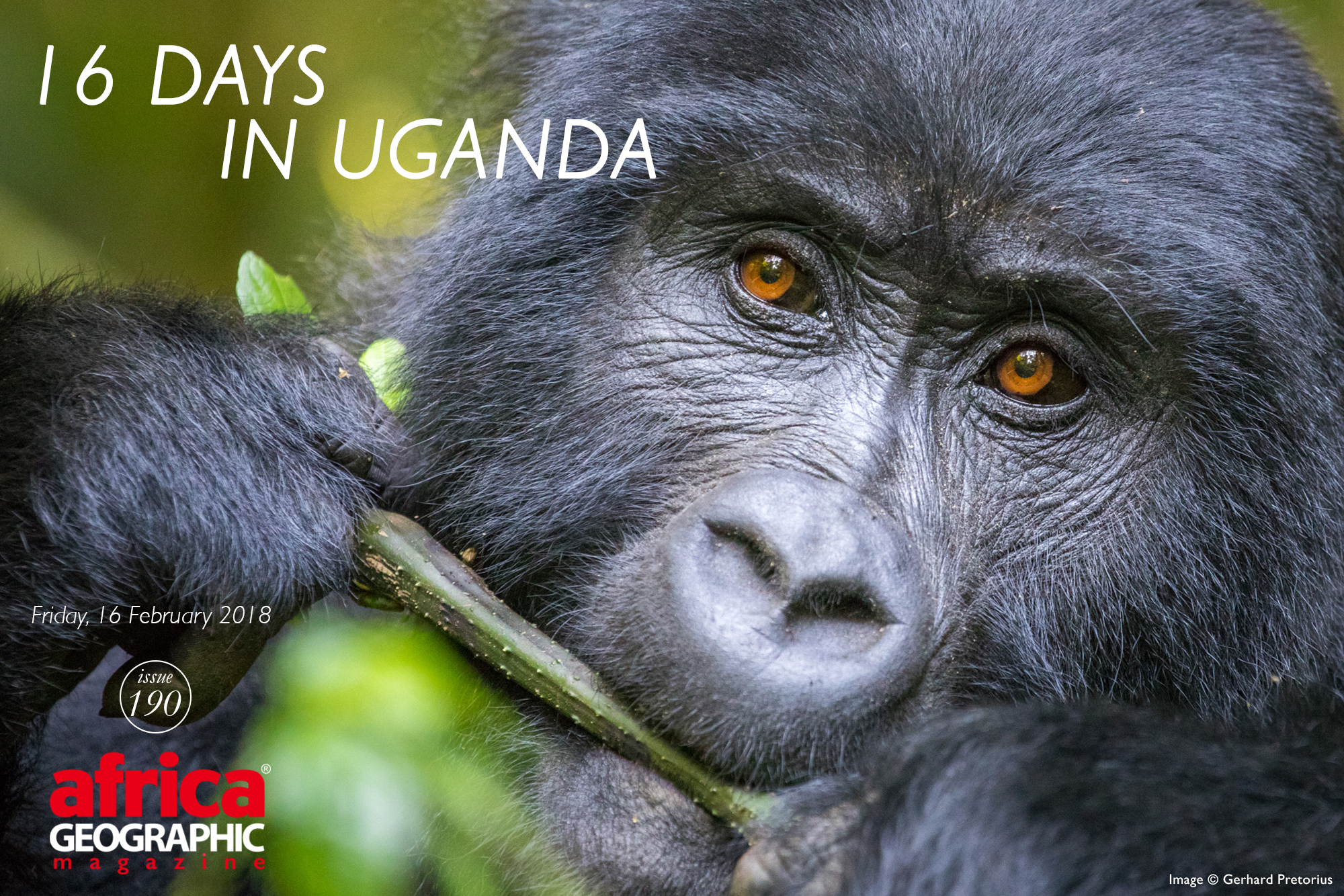 Trekking Uganda – 16 years in the making

It was in the early 2000s when my father started seriously talking about gorilla trekking as one of his bucket-list adventures. But it would take another 16 years of reading, research, and reluctance before it would finally become a reality. Finally, on the 1st of July 2017, my father, along with my two brothers, sister-in-law and I set off from Cape Town to Uganda for an incredible 16-day cross-Uganda trip, arranged by Africa Geographic.

After touching down at Entebbe International Airport and clearing customs, we were met by Bosco, our driver and tour leader, and Gerald, our birding guide.
In total, our party was comprised of seven relatively fit and avid lovers of the bush, eager for a Uganda adventure of a lifetime, and the opportunity to spot some of the rarest wildlife on the planet.

Uganda is landlocked with more than 15% of the country covered by lakes. This leaves relatively little space for its 40 million people. As much as 90% of the agriculture is subsistence farming, and driving through the country, you’ll see everyone from children to adults working the land, growing bananas, coffee, tobacco, tea, groundnuts, cassava, more bananas and other staple starches. You get the distinct sense that they’re not doing it to make a living – they’re doing it to survive.

Every town in Uganda has a bustling pavement economy which means you’re never far from a local market, street-side butchery, pork joint, liquor shops or bodabodas. Bodabodas is the nickname for the millions of cheap Indian motorcycles used by East Africans to cross borders, transport produce, and commute.

Everywhere you go in Uganda you’ll see them, but it’s predominantly men who drive them as in some parts of the country women are discouraged from driving them or, as our guide put it, not allowed to.

And amidst this organised chaos, people are warm, friendly and seem content. You’re made to feel welcome and safe to wander around freely.

Searching for the prehistoric shoebill

From day one we set off to see as many as possible of the 1,100 bird species that Uganda has to offer, and eventually, we succeeded in ticking off just over 400. But for the first and foremost on our list, we went wading through the waters of the Mabamba Swamp – roughly two hours west of Entebbe – one of the world’s last remaining habitats for shoebills.

The swamps are navigated with old wooden boats fitted with outboard motors and oars (for when the boat inevitably gets stuck in some of the shallow, overgrown canals). Each boat has a captain and spotter who are in contact with the other boats via cell phones, trying to locate the elusive species.
It took a little over two hours, but finally, we got word that there was a shoebill spotted about a 30 minutes’ ride away. The odds were slim, but we took the chance, and it paid off.

Whatever preconceptions you may have of seeing a shoebill up close and in the wild, forget them. If you’re fortunate enough to find one (many people travel from across the globe without any luck) you’re hit by an overwhelming sense that this is a distinctly prehistoric creature. An animal that has laid claim to the slowly disappearing environment it lives and breeds in far before we humans imposed. It’s this dichotomy of awe and compassion that makes the moment you see a shoebill one that will be with you forever.

After ticking off the shoebills, we headed north to the Masindi District. It’s a long drive from Entebbe, and even on a Sunday, the Kampala traffic can be a bumper-to-bumper nightmare. But once you break through the city and hit the road, you get to take in the ever-changing landscape and spend time with your guides, learning more about the people of Uganda.

The Masindi district is home to two of Uganda’s biggest attractions, Murchison Falls and the Murchison Falls National Park. Undoubtedly this is the main reason most visit the district, but it’s also a wonderful place to see how the locals earn a living.

The area in and around the Murchison Falls National Park has plenty of accommodation, and staying on the banks of the River Nile is the way to go. A word of warning though – hippos often roam through the camps when they come out to feed at night.

Other wildlife to spot in the park includes patas monkeys, Ugandan kob, hartebeest, buffalo, elephant, the very rare Rothschild’s giraffe, and lion. You can also drive along the banks of the Nile, which offers more birding opportunities.

Murchison Falls is not to be missed. It’s the world’s most powerful waterfall where the White Nile is funnelled through a 7-metre wide gorge, at a rate of 300 000 litres per second, and plummets 45 metres. It’s worth visiting the falls from the top (by road) and booking a cruise to approach it from below as well to get a sense of its awesome power.

The Murchison Falls National Park is reached by crossing the Nile with a ferry and best done early in the morning to avoid queuing.

Kibale National Park is one of the best places to visit for chimpanzee trekking, and with approximately 1,450 chimps in the forest, about 120 are habituated. As ready as we were, we soon discovered that coming face to face with a chimpanzee or mountain gorilla isn’t something you can ever really be prepared for.

It’s a lot like unexpectedly running into an old friend you haven’t seen in years, or being startled by your reflection. For a moment, you freeze as you try and make sense of it all. Simply put, it’s impossible not to be moved.

We spent a full day with two different chimp groups. We saw elders with grey beards, dominant alpha males, and females with newborn babies. But we saw more than just wild animals. We saw intelligent beings that use language, tools, and make a ‘home’ to sleep in come dusk. We saw a society. We saw a family.

Photographing them made it even more evident. There’s everything you’d find in a human face: emotion, thought, intelligence, and something mysterious. It was more like taking photos of people than of wildlife.

Whether you set off on your gorilla trekking from Ruhija or Buhoma, there’s no way of knowing how strenuous your hike will be.

It’s down to luck. You could either be drenched in a torrential downpour and hike for several hours up and down muddy slopes. Or, as in our case, you could stay dry and have a short hike the one day, and a long hike the next. One thing’s for sure, the Bwindi Impenetrable National Park truly lives up to its name.

It’s one thing expecting to see a gorilla at eye level, but seeing a 220kg silverback perched 20 metres up a tree, breaking branches the width of your arm as if they’re twigs; or a month-old gorilla play aimlessly, but under the watchful eye of its mother – there are no words. There’s just pure awe.

When it comes to photographing mountain gorillas, one of the hardest things was deciding which individual to follow and focus on. You simply don’t have enough time to capture all of them. In the end, whenever they were too far or too close, or moving too quickly for a decent shot, the best thing to do was just to enjoy the moment. To simply be with them and connect.

Lake Mburo National Park seems to be suffering from low game numbers due to poaching and as a result of the encroachment of farmers on wildlife habitat. When we visited, our guides told us only one lone male lion remains in the area.

The park itself is home to leopard, zebra, giraffe, buffalo, and many other antelope species. For birding, visiting Lake Mburo itself is a definite must. Cruises during the early morning and late afternoon magic hours get booked up quickly, so plan in advance.

Some of the highlights include the elusive African finfoot, and ample opportunity to get up close with most of the common African waterbirds and wildlife such as fish eagles, pied and malachite kingfishers, monitor lizards, hippos, crocodiles, and more.

Uganda blew us away and we hope to return one day!

For Ugandan accommodation options at the best prices visit our collection of camps and lodges: private travel & conservation club. If you are not yet a member, see how to JOIN below this story. 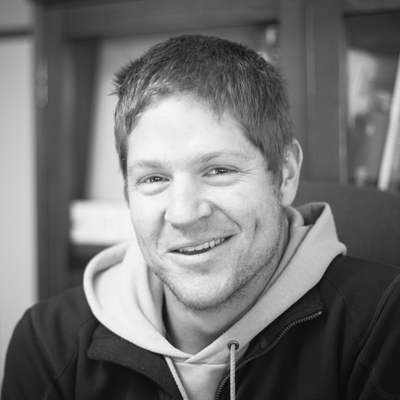 Born in Johannesburg, raised in Robertson, now living in Cape Town, Gerhard Pretorius writes, films, and photographs many different types of topics. He especially loves to travel and capture moments that will last a lifetime.