Wild dogs collared in the name of research

An alpha female has been re-collared and two young wild dogs collared for the first time in the 13 member-strong pack at Liuwa Plain National Park in Zambia, in anticipation of a natural split in the group. 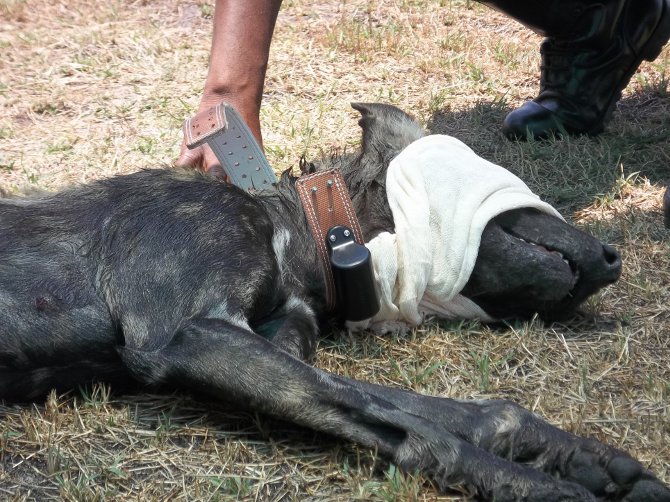 The VHF collars fitted to the three dogs will enable researchers from African Parks and the Zambian Carnivore Programme (ZCP) to track them within the 3 660 km² expanse of Liuwa Plain. Wild dogs typically cover between 5 to 10 kilometres per hunting period, hunting twice a day early morning and late afternoon into the night. Without collars it is difficult for researchers to keep abreast of their movements. The satellite collars fitted to the dogs will function for three years.

In order for the collars to be attached the dogs were first sedated. The tranquilising darts were fired at close range by an experienced wildlife veterinarian and took the standard 5 to 10 minutes to take effect. The closer the darter to the animal, the less velocity required which ultimately means a softer impact for the animal. The collar was attached on each animal while it was unconscious. Once the collar had been fitted and a health examination completed, a reversal drug was administered to induce consciousness. During the procedures each of the dogs was carefully monitored and a check kept on their vital signs by the veterinary and research teams. Water was also applied regularly to their coats to help keep them cool.

The entire process from the initial darting to recovery took approximately 30 minutes per wild dog. The veterinary and research teams remained with each dog while it emerged from its “wobbly” stage, until it was evident it had made a total recovery.

The Liuwa research team, led by Jassiel M’soka and Egil Dröge from ZCP, is studying a range of wild dog characteristics and trends including their birth and mortality rates, their hunting efforts and successes, and kleptoparasitism (a form of feeding in which one animal takes prey from another) by hyena and lion. The ZCP team is also investigating the behavioural impact wild dogs (and other predators) have on their prey species.

“At Liuwa our study of wild dogs is researching their effect on their main prey, namely wildebeest, zebra and oribi. From other studies it is known that predators can affect the body condition, including the fertility rates, of their prey,” said Dröge.

Egil Dröge and his team are convinced that the pack will split. “They have to” he said, “Currently there is no breeding potential within the pack as it consists of the alpha female and her offspring from 2012. The offspring from 2010 all left earlier this year in three different groups while the offspring from 2011 sadly died in a natural fire at their den. The alpha male died last year during the denning period.” He believes that the current pack of 13 will probably split into three to five groups and pair with other wild dogs in Liuwa to form new packs.

Research of Liuwa’s wild dogs began in 2010 and is on-going.