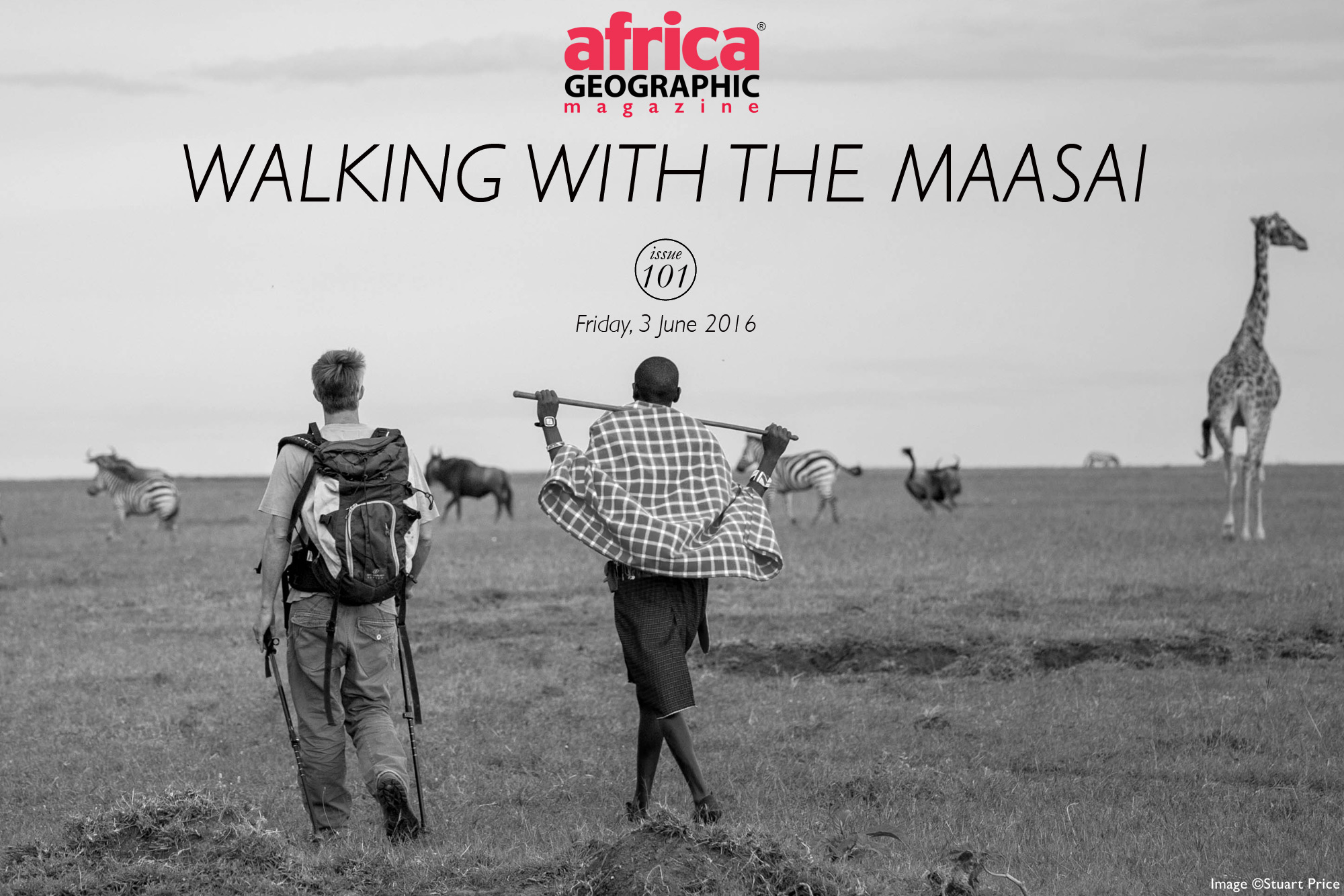 It was July 2014, and I was in Kenya’s Mara North Conservancy having a cup of tea and a homemade scone (yes, really!) with the manager of one of the Maasai Mara. We got chatting about hiking, and he told me how just that morning he’d walked for miles through the conservancy. This was a revelation for me.

My experiences of bushwalks in much of East Africa were generally confined to very brief strolls close to the safety of the camp. And now here I was being told it was entirely possible to hike for hours, or even days, across these wildlife-filled savannahs.

That evening I casually mentioned the conversation to my wife and, to my surprise, she suggested that I should come back to the Mara area one day to “spend a while walking and staying in Maasai villages and then write a book about it.” It was at that moment that the idea of the Walking with the Maasai project was born, to gain a deeper understanding of contemporary Maasai life and the impact of the 21st-century trends, conservation, political pressures and tourism on them.

In May 2015, a year after my tea and scones conversation, I set off on a five-week walk across a part of Kenya’s Maasai lands with Josphat Mako, a Maasai friend who worked as a guide in the Mara. Our walk began at the highest point of the Lebtero Hills, which are a densely forested, remote and very traditional corner of Maasailand. From here we walked westwards along the Kenya-Tanzania border to the edge of the famous Maasai Mara National Reserve. We hadn’t been able to get permission to walk through the reserve itself, so when we reached the edge of the reserve, we veered north and walked through community land until we got to the hot springs at Maji Moto. Here we turned south-west, then walked clean across the renowned Olarro, Naboisho, Olare Motorogi, Mara North and the Lemek wildlife conservancies, which are essentially private game reserves that together constitute some of the finest wildlife habitat in East Africa. Our walk eventually came to an end on the banks of the Mara River at the foot of the Oloololo Escarpment.

The point of this project was not so much the walk itself – especially as I don’t know how far we even walked – but rather the opportunity it presented for me to get to know the Maasai people and their culture, as well as the landscapes and animals that they live with. Before I set off on the walk, I vowed not to be tied to walking a certain amount of kilometres a day or sticking religiously to a predetermined route. I wanted to be able to deviate from a path as and when I felt like it to take in as many interesting encounters as possible.

Along the way we visited and slept in numerous Maasai villages and spent as much time as possible with the Maasai, interviewing them and learning what we could of their traditional culture and their contemporary lifestyles. But it wasn’t all about the Maasai. By walking at a leisurely pace, I hoped to also understand something of the landscapes and wildlife of the region. On the nights when we weren’t guests of the Maasai, we had the excitement of camping in the bush with the animals or, once we were inside the Maasai Mara conservancies where bush camping is banned. There were no villages to stay in; we stayed as guests at some of the safari camps, which gave me the chance to talk conservation and tourism with camp managers, guides, staff and field workers, as well as to visit some of their community projects.

Over the weeks, I interviewed dozens of people, and I always tried to keep my interviewees as broad in interest, and conflicting in views, as possible. If one day I interviewed a traditional Maasai healer then the next I spoke to a Maasai doctor working in a clinic. If one afternoon I sat in the shade of a tree chatting with a hunter then the following day I would meet someone working in the field of conservation. We met religious leaders, warriors, biologists, activists, scientists, artists, politicians, vision seekers, TV personalities, tourist industry representatives, shepherds, housewives and a host of others. I spoke to elderly Maasai about days past, and I listened, spellbound, as they recounted tales of cattle rustling, and hunting lion and ostrich with spears to prove their manhood. However, I also spoke to an equal number of young Maasai – the ‘Digital Maasai’ as the elders called them – for whom stories of the old ways were as exotic-sounding as they were for me.

If one thing became clear through all of these conversations, it was that Maasai culture was in the process of rapid change and that if I had wanted to catch the last of the old lifestyles, then I was probably ten years too late. Even the famous Maasai moran (warriors) were now almost a relic of a bygone age, and most of those long flowing locks of hair are now made of string, while the lion mane headdresses tend to be hand-me-downs from fathers and grandfathers. In fact, in the whole course of our walk we only encountered three or four genuine Maasai moran, and Josphat and Patrick, another Maasai friend I was walking with at the time, were so excited at meeting ‘real’ moran that they asked if they could take pictures of them on their camera phones. The moran declined!

For me, this clash of globalisation and the impact it’s having on Maasai culture was one of the most fascinating aspects of the walk. Still, of course, nobody can walk across the Maasai lands without wildlife featuring strongly.

Sometimes these wildlife encounters were simply fantastic. Walking for hours over the savannah as huge herds of zebra and wildebeest parted for us as we strolled by was undoubtedly a highlight. Walking also allowed us to see all the little creatures we’d have missed in a vehicle – the ants and tortoises, the butterflies and lizards. Other encounters were less heart-warming, though. Meeting the Maasai family who’d lost their three-year-old son to a leopard attack was the clearest such example. There were also the numerous families I spoke with who seemed caught in a never-ending cycle of conflict with hyenas, lions or leopards raiding their cattle bomas at night and elephants destroying their crops.

Over the weeks that we walked, we met dozens of conservationists, scientists and concerned individuals working hard to protect what’s left of Kenya’s wildlife heritage. That they’re doing a sterling job is undoubted. On my many previous visits to the Mara region, I’ve seen the landscapes and wildlife through the prism of a safari vehicle and through the eyes of whichever expert wildlife guide was with me at the time. After driving around the conservancies and the Maasai Mara National Reserve, I had always been left with the impression that these vast spaces were home to healthy populations of wildlife.

On the other hand, walking through those same areas opened my eyes to another reality. Protected areas that I had once imagined to be nearly endless suddenly appeared very small when I realised I could walk clean across a conservancy in a day. Human interference, though a part of the environment ever since man’s earliest ancestors first swung out of the trees, was undeniably intense and was having an increasingly severe impact. All around the edges of the protected zones land is being demarcated, and fences are going up, development is taking place, wildlife migration routes are being disrupted, human-wildlife conflict is increasing and, close to the Maasai Mara National Reserve itself, resentment against the reserve and conservation is substantial.

The importance of conservancies

However, in and around the conservancies, where local communities are more involved and gain more benefit from safari tourism and conservation, the attitude is generally more positive.

It’s no secret that populations of some species are crashing, and I knew all this before I set out on the walk. However, although I didn’t plan on any daring encounters with potentially dangerous animals, both Josphat and I had expected that we would bump into big cats, buffalos and elephants by walking so many kilometres over these grasslands – whether we liked it or not. But as the Mara River and the end of our walk came into view, I was struck by the overwhelming realisation that we had walked so far but had only encountered on foot one elephant, a handful of buffalo and not a single, solitary cat. When we mentioned this to older Maasai, the reaction was always the same – they shook their heads and told us how when they were younger they would encounter these animals on an almost daily basis as they walked with their cattle. They invariably told us that they had seen the number of animals falling over the years, but then, without fail, they always expressed surprise and dismay that after five weeks we had not seen a single lion as we walked.

If one thing became clear from our walk it was that there were a lot of very concerned people, Maasai and others, working to preserve Kenya’s wild places and wildlife. It was apparent to me that the conservancies could only be a good thing, but it was also clear that right now, they are simply not large enough. If we want to save the wildlife of the Mara ecosystem, then the conservancies need to grow and multiply, and they need to do so quickly, or there will be nothing much left to protect.

For accommodation options at the best prices visit our private travel & conservation club to view our collection of camps and lodges. If you are not yet a member, see how to JOIN below this story. 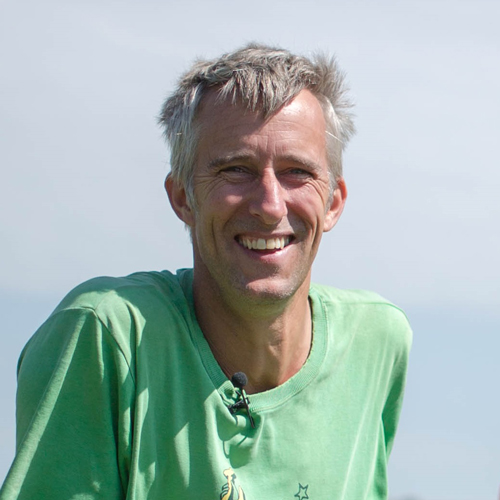 Stuart is a writer, photographer and the author of the Lonely Planet Kenya guidebook, as well as numerous other Africa and Asia titles for Lonely Planet, Rough Guides and Bradt.

Once We Were Lions, a book about this walk, the Maasai, wildlife and conservation will be published in late 2016. At the same time, a travelling photographic exhibition and a series of speaking dates by Stuart and Josphat will take place.