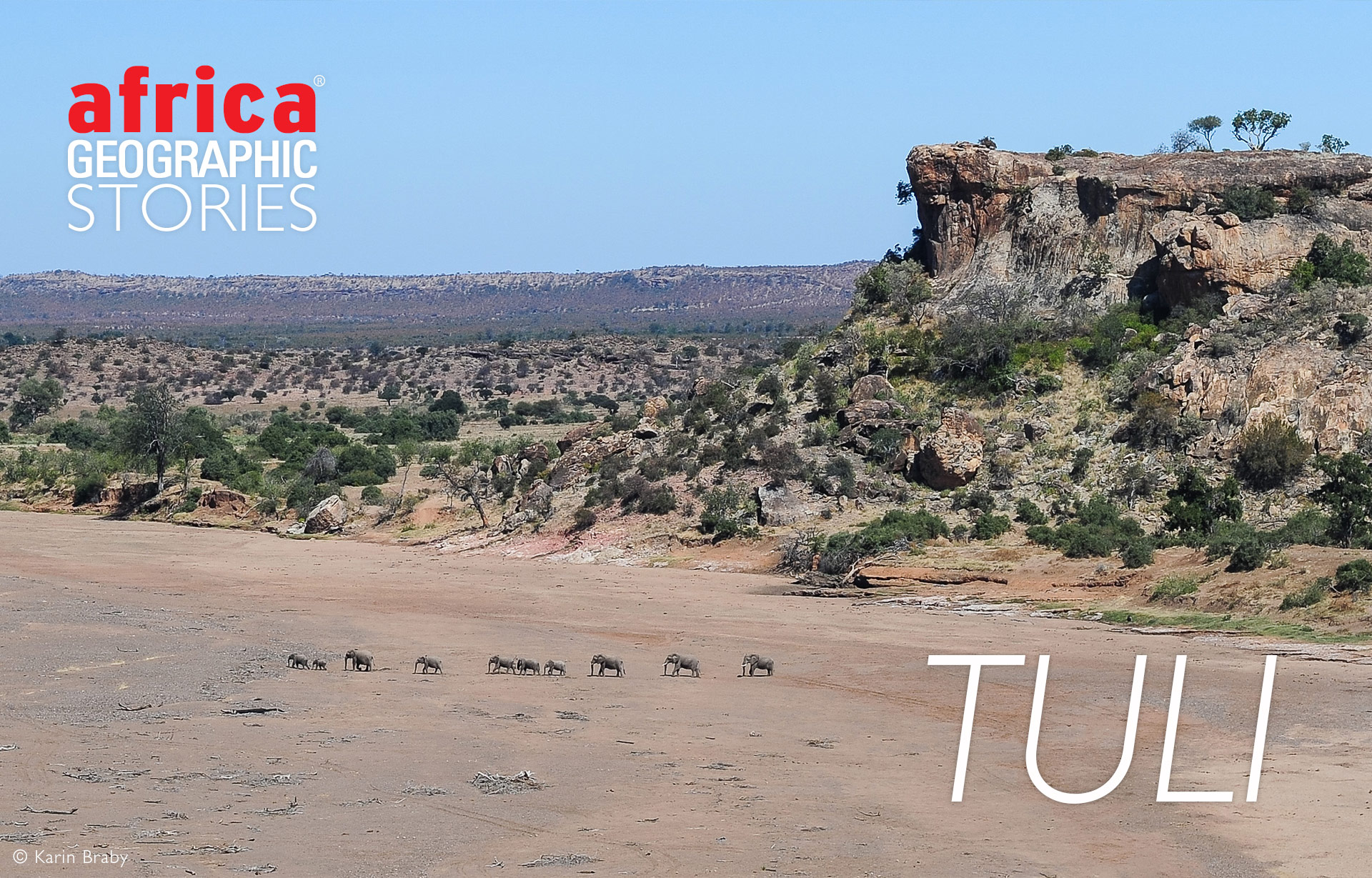 There is a special quality to the silence of Tuli. Indeed, it may be disturbed by the whisper of the wind, the rumbles of elephants or the distant echo of a lion’s roar, but beneath those sounds lies a blanket of silence so profound it stills the soul.

In this almost mystical atmosphere, there are strange ephemeral moments where past and present seem intertwined, and the existence of those gone before seems to flit over the red rocks and beneath the towering baobabs. It is a rough and rugged land where bloody history has taken its toll, but concerted effort has restored wilderness to a thriving landscape.

The Tuli Block is a narrow stretch of land in the southeastern corner of Botswana, sandwiched between South Africa to the south and Zimbabwe to the north and east. This strip of land has a colourful history and the Limpopo River, which forms its southern boundary, has born witness to it all.

The Tuli Block extends 350km along the Limpopo River, southwest from its confluence with the Shashe River. It comprises mixed-use, fenced and unfenced private properties of varying sizes. Some of these are farmed, some hunted and many offer photographic safaris. Rustic bush camps are set beneath ancient fever, Ana, nyala and baobab trees, offering budget escapes for intrepid travellers in search of unspoilt wilderness.

The most well-known and best-protected portion of Tuli is the Northern Tuli Game Reserve (Notugre) – a collection of 36 private properties to the east of the Tuli Block, including Mashatu Game Reserve, that are jointly managed for conservation and ecotourism. It extends across some 720km2 (72,000 hectares), making Notugre one of the largest private game reserves in Southern Africa.

The reserve is also a cornerstone of the Greater Mapungubwe Transfrontier Conservation Area, which covers nearly 6,000km2 (600, 000 hectares) and centres on the confluence of the Limpopo and Shashe. To the south of Tuli, across the Limpopo River international border, is South Africa’s Mapungubwe National Park, once home to the Iron Age kingdom of Mapungubwe. To the north and east, Northern Tuli is contiguous with the Tuli Circle Safari Area in Zimbabwe. 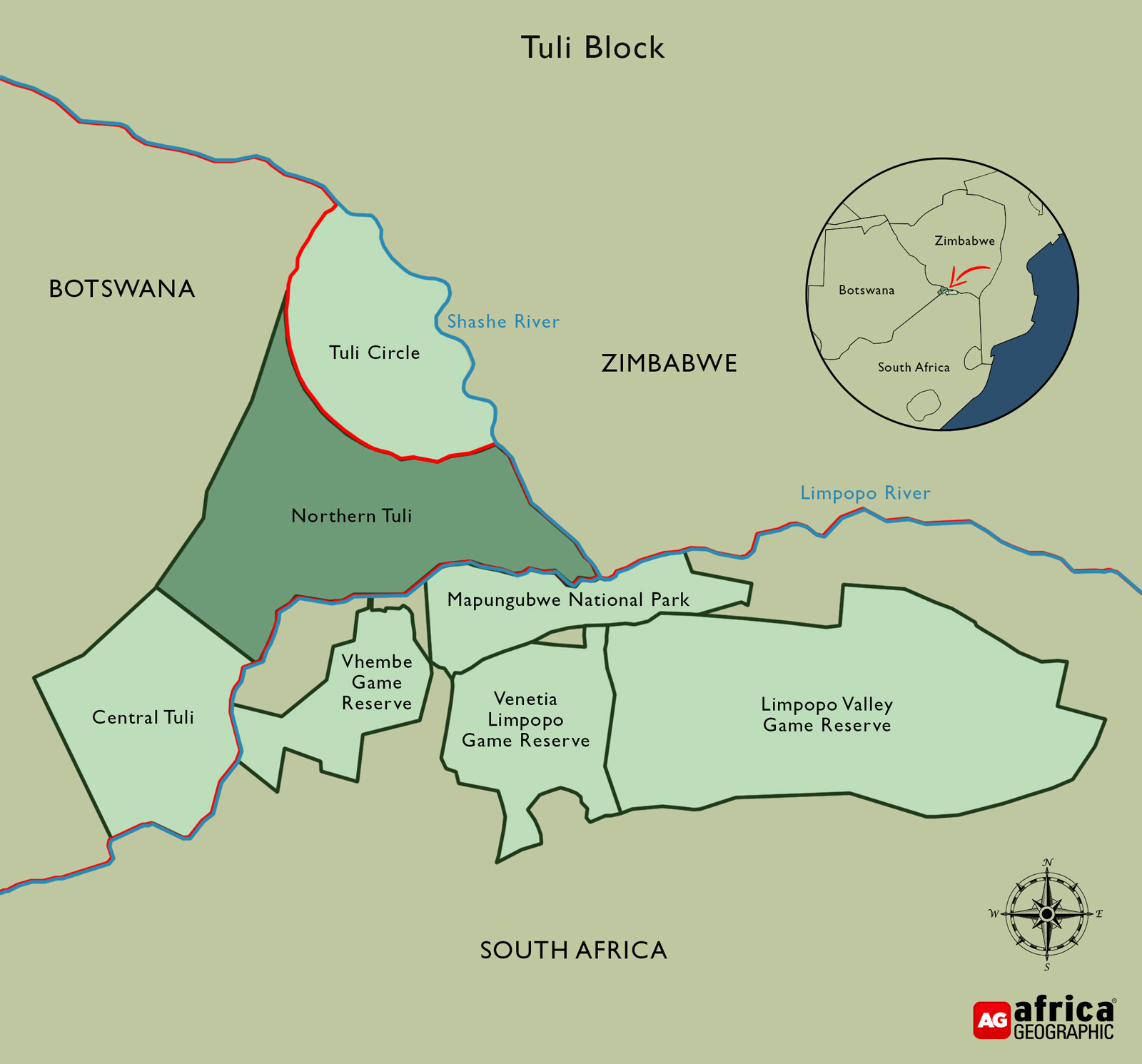 As might be expected for a region bordering three countries, Tuli is littered with reminders of a turbulent past – from ancient stone tools and San rock paintings to corroded ammunition casings, left over from wars and the passage of hunters.

During the late 19th century, Botswana was part of the Bechuanaland Protectorate under the United Kingdom of Great Britain and Ireland. At the same time, Cecil John Rhodes was looking for a suitable route for his envisioned “Cape to Cairo” railroad and petitioned to have the Bechuanaland Protectorate transferred to his company: The British South Africa Company. Alarmed by the potential consequences of the transfer, Chief Khama III of the Bangwato Tribe travelled to England to petition the Queen. He managed to win her sympathy but agreed to cede what is now the Tuli block to the company so that Rhodes could continue his railway plans. It is quite probable that Chief Khama III also hoped the presence of the company would keep out the advancing ‘Boers’ (a slang term often used for Afrikaans people, but which means ‘farmers’ when translated literally).

Rhodes quickly concluded that building a railway through Tuli would be a logistical nightmare and his focus shifted to more forgiving landscapes further west. Some of the northernmost battles of the South African War (Anglo-Boer War) played out in the Tuli Block – including the fight at Bryce’s store, the ruins of which lie on Mashatu Game Reserve.

As the dust settled in the aftermath of the war, the British South Africa Company sold off most of the property to commercial farmers. However, the rugged and inhospitable landscape proved to be largely unsuitable for cattle farming and, eventually, landowners began to turn to the idea of game farming and ecotourism. Cooperative efforts of conservation-minded owners saw the gradual return and reintroduction of wildlife, though buffalo remain absent due to strict foot-and-mouth veterinary protocols.

The trees along the riverine areas are an attraction in their own right. Massive, ancient leadwood and gangly apple-leaf trees contrast against the lush dark greens of the majestic nyala and weeping Boer-beans and dense stands of vivid, yellow-green fever trees. Away from the rivers, the landscape becomes less hospitable and more arid, though equally breath-taking. It is dominated by jagged rocks and bulbous baobabs. Famously, Cecil John Rhodes scratched his name into the bark of one of these giants which stands like a sentinel on the Mmamagwa rock formation and is now known as the Rhodes Baobab.

Solomon’s Wall, close to confluences of Motloutse River and the Limpopo, is another of the main geographical attractions – a 30m basalt wall jutting through the landscape on both sides of the riverbed. This wall once formed a natural dam that held back a massive lake, as evidenced by the deposits of several kinds of semi-precious stones. 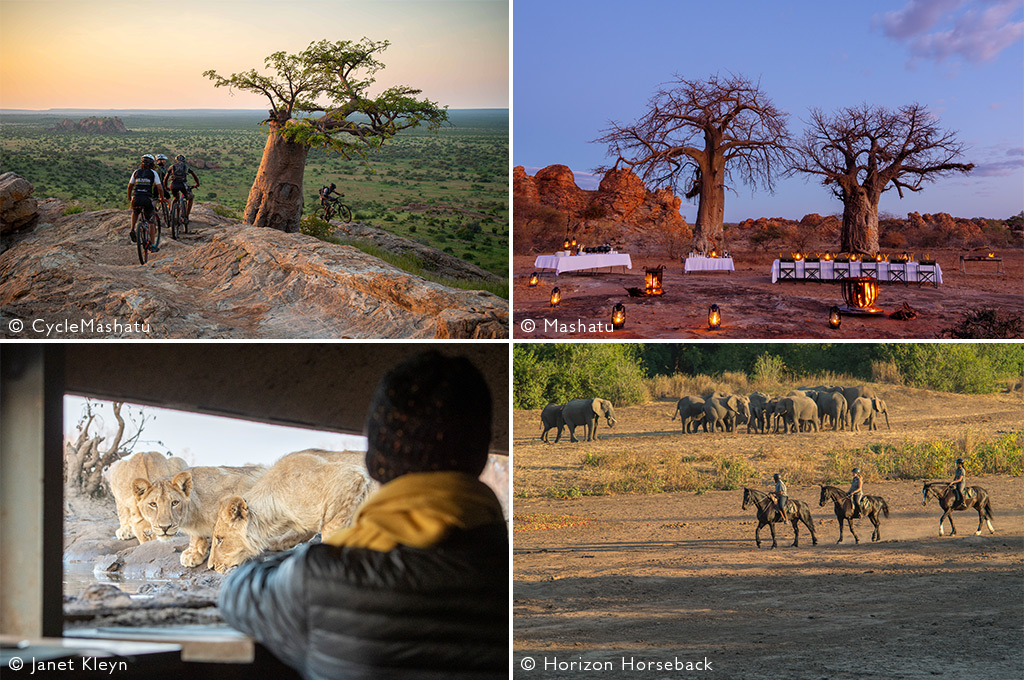 As mentioned, the Northern Tuli Game Reserve consists of an amalgamation of private properties, which means that entry is only through arrangement with one of the multiple lodges. However, the fact that the land is privately owned means that almost anything goes in terms of exploring (provided, of course, that it does not damage the ecosystem). Aside from the traditional game drives led by expert guides, adventurous visitors to Tuli can explore the surrounds on foot or horseback – galloping alongside herds of giraffe or zebra. For the even more physically active, Tuli’s rocky outcrops and networks of dried riverbeds make for exciting and challenging mountain biking opportunities, with the added adrenaline of encountering some of the reserve’s many elephants.

For those looking for a more sedate experience, underground hides present amateur and professional photographers alike with a unique perspective of the reserve’s waterholes. From the quick dips of the birds on a hot day to extreme close-ups of elephants’ muddy toenails, the low-level photographic hides offer something entirely different to the safari experience.

There is a range of different accommodation options to suit most budgets, some intimate and rustic and others geared to more luxurious tastes. 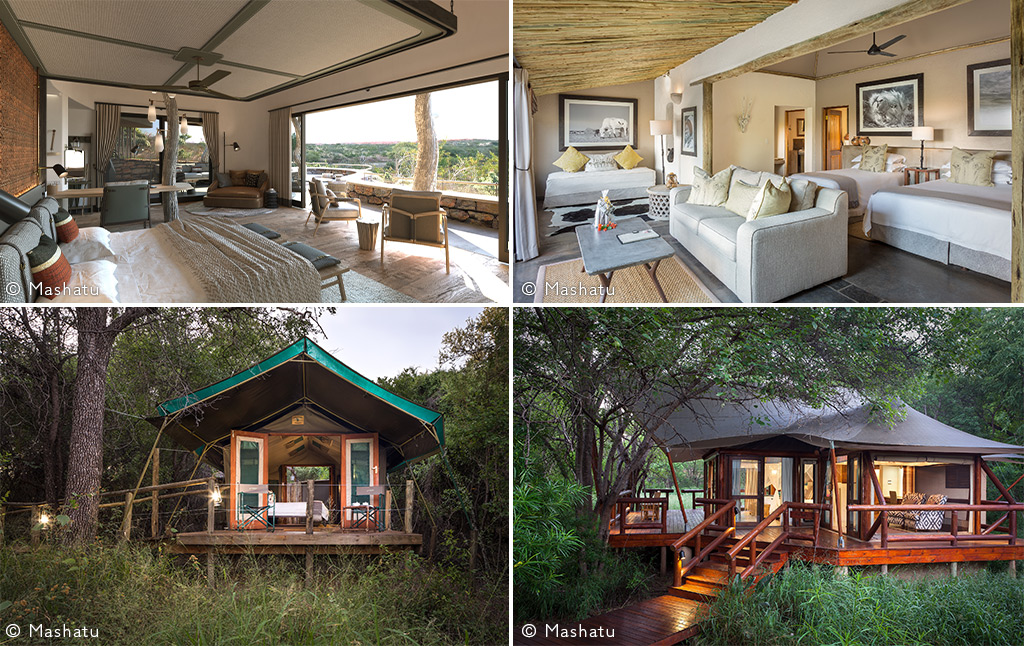 The wildlife viewing in Tuli is spectacular, not just in terms of the variety of animals but because the extraordinary scenery creates the perfect backdrop against which to view them. Elephant viewing is at its best between January and March when large herds of between 100-300 individuals gather. The dry season between April and November offers the best nocturnal viewing of less common species like brown hyenas, honey badgers, African wild cat, aardvark and even aardwolf. This period also offers the best predator viewing because water resources are limited to the deep pools and waterholes.

The reserve is open to surrounding areas and, as a result, the elephant population has sufficient space to thrive and Tuli is said to have some of the highest densities of elephants anywhere in Southern Africa. While the reserve is not home to buffalo or rhino, it supports healthy populations of the three big cat species and deep pools in the rivers are home to pods of hippos and large numbers of crocodiles. Recently introduced painted wolves (African wild dogs) are a rare sighting.

As a transition zone between the Kalahari Desert and Lowveld bushveld, Tuli offers varied and exciting birding opportunities, with over 350 recorded species. The large riverine trees hide Pel’s fishing owls, and the kori bustards (Botswana’s national bird) pick their way through the grasslands while lanner falcons swoop through rocky valleys.

The Land of Giants

The Northern Tuli Game Reserve is often affectionately referred to as the Land of Giants, a name which it lives up to in so many different ways. It is home to the largest antelope species (the eland), and large herds of elephants criss-cross its dusty paths. Ancient baobabs, ecosystems in their own right, dominate the extraordinary vistas and the landscape, with its outcrops of red rocks, resembles a giant’s playground.

Listen closely beyond the silence in Tuli. You may just hear the echoes of the history that played out in a rugged, somewhat inhospitable, but infinitely wild and beautiful land.