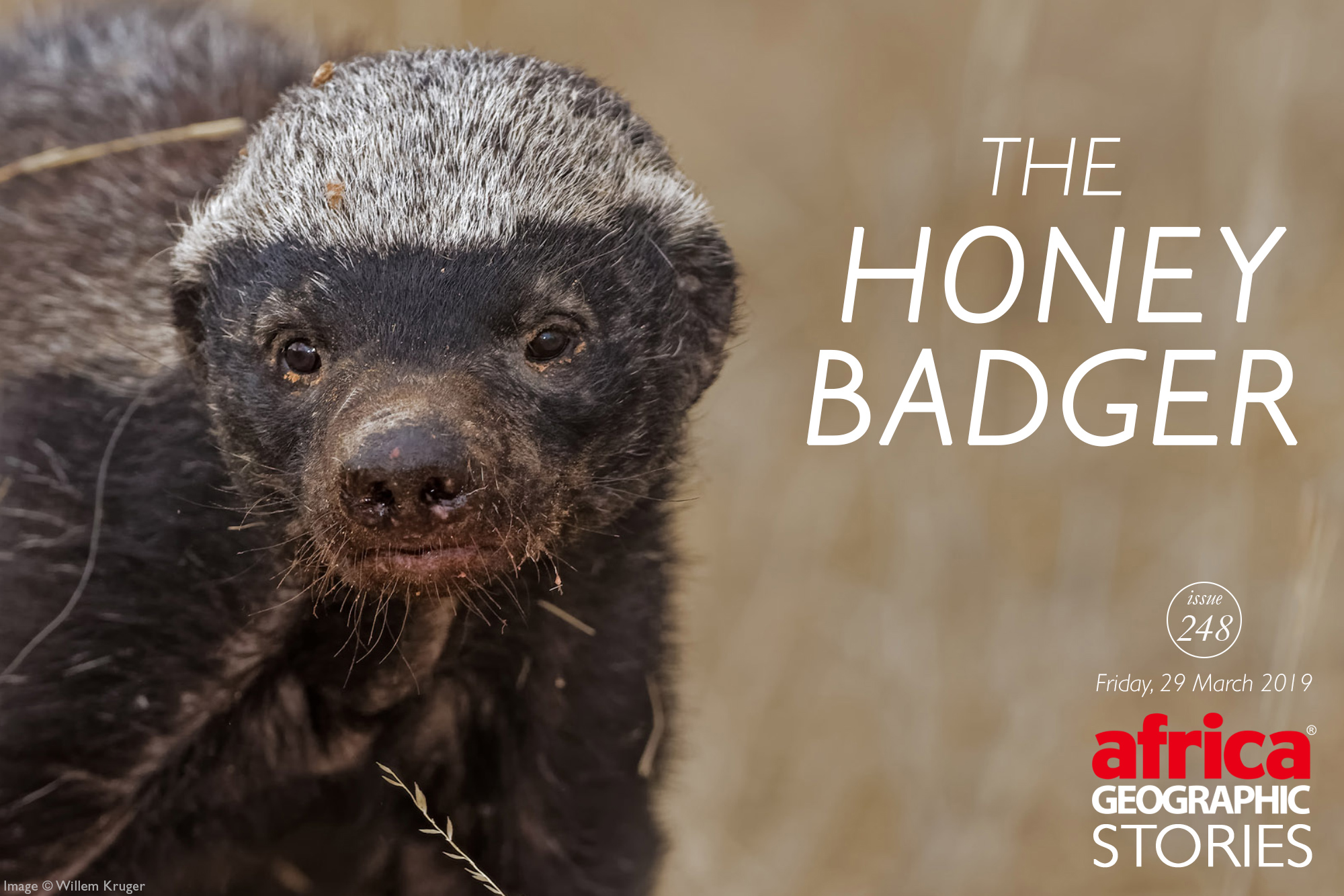 Africa’s most fearless and tenacious carnivore

There is an expression in Afrikaans that goes “so taai soos ‘n ratel” – which translates to “as tough as a honey badger”. Across the continent honey badgers have earned the reputation of being tough, even lending their name to an armoured personnel carrier used by the South African Defence Force. This reputation is in part due to its appearance, that stocky frame and those long powerful claws, but really it is the honey badger’s tenacity that sets it apart from the rest. After all, this is a creature who snacks on honey from the notorious African ‘killer bee’ hives and thinks nothing of eating venomous snakes and even taking on lions.

Simply put, honey badgers are the Chuck Norris’ of the African bushveld.

Honey badgers are easily identified by their striking colouration: jet black with a grey mantle, and a white stripe running from the head down to the base of the tail. The mantle and the stripe may vary in colour and thickness from one individual to the next.

Honey badgers are sexually size-dimorphic, with males at least one-third larger than females. From the shoulder, the honey badger stands at a height of 250 mm high. The males weigh on average 9-16 kg, while females weigh 5-10 kg.

Even though they may be small in stature, honey badgers are built for battle. They have loose-fitting skin, which is 6mm thick around the neck, that protects their vital organs during a brawl and allows them to wriggle out of any grasp and even twist around to bite any assailant silly enough to grab them. They have short, sturdy legs, with five toes on each foot, armed with powerful claws of up to 40mm in length! Their low-slung frame and short legs make them animals of stamina, not speed, and their distinctive jog-trot allows them to relentlessly pursue their prey until it has collapsed with exhaustion.

Read about an interesting encounter between a honey badger and black-backed jackals here: Fantastic sighting: Honey badger versus jackals

The honey badger (Mellivora capensis) is the only species of the genus Mellivora and belongs to the diverse Mustelid family, which includes eight other badger species, otters, weasels and the wolverine. The name badger was given to the honey badger because of its superficial resemblance to the Eurasian badger, but the two species are not closely related, and the honey badger is the only representative species of a separate subfamily.

As many as 12 honey badger subspecies have been suggested, but intraspecific taxonomy has not yet been sufficiently studied, and no DNA investigation of subspecies has been completed. The suggestion of subspecies based on pelage (fur) colour and pattern is dubious at best as the honey badger’s colour – particularly the grey mantle and white stripe pattern – is highly variable and changes with age.

The honey badger is widely distributed and can be found in a variety of habitats – from dense rain forests and arid deserts to sea level and afro-alpine steppes in the Bale Mountains of Ethiopia. They are found across sub-Saharan Africa from the Western Cape in South Africa through to southern Morocco and south-western Algeria, and across to the Middle East and India. 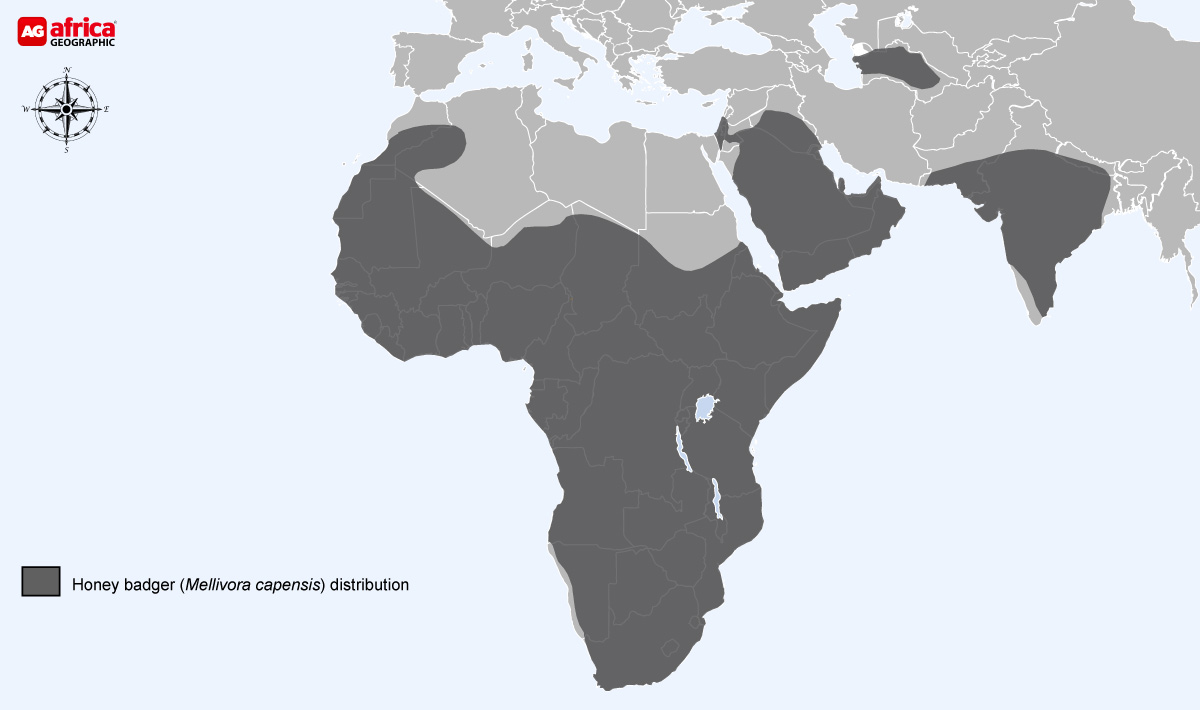 While known as being affectionate, protective and involved mothers, honey badgers eke out most of their existence alone. As solitary carnivores, males and females only meet up to mate before again going their separate ways. The males play no part in rearing the young.

They do not have a fixed den, but rather move about their home ranges, usually sleeping in a different self-dug hole every night – though they have also been known to use old aardvark and warthog burrows on occasion. Honey badgers are intelligent creatures who have even been spotted using tools. They are also expert diggers, and it takes them roughly 10 minutes to excavate a burrow in hard ground.

The honey badger is very adaptable; for example, it is naturally diurnal during winter, but if there are humans around, it will adopt nocturnal habits.

In southern Africa, honey badgers do not have a fixed breeding season and kits are born year-round. Honey badgers usually only have one or two kits at a time after a six-month gestation period. Kits are born blind and will stay with their mother for roughly 14 months before going off on their own.

During this long period of dependency, kits need to learn the skills of hunting, climbing and digging from their mother, as these do involve a certain degree of coordination and technique that takes some time to learn.

Despite their ferocious reputation honey badgers are seldom unnecessarily violent. They will defend themselves if attacked, even against buffaloes or lions. When defending itself, the honey badger can produce a booming ‘rattling-roar’ and will rush towards its attacker, rather than away from them. There is a reason why the Guinness Book of Records lists the honey badger as the ‘most fearless animal in the world’…

Honey badgers have an acute sense of smell which helps them to locate their prey, which they catch mainly through digging. While they feed on a wide variety of foods including birds, small mammals, insect larvae, scorpions, lizards, rodents and eggs, their most impressive kill has to be highly venomous snakes such as cobras, puffadders and black mambas. Honey badgers have been known to sleep off the effects of a snake bite, although it is not known whether this would happen if it is bitten by a highly venomous snake species.

Although ground-dwelling, honey badgers are also accomplished climbers and can scamper up a tree to raid bird nests or beehives. Honey badgers have immensely strong jaws, and in sparse regions such as the Karoo they provide for themselves by cracking open tortoise shells and feasting on the meat inside.

There is anecdotal evidence that the honeyguide bird species guide the honey badger to wild beehives by calling and leading the way, so that the honey badger can break open the hive to feast on the honey and bee brood (the eggs, larvae and pupae of honeybees). This symbiotic relationship has been witnessed frequently in the wild, although no scientific study has been conducted to confirm or explain the behaviour.

In what is now often shared folklore, Kruger Park Ranger Stevenson-Hamilton suggested in 1947 that the honey badger would attack the testicles of larger animals, such as buffaloes and wildebeests, letting the animal bleed to death before claiming their prey. It should be noted though that this behaviour has not been reported after Stevenson-Hamilton’s claims.

As tough as they are, honey badgers do have to be on the lookout for natural predators such as lions, leopards, pythons and hyenas. But their greatest adversaries are humans.

Many badgers suffer gruesome fates when they encounter humans, whether it’s being poisoned, gin-trapped or shot by beekeepers, hacked up for traditional medicine or being snared in traps set for black-backed jackal and caracal. Badger-friendly honey has become commonplace in many shops in South Africa, in an attempt to provide a financial incentive to honey farmers to conserve honey badgers – the solutions often being as simple as placing beehives high up, out of the reach of foraging honey badgers.

Another obstacle to the conservation of this unique species is the sheer size of their home range, with males occupying roughly 638 km², and females 138 km². This would mean that the majority of protected reserves are too small to serve as a safe haven for a viable population of honey badgers.

The honey badger is currently listed as ‘Least Concern’ by IUCN, but their population is decreasing. Honey badgers tend to live in low densities, which makes assessing the population harder. Their status has risen to ‘Near Threatened’ in Southern Africa in the past, as well as in Morocco, and they are considered ‘Endangered’ in Niger. In Israel, honey badgers are a protected species.

“While on safari in Linyanti, Botswana a few years ago, I met an Australian couple who were keen to see a honey badger. They had seen lions, leopards, elephants and so many other awesome species, but hilarious YouTube memes about this fantastic survivor had created a strong desire to see one. They spoke of little else during the two days that we shared a game drive vehicle. Alas, they saw no honey badgers during that safari, but in a twist of fate, we saw one on the drive back from the airstrip after having dropped them off for their journey home! Hopefully, they have since had better luck.

“The honey badger is the stuff of myth and legends, one of the true characters of the African bushveld, and a reminder to us all that life is what you make of it, and that it takes character and true grit to beat the odds.” ~ Simon Espley, Africa Geographic CEO

ABOUT THE AUTHOR, Noelle Oosthuizen

Growing up watching Beverly and Derek Joubert’s documentaries and idolising Jane Goodall, Noelle has always dreamed of living in the bush. For now, she writes about her bush adventures from her home in Cape Town, South Africa. She has a particular soft spot for chacma baboons, and she advocates for these charming primates every chance she gets. By far her favourite adventure has been being a foster mom to an orphan baby baboon.