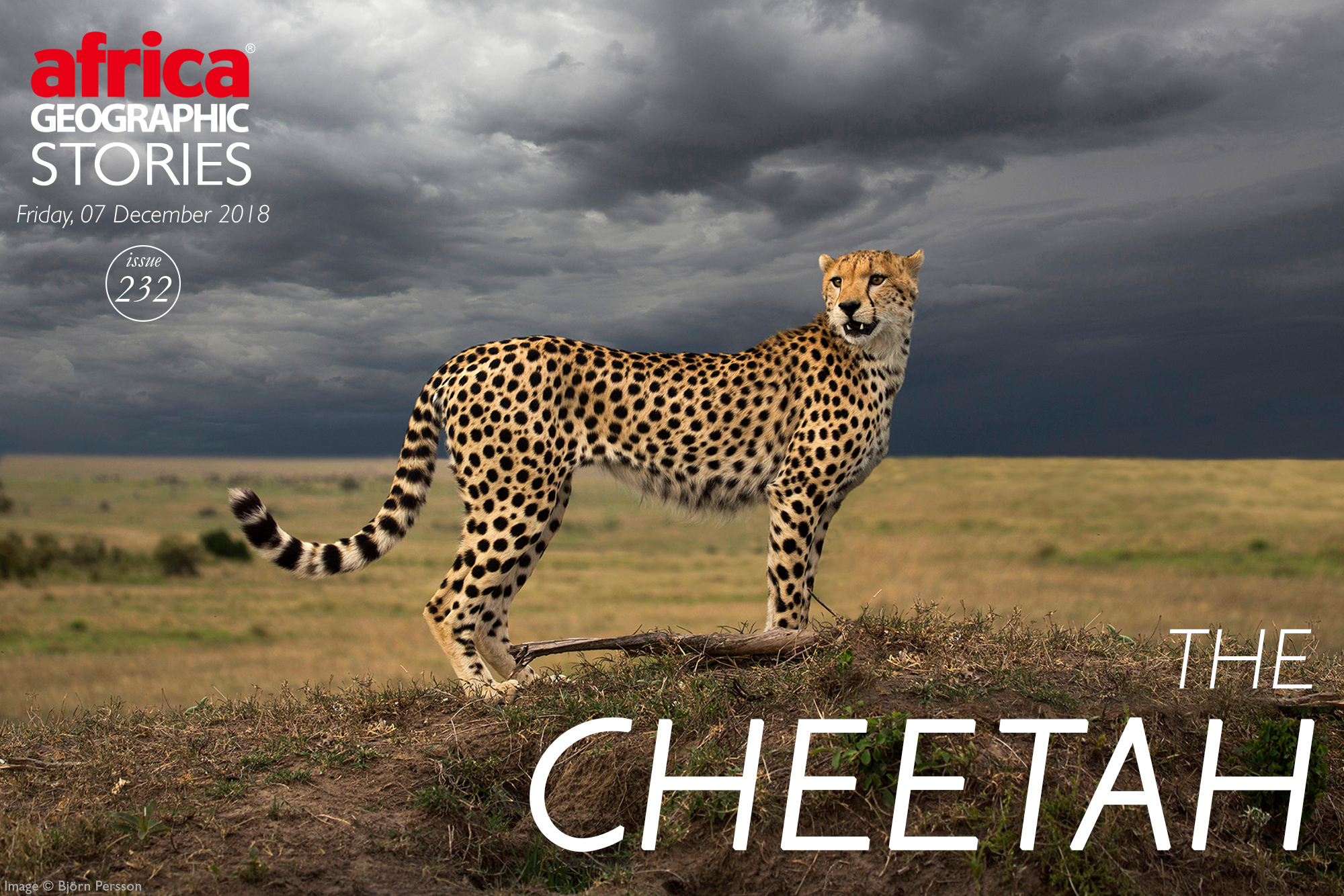 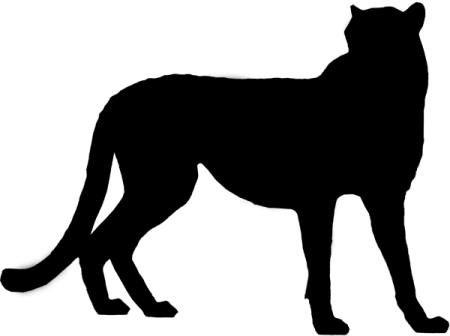 “A cheetah in full flight is one of Africa’s most breathtaking sights – that blindingly rapid and yet sublimely smooth acceleration and the ability to swerve at full speed take one’s breath away. And, with a hunting success rate above 50%, cheetahs are amongst the most successful of Africa’s large carnivores when it comes to hunting efficiency, second only to painted wolves.

And yet, the evolutionary sacrifices that cheetahs have made in their quest for speed and agility have placed them at a disadvantage when it comes to defending themselves and their food against other predators. Lions, leopards and hyenas frequently rob cheetahs of their hard-earned meals, and even kill adult and baby cheetahs, in the ongoing brutal battles amongst predators over resources. Game reserves and national parks with high populations of large predators tend to harbour small cheetah populations, and most cheetahs are often found in the vast lands beyond protected areas. Trying to avoid conflict with stronger predators, cheetahs move to unprotected areas. However, there they come into conflict with pastoralists, who see cheetahs as potential livestock killers, which leads to retaliatory killing of cheetahs.

Cheetahs have another reason to fear humans. Their relatively timid nature and lack of brute strength and sharp hooked claws make cheetahs popular pets for humans. Even though no wild animal species should be tamed and made into household pets or items in personal zoo collections, there is a substantial trade in wild-caught and captive-bred cheetahs. And the recent upsurge in South Africa of tourism’ predator encounters’ and cub petting facilities has increased the demand for cheetahs, which have a longer usage shelf-life in this regard than do lions.”

The following notes were based on information from IUCN Red List, supplemented by Dr Elena Chelysheva from the Mara-Meru Cheetah Project.

Cheetahs are the fastest land mammals, with documented speeds up to 115 km/hour in captivity and 93 km/hour in the wild, but they cannot maintain such speeds for more than a few hundred metres. By comparison, sprinter Usain Bolt hits a top speed of 45 km/hour over a maximum of 100 metres.
They are found in a wide range of habitats, from dry forest and thick scrub to savannah grassland and arid deserts.

Cheetahs take a wide variety of prey, predominantly small or medium antelope species such as Thomson’s gazelle and impala, but also larger species such as wildebeest and kudu. They also target ground-dwelling birds such as francolins and bustards and small mammals such as hares. Unlike many predators, cheetahs rarely scavenge.

Cheetahs adapt to various environmental conditions and display different behaviours depending on the area and country. For example, in South Africa in areas with high large carnivore densities, cheetahs can lose up to around 10% of their kills to lions and spotted hyenas. In these areas, they are primarily active during the day and during full moon periods when there is excellent visibility, and tend to abandon their kills once they have eaten their fill – both habits are thought to reduce conflict with lions and hyenas.

In contrast, in areas where there are fewer other predators, they have been recorded as being primarily nocturnal, although this may be to avoid the increased human activity in those areas. In Kenya’s Maasai Mara, cheetahs change their diurnal activity and become nocturnal, depending on current needs and circumstances, and some of them become successful hunters in total darkness!

SOCIAL STRUCTURE AND TERRITORIES
Female cheetahs tend to be solitary (when not with dependent young), whereas males tend to form coalitions of two or four (often littermates) – a social organisation that is unique amongst cats. Sometimes brothers accept unrelated males and such unions last from a few weeks to several years. In the Maasai Mara, a male coalition named the Fast Five has become famous because it was formed from unrelated males, who travel, hunt and rest together, but split for mating so that each member gets the chance to breed.

Although females display preference to specific partners, adaptive mechanism leads them to mate with as many males as possible to increase genetic diversity.

In areas where prey is not migratory (such as Namibian farms), cheetahs establish large home ranges (up to 3,000 sq. km!)  with extensively utilised core areas, with male and female ranges overlapping to an extent. It is thought that the large home ranges are to avoid clashing with other large predators such as lions, leopards and hyenas.

In areas where prey is migratory (such as the Serengeti/Maasai Mara ecosystem), some cheetahs follow the herds. In contrast, others establish territories (60 – 150 sq. km) or become nomadic, covering vast territories within the Mara-Serengeti ecosystem.

Wild female cheetahs live to about 14 years and males to 10 years. Females have been recorded as starting to breed at two-years-old and to continue beyond 12-years-old. The cubs are born after a three-month gestation period and kept hidden away in a lair for the first two months of their lives. During this time, the mother will be out hunting and therefore absent from the lair during daylight hours.

Cub mortality can be high – up to 95% reported in the Serengeti, 76 – 74% in the Mara and 64% in the Kgalagadi Transfrontier Park. Lions, spotted hyenas and leopards are key predators of cheetah cubs, in addition to smaller predators such as honey badgers, jackals and secretary birds. In the Mara, depending on the year, only 7 to 15% of cubs reach the age of independence.

Surviving cubs remain with their mother for 12 – 22 months, after which they will roam with their littermates for a few weeks or up to six months. At this time, females split from their siblings, while surviving males will stay together for life or join up with unrelated males to form a coalition.

The cheetah (Acinonyx jubatus) has 5 subspecies, as follows:

The cheetah (Acinonyx jubatus) has been described as a species with low levels of genetic variation as a consequence of a demographic bottleneck 10,000 – 12,000 years ago, which led to small genetic differences between the subspecies. However, an examination of mitochondrial DNA and microsatellites in cheetah samples from most of the historical range of the species undertaken in 2011, revealed the distinctiveness of Northeast African cheetahs (A. j. soemmeringii) from Southern African (A. j. jubatus) and Asiatic cheetahs (A.j.venaticus).

The English name ‘cheetah’ is derived from Sanskrit’ citra’, meaning spotted or speckled.

The scientific name Acinonyx jubatus derives from Latin and Greek with the genus name referring to its semi-retractable claws and the species name – to the mantle which covers the cub’s body for a few months of age.

At the beginning of the 20th Century, over 100,000 cheetahs roamed Africa and Asia, but by the end of that century, the wild cheetah population had reduced to 15,000. Currently, the total population is estimated at 7,100 adult and adolescent animals of known cheetah populations, with 4,297 living in Southern Africa, 2,290 in Eastern Africa and 457 in Western, Central, and Northern Africa. In Africa, cheetahs are resident only on 13% of their historical range, and in Asia on just 2% of a historical range – entirely within Iran, where less than 50 animals recorded.

The cheetah is classified as ‘Vulnerable’ in terms of the IUCN Red List, while the two subspecies A. j. venaticus (Asiatic cheetah) and A. j. heckii (Northwest African cheetah) are listed as ‘Critically endangered’. 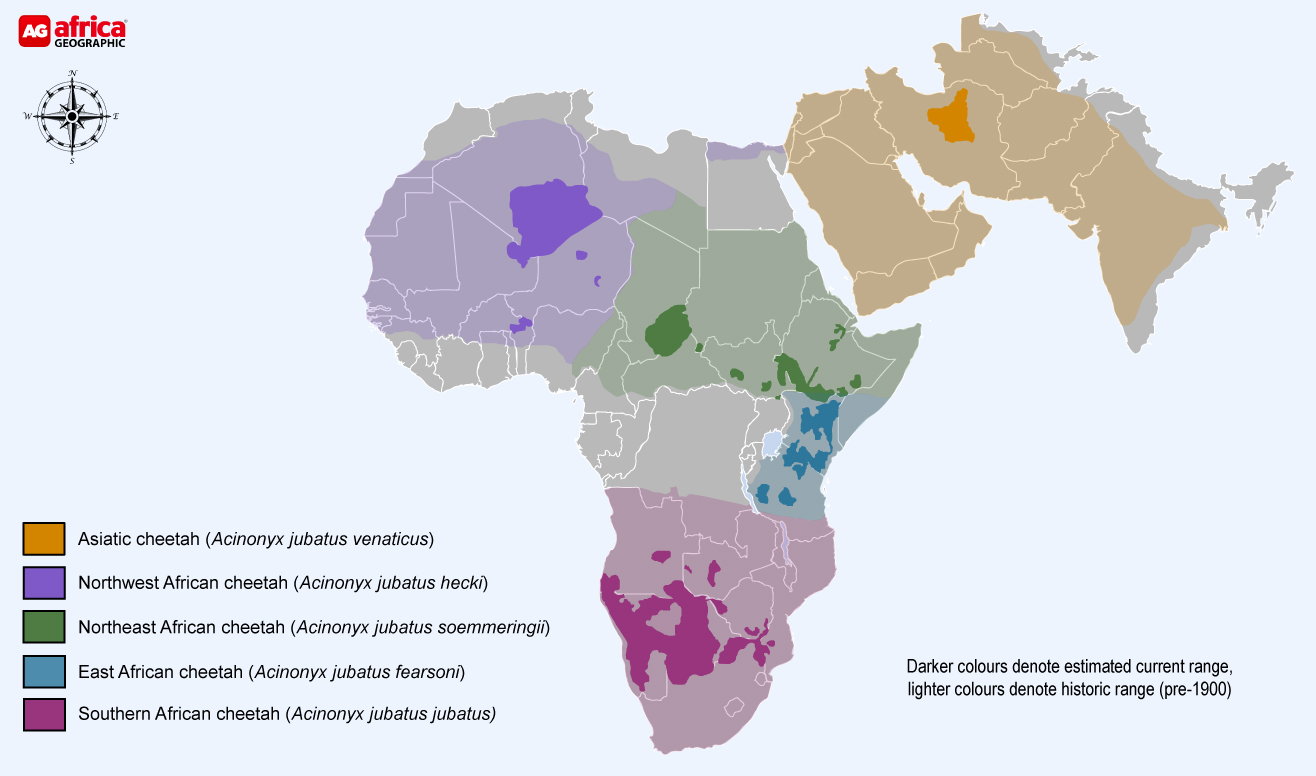 Because cheetahs require such large ranges, they are especially vulnerable to habitat loss and fragmentation.

Those living outside protected areas are often threatened by conflict with livestock and game farmers. Although they do prefer wild prey over livestock, they have been known to kill domestic livestock species, and so face retaliatory persecution by farmers. Game farmers may also target cheetahs due to a perceived threat to their farmed game species.

Because cheetahs rarely scavenge, they are less susceptible to poisoning than are other carnivores such as hyenas, leopards and lions. Cheetah do though get caught in snares set for bushmeat, even though they may not be the primary target.

Cheetahs can survive in low prey-density areas because they are such efficient hunters. Still, they are nevertheless vulnerable to the reduction in prey species due to hunting, high livestock densities and grazing pressure, and habitat conversion. Low prey densities, in turn, cause cheetahs to target domestic livestock.
High-speed roads also represent a threat to cheetahs, especially where tarred roads cross or adjoin major wildlife areas.

Unregulated tourism can threaten cheetah populations, where large numbers of tourist vehicles or insensitive tourist behaviour can lead to interference with cheetahs hunting, scaring cheetah away from kills, and separation of mothers from cubs.

Cheetahs are hunted in some areas for their skins, and also for cultural uses. Additionally, there is a substantial illegal trade in wild-caught cheetah cubs and adults to the Gulf states.

USE AND TRADE
CITES permits a legal quota for “live specimens and trophy hunting” of cheetahs in Namibia, Zimbabwe and Botswana, with most resultant trade primarily being of hunting trophies from Namibia and captive-bred animals from South Africa. There is a strong suspicion that some of the animals traded from South Africa as captive-bred are in fact wild-caught. Observers have reported illegal international movement of live-captured wild cheetahs between Botswana, Namibia and South Africa.

The illegal trade in cheetah skins for traditional use and live wild-caught cheetah cubs is an ongoing issue, with the primary market for the live cubs being the Gulf States. The cubs are sourced in Ethiopia and Kenya, via Somali-controlled trading operations. There is a high mortality rate (estimated 70%) amongst wild-caught cubs, and captive conditions in the Gulf States are often not satisfactory, with inappropriate diet leading to illness and early death.

Historically a key cause of the demise of the Asiatic cheetah populations was from illegal capture and trade and the hunting for their skins. Currently, illegal trade in live cheetahs remains a problem issue.

Of all species, surely the cheetah most represents Africa’s vast open spaces, where no fences stifle the seasonal movement of species between ecosystems and the free flow of dispersing individuals seeking breeding opportunities and escaping persecution. For cheetahs do not fare do well in fenced reserves, where they have to compete with larger, more powerful predators. If we can succeed in keeping cheetahs roaming wild and free, then we will by implication also achieve great things for African wildlife conservation.