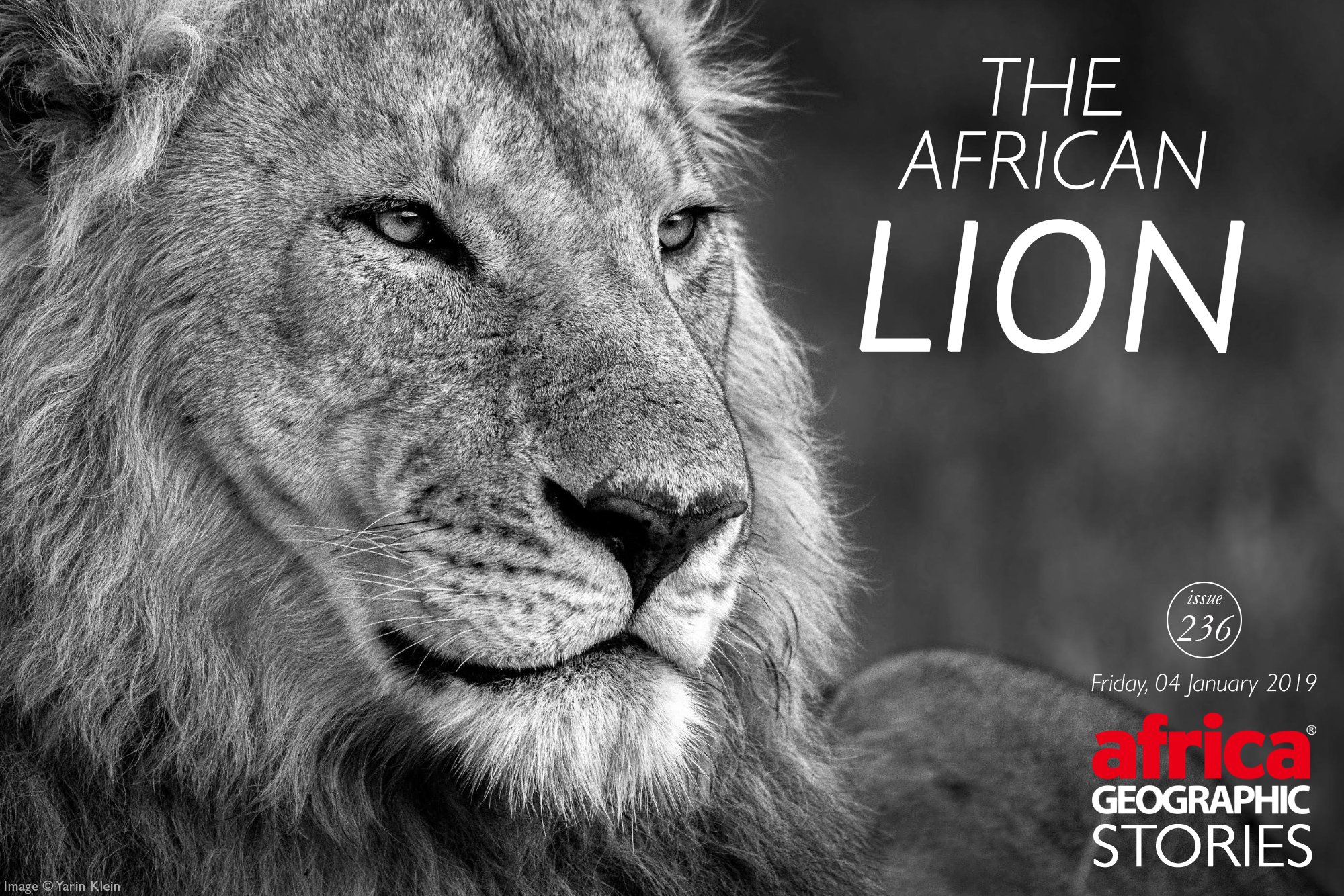 We unpack the facts about the African lion 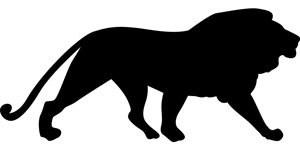 “There are few sounds as evocative and exhilarating as a lion roaring his challenge into the African night; triggering in us all a primordial reaction of fear and awe. Lions are essential players in Africa’s wild spaces, ruthlessly executing the role of an apex predator and so helping maintain biodiversity and ecosystems, which change fundamentally when lions are removed from them.

“Unfortunately, lions compete with livestock farmers for access to land and resources and suffer fatal consequences. They also have to make do with reducing suitable habitat and with less available natural prey, as man increases his footprint. And, to top it all off, trophy hunters surgically remove the remaining large male lions from vast unfenced areas and as they migrate (or are lured) out of conservation areas.

“And, the commercial exploitation and commoditisation of lions continue unabated, with a small band of ruthless and opportunistic South Africans, reducing them to factory farm products. Increasing numbers of tiny cubs born in captivity are taken from their mothers after a few days – to be petted by gullible tourists, later to accompany the same ilk of tourist on lion walks, before being shot in small enclosures by a new kind of trophy hunter – the kind that seeks instant peer status at a discounted price. The lions not hunted are mostly slaughtered and the bones sold into the insatiable Far East market, often in the guise of tiger bones. Industry spokespersons justify this evil industry as ‘sustainable utilisation’.

“To add to the confusing din surrounding lions is the clarion call of increasing numbers of self-appointed lion’ protectors’, many of whom post pictures online of them hugging their ‘special lion friends’. And luxury brands flock to these Instagram icons, paying big cash for the association, and so the big cat bandwagon rolls inexorably onwards. ‘Do as I say and not as I do’, seems to be the message, as these ego-driven opportunists spit venom at the many other predator-petting facilities that have mushroomed all over South Africa.

“There are fame and a decent living to be made by hugging big cats, it seems. All of these opportunists (from petting parks to celebrity lion-huggers) claim to be doing so for lion conservation purposes. Yet, most contribute very little, if anything, to wild lion conservation. In fact, quite the opposite. Aside from creating confusion for tourists, these activities suck up donations and gate revenue that would otherwise go to genuine conservation projects.

“It is in this confusing and toxic space that lions battle for recognition and protection. With African lion populations having plummeted by 60% in 20 years, and only some fenced populations holding their own, it is important to understand the available facts about lions, to navigate the confusing online chatter better.”

The following information was extracted from the IUCN Red List, the US government’s Fish and Wildlife Service (USFW), and Africa Geographic, with additional information provided by lion researcher Ljubica Butkovic

The lion can be found in a variety of habitats, from the quintessential grassy savannahs of Serengeti to the deciduous woodland of Hwange and the harsh sand desert of western Namibia. They have even been found occurring at altitudes exceeding 4,000 m in the Bale Mountains of Ethiopia and on Mount Kilimanjaro. In fact, the only habitat types they do not frequent are tropical rainforest and the interior of the Sahara Desert.

Lions will drink regularly when water is available, but in water-scarce areas, they obtain their moisture from their prey and even from plants (such as the tsama melon in the Kalahari Desert). Their prey is usually made up of medium to large species such as zebra, wildebeest, buffalo, giraffe and even rhino, hippopotamus and young elephants. They are opportunistic and will also take smaller prey such as impala, rodents and other predators. Lions frequently scavenge, displacing hyenas, wild dogs, leopards and cheetahs from their kills.

Lions breed freely when given a chance, although cubs (especially males) have an extremely high mortality rate – dying due to predation by other predators (including rival male lions), starvation, dehydration and disease. Even buffaloes will kill lions and their cubs if given a chance. Read more about lion infanticide here

Lions are the most social of the cats, occurring in average prides of up to six adults plus cubs of various ages. Related females form the pride nucleus, with related and unrelated males forming coalitions to compete for and hold tenure over prides.
Lion densities vary from 1.5 adults/100 km² in arid regions of southern Africa, to 55/100 km² in parts of the Serengeti. Pride ranges can vary widely, even in the same region, for example from 266-4,532 km² in the Kgalagadi Transfrontier Park.

The African Lion Working Group is preparing a taxonomic paper which will add to our understanding of the above classification.

The major threats to wild lion populations are indiscriminate killings during human-wildlife conflict (particularly in livestock areas), prey base depletion (due to the commercial bushmeat industry), and loss of suitable habitat (which leads to small isolated populations). Also, trophy hunting has at times contributed to population declines in Botswana, Namibia, Tanzania, Zimbabwe, Cameroon and Zambia, due to unsustainable offtakes and poor regulation.
Another threat is the use of lion bones and body parts for traditional medicine in Africa. Also, although captive-bred lions primarily supply the increasing trade in lion bones to Asia from South Africa, there is substantial concern that wild lion parts from eastern and Southern Africa are now being laundered via these channels.

Lions are listed as ‘Vulnerable’ on the IUCN Red List (meaning that they are vulnerable to extinction in the near future), but of great concern is that the vast majority of the population is inferred to have declined at a rate that meets the criteria for ‘Endangered’ (high risk of extinction in the wild).
1. Historical lion ranges included most African countries and from Greece through eastern Europe, the Middle East and India.
2. The lion has since been extirpated from all of Europe, the Middle East and North Africa and now occurs only in the Gir Forests of India and in some countries of sub-Saharan Africa.
3. In Africa, lions now occur in 8% of their historical range and are restricted mainly to protected areas and surrounding conservancies. 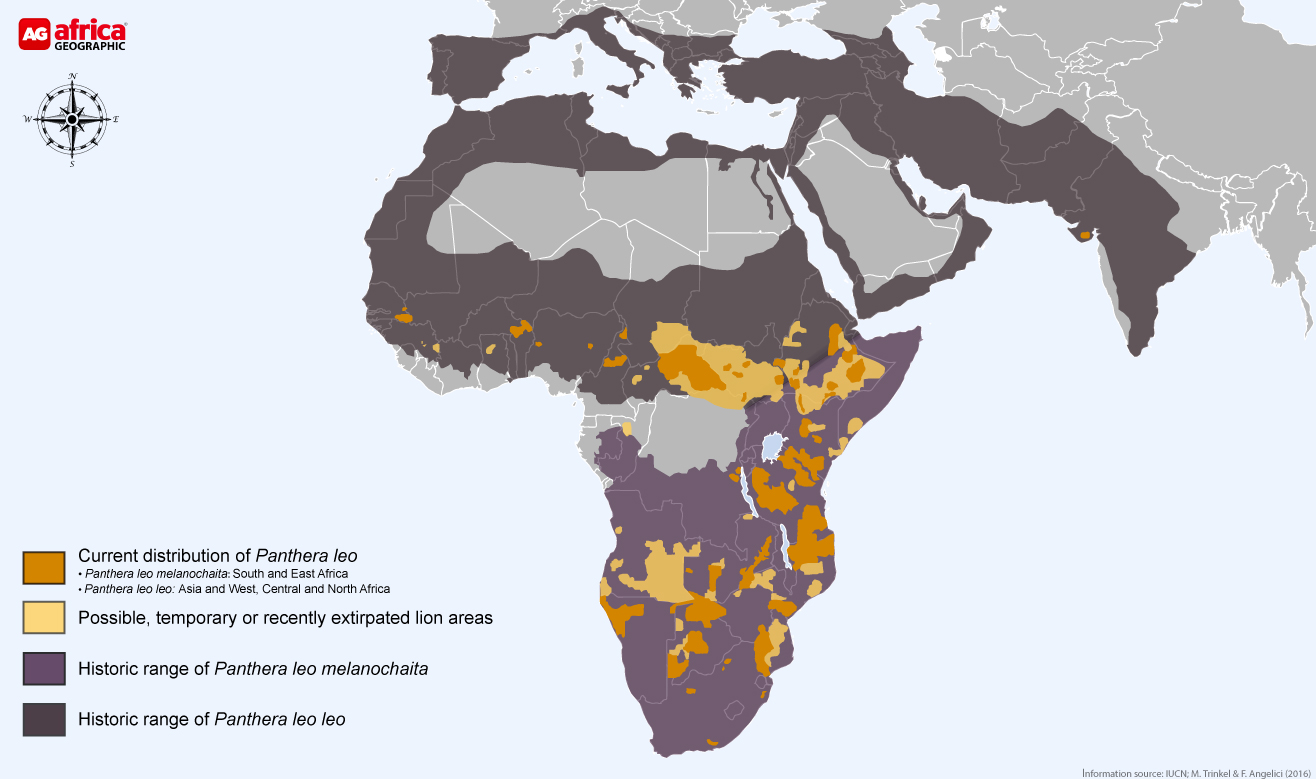 Lion researcher Ljubica Butkovic had this to say, when asked what more needs to be done: “The future of wild lions lies in the hands of local communities that live amongst the wildlife.

“Lion numbers continue to decline, despite millions of dollars being pumped into ongoing research projects. This research is vital, but what is needed more at the moment is educating local communities on the importance of wildlife and how to cope with their presence to increase human tolerance towards lions. This would result in the overall enhancement of livelihoods. The fate of these animals rests in the hands of people who live around national parks, reserves and conservancies. Many studies have been conducted through interviews that focus on human interactions with wildlife, and these studies need to be used to find practical and effective solutions for human-lion conflict, particularly concerning livestock protection.

“A wide range of NGOs primarily focus on raising awareness and educating younger generations. This technique teaches and trains individuals in literacy and scientific monitoring, who then engage communities in wildlife conservation and reinforce the link between humans and carnivore presence. It is believed, however, that without the proper education of older generations and improvement of livelihoods the attitudes of the locals towards wildlife is unlikely to improve.

“Also, the employment of local people as park rangers, tour guides and lodge/hotel staff makes a big difference to their attitudes towards lions, and these forms of employment should be encouraged. Local schools in Kenya are proactive in arranging trips for students to these parks, going a long way in educating young generations of the importance of African wildlife.

“So many of these vital efforts are, however, not recognised or supported by donor cash, because the results are difficult to measure and so are not always very visible.”

Lions are vital components to naturally-functioning African ecosystems and key drivers of the sustainable photographic tourism industry. They are also iconic beacons to our own sense of place as Africans. Their disappearance in the wild would be catastrophic, and we all should get stuck in to help. There are enough wild lions left, and there exists enough goodwill amongst Africa’s people and conservation entities, to reverse the current slide into extinction and repopulate areas now denuded of wild lions.

What can you do to help with wild lion conservation

1. Support by way of donations scientifically-based, transparent, successful conservation programs that focus on wild lions and support African people that have to suffer the consequences of living amongst wild animals; Here are some suggestions, but please do your own research before deciding:

2. Actively discourage the cynical and morally-bankrupt lion petting and walking industries by refusing to visit them or financially support them, and educating your friends and family accordingly;
3. Place social media and other lobby pressure on government entities to be transparent and accountable regarding all forms of ‘sustainable utilisation’ – including the trophy hunting of lions (‘canned’ and wild).