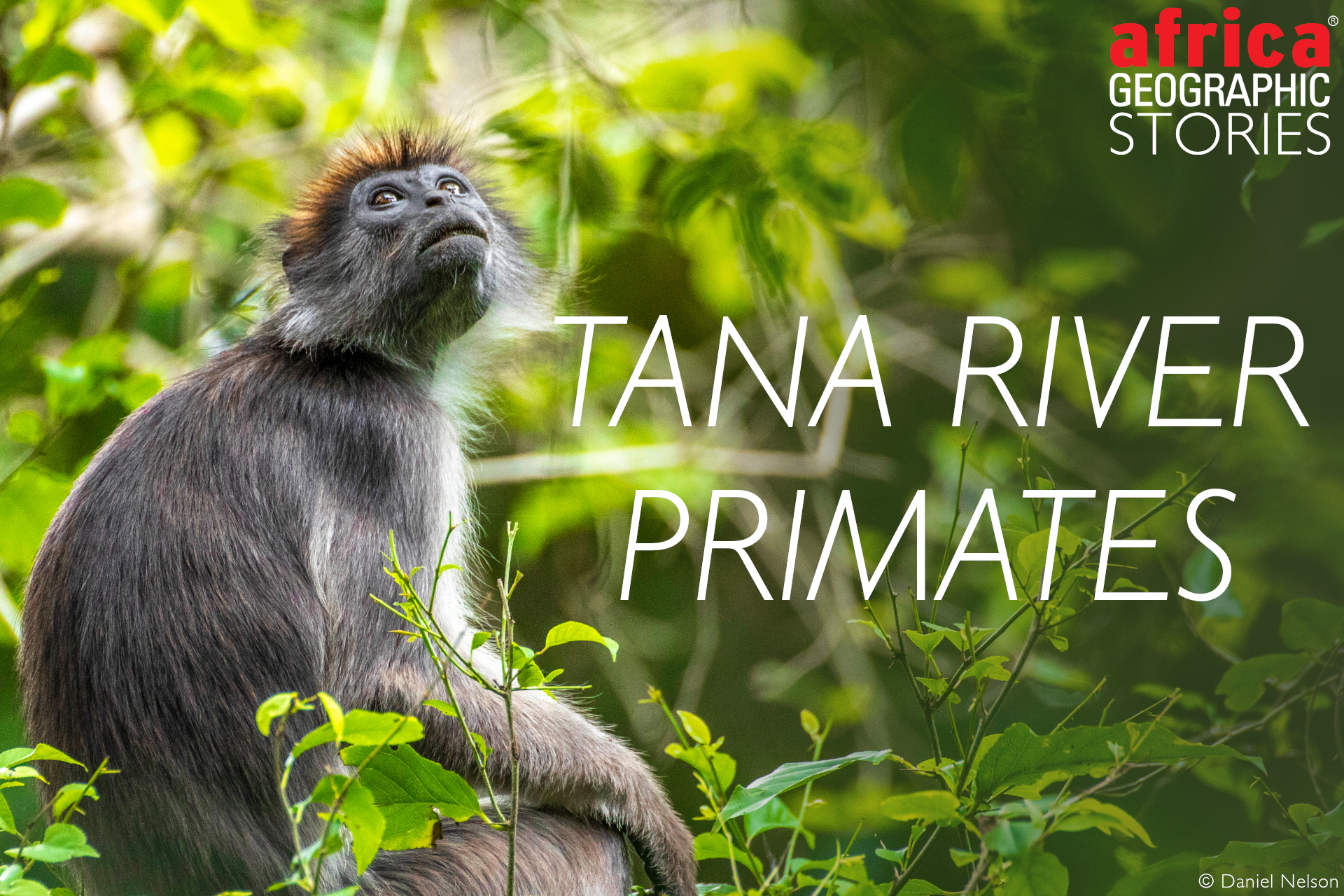 on a broken wildlife highway

If God were to grab a wilderness reserve, pull it on both ends, and stretch it into a thin line – it would be the forest of Tana River. This riverine forest winds deep into the drylands of east Kenya, near the border of Somalia. You can walk across it in ten minutes – that is how narrow this forest is. Yet, it is over three hundred kilometres long. Scrunched into this linear forest are elephants, hyenas, bushbucks, waterbucks, kudus, lions, giraffes, and more. I have never seen such a uniquely laid-out piece of nature.

I am a young photojournalist and I had a specific goal for this project. I wanted to create a high-quality photo story of the Tana River’s two critically endangered primate species – the Tana River red colobus and the Tana River mangabey. Both are endemic to the forests on the banks of the Tana River. The colobuses are folivorous (feeding on leaves), consuming up to three kilograms of leaves per day, in small groups high up the forest canopy. The mangabeys are semi-terrestrial monkeys, rummaging across the forest floor in large troops for seeds, fruits, and insects. Both primates are dependent on this narrow band of forest which is a remnant of a continuous forest that stretched from Central to East Africa 25,000–30,000 years ago. They remained under-photographed for so long because their home range was inaccessible for many years due to Al-Shabaab related insecurities in the region. Luckily, that has changed.

My camp is dappled in afternoon sunlight. Two bungalows, two containers, and an outdoor kitchen – simple, but comfortable. Two researchers welcome me with open arms. They are glad to finally have a visitor. Above us are scores of trees including beautiful doum palms and a massive sycamore fig. Both honeypots for primates. At night, the local wildlife moves along the riverbanks. To them, this band of forest is a highway. A highway with no exits, given that there are parched drylands on both sides. For safety reasons, I am not allowed to leave camp after dark – I hear the sniffles and stumbles of elephants and hyenas crossing through forest camp at night.

I spot both my primates on day one. The colobuses are curious about me, but stay high in the tree canopy. The mangabeys are bolder, and march past me like I do not exist. I successfully photograph both species – a personal milestone. With the pressure gone, my guide takes me downstream. He has something to show me. I am expecting more beauty, more of this green forest highway. But alas, my guide, a local man called Said Rova, takes me to a series of farmlands. It appears that the line of forest below our camp breaks into fields – barren and sunbaked. The forest highway is thus interrupted. ‘Such clearings occur everywhere along the river’, Said confesses. I ask how this came to be.

He explains, ‘The Pokomo people use these riverbank forests for agriculture. The human population is growing fast, and in the past twenty years some 50% of forests have been razed’. Imagine a dusty plain, endlessly vast, and curving through it, a band of greenery. Moving up and down this line are animals. But then humans come and clear parts of that line for agriculture. The continuous band of forest now becomes a dashed line, broken and patchy. The monkeys cannot cross these barren gaps, they are marooned on the loose cuts of greenery – unable to migrate, unable to reproduce. That is why the primates are critically endangered.

Surely these forests are protected? During the course of the following days, Said takes me to the Tana River National Primate Reserve and the Ndera Community Conservancy. These are two stretches of the forest set aside for protection. We boat down the river, slaloming through an obstacle course of hippos and crocodiles. I spot storks, rollers, and pelicans on the shores. We also pass riverside villages and farms. At the conservancies, I discover how this protected land is heavily underfunded. Just a dozen rangers are tasked to protect over 100km² of wilderness. The locals in the area seem not to condone their efforts.

‘The Pokomo people are in a human-wildlife conflict with the primates’, he tells me. ‘If we only protect the monkeys, the villagers are ousted into the drylands. If we prioritize human development, then forests get razed. This is a delicate dance.’

I ask whether people and wildlife could live harmoniously? ‘Yes they can’, Said believes. But sustainable agriculture and good infrastructure need to be implemented. But who will fund this? If you half-raze the forest and protect the other half, you get half the profit and half the food. Try explaining that to villagers living on under a dollar a day. They need compensation to comply.

One local activist has found a solution. His name is Omar Bahatisha Dhadho and I meet him in a village on our way back from the conservancies. A kind, smiling man, Omar had arranged that the small amounts of aid money destined for conservation would skip the wildlife and go directly into the community for irrigation, housing, fencing. This seemed illogical to me. But in return for this human-first approach, the community promises to leave the forests and its animals alone, dousing the human-wildlife conflict. So far, this strategy has worked, but it could be better.

‘Tourism would be a true lifesaver’, Said exclaims. Imagine visitors at the Mchelelo Camp (where I stayed) sitting in an armchair, seeing all kinds of wildlife pass through the camp. Elephants, buffalo, hyenas, and more; plus of course, two rare primate species not found anywhere else in the world. Who would not come to this wonderful oasis? The visitors’ money would go directly to the well-being of the animals. According to the International Union for Conservation of Nature (IUCN), only $78,000 is needed to revive the local conservancies. I agree with Said, but visitation has been scarce. So, the next day back at camp, Said comes up with an idea. Tell your people to visit our wildlife refuge. Have them raise awareness and donate. Write an article about our forest. I sit in that armchair – half-photographing the colobuses foraging above my head – and start to write. 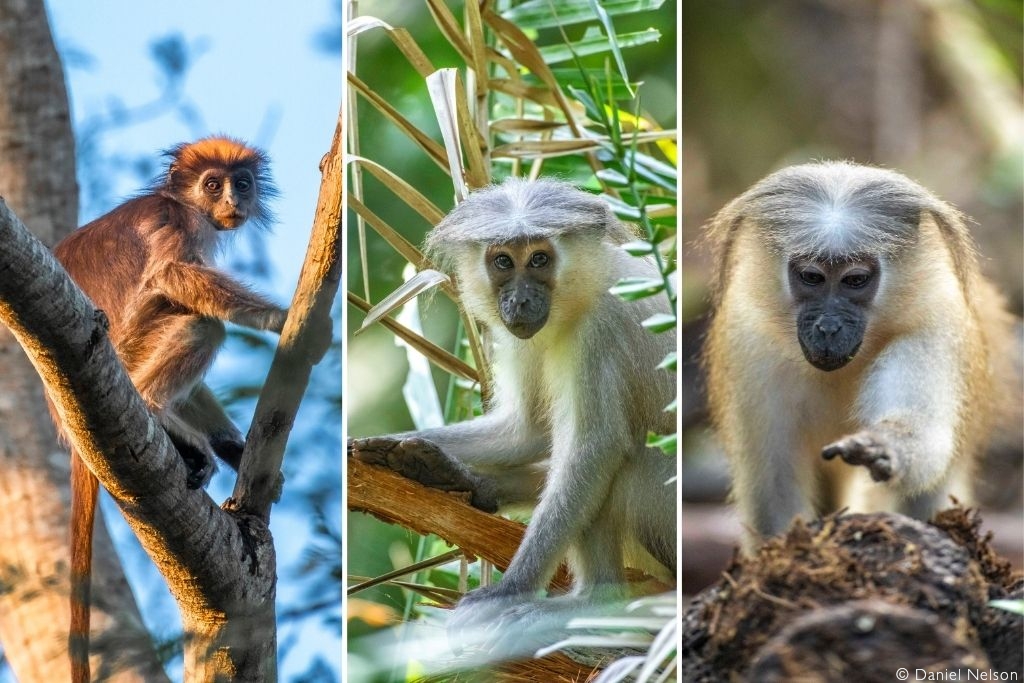 For more about adeventuring on the Tana River see here

Daniël Nelson (22) was launched into the spotlight in 2017, after winning the Young Wildlife Photographer of the Year Award from the London Natural History Museum. During the following years he worked freelance for the African Parks, the Peace Parks Foundation, and the World Wildlife Fund. Then, Daniël moved to London to read for a B.A in Photojournalism at the University of Arts. The pandemic struck during Daniël’s first year, leaving his degree covidized. Frustrated to know that the global environmental crisis lingered on with the world waiting, he repacked his rucksack and hit the road. His new goal:

There are 3,553 critically endangered animals in the world. Apart from the more iconic species such as leopards and rhinos, the majority of these are described as plain scientific texts in databases. Turning these texts into aesthetic, visual reports – for both awareness and conservation – is what Daniël’s mission is about. Connect with Daniel on Instagram  and his blog