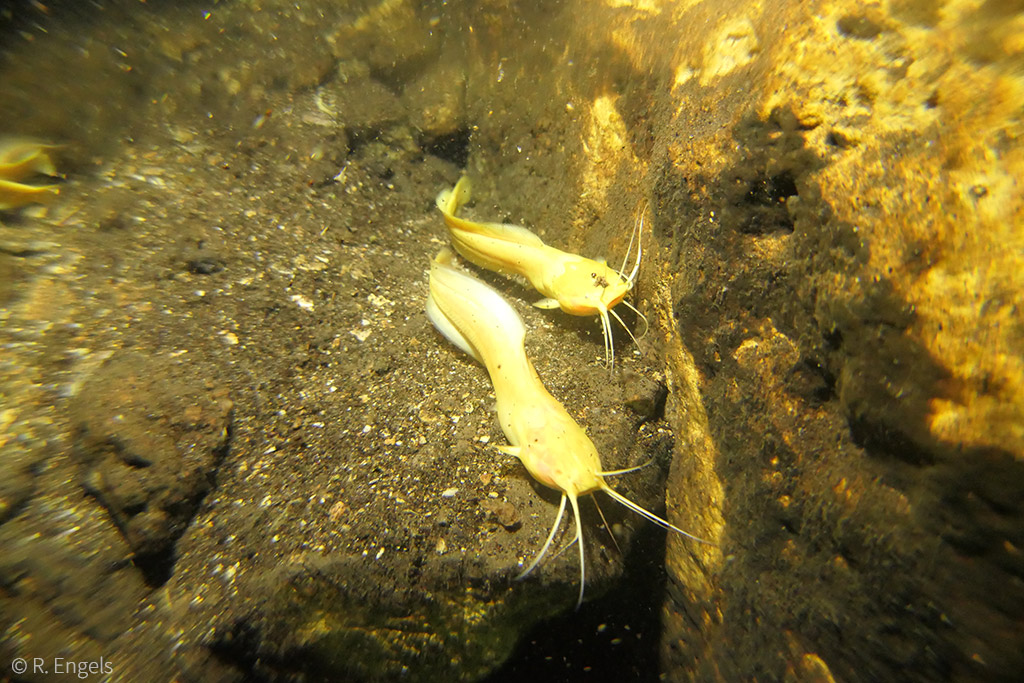 Clarias cavernicola or blind cave catfish, as it is called in English, is known only from one cave near Otavi in Namibia, where it lives in total darkness. It is classified as Critically Endangered by the International Union for Conservation of Nature (IUCN), the global authority on the status of nature and its species. The total population of catfish in the cave is probably less than 200 individuals, which is the minimum genetically viable population size required for any species to survive over a longer period of time. This makes the blind cave catfish one of the rarest freshwater fish species in the world.

This little catfish species, which grows only up to 17 cm long, has lost its eyes. Additionally, it lacks the pigmentation that produces the normal dark skin colour of other catfish species, and is thus a beautiful golden-pink. In a dark cave, eyes and skin pigmentation are not necessary for survival, so it is likely that not producing these characteristics is part of the catfish’s survival strategy. Conserving energy is especially important for survival when food is scarce. It seems that this rare catfish feeds mainly on invertebrates or insects falling into the cave. Another possible item on the catfish’s menu is an isopod (a shrimp-like organism) that is also endemic to this cave and lacks colour and eyes. Our research team further speculates that the catfish uses guano from the bats in the cave to supplement its meagre invertebrate diet.

The cave catfish seems to be closely related to the snakehead catfish found in the Kunene, Kavango and Zambezi rivers. Since catfish species in these rivers need a flood to stimulate breeding, we assume that the cave catfish needs similar conditions to breed. During Namibia’s summertime thunderstorms, water rushes into the cave and may stimulate breeding. We found that females carry about 50 transparent, sticky eggs with a greenish yolk. On a recent research dive we found smaller individuals of around 5 cm in length, indicating successful breeding within the last couple of years although very little is known about the growth rates of this species.

The water in the cave is currently very clear, but if that were to change it might negatively affect reproduction, as the sticky eggs will be smothered by particles suspended in the water, thus limiting the oxygen supply to the eggs. The newly hatched larvae of this catfish are very small, meaning their food source must be even smaller. The larvae of other catfish species feed on large zooplankton, but we do not yet know what the cave catfish larvae feed on; this is one of our future research questions.

A team from Dantica Diving did a recent research dive in the cave, with kind permission from the owner of the property where the cave is located. Given their rarity and vulnerability, studying this fish species calls for the utmost care to avoid disturbance and harm to individuals. On a previous dive, one of our team went down to a depth of around 90 metres and still did not find the bottom of the cave. Despite the great depth of the cave, the catfish were only found at a maximum depth of 15 metres. It seems they prefer to live near the surface on ledges where food is readily available. Consequently, the catfish is very vulnerable to lowering the water table, as much of their food source accumulates in an area that may no longer be accessible to them if the water level drops.

What will the future bring for this unique and rare fish species? Current threats to its survival include: direct negative impacts on the cave and its water, future climate change resulting in less rainfall and subsequent lowering of the water table, a decline in their food source and illegal harvesting for the aquarium trade. The survival of the blind cave catfish depends on the integrity of the entire ecosystem. Anything that negatively affects the ecosystem around the cave may eventually affect the catfish. It is therefore very important to protect the ecosystem around the cave, although factors such as climate change require international conservation efforts.

On a positive note, there seem to be more openings to the cave that we have not yet been able to explore. It is therefore possible that there are more catfish near these openings, but this has not yet been confirmed. The Namibia Nature Foundation is supporting this research project with funding from the Namibian Chamber of Environment and the Norwegian Institute for Nature Research. We hope to better understand these incredible, unique fish and ensure that they continue to survive in this cave, their only habitat in the world.