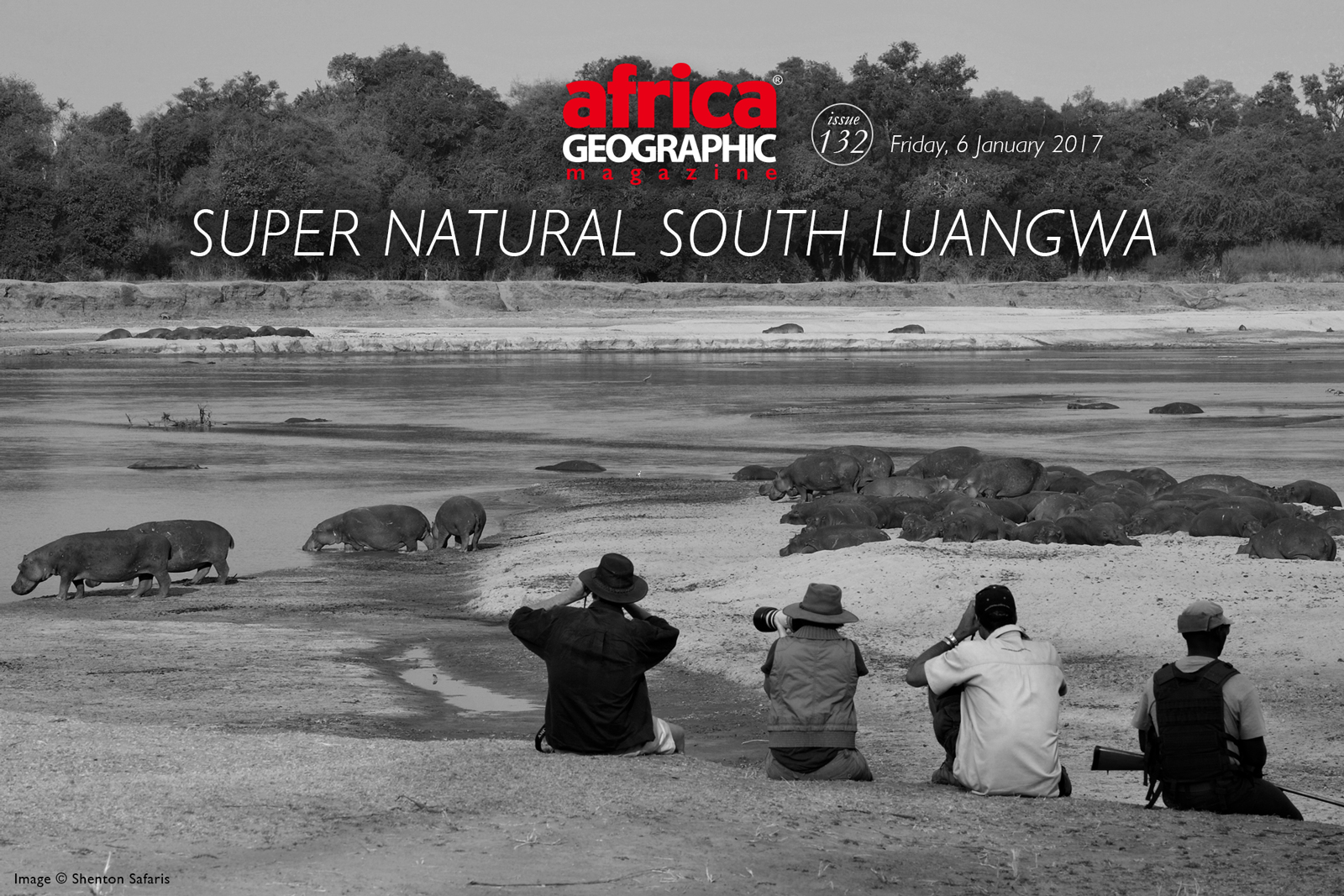 On safari in South Luangwa

“Turn left. Continue along the road, through a dry riverbed. When the road forks, keep to the left.” We were 371km from home, six hours into our journey, and at the bottom of page two of a three-page printout of detailed instructions describing how to get to South Luangwa National Park in Zambia.

We weren’t taking the usual route into the park. We’d decided to take a more adventurous approach, entering the park from the north, down the Muchinga Escarpment. The directions were explicit: “The road over the escarpment requires a high clearance, four-wheel drive and low range. The road is seldom used. Waiting for help if you break down might take days.”

The 450km drive took us eight hours to complete. One 12km stretch down the escarpment took an hour to cover. I spent most of that time with my foot firmly on an imaginary brake as my husband negotiated the steep and rocky descent.

South Luangwa is probably one of the most unspoilt natural habitats remaining in Africa. Founded as a game reserve in 1938, this 9,059km² area became a national park in 1972. It has some of the highest concentrations of animals on the continent.

Home to around 60 animal species, the park supports herds of elephant and buffalo that often number into the hundreds. The Luangwa River is also home to multitudes of crocodiles and hippopotamus. There are over 400 species of bird, including 39 types of raptor and 47 migrant species.

In addition to the abundant wildlife, the changing seasons add another dimension to South Luangwa’s richness. The dry, bare winter bushveld gives way to a lush, green wonderland in the rainy summer months.

There are two main areas of South Luangwa National Park that are accessible to visitors: the Mfuwe sector and the Nsefu sector. We had the privilege of visiting both. We started near Mfuwe Gate, the main entrance to the park, which has a bridge across the Luangwa River.

This is an ideal place for less experienced safari visitors to start, as game concentrations are high. However, it’s also the busiest part of the park. At times it can get a bit frenzied, as safari vehicles jockey to get the best views at lion kills or wild dog sightings.

Our first port of call was Track & Trail River Camp, a short distance from the Mfuwe Gate. The highlights of our stay here were the two dramatic lion kills we witnessed on our evening drives. Both victims were pregnant female impalas. They must have been mere hours away from giving birth. To see the babies being eaten before they had drawn breath was a stark reminder of the savagery of the African bush.

On the second evening, my husband decided to skip the game drive. However, he didn’t miss out on the wildlife. While napping in our chalet, he was rudely awoken by a rattle of the door handle. It was a clever baboon trying to get into the room. My husband’s shout dissuaded the intruder, but he could hear it trying all the other chalet doors, in the hope of making a raid on an unsecured room.

Abandoning his nap, my husband decided to laze by the pool, which is raised about four metres above the ground. Emerging from the water after a refreshing dip, he discovered he was almost head to head with a herd of elephants.

From Mfuwe, we moved deeper into the park to the Nsefu sector. The atmosphere here is remote, quiet and slightly more exclusive. Some of the most experienced guides in the Luangwa Valley work in the Nsefu sector, and it’s probably also the most game-intensive area of the park. It’s known in particular for exceptional leopard sightings.

Lodges and camps in this part of South Luangwa are only open in the dry season, from early May to the beginning of November. Because lodges here aren’t open all year, the animals don’t have constant exposure to people. They are less accustomed to vehicles and visitors, so the game viewing feels more natural.

We stayed at three stunning lodges in Nsefu, each special in its own way. Tafika Camp is on the banks of the Luangwa River, just outside the park boundaries.

We took drives into the park with co-owner and safari manager Bryan Jackson, who has been guiding in Luangwa for more than 20 years. On one of them, a group of four young male lions were happy for us to park just a hair’s breadth away while we sat watching them relax in the shade.

One evening during dinner at Tafika, the first rains of the season arrived – a welcome relief from the oppressive heat. The next morning, we found strange sliding prints all around our chalet. Luangwa’s infamous sticky black cotton soil becomes exceptionally slippery when wet, and it appeared that hippos had been skating around in the mud while we slept.

Hiding out with the locals

On the west bank of the Luangwa River, inside South Luangwa National Park, are Shenton Safaris’ Kaingo and Mwamba camps. To save ourselves a long drive, we left our vehicle at Tafika Camp and canoed a short distance across the river. We clambered up the bank on the other side and into a waiting safari vehicle.

Derek Shenton, who created the camps, took us on a tour of three of his famous hides. The first was a permanently anchored boat in the river, facing a bank where a large colony of carmine bee-eaters have excavated their nests. We sat in the hide, watching the birds swoop over the water, darting in and out of their burrows to feed their young.

At Mwamba camp, we were concealed directly in front of a waterhole, at eye level with impalas, kudu, buffalos and warthogs as they took turns to drink. We were so close that we could see and hear drops of water falling from their mouths between sips. Guinea fowl, Lilian’s lovebirds and weavers darted between the animals.

At the third hide, we were almost close enough to touch the oxpeckers hopping along the backs of a large pod of hippos. As we sat watching the hippos and their nursery of youngsters, a family of elephants, also accompanied by several babies, came to drink just a few metres in front of us. Although they appeared oblivious to our presence, I felt that the piercing gaze of the matriarch occasionally seemed to look directly through the hide and straight into my eyes.
On drives at Kaingo, we spotted so many lions that we were in danger of becoming blasé about them. To top it all, we had a fabulous sighting of a leopard stretched out on a tree branch. When we came back to check on her later, we found her feeding on a kill she’d left concealed in the undergrowth while she slept.

We paddled back across the river from Kaingo, collected our car, and drove on to Nsefu Camp. Built in 1951, before South Luangwa had even been declared a national park, it’s situated on a picturesque bend of the Luangwa River.

This spot is perfect in two ways. Firstly, a well-positioned chair in the shade makes for a very scenic location to read, relax and look out for local wildlife. Secondly, and more importantly, the camp is ideally positioned to catch a welcome river breeze on hot days at the end of the dry season.

On one early morning walk at Nsefu, we found ourselves amongst a herd of buffalo several hundred strong. Suddenly, we heard a loud and anguished bellow.

Two buffalos had been involved in an altercation. The result was that the horn of one had been wedged into the posterior of the other, producing understandable cries of distress.

Fortunately, the horn was extracted without too much delay, and the two continued on their way – although the injured party might have been limping slightly.

On our final night at Nsefu, we watched nine wild dogs demolishing the carcass of an impala, stripping it of the meat and organs and leaving only the skin, head and skeleton behind.

No need to leave the lodge

Our final stop was Kafunta River Lodge. The night before we arrived, a large tree had fallen over inside the camp. We were greeted by a whole family of elephants, including a tiny baby, feasting on the fallen branches right there in the middle of the camp. These elephants are frequent visitors, and we repeatedly saw them wandering through the grounds.

The dining area at Kafunta looks out over a floodplain and a waterhole, both full of wildlife from before sunrise to well after sunset. First thing in the morning come the giraffes, followed by buffaloes, elephants, and impalas. Along with the resident hippos and plenty of birdlife, you barely need to leave the lodge to see some fantastic things.

When drilling for a borehole some years ago, Kafunta struck gold, unexpectedly tapping into a natural hot water spring. This spring now flows into a hot tub that also overlooks the waterhole. However, with temperatures in the mid-40s during our stay, we hadn’t been tempted to try it.

But, as the sun went down on our final day in South Luangwa, dark clouds gathered, and thunder rumbled promisingly. When the skies opened, and rain fell in sheets, the hot tub was the perfect place to sit. Up to our waists in warm water, with refreshing cold drops falling on our shoulders, a gin & tonic in hand, and hippos huffing and puffing below us, it was a truly magical end to an enchanting visit.

Walk on the Wild Side – North Luangwa 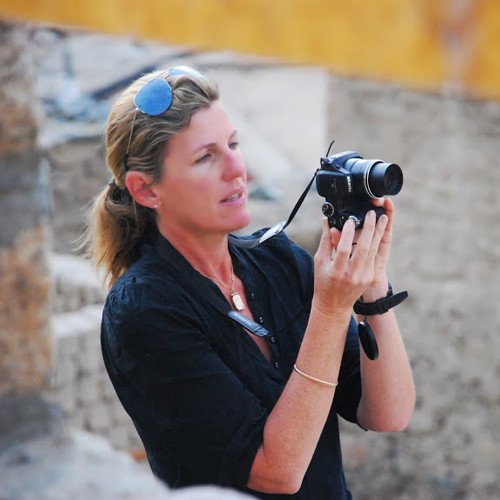 Born and raised in Sydney, Australia, before moving to Africa at the age of 21, Sarah Kingdom is a mountain guide, traveller, and mother of two. When she is not climbing, she also owns and operates a 3,000-hectare cattle ranch in central Zambia.
She guides and runs trips regularly in India, Nepal, Tibet, Russia, Turkey, Uganda, and takes travellers up Tanzania’s Mount Kilimanjaro numerous times a year.