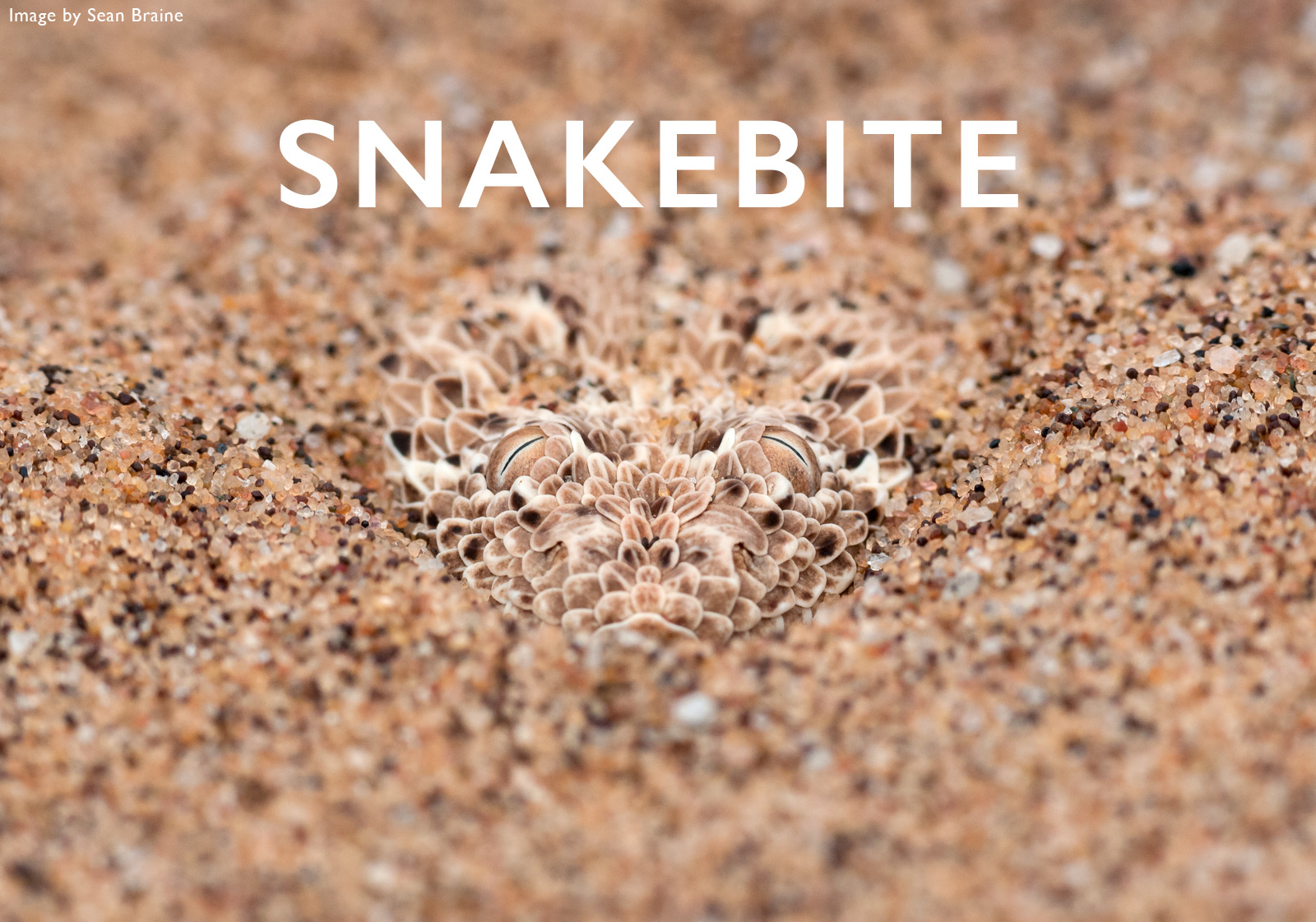 People panic in the event of a snakebite. The victim panics – so much so that he or she may get nauseous and start vomiting; those in attendance panic and make poor decisions as to applying first aid and assisting the victim; even doctors panic when faced with an emergency – several have called me, desperate for advice. So, when young Crawford Coulson walked into my office one Saturday morning in the Valley of a Thousand Hills (near Durban, South Africa) with a terrified look on his face and said, “I have just been bitten by a black mamba,” I knew I had to think fast.

I had no doubt that Crawford knew what he was talking about – he was the snake park curator at Assagai Safari Park, a crocodile and snake park in the Valley of a Thousand Hills. Although it may take anything from 3 – 16 hours for mamba venom to kill an adult, there are many cases where the victim has died within an hour.

“I have just been bitten by a black mamba”

We were about thirty minute’s drive from Addington Hospital in Durban and Crawford clearly had a severe bite – the snake bit him on the back of the calf and its fangs got stuck for several seconds. Within minutes Crawford complained that his lips were going numb. I got him into a vehicle and ran to the restaurant for help, but it was chaotic with tourists that had just emerged from two luxury buses. I drove to the owner’s house about 100 meters up the driveway, but the house was empty – they had all gone shopping.

I sped off for Addington hospital with the little BMW drifting from side to side as I took the corners on the highway. After fifteen minutes Crawford was going downhill fast. He was sweating profusely, finding it difficult to keep his head up, and his speech was intermittent and slurred. I contemplated stopping at the closer Westville Hospital but knew they did not have a trauma unit, and I was not sure whether doctors would be available to deal with a snakebite emergency. I resolved to head for Addington, the main snakebite hospital in Durban at the time. The road was busy, as it is most Saturday mornings; I had my emergency lights on and I was hooting to usher vehicles out of the way. As I entered Durban off the Western freeway I blew the fuse on the hooter and had to worm my way through traffic.

Crawford survived the bite without antivenom

As I pulled into Addington, Crawford was slipping into unconsciousness and he was rushed into I.C.U. There was chaos and panic as they had no antivenom. But eleven hours later, after excellent hospital care, Crawford was out of danger and he returned to work within a few days.

Miraculously, by being placed on a ventilator, Crawford survived the bite without antivenom.

The major effect of neurotoxic envenomation is that the venom paralysis the chest muscles and the victim stops breathing. But if the patient is properly ventilated, he or she may survive the bite without antivenom as the body eventually breaks down the venom – I stress, may survive; this is risky and does not always work.

Mamba bites are few and far between in South Africa, and in most years we hear of just a dozen bites or so. This deadly snake with its fearsome reputation and supposedly aggressive nature is far from the deadly attacker that people imagine; the black mamba is in fact a very shy and elusive snake that is quick to escape when disturbed. But if cornered or threatened without hope for escape, it will bite and may even deliver multiple bites.

In Crawford’s case, the snake was coiled up in the morning sun and fast asleep when he accidentally stepped onto it. About two weeks later I caught a 2.5metre black mamba a few paces from where Crawford was bitten.

In Southern Africa, snakebite is a reality that many people have to deal with. There are over 170 different types of snakes in the region and of them, about 20 are potentially deadly. In the region of 7,000 snakebites are recorded annually, with close on 50 fatalities.

The vast majority of snakebites are inflicted by snakes with cytotoxic venom. Cytotoxic venom, though extremely destructive to tissue, seldom causes fatalities and most victims recover quite quickly although some require multiple operations to counter the devastating effects of the destructive venom on body tissue.

Most common snakes responsible include:

Other snakes with predominantly cytotoxic venom include:

Neurotoxic venom
The two snakes that cause most fatal bites are the black mamba and Cape cobra. Their venom is potently neurotoxic and fast-acting.

The snakes responsible include:

Symptoms include:
– Nausea.
– Slurred speech.
– Ptosis (drooping or falling of the upper or lower eyelid).
– Progressive weakness.
– Eventual paralysis of chest muscles causes difficulty in breathing and death. In severe cases victims struggle to breathe within 20 minutes, but in untreated cases death could take anything from about 4 – 16 hours.

Haemotoxic venom
Two of Southern Africa’s snakes, the boomslang and the twig or vine snake, have haemotoxic venom which affects the blood clotting mechanism. Fortunately, both these snakes are placid and seldom bite unless captured or accidentally stepped on. One or two boomslang bites are reported yearly and virtually all twig snake victims are snake handlers.

The snakes responsible include:

Symptoms include:
– Victims may experience no symptoms for several hours after a bite but eventually blood starts oozing from the fang punctures.
– This is followed by a bleeding nose, bleeding from the mucous membrane and eventually massive internal haemorrhaging. This could take a day or two and in untreated cases a slow and painful death.

Most snakebites occur in the warm wet summer nights from January to March/April.
Should you encounter any snake, back off and move away. Five metres or more from any snake is a safe distance and it is a myth that snakes chase after people. Even the deadly black mamba never chases people and avoids confrontations unless cornered. It is not an aggressive snake and seldom accounts for bites.

– Wear adequate boots when in the field.
– Never handle any snake, no matter the size (some snakes play dead).
– Use a torch when walking at night.
– Keep your tent zipped closed at all times when camping.

In the event of snakebite

In the event of a snakebite, it is best to keep the victim calm and rapidly, but safely, transport them to the closest hospital that has a trauma unit.

Do not do any of the following:
– Never cut or try to suck the venom out. It does not work and you will do more damage than good.
– Never apply a tourniquet. Arterial tourniquets do not slow down the rate at which venom is absorbed and often do far more damage than good.
– Do not apply ice or heat and never give the victim alcohol.
– Forget about traditional remedies including Condy’s crystals and charcoal – there are absolutely no traditional remedies that help for snakebite.
– Never inject antivenom, cortisone or antihistamine. Antivenom is highly effective when required and must be administered by a medical doctor in a hospital environment. Many people are allergic to antivenom (it is made from horse blood) and in severe cases may result in anaphylaxis – a critical medical condition that will require urgent medical intervention by a doctor.

The biggest danger is a neurotoxic bite that affects breathing

The first aid options for snakebite are limited and victims need to be transported to a hospital urgently. The biggest danger is a neurotoxic bite that affects breathing. If you are several hours from a hospital and have pressure bandages (crepe bandages), and you are quite sure it was a mamba or cobra bite, you can apply the pressure bandages around the limb from the bite towards the heart as tight as you would for a sprained ankle. This puts pressure on the lymphatic system and may delay the rate at which venom is spread through the body. But the pressure bandage should not be used for cytotoxic venoms where there is a lot of swelling.

Otherwise, one can assist breathe the patient or resort to C.P.R. but that is seldom effective for more than 15-20 minutes. Never attempt mouth-to-mouth resuscitation without a face mask – you do not want to swallow someone else’s bodily fluids. The most effective form of first aid in serious bites from snakes with neurotoxic venom is the use of a bag valve mask (BVM) and could be life-saving. But one would need some training in how to use a BVM – something worth considering if you are far away from medical help or often venture into the bush.

The African Snakebite Institute provides a variety of snake awareness and first aid for snakebite courses. More details on snakebite are available in the book Snakes and Snakebite in Southern Africa and the downloadable app: Snakebite First Aid Africa.

Johan Marais has devoted most of his life to his favourite hobby – reptiles. He grew up in Montclair, Durban where he encountered common reptiles regularly. In his early twenties he worked at the Fitzsimons Snake Park in Durban and then moved up to the Transvaal Snake Park in Halfway House where he worked as curator for three years followed by about six years farming crocodiles. During this time he was an active member of the Crocodile Specialist Group of the International Union for Conservation of Nature.

Over the years Johan has conducted numerous reptile field trips with friends and scientists either in search of specific reptiles or conducting reptile surveys. Today he spends most of his time lecturing on reptiles, training people how to safely handle snakes, conducting field trips, photographing reptiles and talking on the corporate circuit.