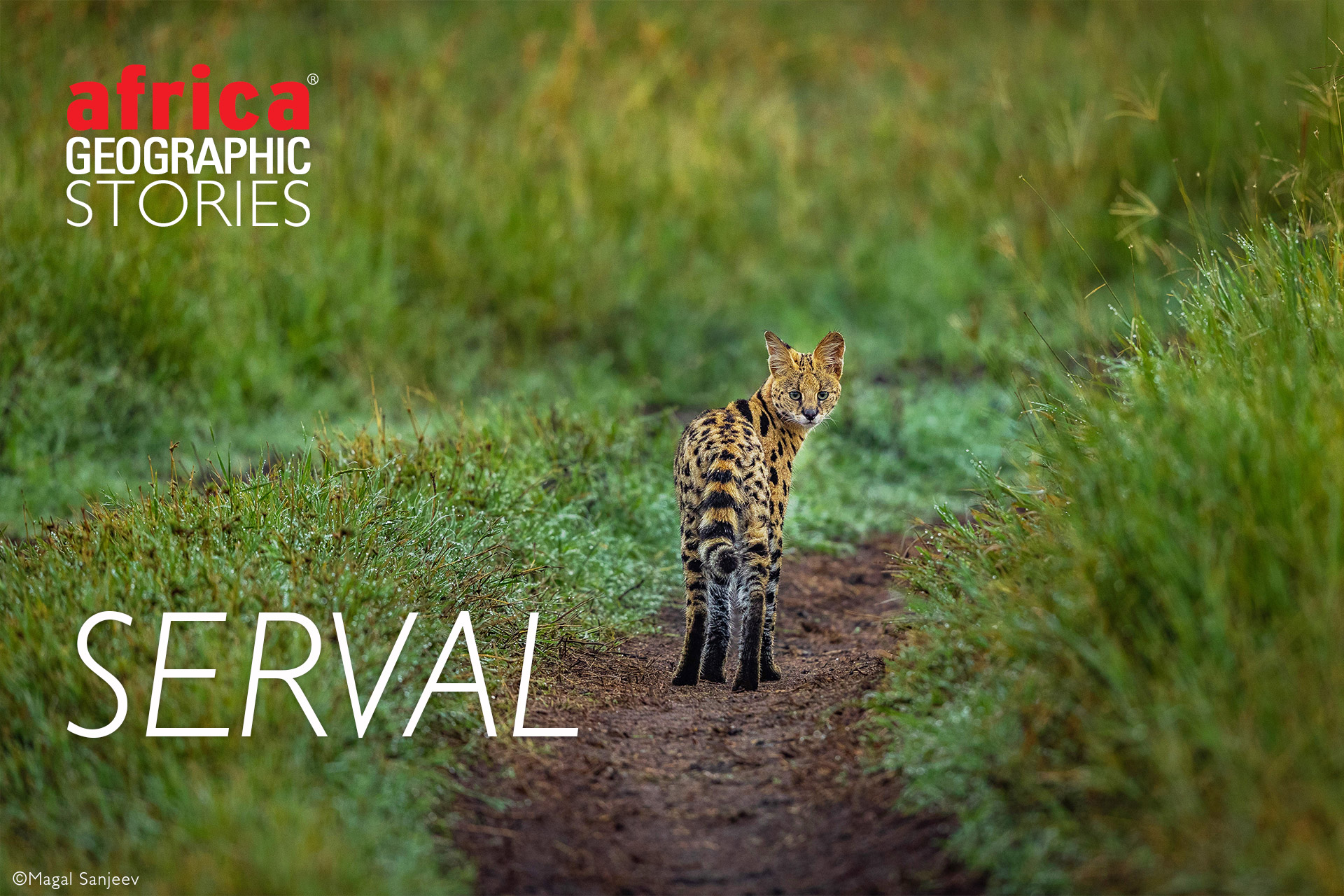 The cat on spring-loaded stilts

Across the runways of Paris, New York and Milan, supermodels parade the latest fashions draped across their slender frames. With steely looks and pronounced cheekbones, these young and glamorous walking clothes horses are, in theory at least, the pinnacle of human attractiveness. Yet for all the effort that goes into achieving this particular look, there is an African cat that effortlessly achieves the same effect: the serval.

The striking servals that stalk the savannahs, plains, wetlands, and forests of Africa bear a certain similarity to these leggy models, sporting a matching kind of composed elegance. These servals are, in essence, the ultimate masters of the catwalk (and stalk and leap and pounce).

The serval (Leptailurus serval) is a medium-sized cat that looks somewhat like a cross between a small cheetah and a large house cat. In reality, they belong to the “caracal lineage” of the Felidae family, along with caracals and African golden cats, though their peculiar shapes, spotted colouration and missing ear tufts set them apart from the other two species. Servals have the longest legs in proportion to their bodies of any of the cat species (hence the model comparison) and a tawny-gold coat dotted with a mixture of spots and stripes. Like caracals, their tails are relatively short in comparison to other cat species. There are rare sightings of melanistic servals, particularly in East Africa, and leucistic individuals have been born in captivity.

Though the serval is the only member of its genus, there are currently three proposed subspecies recognized by the IUCN’s Cat Specialist Group: L.s. serval of Southern Africa, L. s. lipostictus of East Africa and L. s. constantina of Central and West Africa. These distinctions, however, are based mostly on the trend observed within other African cats, rather than genetic analysis, and may change as further research comes to light.

Solitary and silent, servals are seldom seen but surprisingly widely distributed across a range of habitats in most of sub-Saharan Africa. There are also some small and isolated populations scattered in North Africa – specifically in Morocco and Tunisia. As a general rule, servals are not fond of arid areas. They prefer wetter habitats where rodents tend to be densely populated, with the exception being the central tropical rainforests of Africa, where they are notably absent. 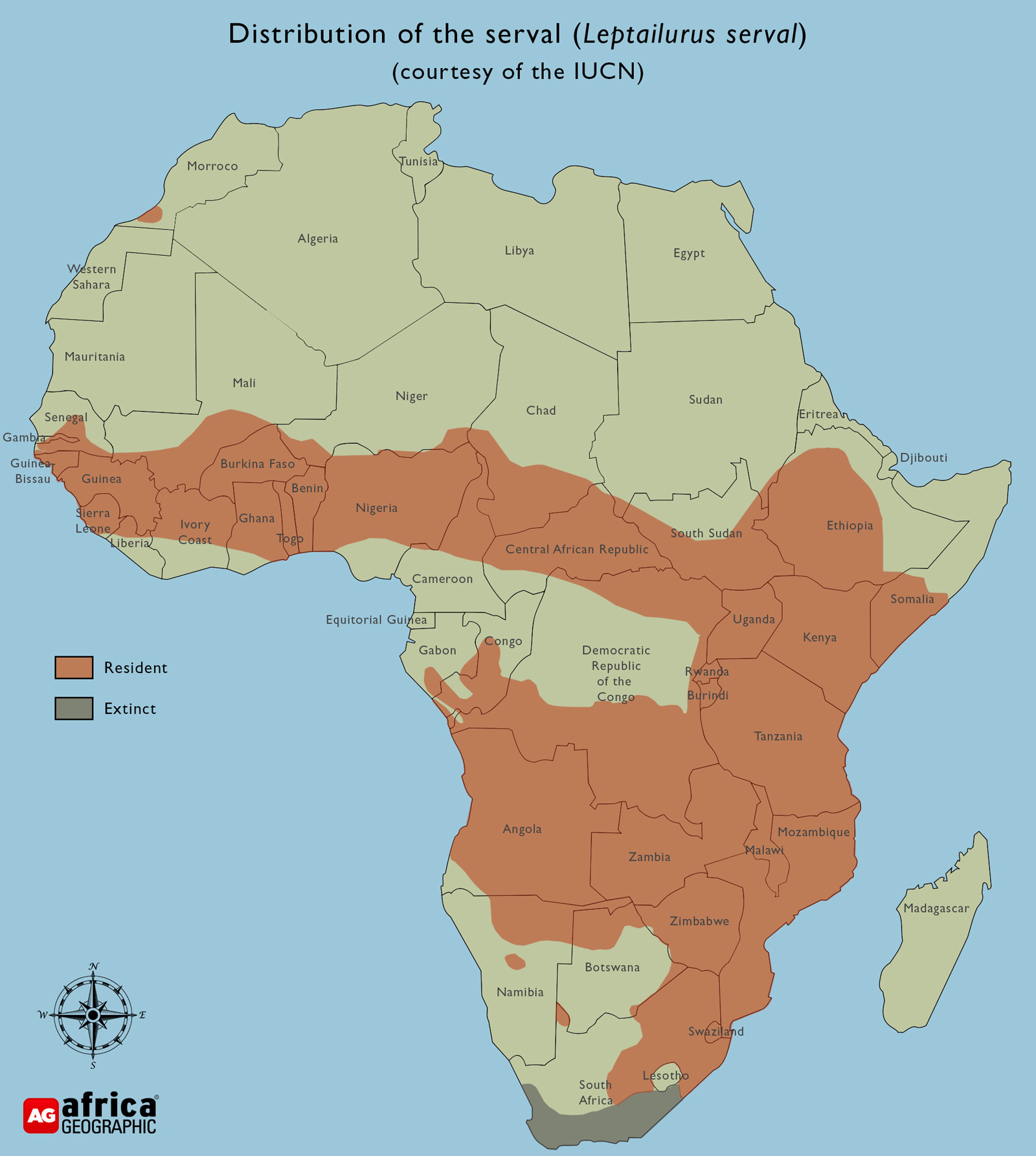 The lanky limbs of the serval are not only useful in navigating long grass and dense wetland vegetation, but they confer the serval’s most well-known ability – a gravity-defying leap. The extended metatarsal bones and elongated and unusually mobile toes provide the perfect attachment points for a complex arrangement of tendons and muscles that store and release elastic energy. The result is that servals have been recorded leaping close to 3m straight up and 4m forwards, occasionally snatching hapless birds out of the air at the same time.

Aided by this penchant for pouncing, servals are exceedingly proficient hunters. While current research indicates that the diminutive black-footed cat holds the highest hunting success rate of any member of the cat family, the serval vies closely for the top spot. Studies conducted in Tanzania indicate that some servals have a hunting success rate of over 60%, with the possibility that this number is closer to 80% when only rodents are considered.

The secret to this success lies in the serval’s hunting strategy. They are consummate ambush predators that use their massive, radar-like ears to detect the smallest movements of anything from rodents, insects and reptiles to birds and antelope lambs. Prey detected; the serval stealthily moves into a spring-loaded crouch, frozen until the time is right to launch an attack with legs drawn up to their chests and descending upon unsuspecting victims from above. Anything that manages to dodge this aerial assault is rapidly chased down in long strides. Snakes require a more combative approach, with lightning-fast blows from the forepaws dispatching them from a comfortable distance.

This particular strategy is most effective at night, and servals are described as primarily nocturnal. However, they are equally comfortable utilizing the daylight hours, particularly in the early mornings and at dusk. When large kills are made, servals have been observed caching the carcasses, hiding them beneath leaves and grasses.

Efficient hunting is vital for mothers of young kittens. As is the case with all solitary cats, the females with dependent kittens expend approximately twice the energy and time hunting to keep their litters well-fed. The altricial kittens are born blind and weighing just 250g, covered in soft grey fur and entirely dependent on their mothers. The litters of between one and four kittens are hidden beneath dense vegetation or in abandoned burrows, and the mother starts to bring food back to the den when they are around a month old.

The transformation from vulnerable fluffballs to fierce little predators is a rapid one, and the kittens start hunting at around six months old as they acquire their permanent teeth. They will accompany their mother on hunts for the next six or so months before reaching full independence at around a year old. Overly attached youngsters who exhibit a reluctance to leave their mother’s side are eventually met with aggression as she chases them out of her territory.

The serval social structure and territory layout is not dissimilar to that of leopards, albeit over smaller home ranges of 10-32km2. Both males and females mark and defend territorial boundaries against members of the same sex, though physical confrontations seem to be quite rare. The territories of the males are larger than those of the females, and one male’s range may overlap the ranges of several females. Territory size and serval density are dependent on the resources available to them. When the habitat is suitable, and prey is abundant, the territories will be smaller in size and the population density will be higher.

The males and females generally only associate when the female is in oestrus, a state that she advertises through increased urination and repeated vocalizations.

Naturally, the main anthropogenic threat to servals is the constant degradation and loss of suitable habitats, particularly wetlands and grasslands. Fortunately, however, servals have proved to be highly adaptable and appear to be more tolerant of disturbed landscapes than many other mammal species. Recent research seems to indicate that the highest density of servals anywhere in Africa is in Secunda, South Africa, in the buffer zones surrounding a coal liquefication plant where they prey on the abundant rodent population.

To a lesser extent, trade in serval skins poses a particular threat to the servals of North and Central Africa. At the same time, in West Africa, their parts are used for ceremonial and medicinal purposes. Rural pastoralists may also target servals as a potential threat to livestock.

For now, however, the serval is listed on the IUCN Red List as “Least Concern”, though the populations north of the Sahara are considered to be “Critically Endangered”. These northern populations are primarily isolated to Morocco, though servals were reintroduced to Feijda National Park in Tunisia. While servals were once recorded in Algeria, fears are that they are now extinct there.

Over recent decades, the serval has seen a surge in popularity as an exotic pet, and the first savanna cat (an occasionally fertile hybrid between a serval and domestic cat) was bred in 1986. Most countries have strict regulations around keeping wild animals as pets, but in areas where such restrictions are more relaxed, exotic breeders have flourished.

While fortunately, the breeders supply most of the pet trade without significant impact on wild populations, there are practical and ethical realities to keeping a serval as a pet. Slender they may be, but a serval is an immensely powerful animal that can weigh close to 20kg and live for 22 years. Most importantly, their wild instincts are imprinted from birth. While pet sites are full of testimonials about how servals make wonderful, almost dog-like pets, the various rescue centres now home to abandoned, “troublesome” adult servals tell a vastly different story. It is unaccountably cruel to breed an animal genetically programmed to stalk the wilds of Africa and put it in a harness or cage as a status symbol and ego-boost.

For those looking to see an elusive serval where it truly belongs – in the wild – there is good news. Over recent years, particularly in East Africa, serval sightings are becoming increasingly common as more time and effort has been put into understanding their movements. For a fortunate few, this has resulted in astoundingly intimate glimpses into the lives of one of Africa’s most graceful cats.

And, the more time we spend with them, the more we will learn about these mysterious little cats with their model-like limbs, handsome faces, and sense of absolute self-possession. 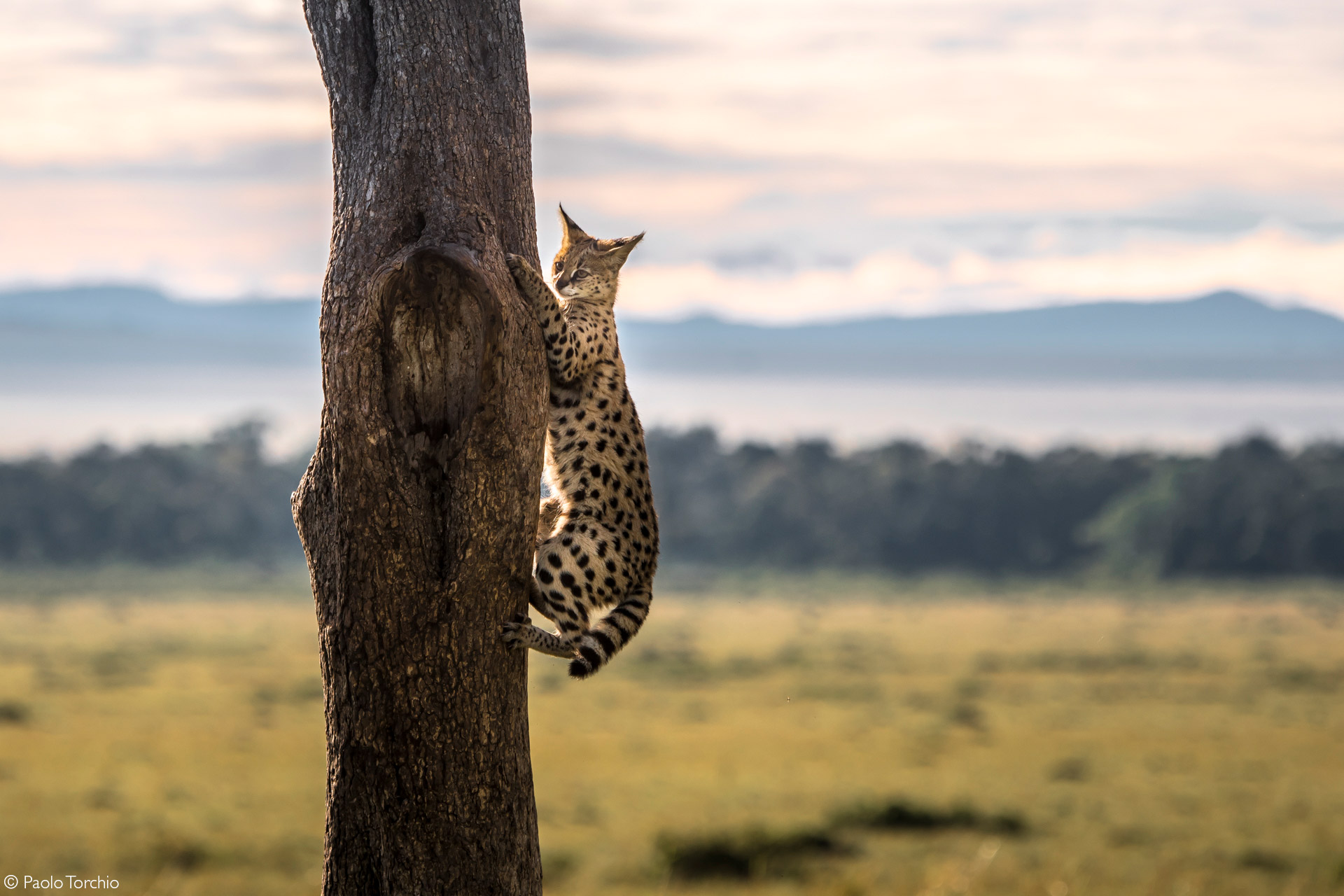