Posted on May 28, 2015 by Guest Contributor
ShareTweetPinEmailShareShareLinkedIn

The infamous black mamba is a snake with an unfortunately bad, and arguably exaggerated, reputation. It is the most feared snake in Africa and is known for being highly aggressive and thought to attack without hesitation. However, this is not quite true. Written by: Nick Evans Black mambas are majestic animals that are incredibly strong and intelligent with a keen sense of sight. They are very alert and active snakes with a fast metabolism, which means that they are able to digest prey quickly.

During the day, they actively hunt on the ground and in trees. They’re excellent climbers and often bask in the sun from the treetops in the morning. Their diet consists mainly of rodents, dassies and birds, but they’re happy to eat other small mammals and lizards as well. The way that black mambas kill their prey is quick and efficient. They strike the animal, injecting it with their potent, fast-acting neurotoxic venom. They then wait and let the venom do its work. The bitten animal dies shortly after being envenomated. The mamba then starts working its jaws around the dead animal and swallows it whole.

Contrary to popular belief, black mambas are also not actually black. They usually have a grey or light brown colouration with a white underbelly, which turns a shade of black towards the tail. Their name comes from the inside of the mouth, which is pitch black. 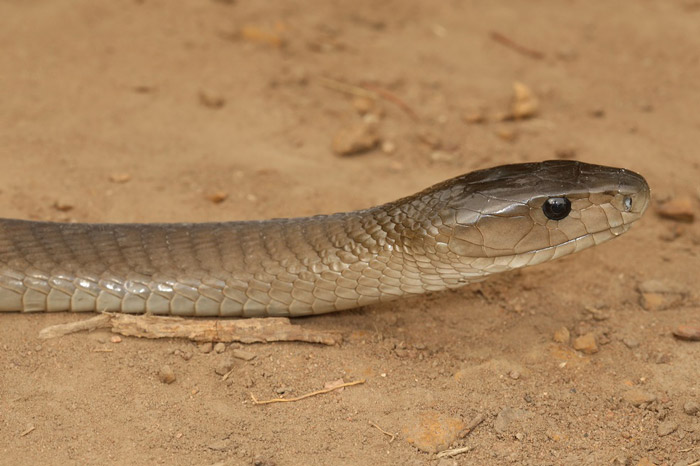 Black mambas are not nearly as aggressive as they are made out to be. If disturbed, they are quick to disappear. They are one of the fastest moving snakes in the world so can be gone in seconds and tend to flee, rather than fight.

If threatened, they will raise their heads off the ground, spread their narrow hood, and gape at the threat, thus showing off the pitch black inside of their mouth. This serves as a warning sign and can prove to be intimidating enough. Humans have this warning to be thankful for, as a bite can kill a human quicker than most other snake species.

It is also widely believed that black mambas move on top of grass and sugarcane. This belief stems from the fact that they often raise their heads up off the ground while making an escape. Claims have also suggested that mambas can raise themselves high enough to stare at human eye-level. While they do indeed have the ability to rise high up off the ground, possibly to chest height, this is a rare occurrence and they usually disappear long before they need to take this line of defence. 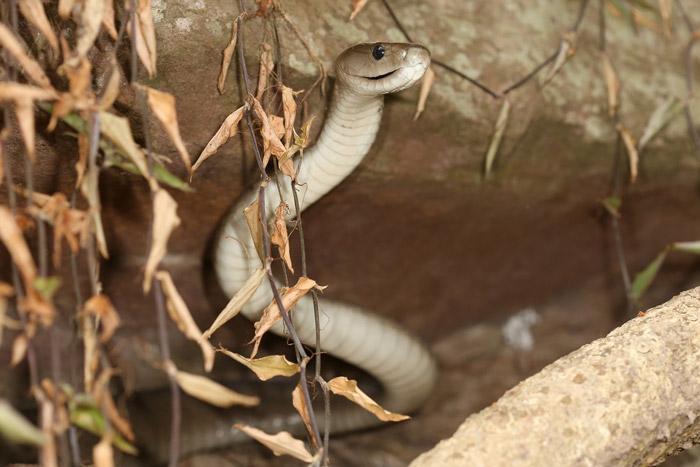 I remove snakes from places in and around Durban, South Africa. I have received quite a few calls to catch mambas in homes and I have also removed one that got stuck in the dashboard of a car. I find it a real honour to capture and then release these iconic reptiles back into the wild.

If you ever have the privilege of encountering a black mamba in the wild, try to appreciate and enjoy the sighting. Admire its beauty and watch how it moves through the bush. There’s just no other snake quite like a black mamba.