Posted on September 6, 2021 by teamAG in the News Desk post series.
ShareTweetPinEmailShareShareLinkedIn

Bayview Wind Power (Pty) LTD plans to build a wind farm (wind energy facility or WEF) on the western slopes of the Sundays River Valley with the closest turbine just five kilometres from the western boundary of the internationally acclaimed Addo Elephant National Park. The development is planned to consist of some 40 turbines with a turbine tower height of 150m and a blade diameter of 150m – a total height of 225m. (This is more than twice the height of the Statue of Liberty).  The proposed wind farm falls within both the park’s buffer zone and viewshed protection area. 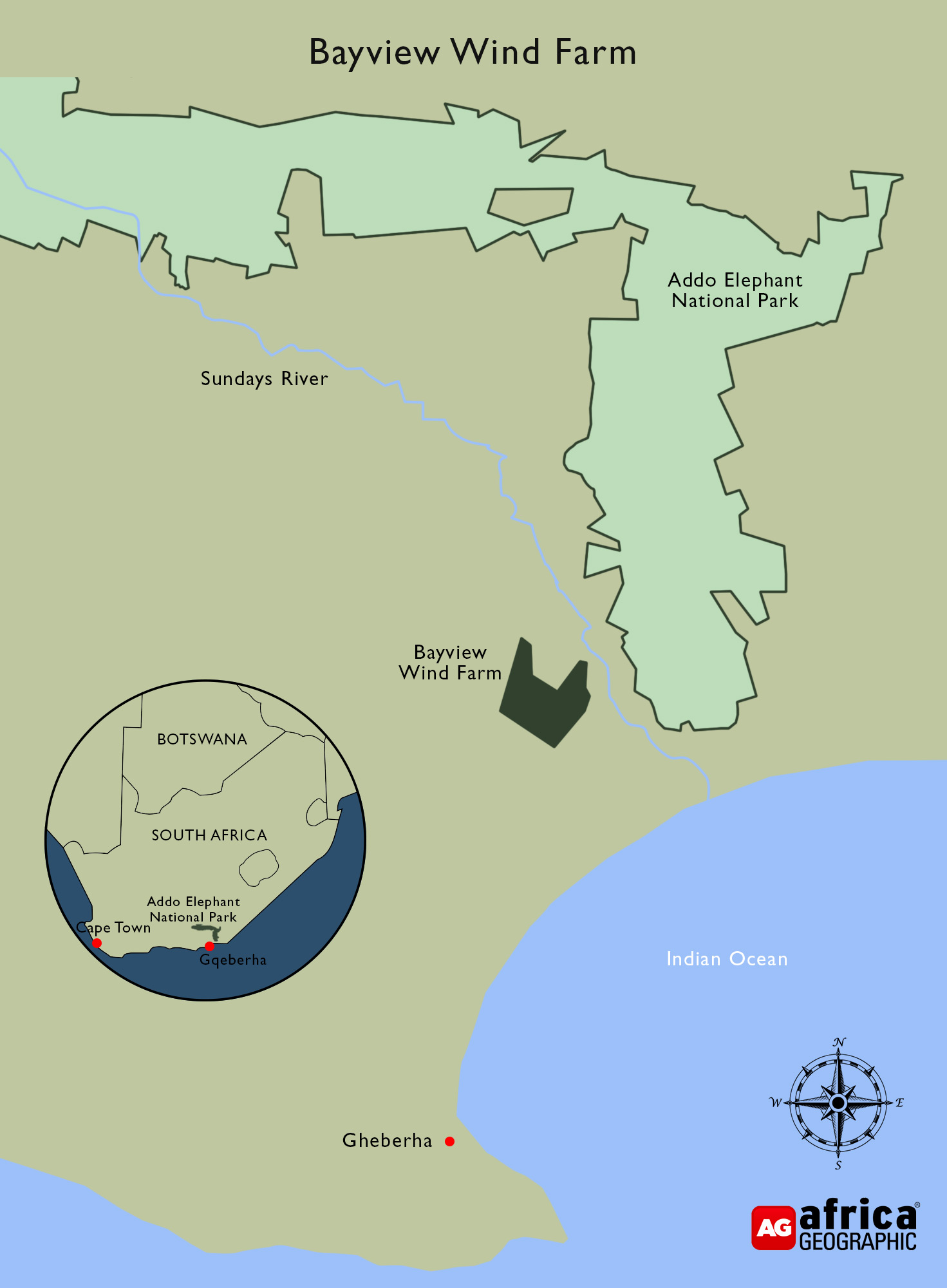 A number of groups have raised concerns about the proposed development, the major ones being SANParks (as the custodians of Addo Elephant National Park), Wilderness Foundation, the Endangered Wildlife Trust, and Indalo (a consortium of private game reserves that form the nucleus of the proposed Addo to Great Fish corridor). Grass Ridge WEF, a neighbouring wind farm concerned about the impact of the new development on their energy production, has also objected. (Note that Grass Ridge’s location to the west of Bayview means that it is not subject to the same environmental concerns as Bayview).

Around 20 September 2018, the final environmental impact report (EIR) for the Bayview WEF was submitted to the Department of Forestry, Fisheries and Environment (DFFE). This was after a public consultation process that included public engagement on the Draft Scoping and Draft EIR reports. Rather bizarrely, the records indicate that SANParks was either not adequately consulted or had nothing to say about the EIR for a massive industrial development on the doorstep of one of their greatest assets: the Addo Elephant National Park.

The environmental impact assessment (EIA) documentation was sent to three SANParks email addresses. One address had a spelling mistake, one was to an official no longer working at Addo, and the other was to a junior who saw no reason to pass it on to anyone else. Whatever the reason, the right people at SANParks did not appear to have had sight of the wind farm EIR. Strangely, the environmental consultant (CES) apparently did not pursue comment from SANParks. It is unclear why CES did not persist in trying to contact Addo management, given their major role in the region and the development being located in the Addo buffer zone and viewshed. It is also unclear as to why CES failed to mention in their reports the fact that the Bayview development would be in the Addo buffer zone.

On 4 February 2019, the environmental authorisation was granted by the DFFE. This authorisation galvanised Grass Ridge WEF, and they lodged an appeal. In broad strokes, the basis of their appeal was that the Bayview turbines’ proposed locations and specifications would cause turbulence for the Grass Ridge turbines, which would, in turn, cause a decrease in efficiency for Grass Ridge, as well as an increase in wear and tear.

After this appeal, the Minister duly set aside the authorisation for the wind farm and sent it back for further ‘wake impact assessment’ on 14 October 2019. Bayview then undertook a wake impact assessment and rejigged their turbine layout plan, increasing the turbine height to 150m and dropping three turbines from the plan. They then resubmitted the second EIR for public comment.

This time around, the right people at SANParks saw the amended EIR during the public consultation phase and were predictably alarmed. They objected for several reasons (see below). The Wilderness Foundation, which carries out anti-poaching aerial patrols in and along the Addo boundary using light aircraft, also objected.

SANParks objected on the basis that:

SANParks submitted a specialist report on elephant communications. Despite the objections, the second EIR was submitted to the DFFE in November 2020. SANParks’ concerns were either dismissed or downplayed and, in some cases, seem to have been ignored. SANParks then formally met with the DFFE in December 2020 to alert them to the seriousness of Bayview’s impact on the park but apparently to no avail.

A group of private game reserve owners called Indalo, realising that SANParks seemed to be at the mercy of the DFFE, then decided to make common cause with SANParks as a ‘friend of the environment’. They enlisted another environmental consultancy (EScience Associates) to complete an independent environmental assessment of the Bayview wind farm. EScience compiled independent specialist reports and found that the same objections made by SANParks were valid and wrote to the DFFE warning them of the fatal defects of the EIR for the following reasons:

Noise and faunal noise impacts:
The low-frequency noise generated by the turbines will impact elephants and elephant communication. A multidisciplinary team of scientists led by Dr Angela Stoger-Horwath of the Mammal Communication Lab of the University of Vienna considered the impact of wind turbine noise on elephant communication and found that it could be a significant problem for one of the country’s most iconic elephant herds. Of further relevance, an acoustic engineer from Machoy (consulting acoustic engineers) noted that the general noise level at the boundary of Addo would exceed permissible limits.

Visual and tourism impacts:
An independent visual impact study found that the Bayview WEF would significantly impact Addo’s southern game viewing section. This was contrary to the CES visual impact assessment that did not consider any views from Addo even though the closest turbines are just five km from the park. The impacts of a wind farm situated so close to the boundary of a national park that relies heavily on tourism for income and acts as a tourist focal point for the Eastern Cape is clearly not desirable. (SANParks generates around 85% of their income from tourism and relies on 15% additional income from DFFE).

Aviation impact:
The turbulence caused by the turbines will cause dangerous conditions for the light aircraft flying antipoaching patrols.

Biodiversity:
Parts of the Bayview operation fall within or near a critical biodiversity area, causing a threat to various amphibians, reptiles (including a critically endangered species), birds and mammals (particularly bats).

Precedent:
The Indalo and SANParks group make the point that allowing a large-scale industrial development in the national park’s buffer zone will set a dangerous precedent that could threaten all protected areas in the country.

Financial:
The Bayview project has not been shown to be financially viable, and it may not be able to compete with better-resourced wind farms. There is no energy yield assessment business plan in the environmental application, and a high-level independent assessment indicates that the site is marginal.

Even though SANParks made formal objections during the EIR process and Indalo made substantive submissions based on independent studies, the DFEE granted environmental authorisation for a second time on 23 March 2021. It took no notice of the SANParks and Indalo objections. Based on the decision, it seems that the DFFE ignored the objections from private and government conservation and ecotourism operators in the area.

Indalo and the Wilderness Foundation have subsequently launched an appeal with the Minister of Environment, Forestry and Fisheries. They requested the DFFE for access to the documents that informed the authorisation to ascertain why the decision to authorise was given despite the objections. Following various delays, DFFE provided the documentation, following which Indalo put together an appeal which was also distributed to interested and affected parties.

In the appeal, Indalo asks the minister to convene an independent panel to assess the Indalo submissions because they contain detailed, specialist reports. In Indalo’s view, either the minister will see that the Bayview project is fatally flawed, or she will need to constitute a panel to reassess the environmental authorisation.

On 5 July 2021, Bayview sent an appeals response that mostly avoids, or otherwise tries to contradict, the Indalo submission. They stand, and possibly fall, by the following two arguments:

In response to queries by AG, CES furnished no further details other than those in the public record. CES gave the official line that all legal requirements as stipulated by the relevant acts were adhered to, and that all concerns raised were dealt with as legally required.

Indalo thinks that the response does not address the substantive issues of the appeal. The minister is likely to dismiss them and constitute a panel to address the Indalo (and SANParks) concerns.

This is an interesting story to watch. There is no doubt that South Africa needs to move from toxic, fossil-fuel power generation to more renewable sources of electricity. At the same time, the country’s natural heritage is the source of significant tourism revenue and preserves biodiversity crucial to our human future.