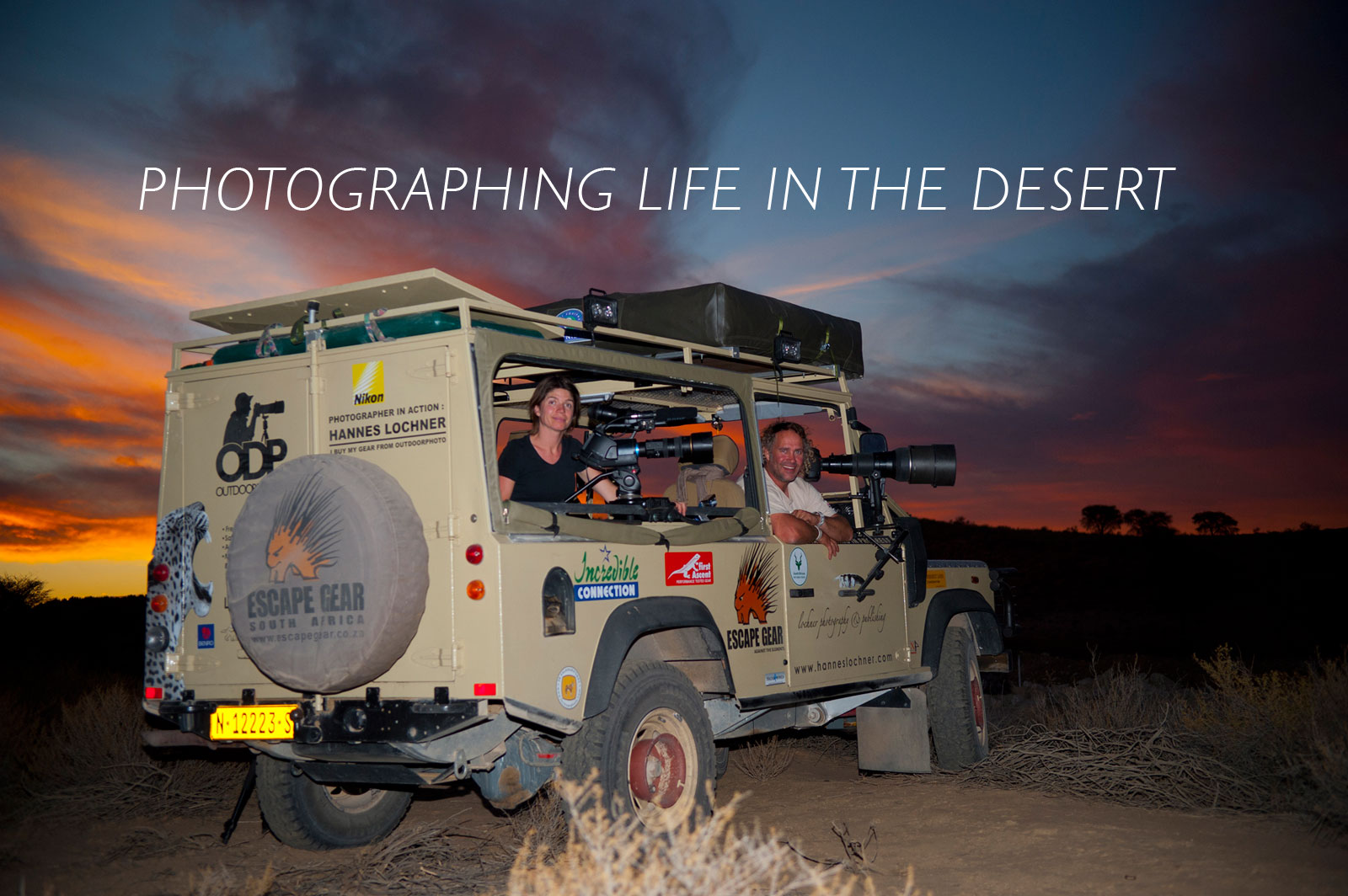 FIVE YEARS IN THE KALAHARI

Open spaces, thousands of antelope and abundant predators are what the Kalahari desert, particularly Kgalagadi Transfrontier Park, is all about. In addition to the quadrupeds, the birdlife is also spectacular. The smell of the first rains, the flowers after the rainy season, the birth of hundreds of springbok and, of course, seeing a big black-maned lion against the backdrop of a red dune. These are just a few features that draw one to this arid landscape, and for photographers this place is hot, sweaty – but with enough patience, heaven on earth.
In 1995 I saw a photograph taken by Chris Johns of a big black-maned lion in a dust storm, and I was immediately hooked on the Kalahari and dreamed of becoming a full time wildlife photographer. This was only realised a decade later, but the memory of that photograph inspires me to uncover more photographic stories in the Kalahari.

Six years ago I grabbed my equipment and tent and headed for this region, but instead of the two years I had planned, I stayed for five. My first project was called ‘Colours of the Kalahari’ for which time I tried to capture the essence of the region. Two and a half years ago, I started on ‘The Dark Side of the Kalahari’, documenting the life of a leopard called Luna, as well as the nightlife that surrounded her.
I adore leopards. Although one has to work hard to find them, the Kgalagadi Transfrontier Park is probably home to the most beautiful specimens. I have spent time at twelve different leopard den sites, watching the little ones grow up and seeing how their different personalities develop. The sad part is seeing cubs getting killed by other predators, but it’s part of a tale played out in nature, and it’s wonderful to see the mother rear her next litter to full adulthood.

Initially I kept to normal National Park gate hours, but during the last two years, while focusing on night photography, I was going out at 4 pm and returning at 10 am. This meant I had to sleep in a hot tent during the day – impossible at around 40°C in the summer shade, so I was always tired. Conversely, the winters get down to -12°C at night which you can’t escape in an open safari vehicle.
Your tent is often surrounded by scorpions and snakes. Hyenas try to eat everything in your camp, even your tyres, and jackals and lions run away with your pots and pans. There’s also the primeval sensation of being stalked by young lions, and tasting almost every bug the kalahari has to offer while photographing with spotlights during the rainy season

When working at night, using a telephoto lens became difficult, so I relied on shorter lenses. I also set up a remote system, attaching cameras in and around my vehicle to capture interesting angles. Lions are always curious and they never let you down, especially the younger ones. When one stops at a pride of youngsters, they always run towards the vehicle and chew on everything, nibbling on the bull-bar and the wheels. Consequently it becomes essential to protect your cameras from such unwanted attention.
During my entire stay I drove 220 000 km and went through 16 tyres. But life in the Kalahari got less lonely after my wildlife filming partner, Noa Köfler, joined me for the last two years, capturing the behind the scenes footage to promote our new app for The Dark Side of the Kalahari. 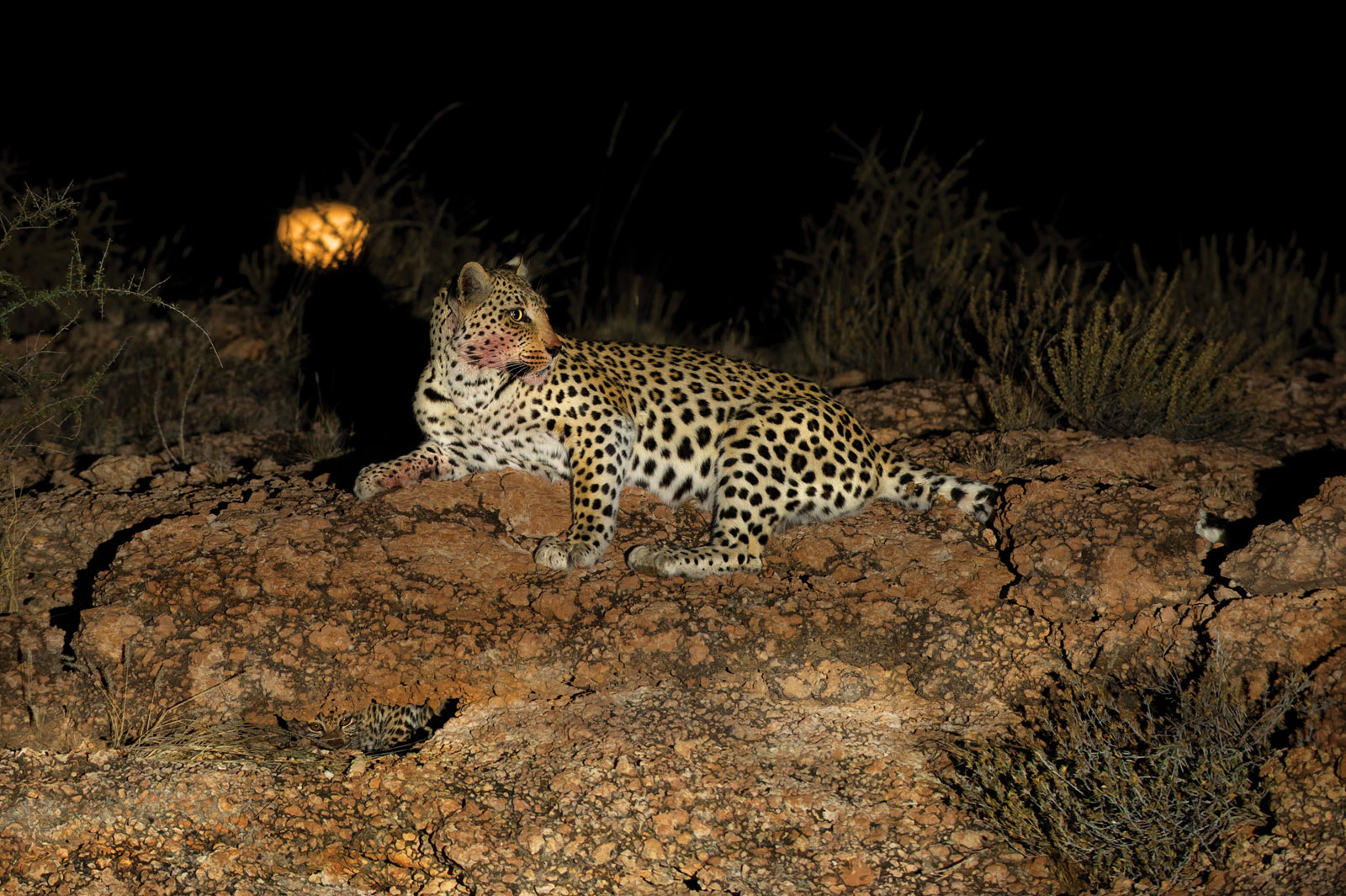 A mother leopard presides over her den. Can you spot her cub? ©Hannes Lochner

The dry period (May to September) is the best season for lots of action. It’s the time everything revolves around the waterholes, where all living things intermingle and, if you are patient, you will get great photographic results. The winter months offer gorgeous sunshine, but the riverbeds are very cold and the predators tend to stay in the dunes where it is warmer.
Ultimately, every living thing is out to survive in this arid landscape and the motto “eat or be eaten” is a stark reality. But this is the reality that makes the Kalahari magical. 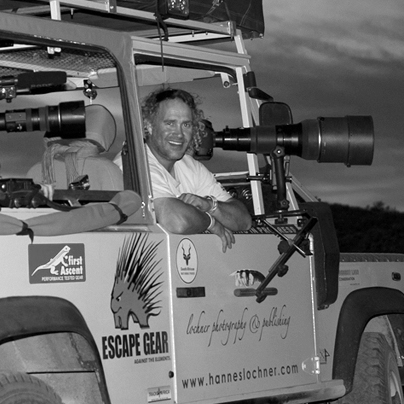 HANNES LOCHNER is a Cape Town born photographer who has become synonymous with the Kalahari, having spent 5 years photographing the bounteous wildlife of this arid region. Before becoming a full time wildlife photographer, Hannes was a graphic designer and travelled the world kayaking her rivers intensely. It was on returning to South Africa that he started his own rafting company, acting as a field guide on the Orange and Kunene Rivers. But his love for the fauna of Africa triumphed and his career as a photographer took off. For more by Hannes check out THE DARK SIDE OF THE KALAHARI. You can view more of Hannes’ work on his website.