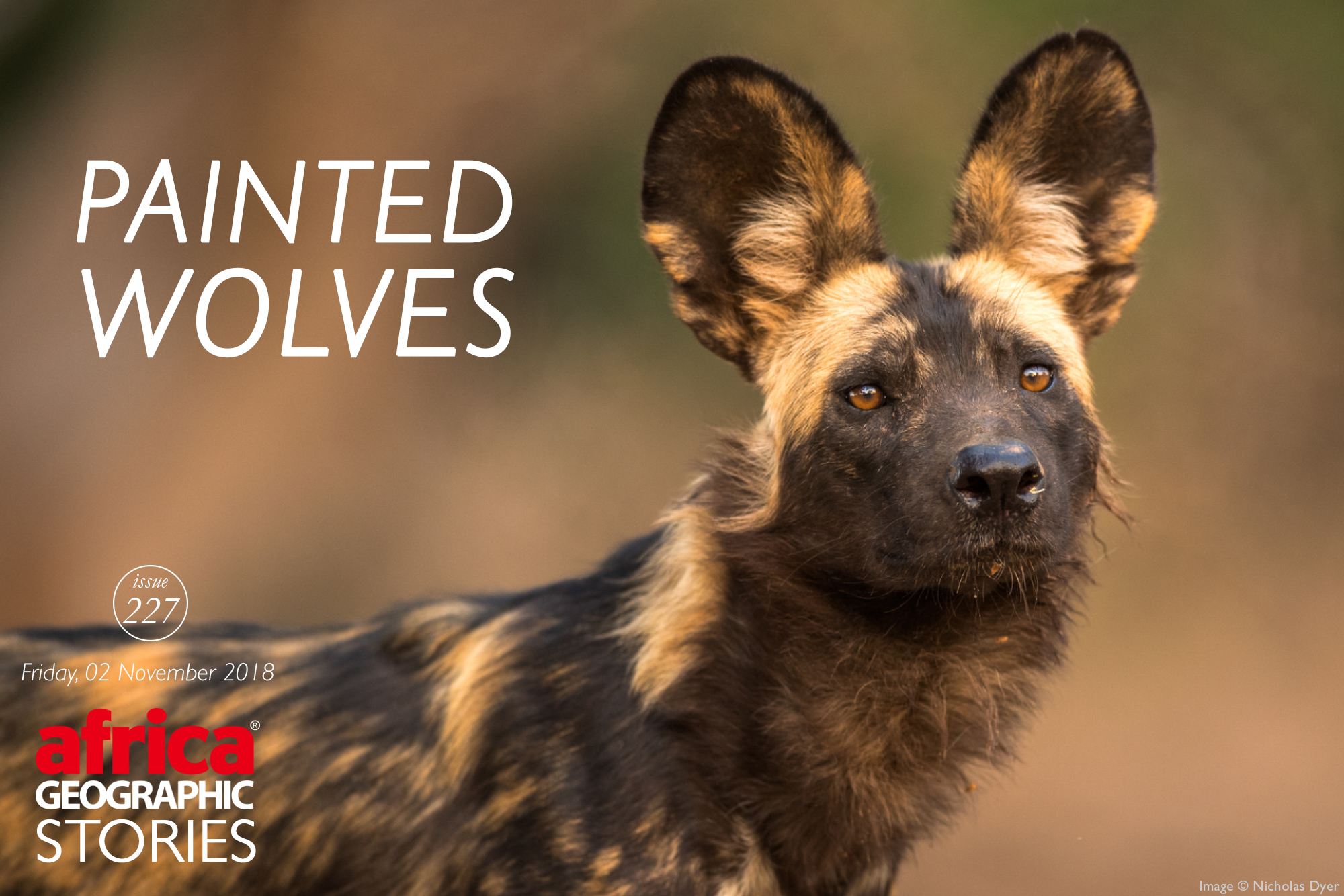 The painted wolf (Lycaon pictus), also known as the African wild dog, is a unique and remarkable creature. On the one hand, it is Africa’s most successful predator. Yet, on the other, it is an incredibly social animal, caring deeply for its family’s wellbeing in a tightly knit pack. Yet for the last 100 years, the painted wolf has endured an outrageous onslaught, which has seen their numbers decrease from 500,000 a century ago to only 6,500 today. This 99% reduction in their population has put the wolf ’s survival on a knife-edge.

Painted Wolves: A Wild Dog’s Life is their story. It is told with insight and passion from two people who know them well – award-winning photographer Nicholas Dyer and renowned conservationist, Peter Blinston, both Painted Wolf Foundation Trustees. 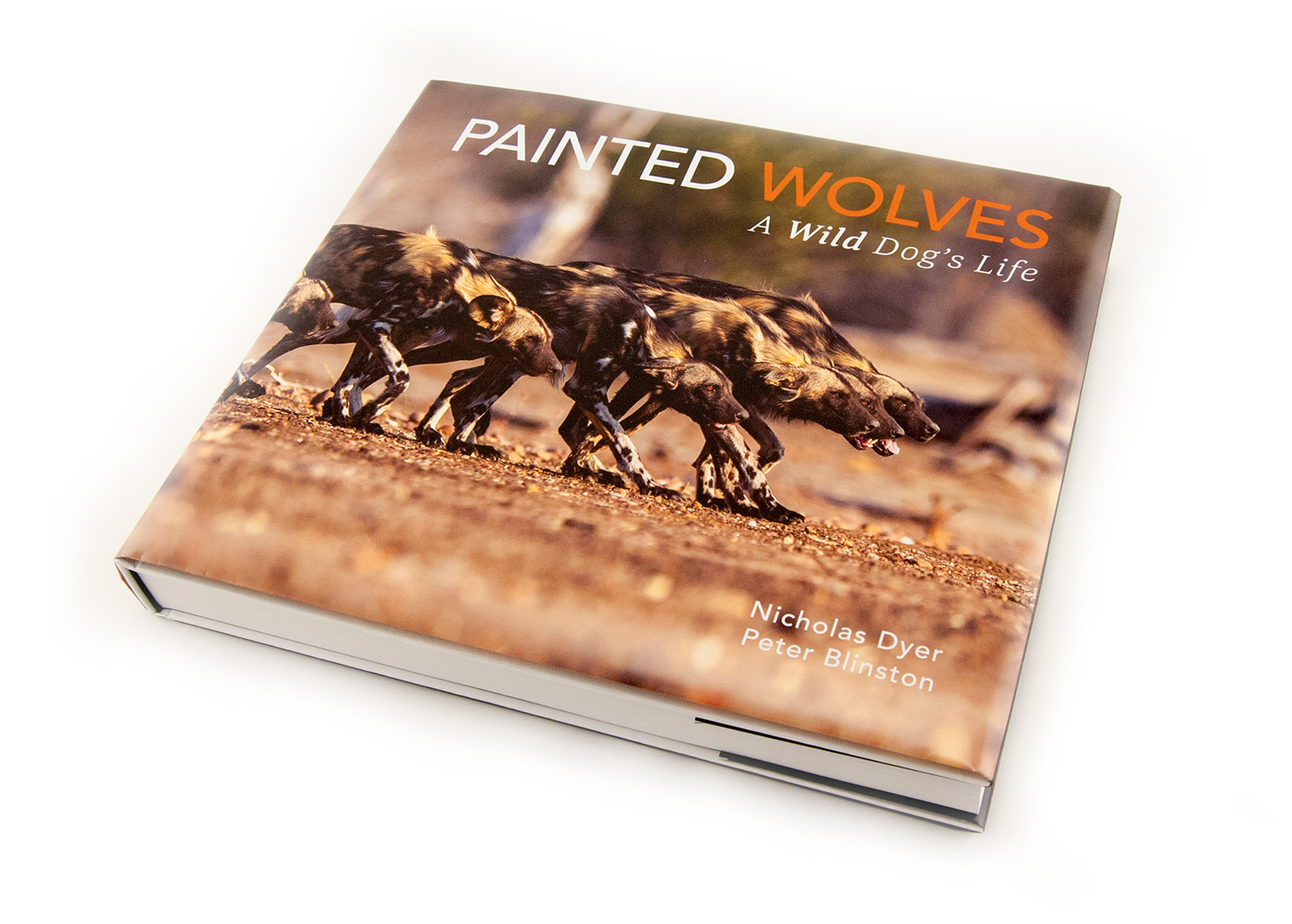 For six years Nicholas Dyer has been tracking and photographing painted wolves on foot in the Zambezi Valley. For twenty years, Peter Blinston has been doing all he can to save the painted wolf from extinction through his organisation Painted Dog Conservation.
In this book, they have come together to tell you what they know and love about this incredible creature, sharing their in-depth knowledge and unique experiences.

The book is illustrated with more than 220 stunning images. Each photograph tells a story in its own right and brings alive the captivating and mysterious world of the painted wolves and the lives of those around them.
In this gallery, we are sharing just a small selection of the stunning painted wolf photos that feature in the book. You can order your copy of the book here, and all profits from the sale of this book will be donated to the Painted Wolf Foundation. 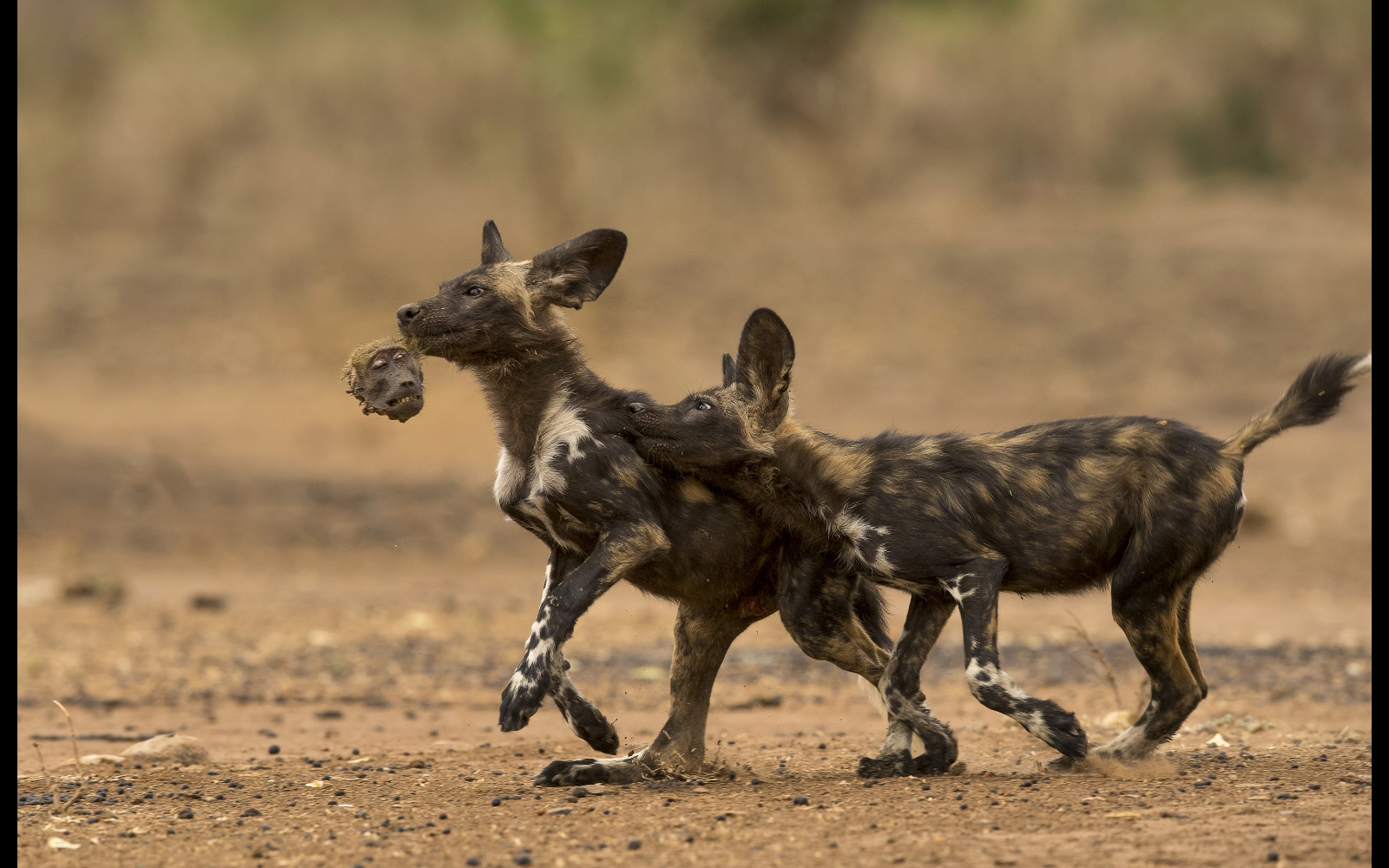 📷  A pair of painted wolf pups play a macabre game of tag with the head of a baboon – the remains of their breakfast. This photo, ‘Ahead of the Game’, was awarded Highly Commended in the 2018 Wildlife Photographer of the Year awards. © Nicholas Dyer 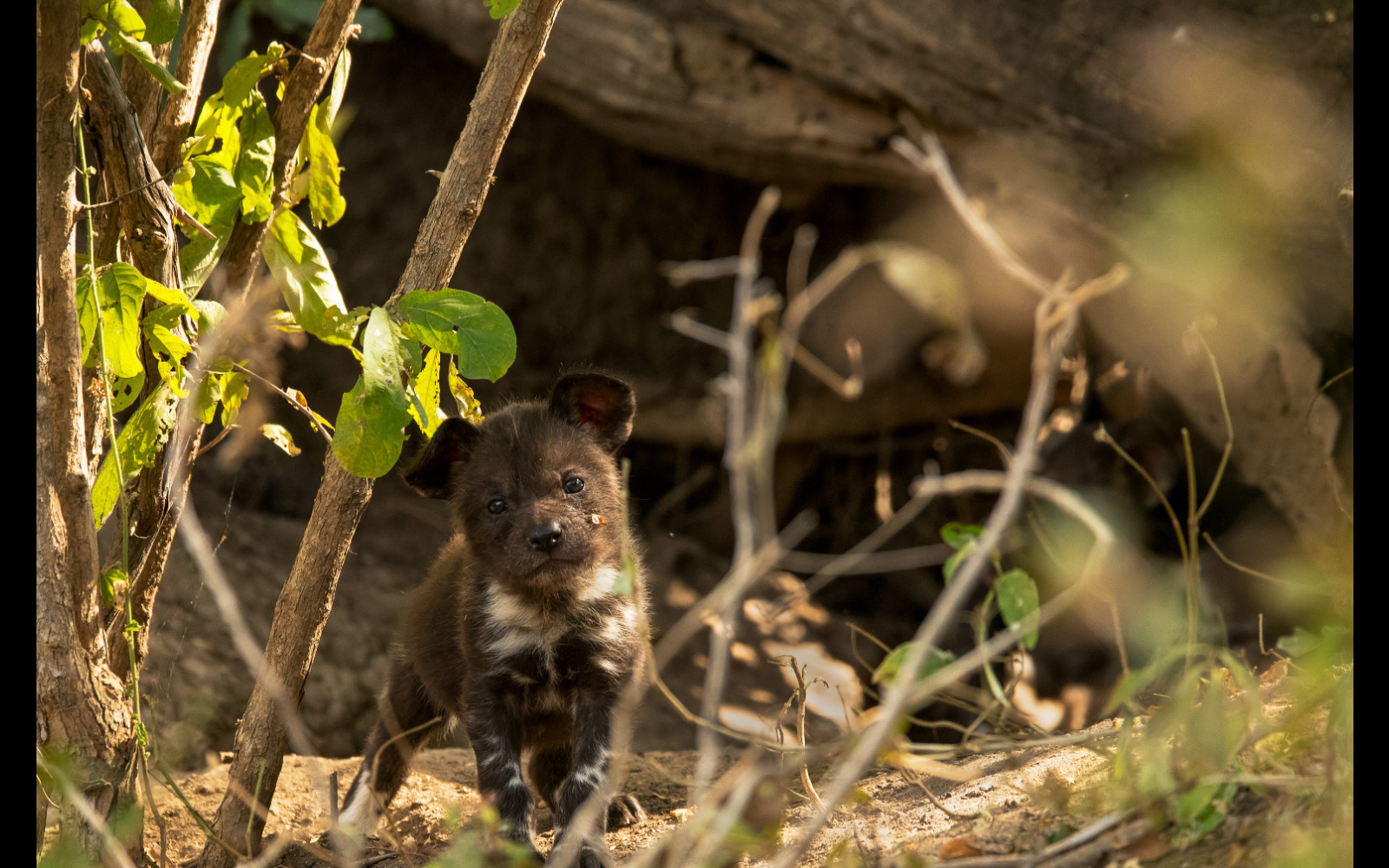 📷  Painted wolf litter sizes can be quite variable but average around ten pups. Pups weigh about 300 grams each. They stay in the den for three months, moving from milk to meat by the age of eight weeks. After leaving the den, they only join the pack as full-fledged hunters at 12 months. © Nicholas Dyer 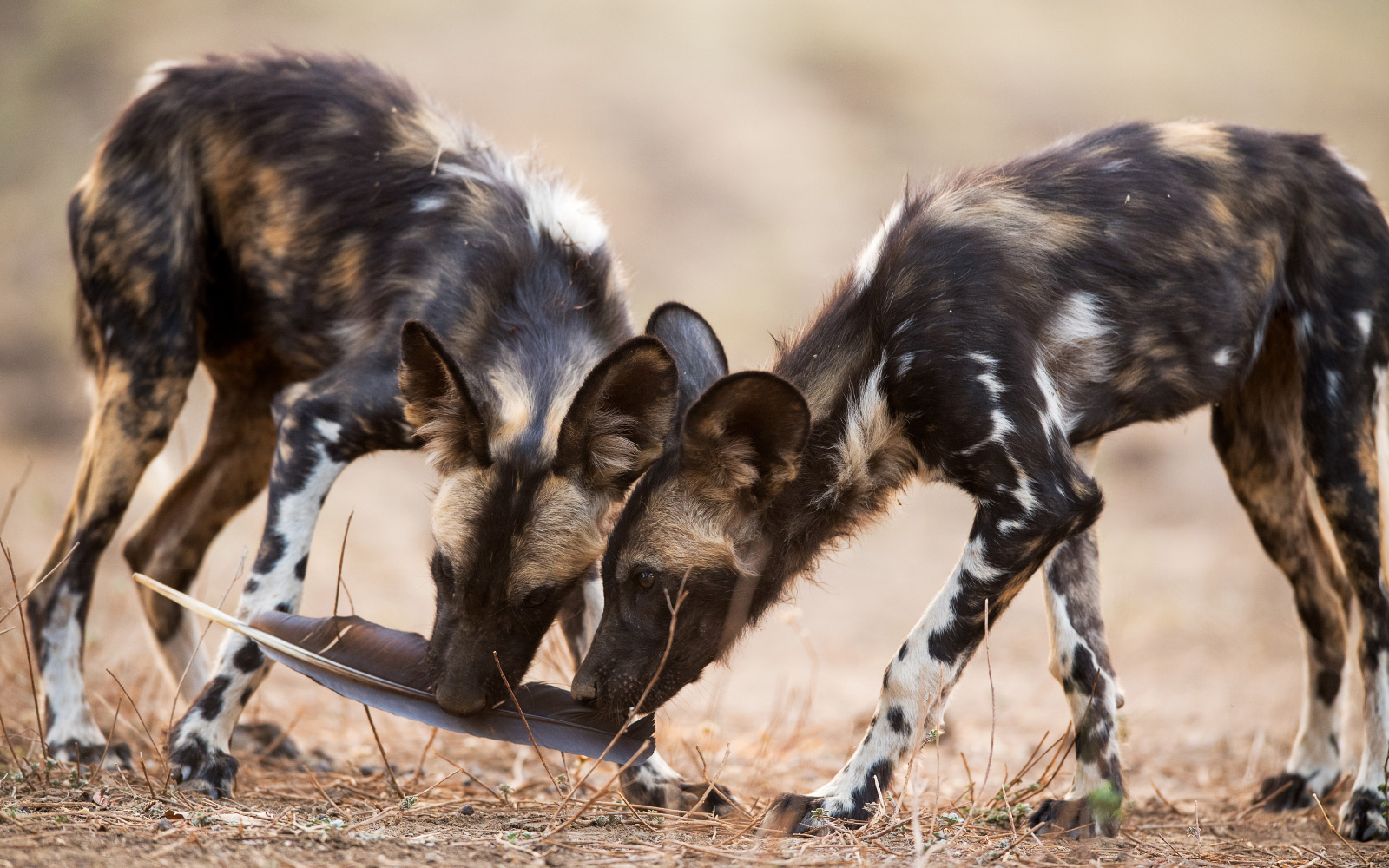 📷  Every painted wolf has a unique pattern, although most have a distinctive white flash at the tip of their bushy tail. Painted wolves in north-east and east Africa have darker patterns, while in southern Africa the coats are more lightly coloured. © Nicholas Dyer 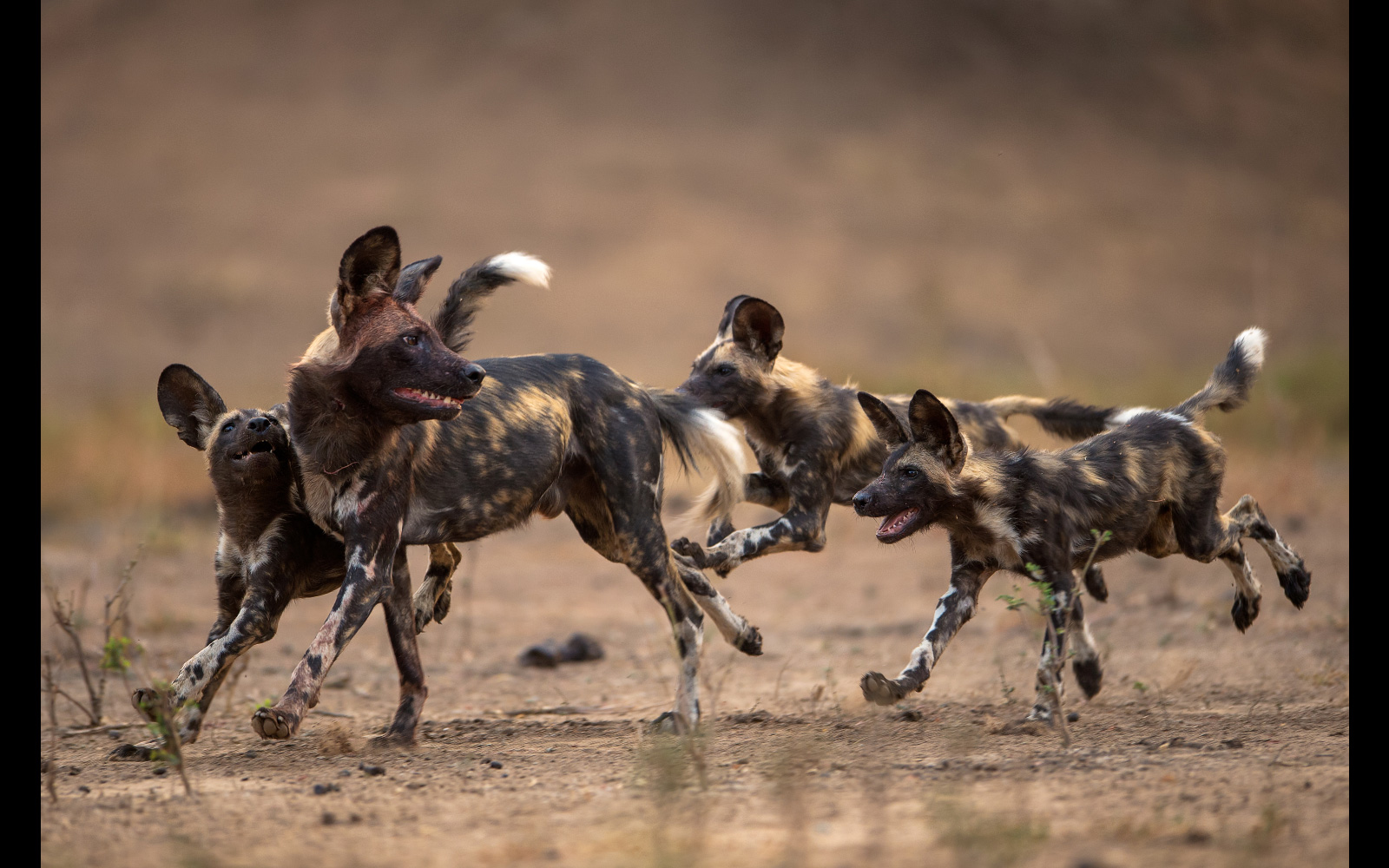 📷  This hugely social species spend a significant amount of time playing, especially with the pups, who seem to take a long time to grow up! © Nicholas Dyer 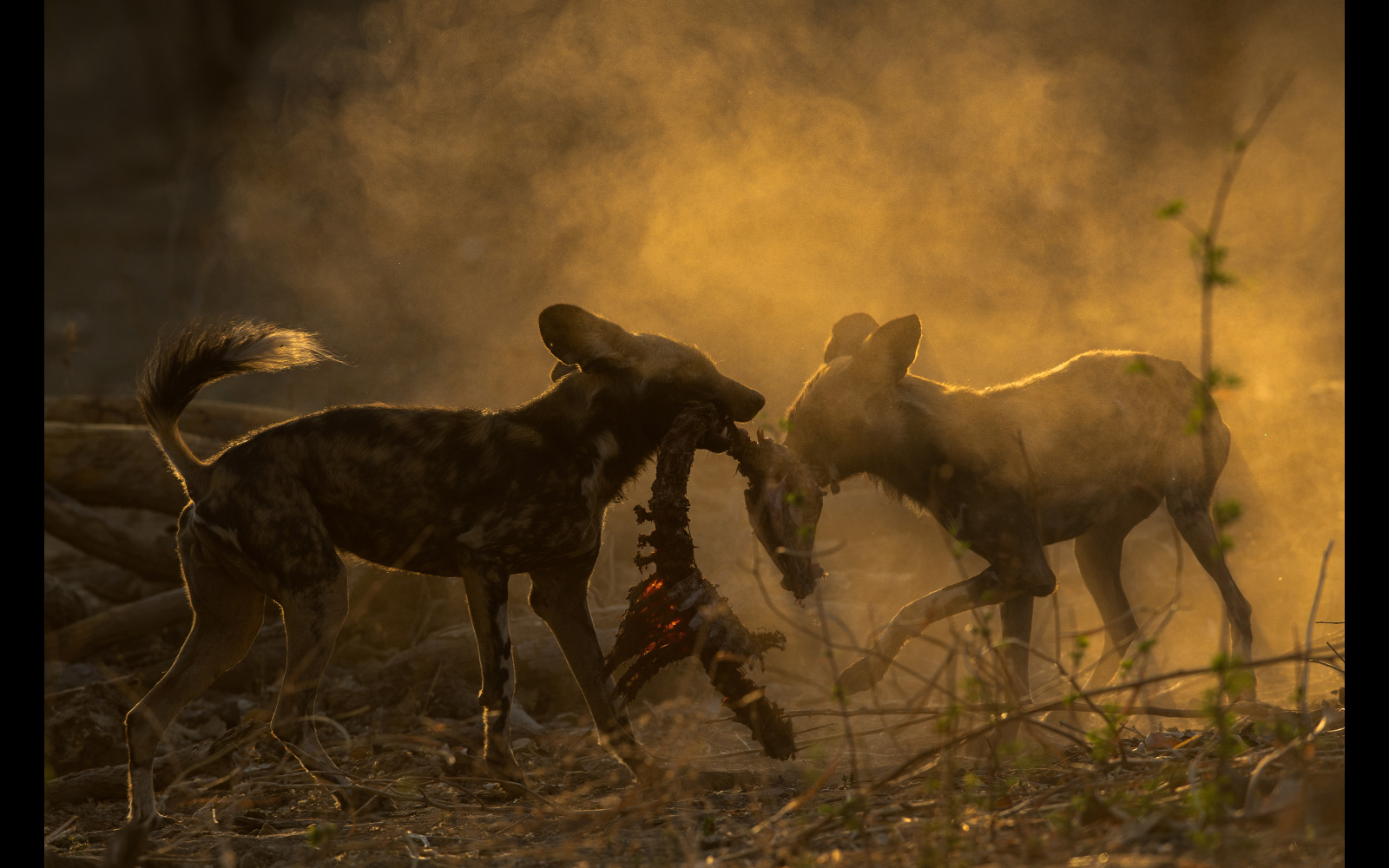 📷  When one of the pack is ill or injured, the painted wolves rally around to care for the sick animal, regurgitating meat after a hunt, or even licking the wound to keep it clean. Here, one shares a carcass with his wounded brother. © Nicholas Dyer 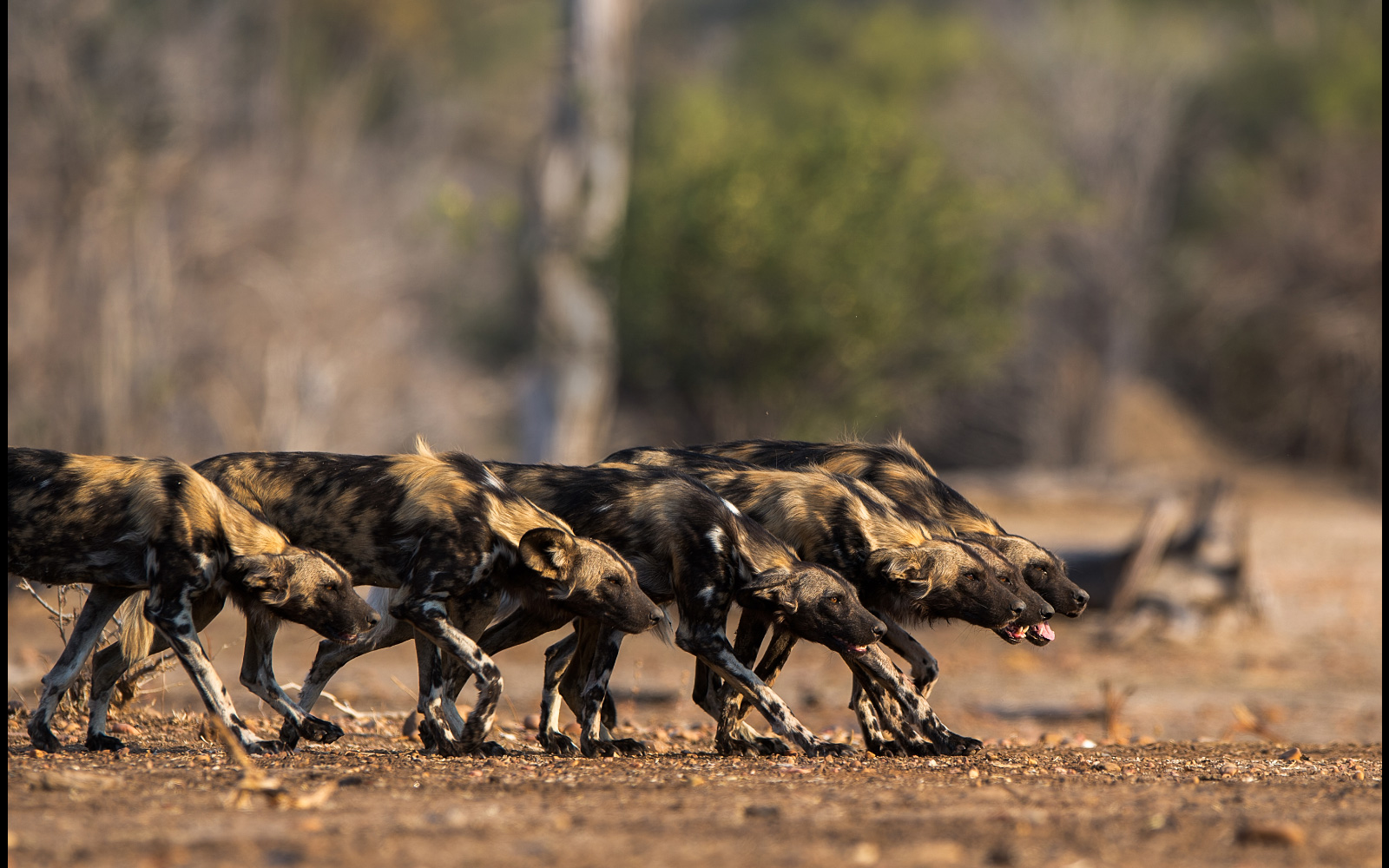 📷  “Wild dogs are among the world’s most successful predators. Before the chase, the dogs often move in a single file together, heads down, backs straight and ears pricked; they are serious, focused and energised. These dogs are part of the Vundu Pack in Mana Pools. While this picture captures their hunting pose, the reality here is that they had just woken up after a day in the blistering sun and were excitedly moving to wake the pups who were still sleeping. Despite their menacing look, all they wanted to do next was to play with their pups in an expression of boundless joy.” ~ Nicholas Dyer © Nicholas Dyer 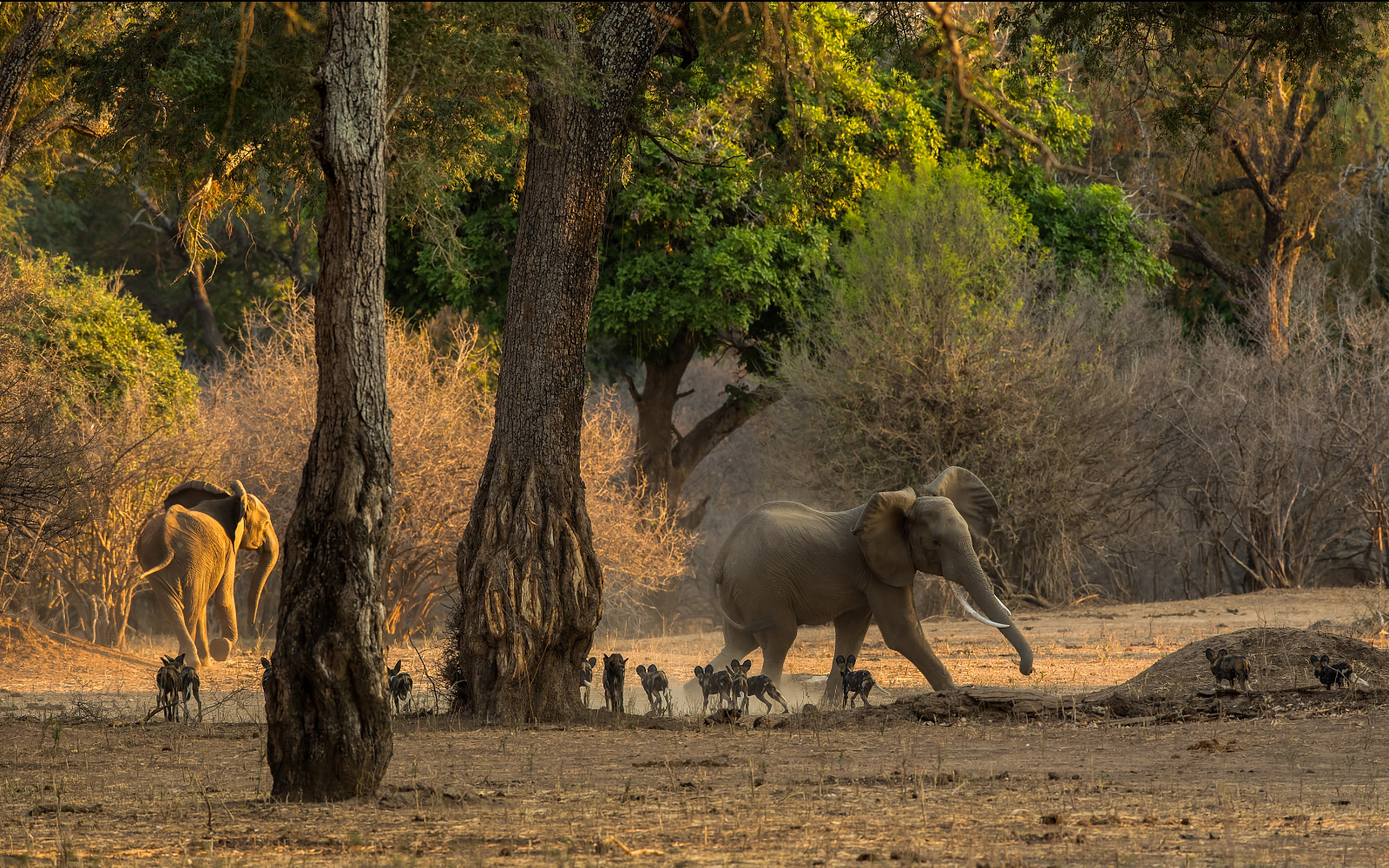 📷  The pack disturbs a herd of elephants in Mana Pools. © Nicholas Dyer 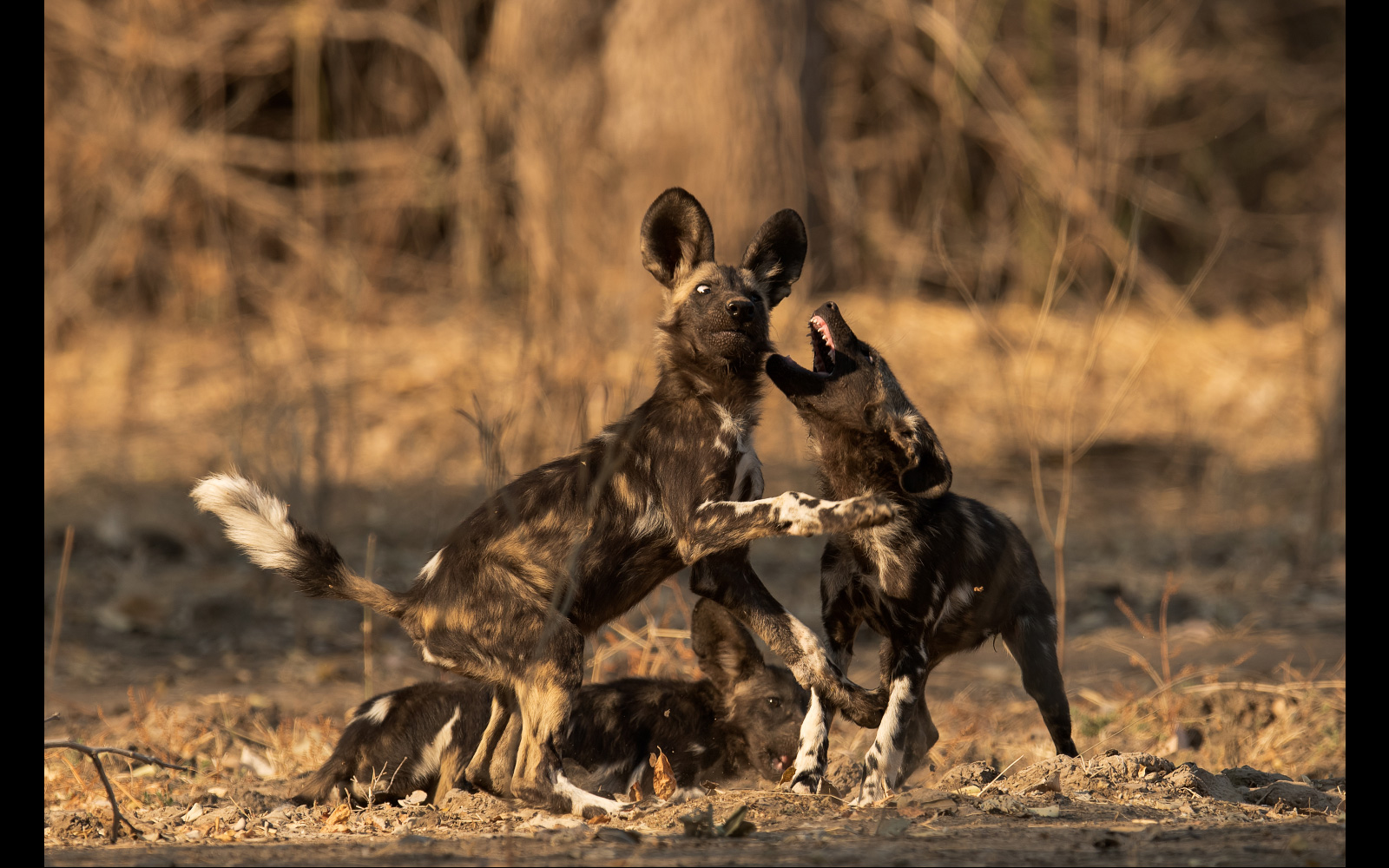 📷  While playing, a painted wolf pup realises that her brother is growing up… and so are his teeth. © Nicholas Dyer 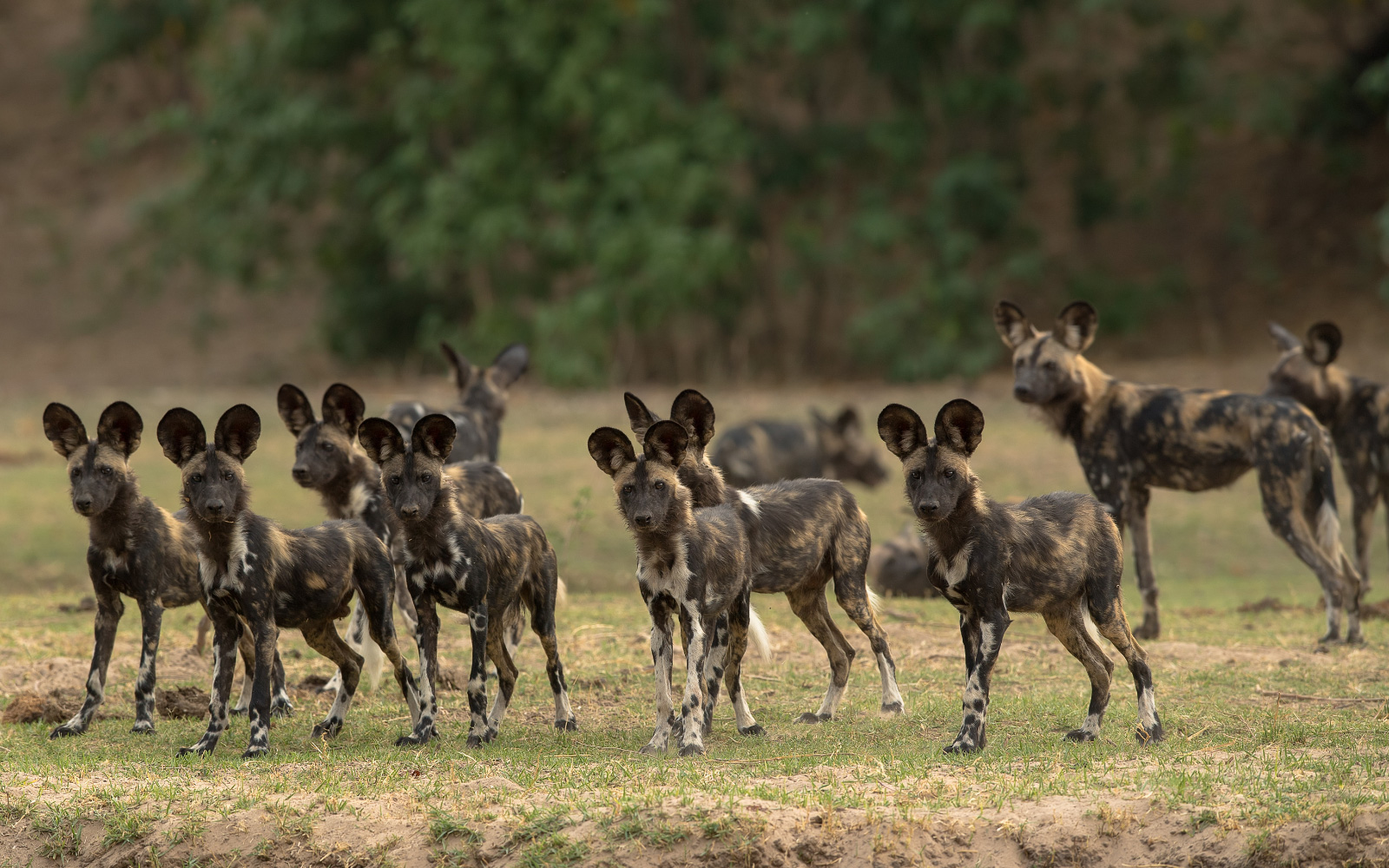 📷  Painted wolves live in a pack, led by an alpha female. Pack size ranges from just two to over 30, but somewhere in the range of ten is most common. Packs usually need at least four to six members to successfully raise their pups. Same-sex groups disperse from their natal pack around the age of two and hopefully meet up with another dispersal group (of the opposite sex!) to form a new pack. © Nicholas Dyer 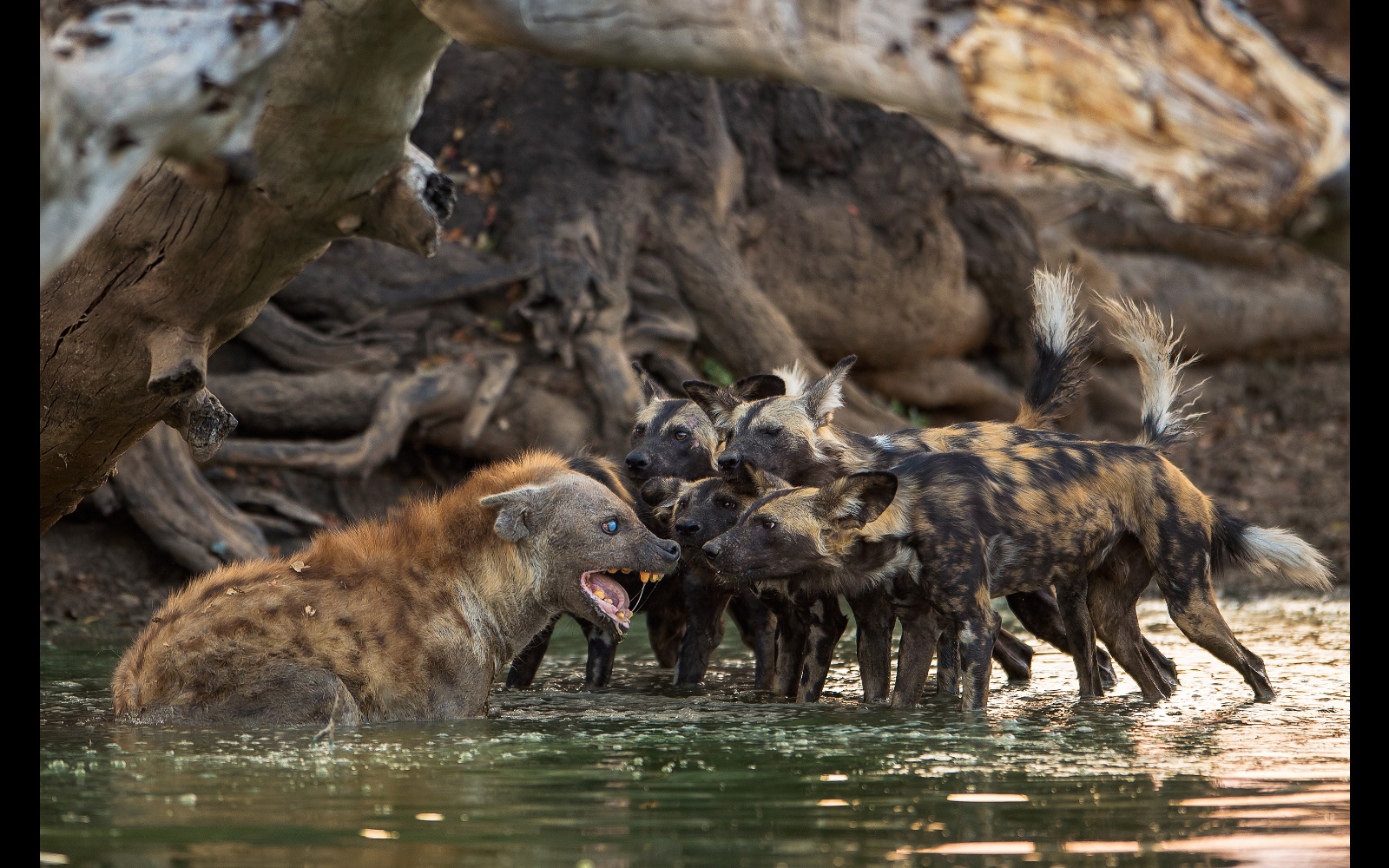 📷  Painted wolves are continually competing with lions and hyenas, who often try to steal kills and, sometimes, even kill the painted wolves. © Nicholas Dyer 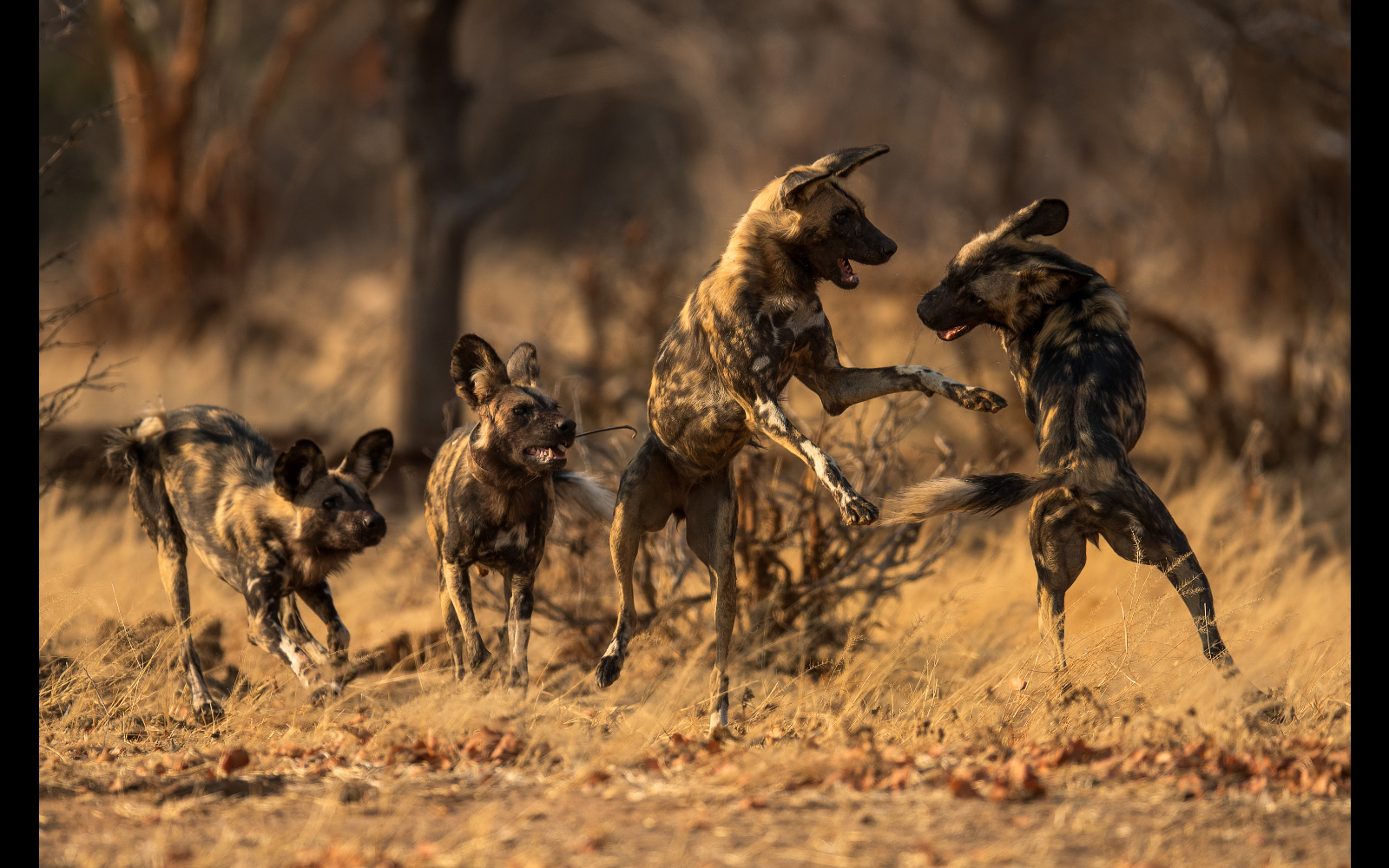 📷  Before the pack goes on the hunt, they perform a joyous ‘greeting ceremony’. Even though they have been sleeping next to each other all day or all night, their enthusiasm in this pre-hunt ritual is incredible to watch. © Nicholas Dyer 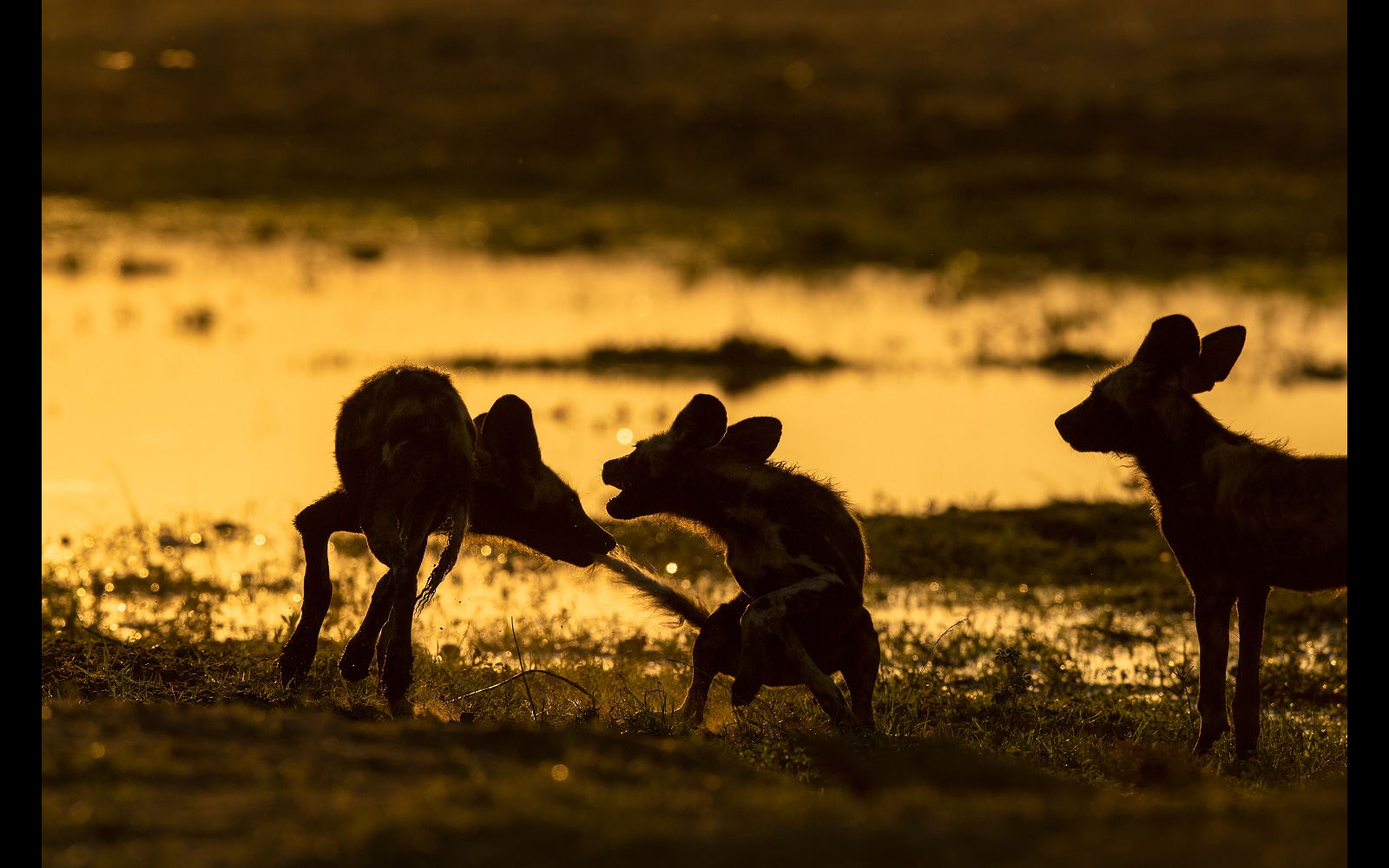 📷  Except for the three months when they are denning, painted wolves are the nomads of the African bush, moving widely within an extensive home range. © Nicholas Dyer 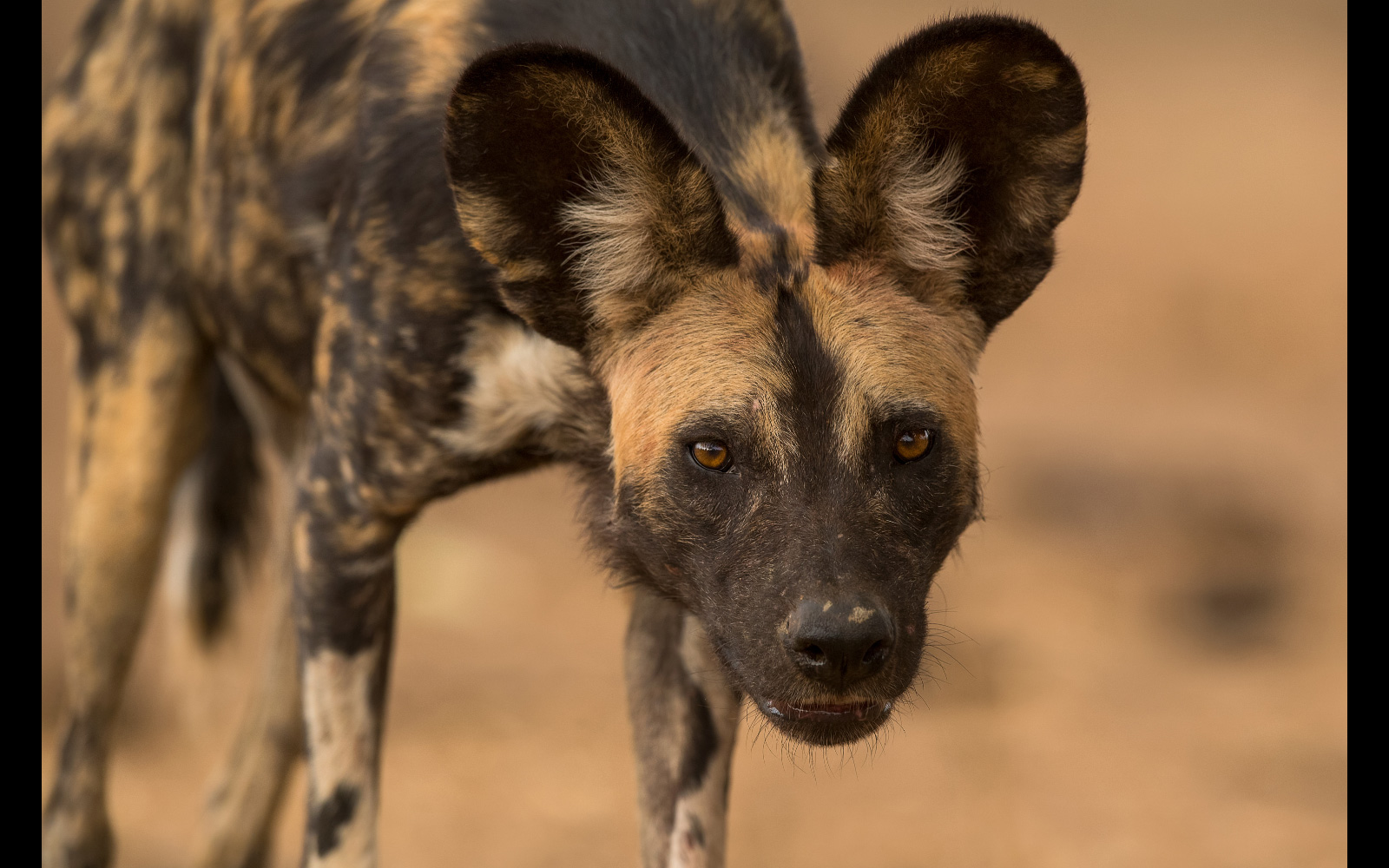 📷  The Latin name for the painted wolf is Lycaon pictus, translating literally to ‘painted wolf-like creature’. The species is known by a multitude of names, including ‘wild dog’, ‘painted dog’ and ‘African hunting dog’. And those are just the English ones! Whatever the name you choose to use, this is a species deserving of our respect and attention. © Nicholas Dyer