Posted on February 27, 2019 by Guest Contributor in the Opinion Editorial post series. 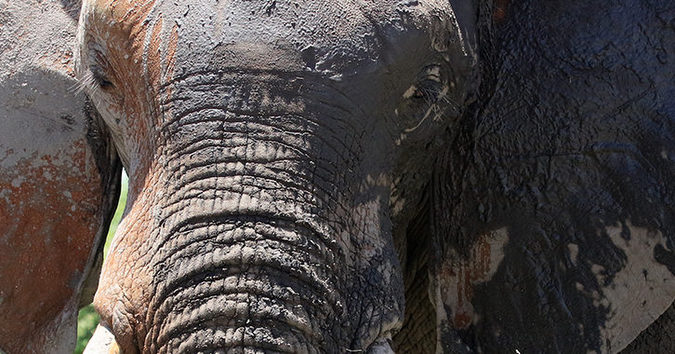 On the 7 January 2019, I submitted Elephants Without Borders (EWB) survey report titled ‘2018 Aerial Survey of Elephants and Wildlife in Northern Botswana’ to the Department of Wildlife and National Parks (DWNP) for their review. I wish to state categorically that, apart from having the survey peer-reviewed by eminent scientists, EWB has not released this survey report.

Prior to submitting it to the Government of Botswana (GoB), the report was extensively peer-reviewed, verified and validated by some of the world’s foremost authorities on elephant conservation and wildlife aerial surveys. Many of these reviewers were or are members of the IUCN African Elephant Specialist Group. I took great care in consulting with elephant biologists who have undeniable qualifications. I can, therefore, confirm that this report has not been released by me to ‘second guessers’ or anyone else not qualified to review a report of this scientific subject matter.

In September 2018, the BBC reported that Elephants Without Borders (EWB) counted 87 poached elephant carcasses while flying our aerial the survey in northern Botswana. The news went viral and a misinformation campaign ensued. At the time, because I remained committed to completing the survey and determining the extent of elephant poaching, I did not respond to the unsubstantiated conspiracy theories which dismissed my genuine concern about what the survey revealed – an increase in elephant poaching. The information I shared was true and verifiable and has since been complemented by additional data.

To date, I have not given a response to the unfounded claims levelled against me and my supporters. Let me state at the onset – we observed dozens of poached elephants – ‘close to the Okavango Delta wildlife sanctuary’. To make sure we had this correct, I chartered a helicopter and visited elephant carcasses to determine their cause of death. Carcasses were verified by both ground and low altitude assessments. I did not have the resources to visit every recently killed carcass seen on the survey, but of the over 100 carcasses of concern, 90% were confirmed as poached.

I reported these criminal acts to the appropriate authorities on a case-by-case basis almost immediately, as they were sighted, and long before any articles appeared in any media. In total, I submitted 16 incident reports to the authorities, following standard procedures that EWB has followed on all previous surveys. These reports included photographic evidence and GPS locations of all suspicious dead elephants and suspected poachers’ camps.

It is worth noting that public discussion about my concern for elephant poaching is often focused on secondary issues (political, donor, policy and contractual) instead of addressing my call to acknowledge and deal with a potentially serious problem. This is unfortunate because my purpose in reporting to the GoB and subsequently Batswana journalists was to inform them of an escalation in criminal activity.

I was accused by some of being a “traitor” and “liar”, whilst some thought I should be banished back “to where I came from”, and others still thought it better if I was “killed”. My figures were immediately refuted, and labelled “fake news”.

As an Honourary Wildlife Officer, elephant ecologist, professional guide and concerned citizen, I have a duty to report sinister activities in our National Parks and wilderness areas. Critics created a devastating echo chamber of spiced-up allegations by simply repeating other’s unsubstantiated accusations against me.

Our detailed technical report shows that the weight of evidence is indisputable and supports our warning that elephants are being killed by poachers at worrisome levels in four poaching hotspots near a world-renowned ‘wildlife sanctuary’ where gangs of poachers are operating.

In response to the original BBC article highlighting my poaching reports, in October 2018, the BBC were invited to Botswana by the GoB, to film and report on any evidence of alleged elephant poaching. On the 8 January 2019, with full press accreditation from the Office of the President, the BBC came to film their story (Full press accreditation below). 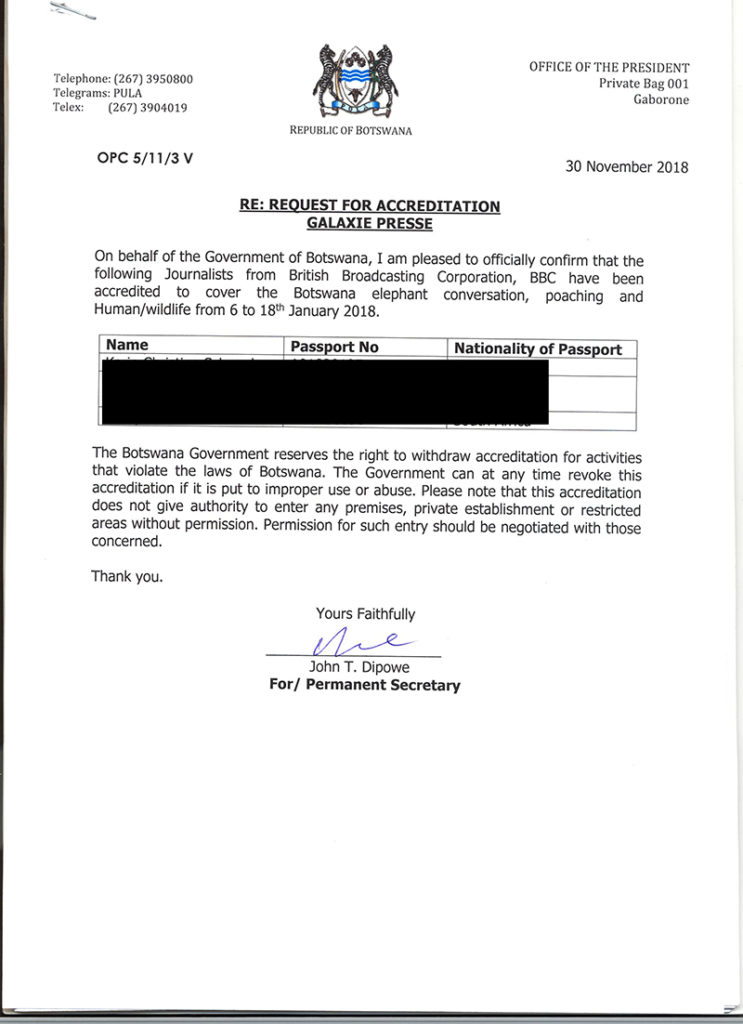 On the 10 January, I received a letter from GoB regarding EWB’s Survey Report which states: “no person or organisation shall be authorised to either disseminate, discuss its contents let alone anything related thereto”. Ironically, this stipulation contradicted the very permission already provided to the BBC by the relevant authorities. Furthermore, such a demand has never been imposed on any previous survey reports or publications.

I wish to clarify that EWB was not under contract to the GoB, and no taxpayer’s money was used to pay for this survey. EWB did not ‘tender’ for this work. The aerial survey was funded by both EWB and the Conservation Trust Fund (CTF). CTF is administered by an independent board of trustees who voted in favour of awarding a grant to EWB. CTF is specifically mandated by the Convention on International Trade in Endangered Species (CITES) to use CTF funds explicitly for elephant conservation. As with previous aerial survey collaborations between EWB and DWNP, the survey team included a DWNP observer.

Despite widespread decreases in African elephant populations in the last three decades, Botswana has, until now, been the exception – where elephants have been safe with low levels of poaching for ivory. Strong law enforcement policies, good governance and the political commitment of conservation-minded leaders kept Botswana’s elephant population secure and stable.

Elsewhere in Africa, the initial reaction of authorities to elephant poaching has been to deny reports of increasing incidents, refute census results or block reports from being published. Such denials have proven disastrous as levels of poaching that initially seemed no more than a nuisance rapidly escalated into population collapses for elephants. Thankfully, openness is becoming more common. Earlier this month the South African government announced that poaching in Kruger National Park has reached a recent high, with 71 elephants killed for their ivory in 2018.

My motive in speaking now is to refute falsehoods and aspersions levelled at both the scientific data and my credentials, to honour those people who have spoken supportively on my behalf, and most importantly to provide what I believe is vital information for Batswana. I hope that by being informed, the people will be motivated to take the necessary action to stop poaching before it gets worse. We cannot solve problems if we don’t acknowledge them.

In ending my personal statement, I ask for a calm discussion on elephant conservation issues, without animosity or personal attacks, in order to reach agreement on the necessary actions needed to ensure successful ongoing elephant conservation. Elephant poaching in Botswana is happening on the scale I proclaim. By continually denying the extent of poaching, we might be undermining international support.

I believe that in avoiding transparency, we could be exposed to a potential threat that can adversely affect our tourism, our economy, our international reputation as a country that is the conservation flagship of Africa, as well as the rule of law. I have dedicated my life’s work to conservation in Botswana, the country of my birth, and I will continue my life and my work as a dedicated elephant conservationist, researcher and academic.

On the 7th January 2019, Elephants Without Borders (EWB) submitted a comprehensive technical report on the 2018 aerial survey of elephants and wildlife in northern Botswana to the Department of Wildlife and National Parks (DWNP). Prior to submitting this report to the Government of Botswana (GoB), EWB had the report extensively peer-reviewed, verified and validated by some of the world’s foremost authorities on elephant conservation and wildlife aerial surveys.

Reviewers stated the reports “conclusions are robust, and indisputable” another said, “this is a very thorough and carefully documented report demonstrating exceptionally high rigor”. The survey and report are the most comprehensive and efficient study of elephant numbers ever undertaken in northern Botswana.