Not just any walk in the park: 160 kilometres through Zambia’s Kafue National Park 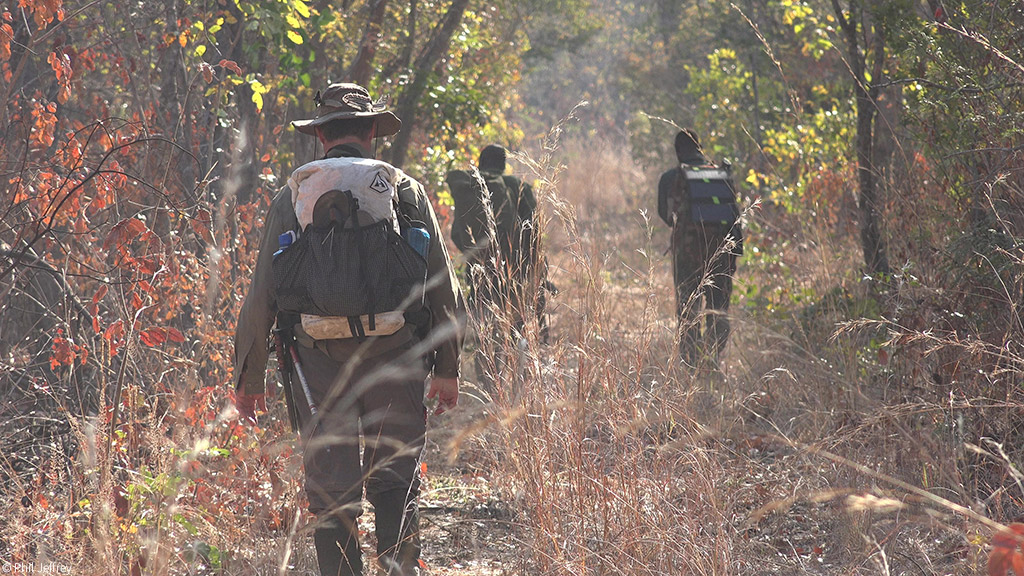 Hand over hand we crawled up the jagged rocks of Mutumbe, determined to summit the highest point in Zambia’s Kafue National Park before dark.  We had started our climb on a gentle slope but quickly found ourselves scrambling over boulders and sharp rocks with our skin soaked in sweat. No one we knew had ever attempted the climb. Now we understood why.

With steep-sided iron ore ridges, Mutumbwe rises 300 meters above the surrounding plains, looking from above like a knife’s edge slicing through the terrain. Cresting a vantage point, we realized we were merely climbing a large cliff rather than a route to the top; Mutumbwe’s perilous summit would elude us that day. Instead, we sat back, cooled off, and drank in the consolation prize: a 360-degree view of an African wonder.

It was August, the end of the chilly Zambian winter.  Hours before, with our backpacks loaded in the back of a truck, we had bounced down a dirt road toward the eastern end of Kafue, the sun rising in front of us. We stopped to pick up Lipoko and Yuram, our Zambia Department of National Parks and Wildlife anti-poaching rangers, guides and protection for the next few days. Arriving at our kick-off point, we hoisted our gear, filled our water bottles, and took our first steps into this vast wilderness.

At almost 100 years old, Kafue is one of Africa’s oldest and largest parks, and at 24,400 km² (2,400,000 hectares), is as big as some countries. Kafue’s stunning beauty includes miombo-woodland covered hills, thick savanna grasslands, extensive marshes, and sinuous evergreen forests guarding the banks of the Kafue River. And yet the grandeur can distract you: Kafue is a park in danger.

For myself, a life-long outdoorsman and conservationist, and for Phil Jeffrey, an experienced Zambian wildlife guide and the co-owner of Musekese Conservation, this was more than just a walk in the park. We were on a 160km journey-for-a-cause through Kafue’s little traversed northeastern tier. Our mission: to boost public awareness of the emergency created by poaching and encroachment on a vast array of wildlife.

Naturally, we set out for the adventure too, but the real motivation was to raise badly needed money for ‘Saving Kafue National Park One Step At A Time’ (www.savingkafue.com) – our effort to strengthen wildlife conservation in the park.

The next day, after an early start, to avoid the heat, we soon saw signs of bushpig, warthog, aardvark, elephant, and various antelope.  Following a lone elephant bull’s trail, we pushed our way through 2m-high grass that gradually transitioned to miombo woodland.

As the days passed, we saw signs of illegal activity: trees downed for honey harvesting, snares, empty poachers’ camps, bicycle tracks, and a broad, well-used foot trail that originated beyond the park’s eastern boundary. A three-legged hyena, an injured zebra, and the skeletal remains of a sable antelope with a snare around its horns confirmed our suspicions. Further on, we found a recently poached elephant and the skeletons of two other pachyderms that Lipoko and Yuram estimated were killed sometime in the past two years.

Musekese Conservation is collaborating with National Parks to mitigate the effects of increased poaching and human encroachment pressure on Kafue National Park. Musekese recently built an anti-poaching unit that comfortably houses 12 rangers and supervisors, and has a first-in-Kafue central communication centre to facilitate faster scout communication and coordination during emerging situations.

On day four, moving along the Kafue River, we saw a python, at least 4 meters long and 20-25 centimetres wide, with a swollen belly two to three times the girth of the rest of its body – probably filled with a bushbuck or other small animal. While digesting, this impressive snake was resting safely under thick bush close to the river. Being careful not to scare the python and cause it to regurgitate its food and flee, we watched quietly from a safe distance.

Our walk took us to traditional, hand-made community fishing weirs, permitted by the original park agreement with the indigenous tribes. These effective weirs are wood and thatch dams spanning the Lafupa River, routing water to trap fish into baskets made from reeds that grow along the banks of the Kafue.  One at a time, we picked our way across the rickety structures, keeping a wary eye out for nearby hippos and crocodiles. We celebrated a successful crossing with a restful night in Busanga Plains – an area in the far north of the park with extraordinary beauty and abundance of wildlife due to the lush vegetation created when the Lufupa River overflows into the adjacent plains.  The Busanga Plains is a park highlight for the diversity and quantity of big game.

On our last night, we made camp near an old river channel on a raised clearing area next to a large termite mound, shielding us from animals on one side. Exhausted, we lay in our sleeping bags watching the constellations roll by. Nearby, a leopard growled, elephants grumbled, and hippos splashed and grunted as they marked their territories and socialized. Early the next morning, I woke to a hyena whooping not thirty meters away.

Late on the eighth and final day, still in the Basunga Plains, we arrived at our endpoint. Tired, with sore feet, and weighing a few kilograms less, we dropped our packs and celebrated. We had just walked 160 km across Kafue National Park!

After being isolated and disconnected from our techno-existence, methodically placing one step at a time and listening to nature’s entertainment around me, I was reminded that to truly experience life, you have live it. Soul-awakening moments happen when your heart races, you taste the dust and sweat after a long day in the bush, and sit in darkness, a bit of fear encased in awe, listening to the distant roar of a lion, knowing that you are part of its world.