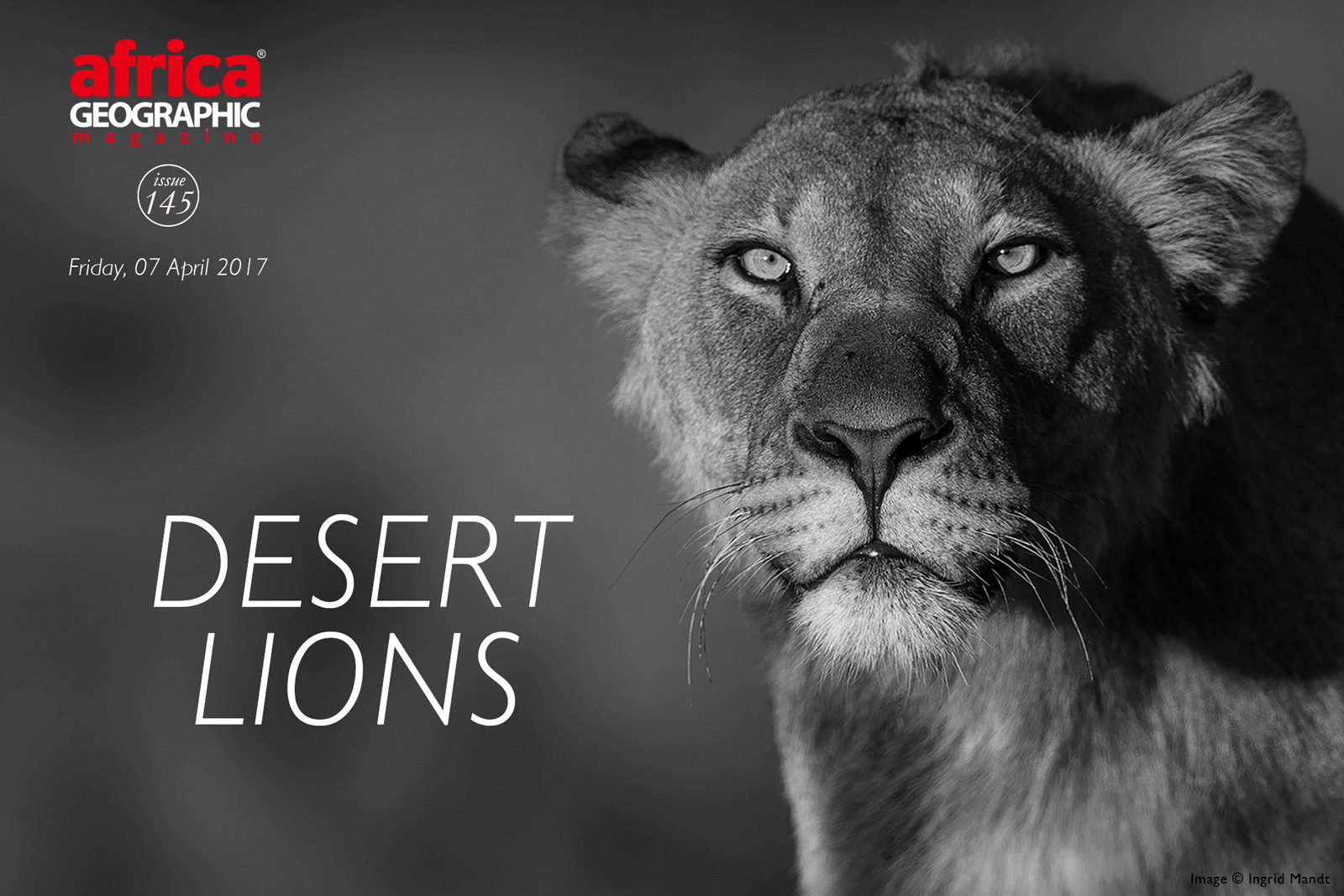 There are records of lions inhabiting the northern Namib desert along the Skeleton Coast in Namibia as far back as 1934. It was observed that desert lions were common in the coastal regions, mountains and rivers, between the lower Kuiseb River and the Kunene River. It was believed that they were plentiful in the Kaokoveld and along the Kunene valley. The Skeleton Coast National Park was proclaimed in 1967, and since then, they have been put on the map as an iconic species of this unique desert region.
However, today their population is under threat from human influence and human-lion conflict is the primary factor holding them back from truly thriving in their natural habitat.
Thankfully, there are good people behind-the-scenes fighting to ensure the survival of this magnificent, resilient species. Photographer Ingrid Mandt has been photographing the desert creatures of Namibia for 25 years, and here she provides us with a stunning portfolio of the iconic desert lions of Namibia. This gallery is an inspirational visual account of the resilience and highly adaptive nature of an iconic species facing real survival challenges, and we hope that these photographs move and inspire you to treasure the beauty and strength of one of Africa’s wildest species. 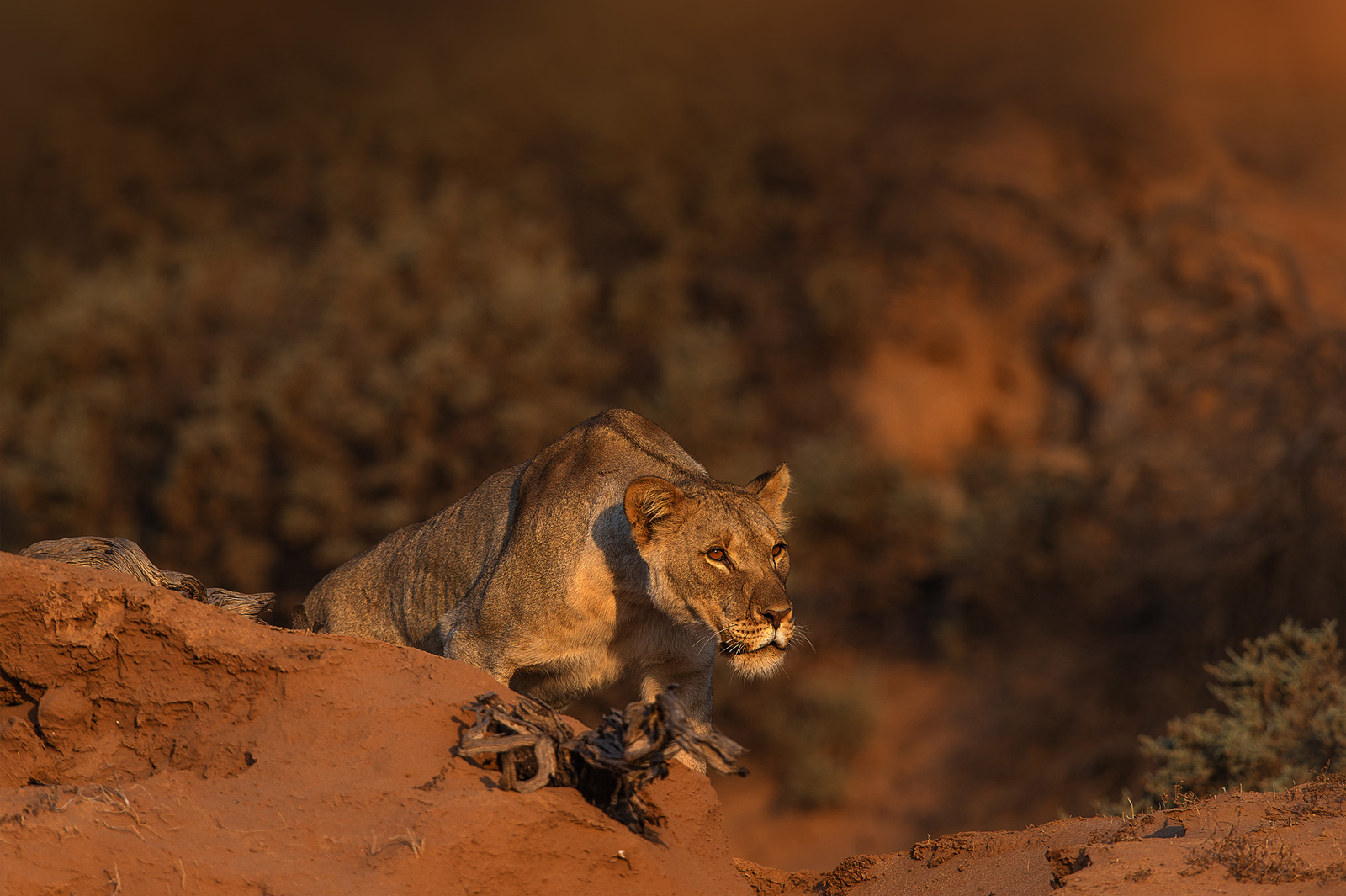 📷 A young female named Angela, about two-and-a-half years old, who is part of the Huab River Valley pride. The pride consists of Angela, her sister, XPL 76 and the young female’s two younger brothers. Here she is stalking an oryx from her vantage point during sunset. © Ingrid Mandt 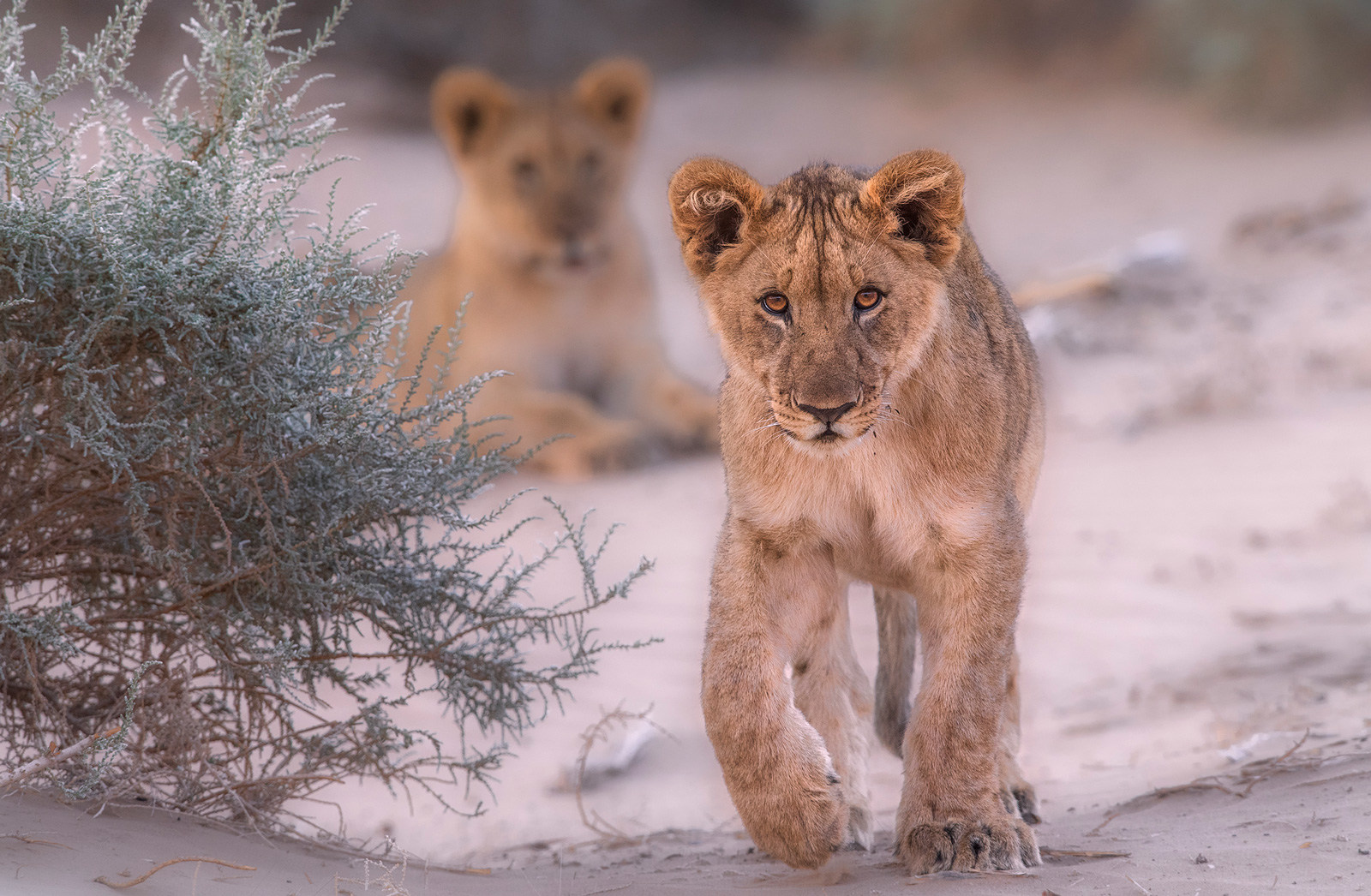 📷 In the foreground, one of six cubs in the Uchab River pride that we had the privilege of spending time with in August 2016. These are the offspring of two young females, “Missy” and “Cheeky” and their first litters sired by “Gretzky” and his brother, XPL 98 (the latter died of anthrax in January 2017 in the Uchab river). © Ingrid Mandt 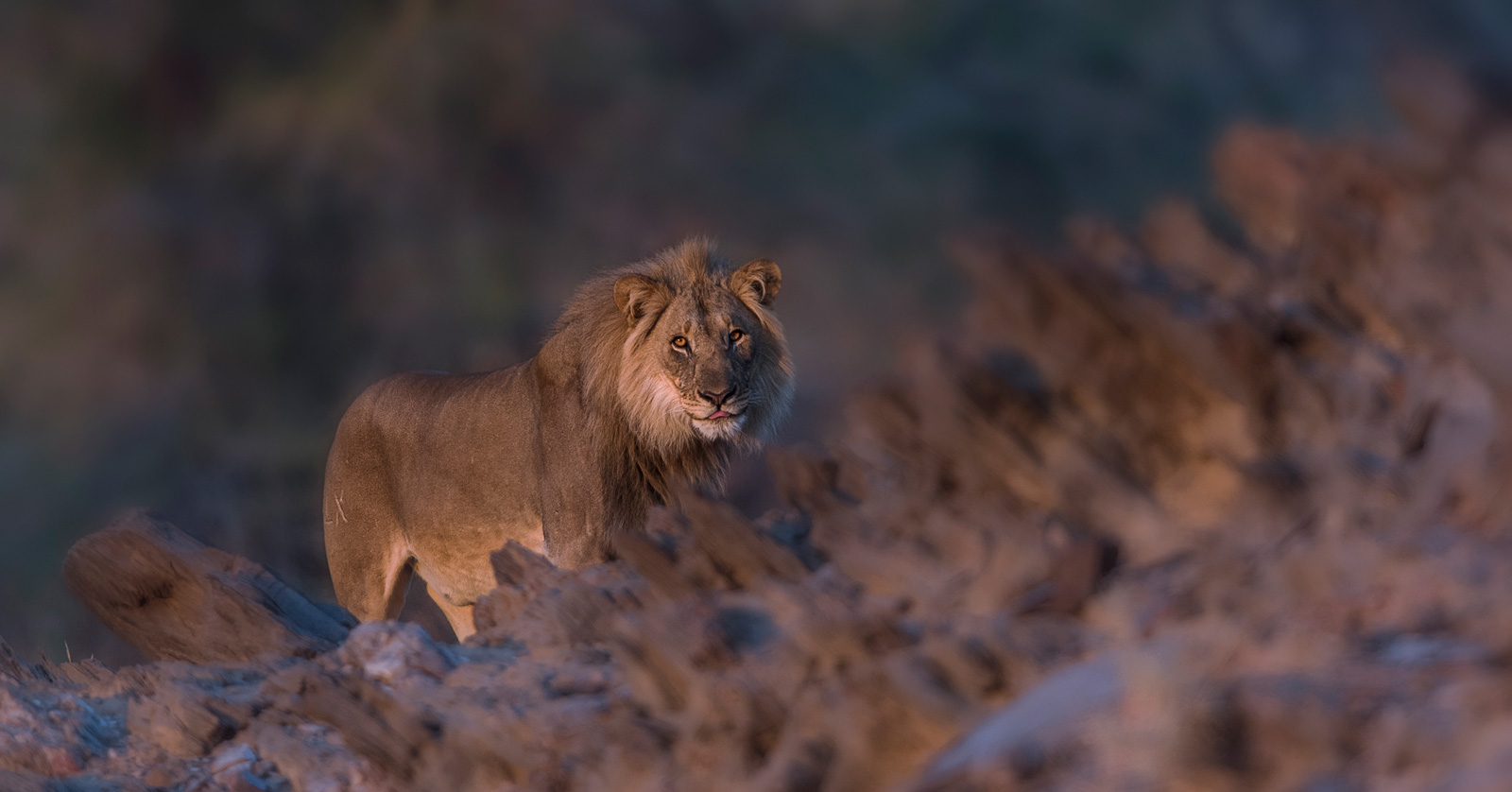 📷 The beautiful, blonde maned “Gretzky” of the Uchab River pride. He is now the only remaining young male in the pride, with a big responsibility on his shoulders to ensure the survival of the entire pride. © Ingrid Mandt 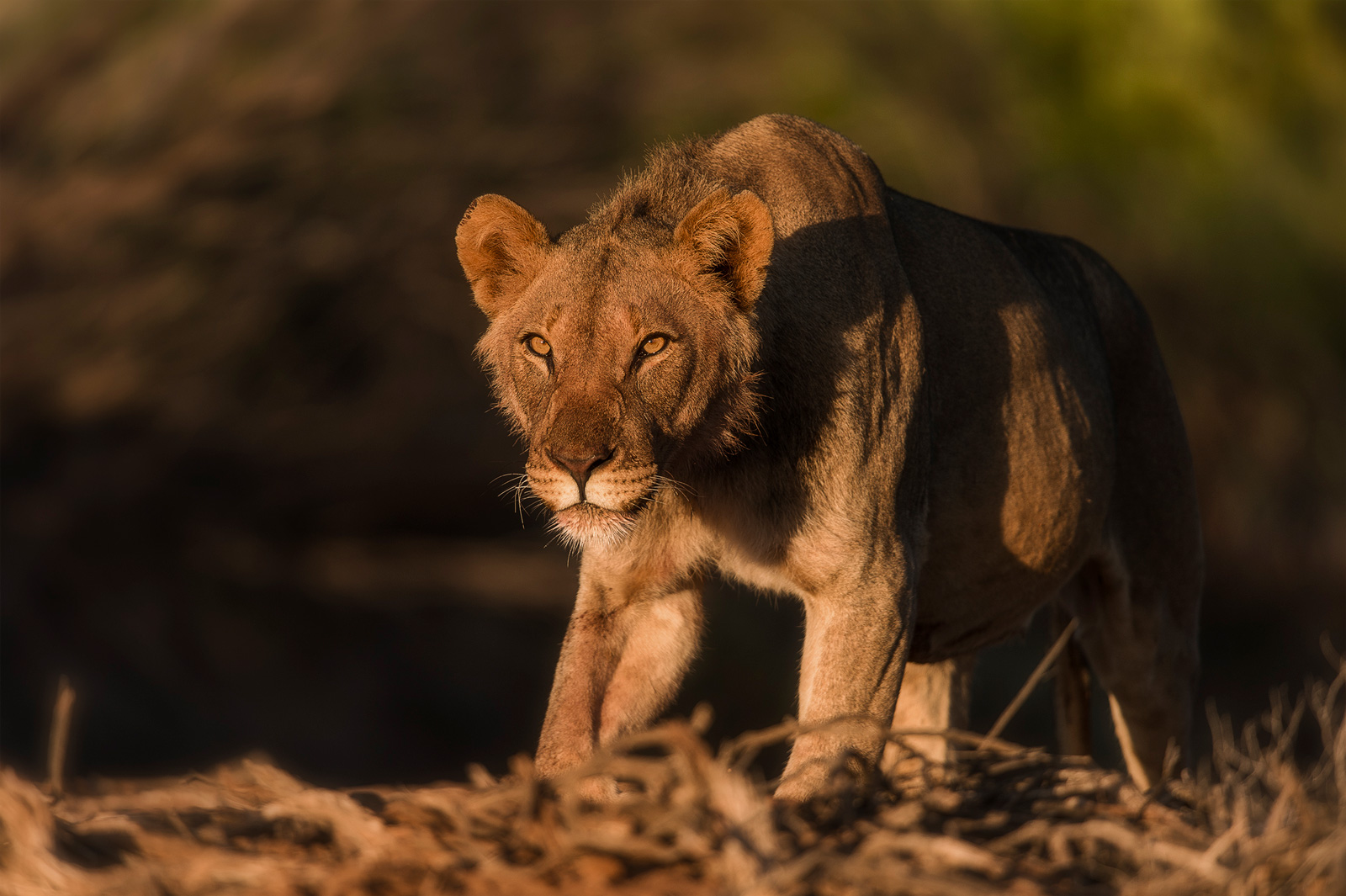 📷 The brother of our “Golden Boy” of the Huab, “Nkosi”, spotted in March 2016 after gorging himself on a fresh zebra kill in the early morning hours. He is a curious and playful young lion. © Ingrid Mandt 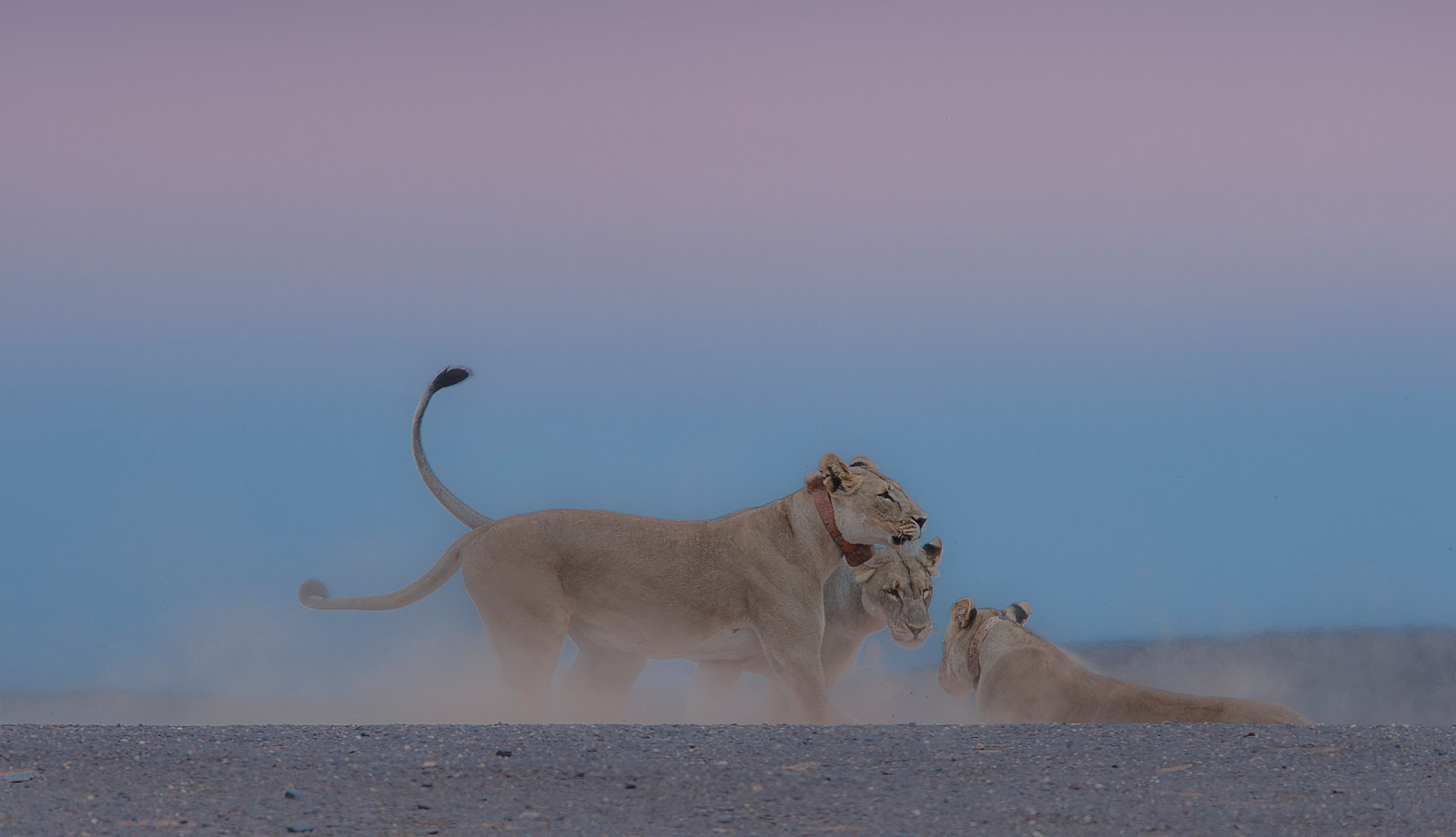 📷 Four Obab lionesses, part of Lovechild’s pride, displaying typical social behaviour in the early hours of the morning – close to the Uniab waterfall on the Skeleton Coast. The nearby waterholes in the Uniab attract springbok and oryx antelope and is a constant source of prey for the lions. © Ingrid Mandt 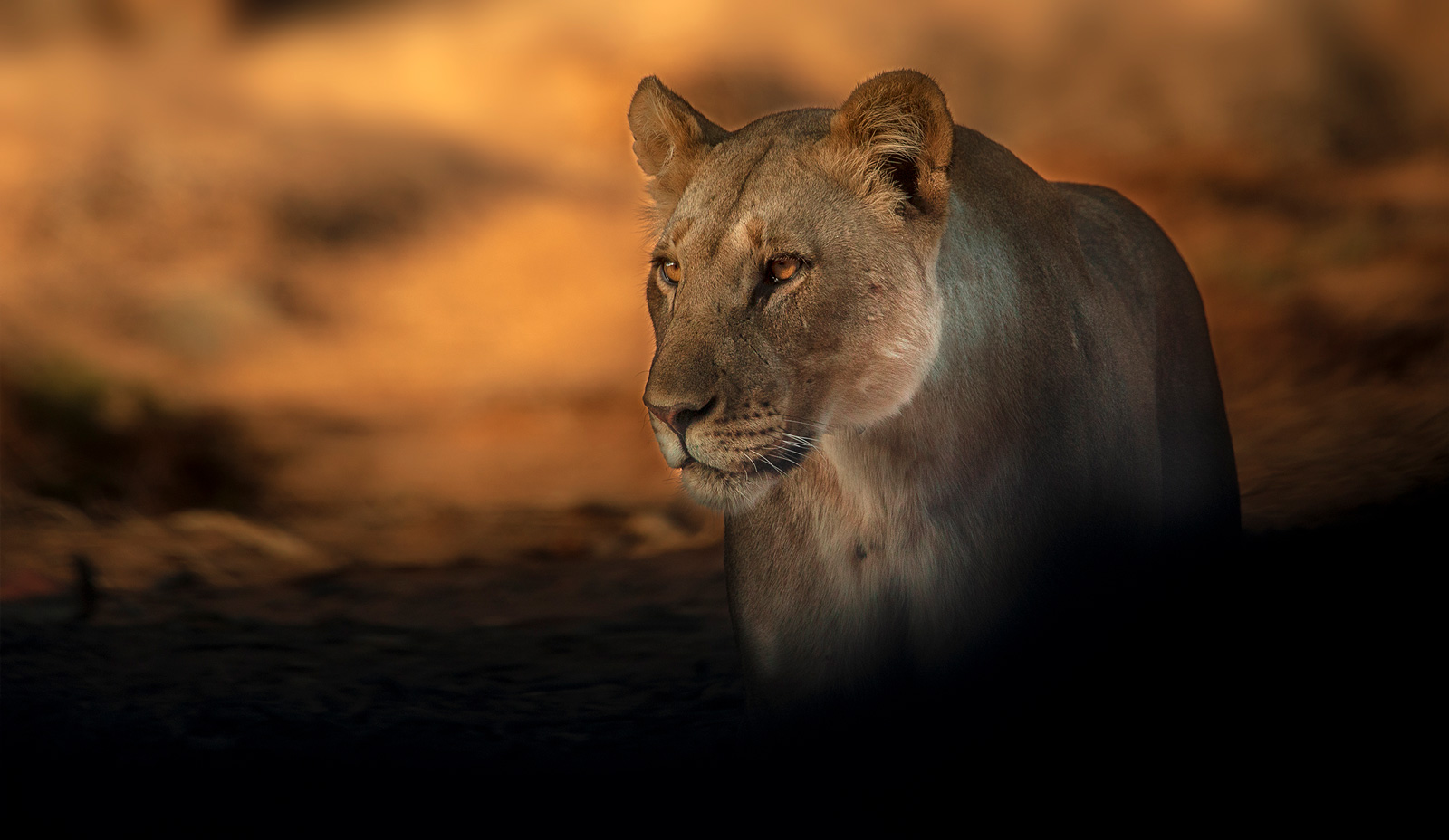 📷 “Missy”, the lady of the Uchab River, making a dramatic appearance in January 2015. © Ingrid Mandt

📷 A beautiful young female and her brother on an oryx kill in the Huab River valley in September 2015. Three months later, we got the devastating news that they had both been shot at Slangpos by a farmer after they caught one of his cows. Ironically, we had attended a meeting earlier that same day at Palmwag Lodge to address human-lion conflict issues. © Ingrid Mandt 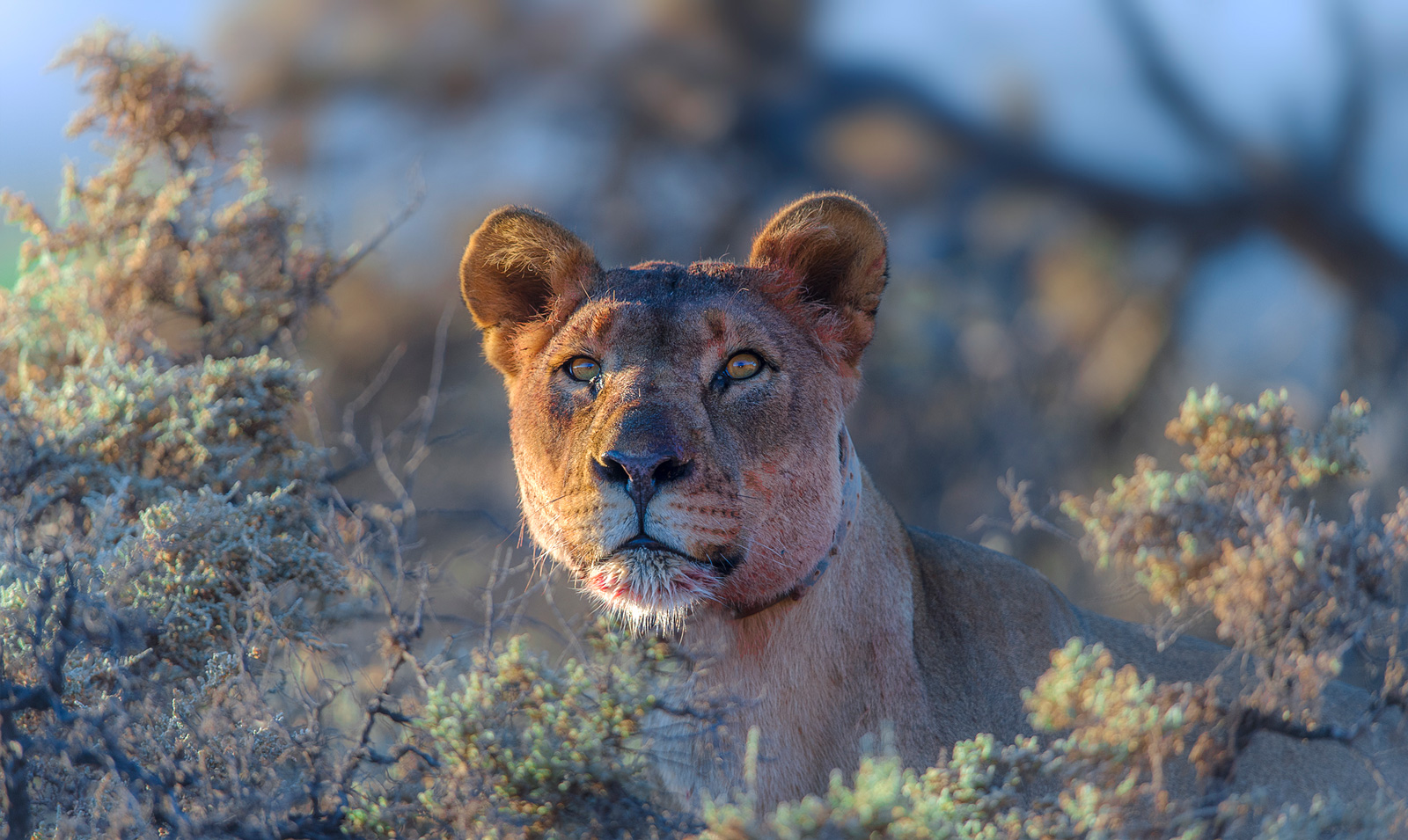 📷 XPL 76, the sister of “Angela”, and part of the two-female coalition, who despite the odds keep the Huab River valley populated with rare desert lions. They are the “Queens of the Huab” – resilient, formidable and successful hunters who have lost many cubs to human-lion conflict incidents over the years. © Ingrid Mandt 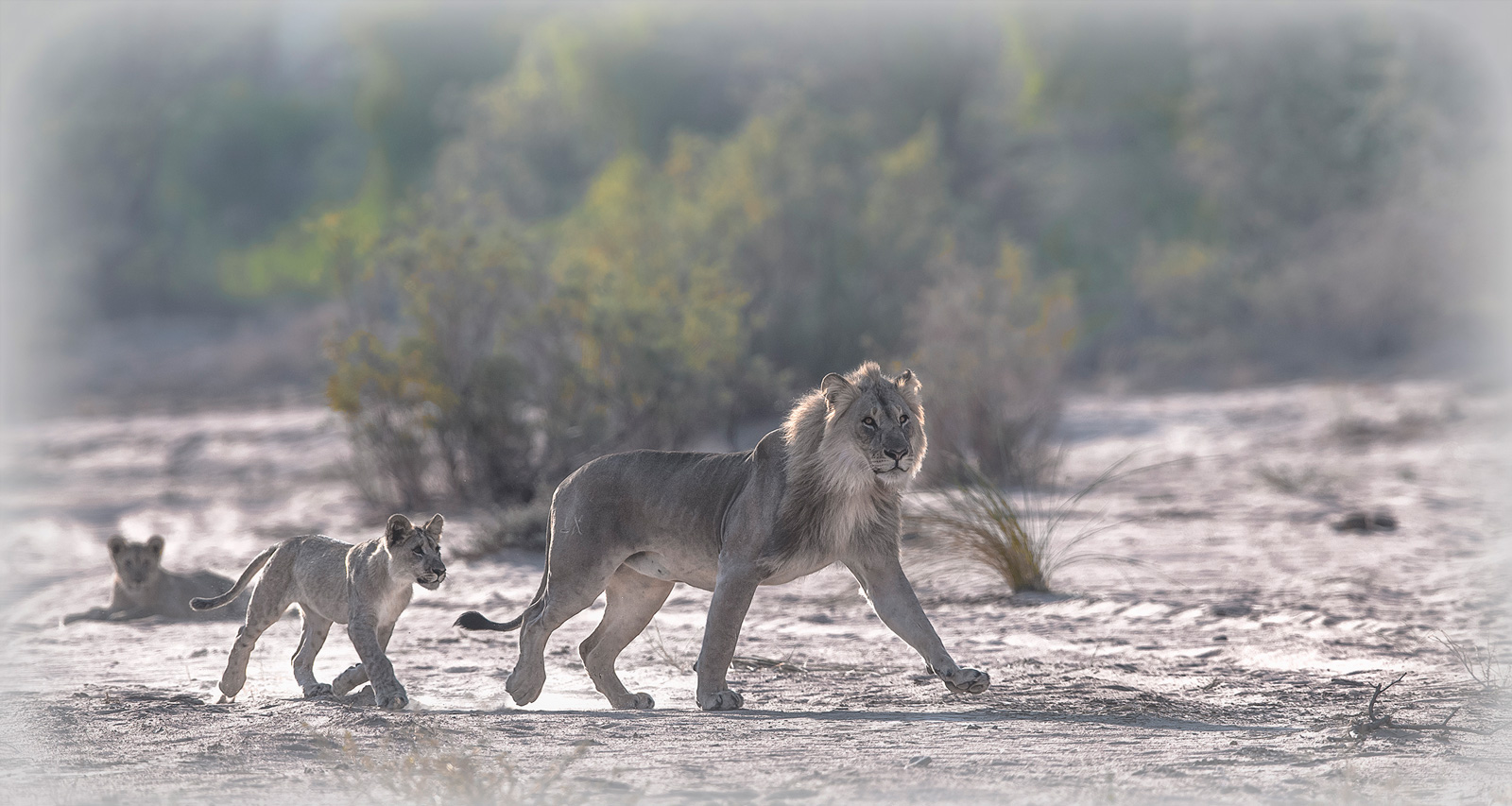 📷 “Gretzky”, of the Uchab River pride, showing off his young son. He was harassed by the young cub who could not leave his tail alone! © Ingrid Mandt

📷 “The Five Musketeers”, made famous by the movie The Vanishing Kings, looking for shade in one of their favourite haunts near the Sawurachab river in January 2014. Herdsmen subsequently killed all five lions in human-lion conflict incidents. © Ingrid Mandt 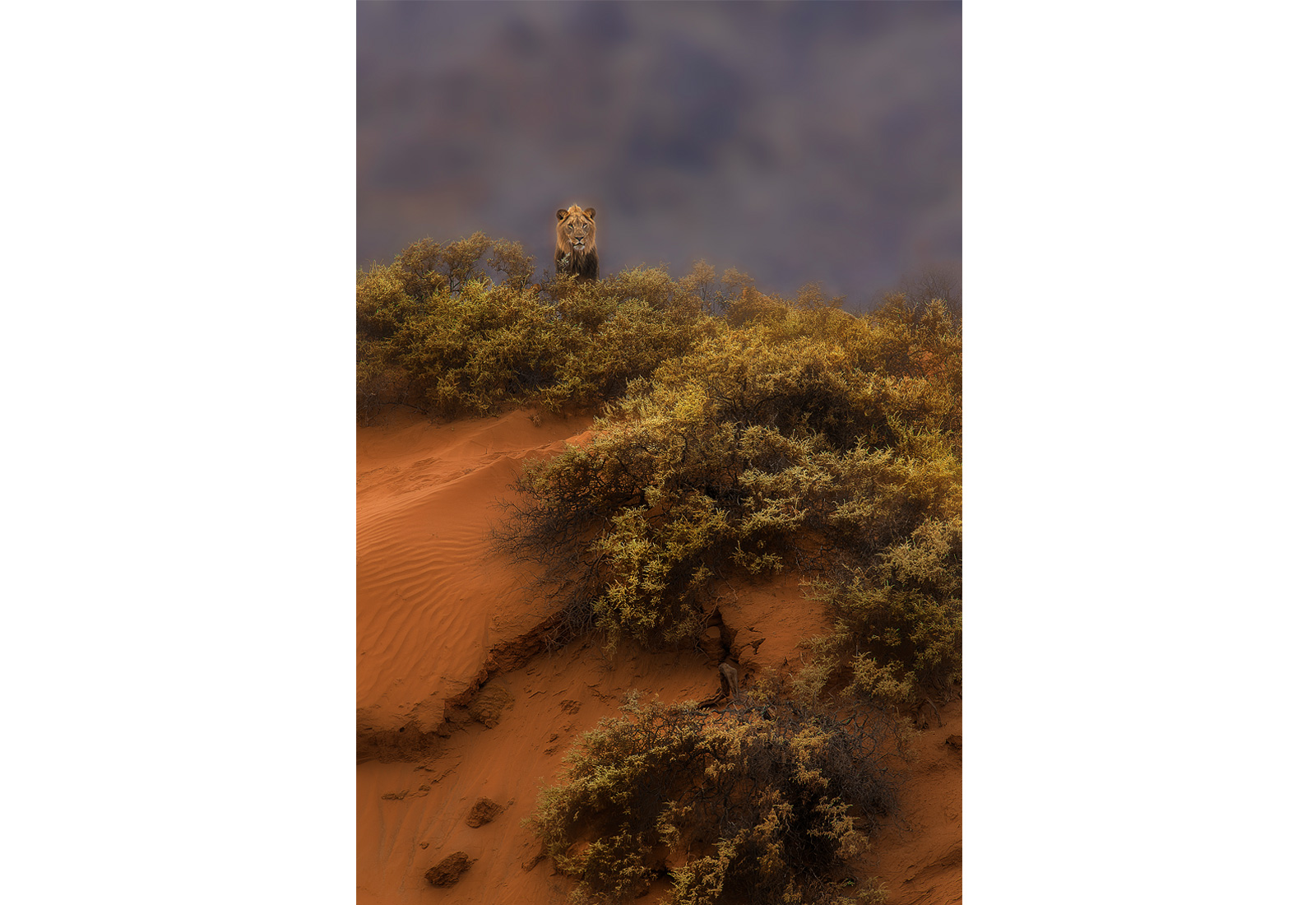 📷 “Nkosi” spotted an oryx nearby and is getting focused! This is an ideal stake out and ambush spot for the lions, especially just before sunset and sunrise. © Ingrid Mandt 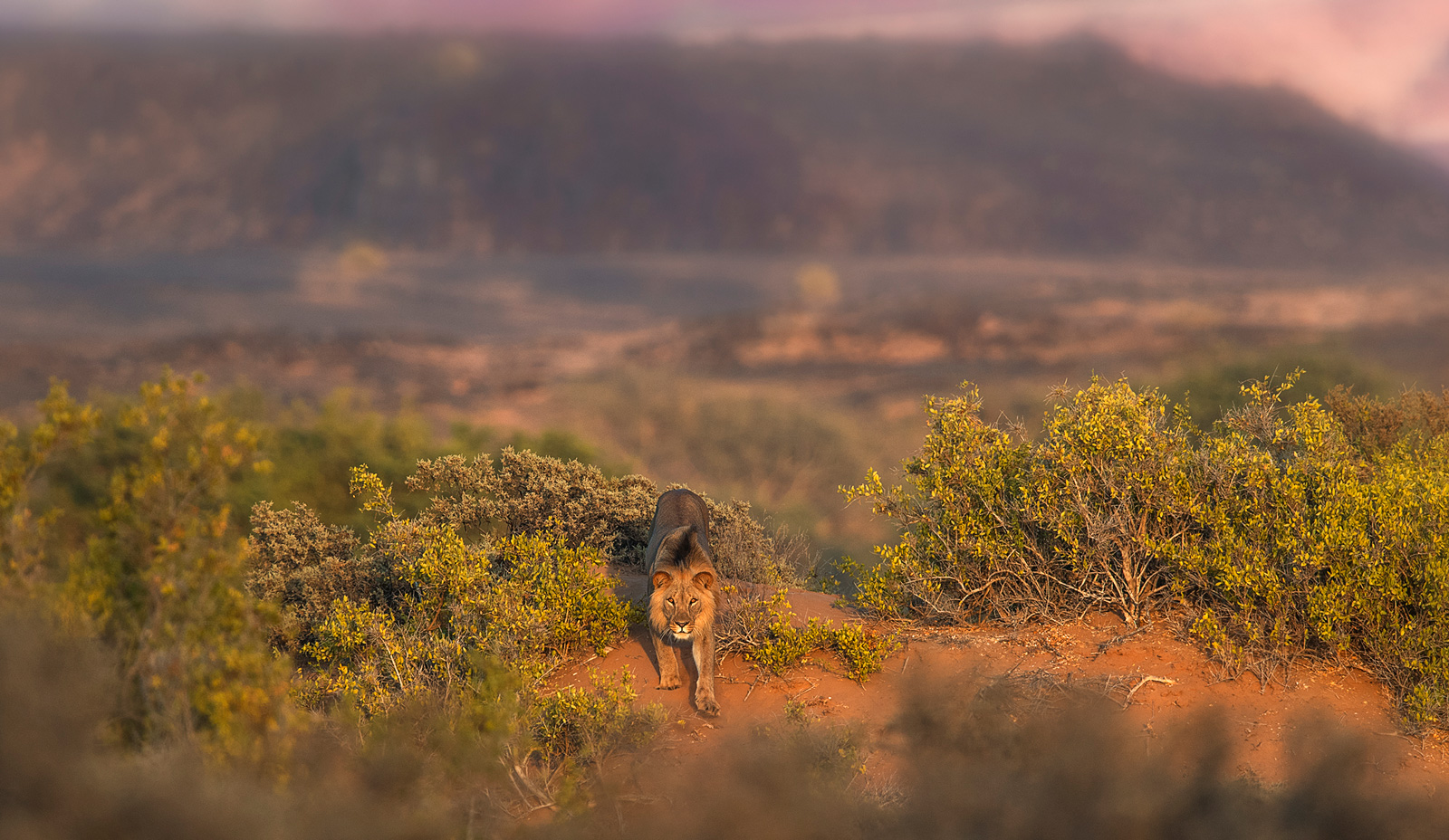 📷 “Nkosi”, which means “King” in the Nguni language, our golden boy of the Huab River valley, seen here in December 2016 taking a leisurely stroll. Still young, about three-and-a-half years old, he is bound to leave the pride along with his brother soon – hopefully to form a coalition looking for other females, something which is very important to keep the gene pool pure. © Ingrid Mandt 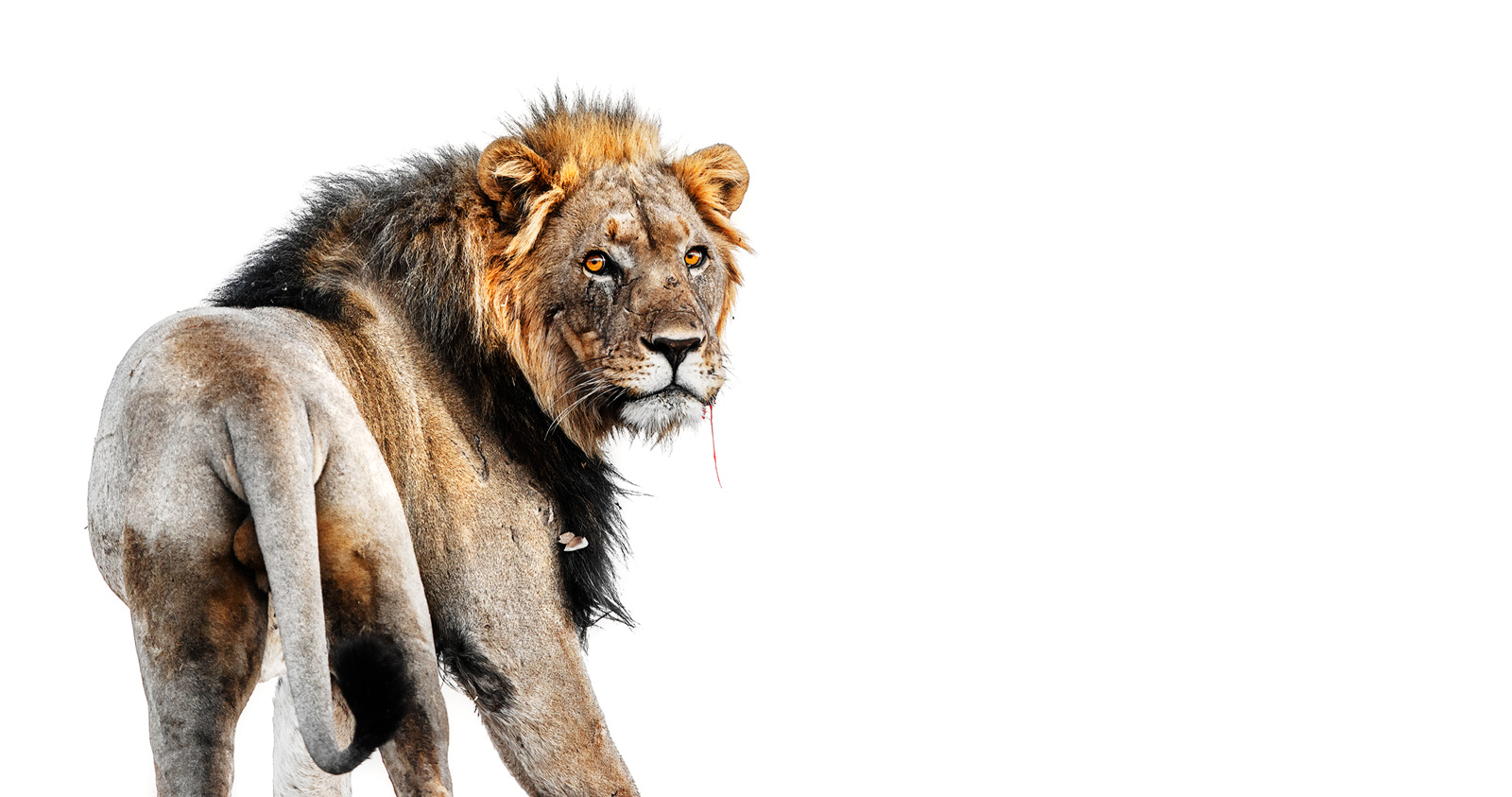 📷 XPL 87, an adult male of the Orowau/Hoanib prides near Gorra in the Orowau area, leaving his lookout post. This was the last sighting of him just after he got into a huge fight with a coalition partner “Kebbel”, over mating rights with the Orowau females, of which three were in oestrous. © Ingrid Mandt 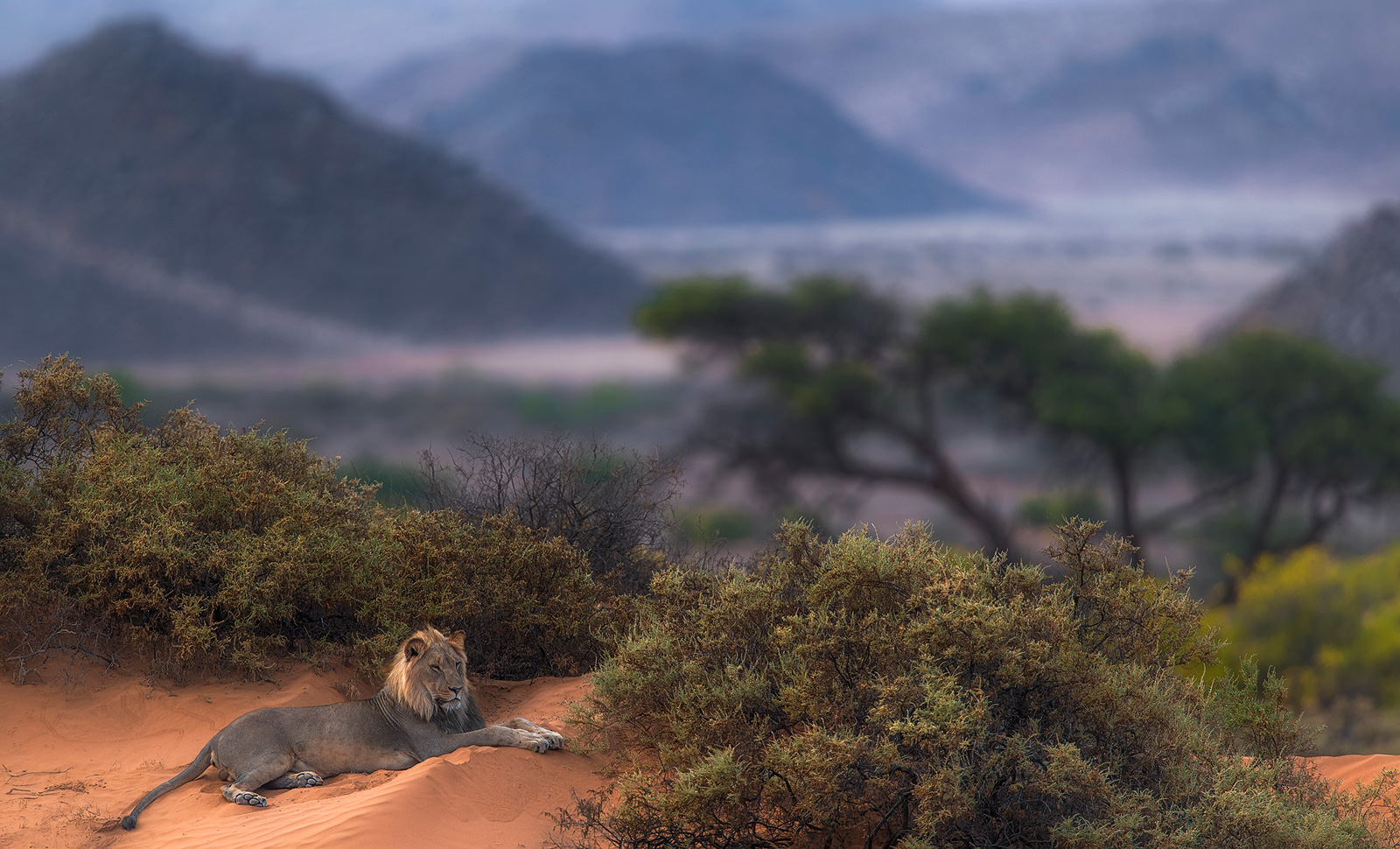 📷 “Nkosi”, king of the Huab! Lazing on a nicely elevated site to spot his prey, against the beautiful backdrop of the Huab Valley – a sight to behold! © Ingrid Mandt 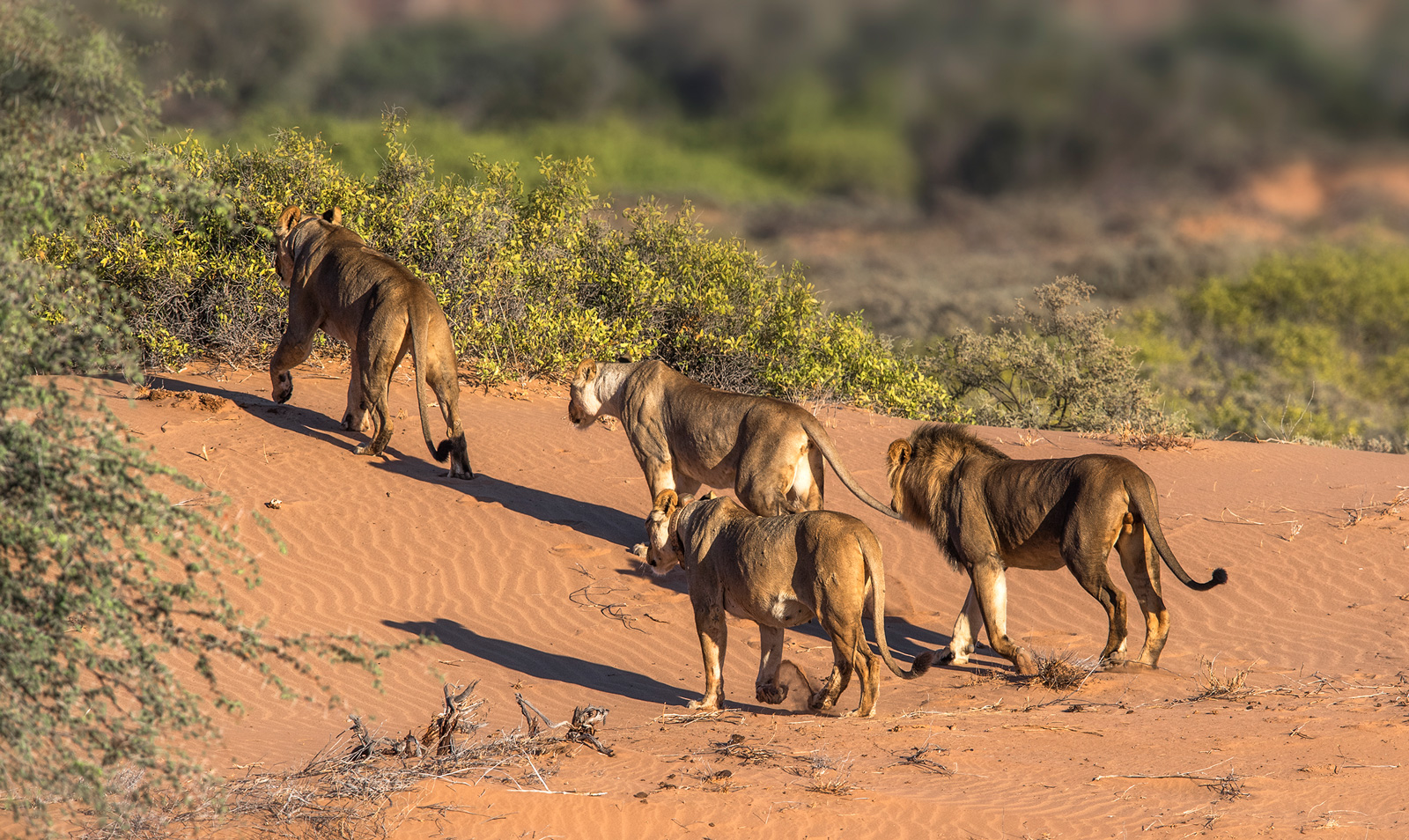 📷 Four of the pride of five Huab lions near Blerpos in the Huab River, December 2016. © Ingrid Mandt

📷 In May 2014, months before the death of the male Lion “Rosh”, (shot in a human-lion conflict incident), his offspring are seen here in happier days near the Barrab river. The whole pride was together feasting on a zebra kill. © Ingrid Mandt 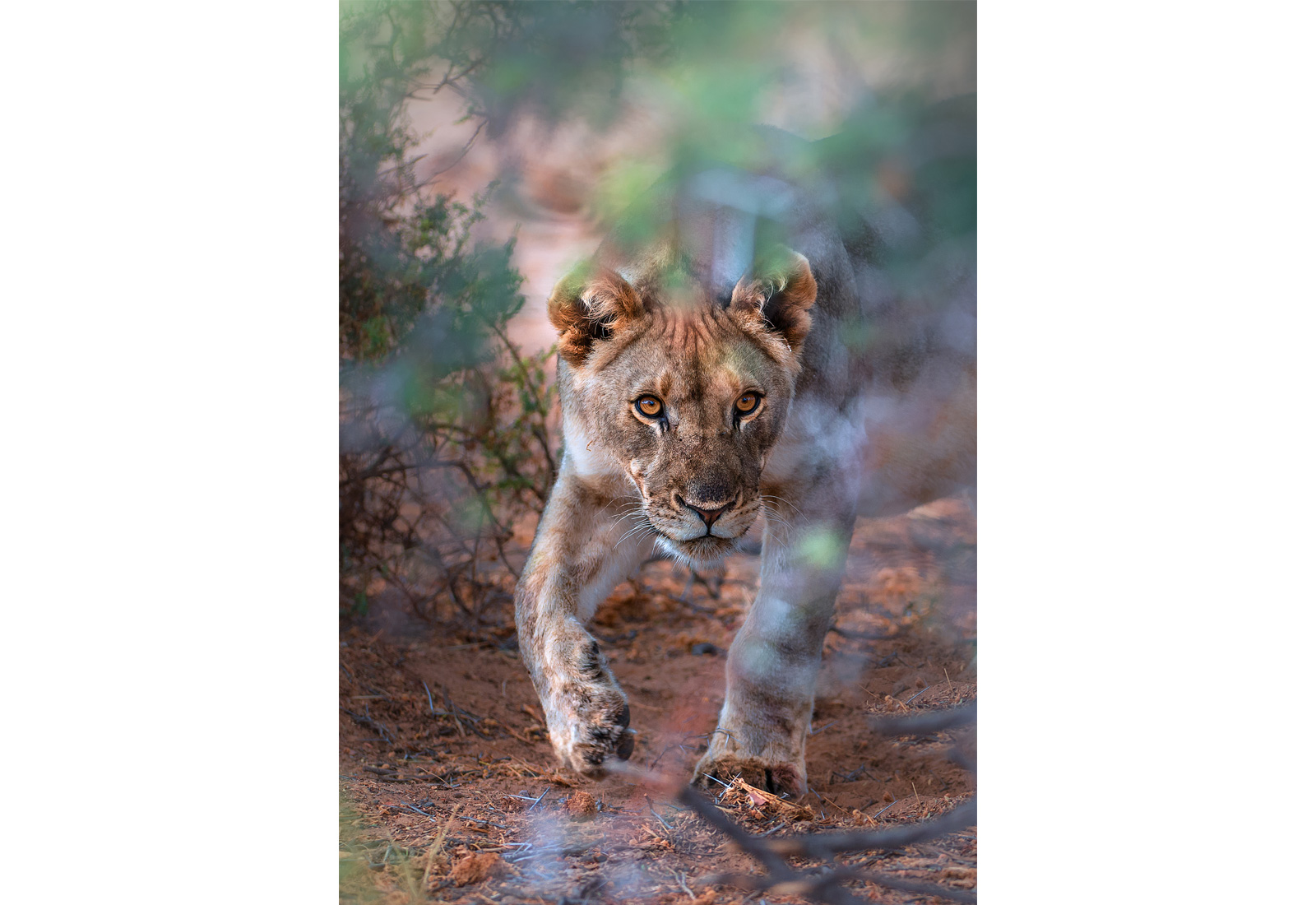 📷 A young Huab female having a closer look at “Bosluis”, our red Landcruiser. © Ingrid Mandt