Posted on February 26, 2018 by teamAG in the Decoding Science post series.
ShareTweetPinEmailShareShareLinkedIn 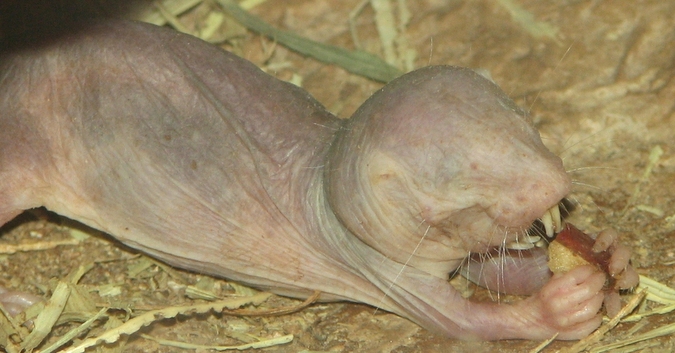 Naked mole-rats are weirdly spectacular – they are bare-skinned, wrinkly and buck-toothed, and they live in large underground colonies in East Africa where only the queen breeds, with a few selected males. They produce a unique protein form called hyaluronan, which has anti-cancer properties, and they don’t go through menopause and can breed at any age. They can also live without oxygen for up to 18 minutes. What’s more, they live for more than 30 years – about five times longer than other mammals of similar (mouse) size.

But there is more…

Did you know that the risk of dying in humans doubles every eight years after the age of 30? This mathematical equation that describes ageing is known as the Gompertz’s mortality law, and applies to most species.

But naked mole-rats ignore this norm – their risk of dying remains constant as they advance in age! They share this trait with a few other animals and plants, like some species of jellyfish, tortoises and trees. They do eventually die, of course, but the reasons for death are still being researched – and seem to relate to predation, infection, starving or lack of water.

According to a recent study, these fascinating creatures have a flat mortality curve.

Says Buffelstein: “Research has shown that the chance of dying for mammals such as humans, horses and mice, among others, increases exponentially with age, according to the Gompertz law. Our research demonstrates that naked mole-rats do not age in the same manner as other mammals, and in fact show little to no signs of ageing, and their risk of death does not increase with age. These findings reinforce our belief that naked mole-rats are exceptional animals to study to further our understanding of the biological mechanisms of longevity.”

The researchers based their findings on 3,329 naked mole-rats living in colonies in their research facility over more than 30 years. They found that on any given day, an average mole-rat’s chances of dying were 1 in 10,000. “Most naked mole-rats never breed, but the small proportion of mole-rats that do breed fared even better”, said study co-author J. Graham Ruby.