Posted on August 10, 2020 by Sarah Kingdom in the News Desk post series.
ShareTweetPinEmailShareShareLinkedIn

“The oil spill and the ecological crisis happening right now in Mauritius will have an everlasting impact on the natural ecosystem, the marine ecosystem of the lagoon.” says Mauritian ecologist, environmental expert and former global strategist for Greenpeace International, Sunil Dokwarkasing.

On the 25th of July, the MV Wakashio, owned by Japanese company Nagashiki Shipping, ran aground on a reef 3 km off the south-east coast of Mauritius. The carrier, which was en-route from China to Brazil, held 3,894 tons of low-sulphur fuel oil, 207 tons of diesel and 90 tons of lubricant oil.

Despite residents’ warnings that the ship was sinking on the 5th of August, it took days for the government to finally swing into action. Sunil Dokwarkasing, a Mauritian ecologist, noted that the “delay in trying to address the problem of this wreckage on our reef is, I would say, grossly negligent by our government. Their primary concern was to refloat the ship – no one considered the danger represented by the 3,800 metric tonnes of oil on the ship. No one considered or seemed to care about the substantial risk this would present to the island and the lagoon; the government sat on the file for more than 12 days without making the decisions that should have been made”.

Satellite and drone images show a dark slick spreading in the turquoise waters and videos posted online show oily waters lapping the shore. “The oil trail is right next to an island called Ile aux Aigrettes, which is a natural reserve with endemic and endangered species,” said Reuben Pillay, director of virtual tour site reubsvision.mu. “For the local people, it’s been terrible.”

Around 1,000 tonnes of fuel have leaked into the ocean so far and, while some 500 tonnes have been salvaged, around 2,500 tonnes remain on board. The fuel spilling from the Wakashio has created an ecological disaster that endangers corals, fish and other marine life around the Indian Ocean island, officials and environmentalists say. “This is likely one of the most terrible ecological crises ever seen on the small island country,” Greenpeace Africa said in a statement on Friday. Sunil Dokwarkasing elaborated, “we know that an oil spill in any marine ecosystem will disturb and even destroy the marine ecosystem; it may never regain its original status. I don’t have much hope that we will be able to restore the lagoon to the way it was fifteen days ago”. Sunil refers not just to the ecological impact, but the inevitable sustained social impact. He explains that there are 400 registered fishermen that earn their livelihood from fishing in the lagoon and surrounding areas, and possibly the same number of unregistered fishermen. He estimates that the livelihoods of about 1,000 households will be destroyed and that the tourism industry will be heavily impacted, given that many people take tourists out on sightseeing tours of the lagoon.

Just days before lockdown I was in Mauritius, swimming in these very waters with local NGO Eco Sud, examining signs of coral bleaching in the bay that dated back to the late 1980s and seeing the regeneration that was just starting to be visible, decades later. I’d spent time in the lagoon monitoring some of the island’s critically endangered hawksbill turtles and taking part in a coral farming project that aims to grow corals to replenish damaged areas of the island’s reefs. I now know that everything I had seen is more than likely shrouded in oil – and dying. I also visited the tiny rocky wildlife sanctuary of Ile aux Aigrettes, where resident scientists from the Mauritian Wildlife Foundation introduced me to some of the country’s more endangered inhabitants, including pink pigeons, the Mauritius kestrel and the Mauritian skink, all of which have all been brought back from the brink of extinction. I toured the island’s extensive nursery of indigenous and native plants. The passion of the scientists was contagious, and I left the islet with an appreciation of the dedication that goes into conservation, habitat restoration, and saving of species. These same scientists and wildlife workers are now ferrying dozens of baby tortoises and rare plants from the island to the mainland in an attempt to save them.

The National Coast Guard received no distress call from the ship, a government statement said, adding that police are investigating possible negligence. Attempts to stabilise the vessel and pump the remaining fuel from its hold have failed, and local authorities fear bad weather, rough seas and strong currents could further rupture the tanker. “Due to bad weather and constant pounding over the past few days, the starboard side bunker tanker has been breached, and an amount of fuel oil has escaped into the sea,” said Nagashiki Shipping Co. Ltd, owner and manager of the vessel, in an emailed statement. “Given poor sea conditions, salvage efforts are currently on hold.” Sunil Dokwarkasing was quite scathing on the subject of the clean-up, adding that “in the environment, the first thing we do is consider precautionary principles… and this particular principle has been totally neglected by the government in their decision making. Had they emptied the tanks of the ship, the probability of leakage would have been minimised.”

Akihiko Ono, executive president of the shipping company, today told a press conference in Tokyo “we apologise profusely and deeply for the great trouble we have caused… we will do everything in our power to resolve the issue.” A statement from the Japanese foreign ministry says the country is planning to send a six-person disaster relief team, at the request of the Mauritian government, to help with removing the oil. France is also sending a specialist team and equipment. Meanwhile, police in Mauritius, accompanied by the ship’s Indian captain, are preparing to board the vessel and conduct a search.

A government environmental outlook released nearly a decade ago stated that Mauritius has a National Oil Spill Contingency Plan, but the equipment on hand was only “adequate to deal with oil spills of less than ten metric tonnes”. In case of major spills, it said, help could be sought from other Indian Ocean countries or international oil spill response organisations. Some 400 sea booms, mostly homemade, have been floated out into the lagoon, in an attempt to prevent the oil spreading in the strong marine currents. Surface oil is also being pumped out of the ocean. “The clean-up efforts by the civil societies, NGOs, service clubs and others, have surpassed the government’s effort to deal with cleaning, mitigation and containing the spreading of oil,” says Sunil.

Greenpeace’s Happy Khambule concluded, “there exists no guaranteed safe way to extract, transport and store fossil fuel products. This oil leak is not a twist of fate; it is the result of our twisted addiction to fossil fuels – we must react by accelerating our withdrawal from fossil fuels. The risks associated with oil include aggravating the climate crisis, devastating oceans and biodiversity and threatening local livelihoods around some of Africa’s most precious lagoons”.

Over the past few days, salvage teams have been battling rough seas to remove the remaining oil as cracks spread across the hull of the MV Wakashio. The ship finally broke apart three weeks after it ran aground. The Mauritian Wildlife Foundation confirmed that there were still around 100 tonnes of oil remaining on board but that there is chance that this can be contained. A further 653 tonnes have been pumped out of the lagoon to date. According to Greenpeace Africa, volunteers are being asked to cease their activities and stay away from the waterfront. 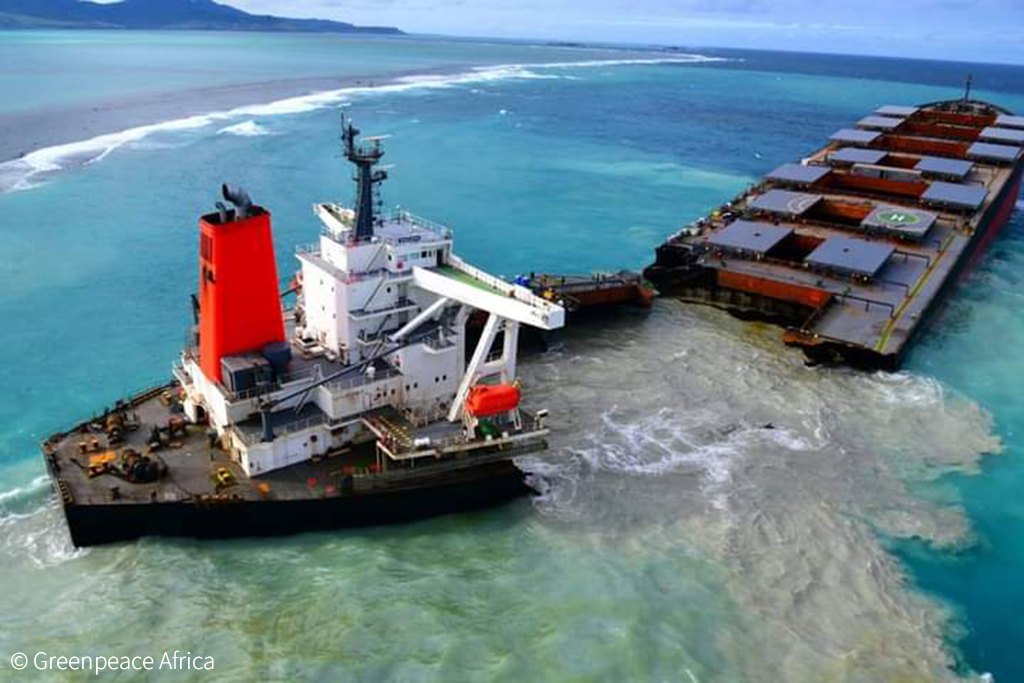 1. If you are in Mauritius you can register to volunteer for beach clean-ups with the Beach Authority office at the Blue Bay Marine Park Centre, the contact person there being Daniel Laurent, Tel: +5259 7355.

3. If you would like to help financially and contribute to the Wakashio Fund, you can donate online via the website https://www.mauritian-wildlife.org/donate mentioning ‘Wakashio’.