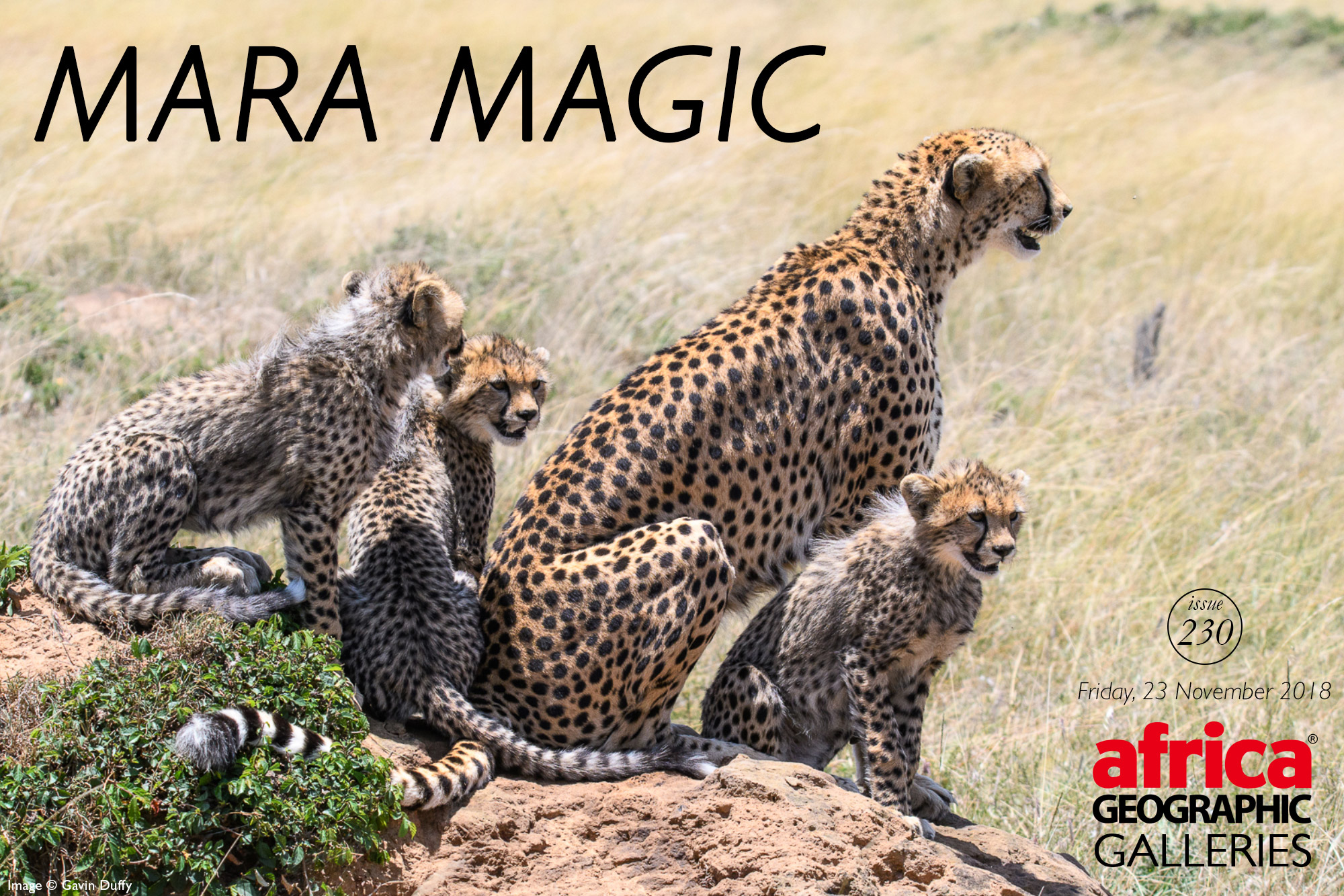 EXPERIENCING THE MAGIC OF THE MAASAI MARA

Having travelled to many other parts of Africa and worldwide to view and photograph wildlife, it has always been a dream to one day take a trip to the Maasai Mara National Reserve in Kenya, one of our ‘bucket list’ priorities. That dream came true when my wife and I embarked on this trip in September this year which we booked and arranged through Africa Geographic. Their service and support by arranging the itinerary, flights and transfers, and our stay at the Sentinel Mara Camp on the banks of the Mara River were superb!
The Maasai Mara National Reserve is a wildlife paradise with abundant game, birds, predators, and vast plains and vistas for photographing everything from fauna and flora to magnificent landscape scenes, as well as spectacular sunrises and sunsets – a photographer’s ultimate all-round destination.

This leopard female had been out on the plains and was returning to her cub waiting in the more secure dense bush. She waited for the safari vehicles to move away and make a gap for her to move through. We were very impressed with the park rangers’ presence and supervision in getting the vehicles to create sufficient space for her to get through and reunite with her cub.

Elephants were more commonly seen in the marshy, wet areas on the plains or in the forest areas.

We spotted this lioness out on the plains stalking some zebras. She was very well camouflaged in the long grass, but I managed to get a brief glimpse and a photo of her moving through the grass. We watched her unsuccessful, but quite spectacular, charge from a distance.

We were fortunate to see many birds on this trip, which included a variety of raptors, like this brown snake eagle, and colourful local birds endemic to this area. There are more than 470 species of birds in the Maasai Mara, including seasonal migrants.

Every day in the Mara was a unique experience. On some days we would leave camp before sunrise and return later that morning, while on other days we would head out a bit later and stay out for the entire day, depending on the agenda. The packed breakfasts and lunches provided were lovely, and we all found it quite special to stop out in the reserve at a specific venue or sighting for our refreshment break.

After consuming a sizeable portion of a wildebeest, these lionesses moved off to a nearby stream to quench their thirst. Both of them looked to be in prime condition and were very aware of our presence while drinking.

This group of zebras appeared to be very nervous as there was a lioness in the vicinity. While we were watching them, a small bird suddenly flew up out of the grass and startled the zebras into backing up rather quickly.

These magnificent birds were mainly seen in groups – a male with one or two females in open grassland. The grey crowned crane, along with the black crowned crane are the only two crane species capable of nesting in trees. The birds generally mate for life and may live up to 22 years in the wild.

Jonathan, our Maasai guide, was superb in terms of local knowledge of the fauna, flora, the reserve, and his people and culture. We were also fortunate to have Geoff and Suzanne from Canada on our safari vehicle. They are both well-travelled avid birders with superior expertise in this field. The presence and interaction with these experts enhanced our trip immensely, having both learned and shared respective experiences, which have now culminated into ongoing mutual friendships.
One of the many highlights of the trip was having sundowners out on the plains, or next to a river while watching the sunset with this group of lovely people. Nothing better than good company accompanied by chilled refreshments and beautiful scenery.

The predator sightings were magnificent! We witnessed two different cheetah kills, lionesses on a wildebeest kill, several lion prides interacting with their cubs, lone male lions, as well as jackal, hyena and serval sightings.
One day we came across a young lion cub walking down a game path calling for her mother. We followed her for some time until we heard the mother calling. It didn’t take long for the cub to be found and reunited with her mother and sibling, making it quite a special moment and sighting for us.

These vigilant buffalo bulls were usually seen on the fringes of the grazing herds and were continuously on the watch for impending danger from predators.

We watched this pair of lions for quite some time while they went through the rituals of courtship. The male lion moved off occasionally to mark his territory and then returned to the lioness who wanted to rest and repeatedly rejected his overtures.

We were fortunate to see a serval on two occasions. Servals are small wild cats that have long legs, long necks and thin bodies, and have been given the nickname ‘giraffe cat’. Their large ears help them to listen for potential prey such as insects, frogs, birds and rodents.

The juvenile fiscal shrike is found through most of sub-Saharan Africa. It is also known as the ‘butcher bird’ or ‘Jacky Hangman’ due to its characteristic behaviour of impaling its prey on thorns, branches or barbed wire. The prey is stored in this way for consuming later. The adults have a distinctive black and white plumage, whereas the juveniles have a greyish-brown colouring.

This sighting of the cheetah mother and cubs proved to be one of the highlights of our trip! We followed this cheetah and her three cubs from a long way off to a resting place on a termite mound to observe potential prey. We watched her stalk and hunt a gazelle on two occasions without success, and then return to the waiting cubs to recover and rest.

However, it wasn’t long before we saw another cheetah on a successful hunt. It stalked, charged and took down this gazelle calf right in front of our eyes, all in a matter of seconds from the time of chase to walking off to a secure place to consume the prey.

Watching the wildebeests and zebras crossing the Mara River was such a unique experience! The instinct to cross the river is present irrespective of the danger awaiting these fantastic animals. The fortunate make it across, but many die trying.

These crossings can turn into quite a frenetic spectacle where the animals attempt the crossing in the shallow water and rapids, while the crocodiles wait below the rapids downstream to catch those animals that slip or fall into the deeper water.

This wildebeest herd had taken a rest from migrating, and many calves were seen resting, always surrounded by protective adults.

Zebras were also part of the river crossing drama, and we watched many zebra foals, wide eyes with fear, swimming close to their mothers who attempted to guide them to safety.

Unfortunately, some animals do not make it across the river alive, and these two Nile crocodiles were spotted on the banks of the Mara River tussling for a zebra head.

Back to the other fantastic sightings: This young spotted hyena pup emerged from a culvert under the road as we were passing by. The pup appeared to be waiting for the return of the clan and sustenance from its mother.

The violet-backed starling, also known as the plum-coloured starling, is one of the smallest in the starling (Sturnidar) family group, which includes starlings, mynahs and oxpeckers. It is quite a striking bird!

Our accommodation was at the Sentinel Mara Camp; a non-permanent tented safari camp set up each season in a forest along the banks of the Mara River. It had well-appointed colonial-style décor, with a central dining area for meals, three relaxation areas with internet access, charging facilities and reading material. Minnie and her competent staff superbly managed the camp.

The camp has seven fully-serviced luxury tents, positioned under large trees with excellent views of the Mara River. Each tent has an en-suite toilet and shower facilities.
Each tent is positioned to provide privacy and superb views of the Mara River. Resident hippo pods were present with an abundance of birdlife and early morning song. This lodge has been specifically designed to be eco-friendly, with solar power and waste recycling a prime focus area.

A world-renowned British wildlife photographer once said to me that “the Maasai Mara is not just about the migration and river crossings, but a whole lot more, even if you don’t see any crossings – you will come away deeply satisfied with your experience”.
We have come home from this trip enthralled by the unique beauty, the abundance of wildlife, the Maasai people and culture, the service and accommodation, and many great memories and new friendships — a unique once-in-a-lifetime experience. 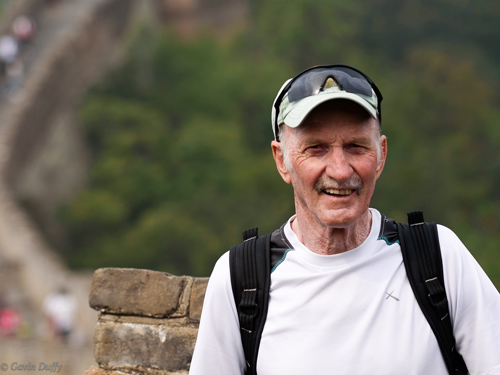 Gavin Duffy is an amateur travel and wildlife photographer based in Johannesburg, South Africa.
After retiring from an International brewing company, Gavin revived his love for photography as one of his main pastimes. He, and his wife Rita, have travelled to several locations on photographic safaris and expeditions – including the Arctic, Norway and the Northern Lights, China, Vietnam and Cambodia, Alaska, Europe, Africa and many locations in their home country of South Africa.
Gavin is a member of the Board of Examiners at the Institute of Brewing and Distilling in London, and a silver member of the Nikonians International Photographic Community. 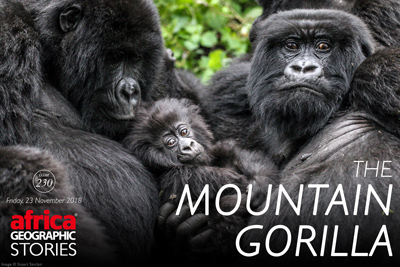 Story: The Mountain Gorilla – Gentle Giants of the Forest
“The thrill of trekking for mountain gorillas in the astonishingly beautiful misty highlands of East Africa is not difficult to explain. Quietly observing these gentle giants as they go about their day is a once-in-a-lifetime opportunity for a privileged few, and to be treasured beyond compare. If you are lucky enough to exchange glances with one of the troop, you will become aware of that narrow genetic gap between our two great ape species. The exchange of recognition, of awareness, is obvious.”