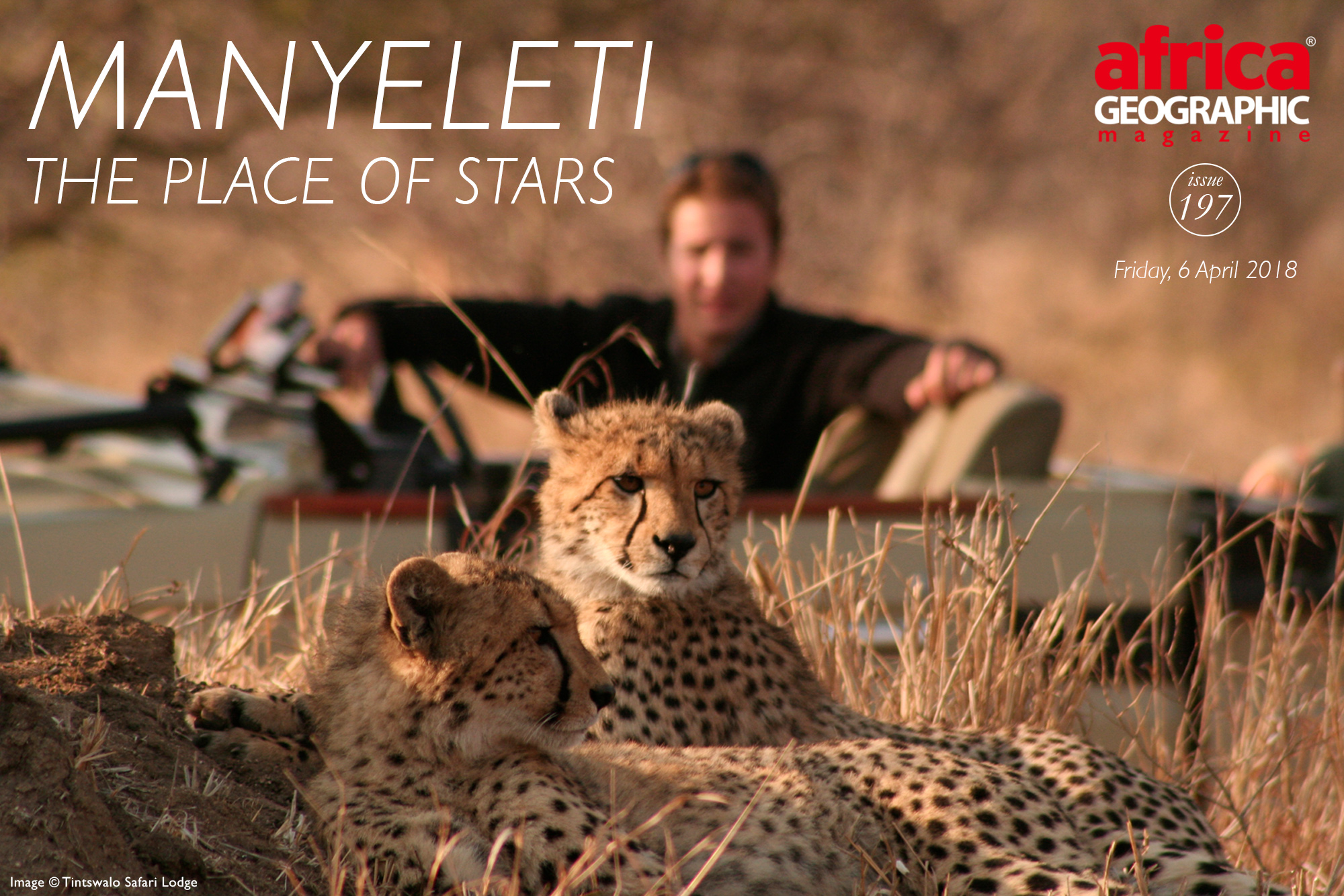 Manyeleti Game Reserve is a bit of an open secret amongst those in the know. But the secret details depend on who you speak to. Jaundiced, local Kruger National Park die-hards have either never heard of it, or write the reserve off as not worthy of their holiday time (most never having been there). Others with more experience, whisper that this gem is poised for stardom.

And so, when a good friend of many years, Michel Girardin, landed the job of managing a rustic bush camp in the remote south of the reserve, I grabbed the opportunity and headed out to see for myself.

I trundled into Pungwe Safari Camp late one afternoon and fell in love with the place. There is something about off-the-grid bush camps that stirs the primal bushman in me. Soon, I had met the six European guests who had already been there for a few days and were enjoying tea and delicious pastries before heading out for another game drive adventure.

Two things hit home immediately. Firstly, their stories of lion, leopard, elephant, rhino, buffalo, wild dog, and cheetah sightings suggested a productive game-viewing area. And secondly, the laid-back charm of this rustic off-the-grid bush camp had seeped into their bones, and they clearly felt like part of the family.

And so, that afternoon Michel and I jumped into a game drive vehicle and headed out. An hour of slow meandering found us near the unfenced Kruger border, watching two cheetah brothers patrolling the open savannah that makes this part of the Greater Kruger so good for wildlife sightings. One of the brothers jumped onto a concrete road sign a few metres from our vehicle to get a better view of the surrounding area.

We sat with these boys for a while before they sauntered casually off into a thick grove of bushwillow shrubs some distance away. Thrilled with my first cheetah sighting in years, the pride of lions slinking across the road in the fading light was a bonus. That night, a leopard rasping his challenge next to my tent and four species of owls hooting kept me awake for a few hours – my urban senses absorbing this beautiful African soundtrack like a sponge.

Two days of bliss later, Michel dropped me off at Tintswalo Safari Lodge, my home for the next two nights. Along the way, we stopped for an hour to watch a baby leopard hiding halfway up a massive weeping boer-bean tree. He had been left there by his mom and was obviously given strict instructions not to move under any circumstances. Michel and I parked in the shade a distance away to see if mom would return. She did not.

Michel and I did not say much during that hour, but he did ask me an important question.

“What does exclusive mean to you, concerning lodges?” he probed.

After some pondering, I ventured that exclusive means expensive, for rich people, not available to ordinary people.

He proffered: “Sadly, that is more a reflection of how marketers have hijacked the word. In fact, exclusive has no association with cost. Exclusive means that the experience is limited to a few people at a time. Remember that when you write about Manyeleti.”

I was greeted at my new home for the next few days by my guide, Christof Schoeman, who led me across a wooden bridge, past a tree hosting a family of bushbabies and through a seriously grand and intriguing lodge entrance. Tintswalo Safari Lodge, in the northern sector of Manyeleti, is inspired by a fusion of the magnificent rock structures of the Monomotapa kingdom (think Great Zimbabwe) and colonial-era explorers, such as Speke, Livingstone, and Burton.

The levels of luxury and superb service are outstanding, and my two days there were remarkable in many ways. I live in Cape Town, where excellent restaurants grow on trees, and well, the meals at Tintswalo were to die for.

Michel had told my guide Christof of my fondness of wild dogs (painted wolves), and despite my assurance that I am not phased about which encounters we enjoy, Christof and his tracker, Ntsako, set out to find wild dogs. Not only did we find wild dogs, but we spent a few happy hours with them as they patrolled the area before finding some shade and parking off. Happy me.

Christof, Ntsako, and I spent many happy hours driving the concession to give me a good idea of the Manyeleti landscape. We watched grumpy, smelly dagga boys (old buffalo males) wallow in mud, a demure female leopard silently and patiently hunt impala in the moonlight, rotund lions sleeping off a meal, and celebrated a rain squall that caught us as we sipped G&Ts and tucked into sundowner snacks.

And that, ladies and gentlemen, is the essence of Africa – you can choose your lodging based on your budget, but the real experience is out there where money means nothing, where exclusivity means enjoying beautiful moments away from the hustle of modern-day life.

I am not a fan of chasing the Big 5, or of ranking a game reserve by the species count. I did see the Big 5 in Manyeleti, and cheetahs, wild dogs, and many other species, but those sightings do not govern my personal ranking system. What excites me about Manyeleti is that the land is owned by the local community, who benefit financially, and is managed by Mpumalanga Tourism and Parks Authority as an integral part of the Greater Kruger.

Manyeleti, meaning ‘the place of stars’ in Shangaan, is a 23,000 ha community-owned private game reserve forming part of the Greater Kruger. Sharing unfenced borders with the private reserves, Timbavati to the north, Sabi Sand to the south, and the massive Kruger National Park to the east; Manyeleti is in prime Big 5 safari country.

For those familiar with the Kruger National Park, Manyeleti is close to the Orpen area and shares the same habitat of open grasslands and marula/acacia woodland. Aside from the Big 5, sightings of cheetah and wild dogs are a regular occurrence. The reserve has no perennial rivers or natural wetland areas, and so animals congregate at the waterholes and man-made dams in the reserve – ensuring excellent sightings.

Manyleti is owned by the local Mnisi tribe, who have lived in the area for many generations and who successfully claimed and won the land in terms of South Africa’s Restitution of Land Rights Act. Lodges in the reserve operate on a concession basis and pay concession fees to the tribe.

At the time of writing, an additional land claim has been lodged against the same land, causing anger and frustration amongst all parties concerned. Before the end of Apartheid in South Africa, Manyeleti was viewed as the game reserve for non-whites, located as it was in the then Gazankulu, a former homeland set aside for black inhabitants. Declared in 1967, the reserve received scant governmental support and few visitors, and even today is relatively undeveloped.

But the wildlife does not care about politics or commerce, and you will find that Manyeleti delivers wildlife sightings to rival its famous neighbours – but with far fewer people to enjoy them. The lack of investment into the reserve compared to the neighbouring private reserves of Timbavati and Sabi Sand has resulted in a far lower lodge and vehicle density – adding to the sense of solitude and exclusivity.

I am certain that more lodges will be constructed once the land tenure situation is resolved, and am hopeful that this will be done in a way that is of most benefit to the people of the area, for the foreseeable future.

Where to stay in Manyeleti

Pungwe Safari Camp is an intimate, comfortable, and authentic bush camp that brings back the essence of a real safari experience – the enjoyment of the wildlife, sounds and smells of wild Africa.  This off-the-grid rustic camp utilises solar and generator power for refrigeration (including ice), lights, and charging your devices and ‘donkey boilers’ (water boiled over a wood fire) for bathroom water.

Tintswalo Safari Lodge shelters under the shade of massive ancient sycamore fig trees on a seasonal riverbank in the northern reaches of the Manyeleti Game Reserve, Greater Kruger. The rather eccentric design offers a fusion of the great rock structures of the Monomotapa kingdom (think Great Zimbabwe) and colonial-era explorers, such as Speke, Livingstone and Burton. The nearby Manor House overlooks a waterhole often frequented by elephants and other large animals. 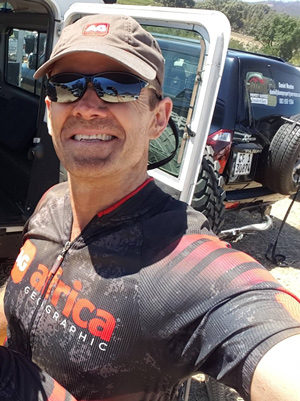 Simon Espley is an African of the digital tribe, a chartered accountant and CEO of Africa Geographic. His travels in Africa are in search of wilderness, real people with interesting stories and elusive birds. He lives in Hoedspruit with his wife Lizz and two Jack Russells, and when not travelling or working he will be on his mountain bike somewhere out there. His motto is ‘Live for now, have fun, be good, tread lightly and respect others. And embrace change’.