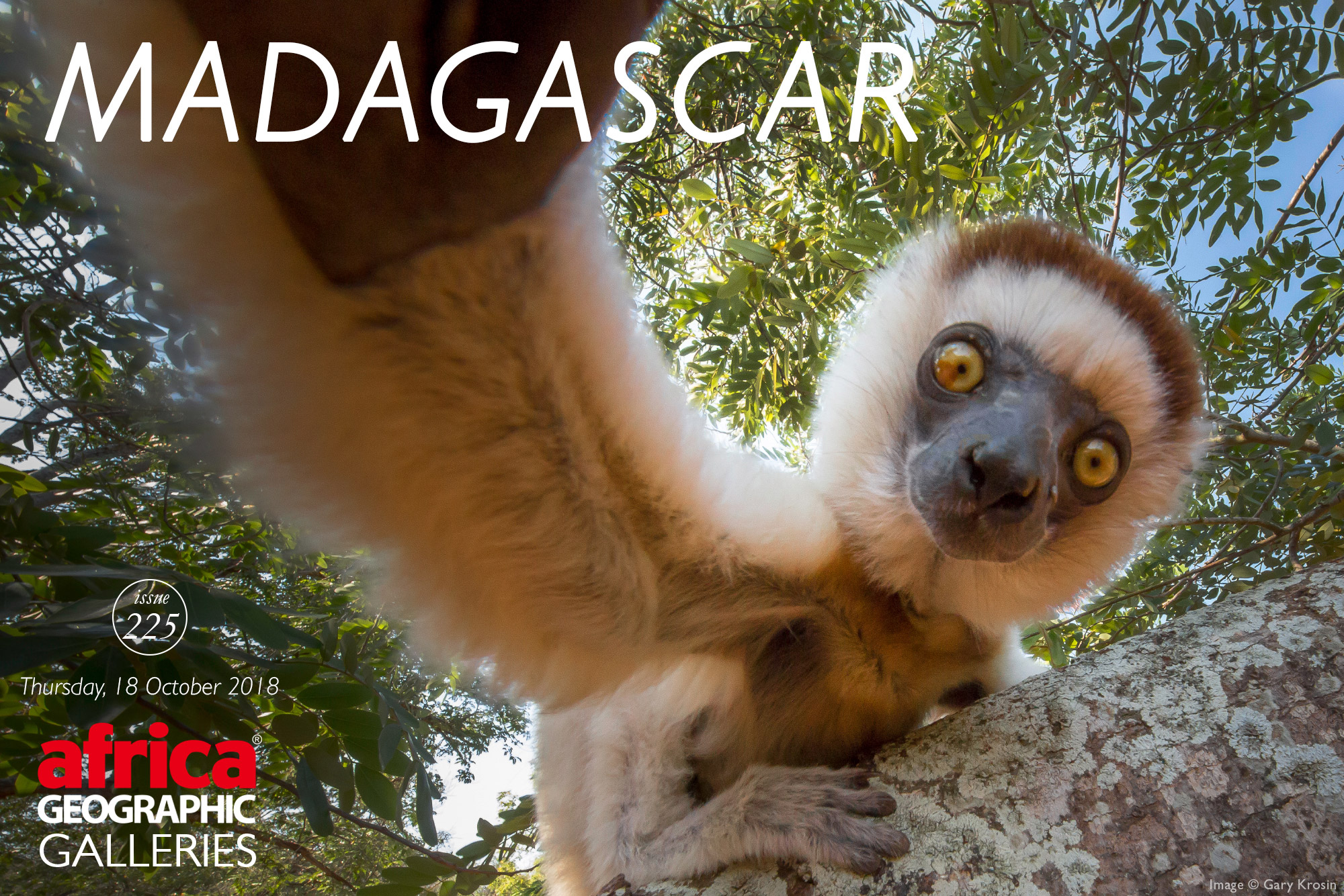 Fourth-largest island in the world, Madagascar is one of the most bio-diverse countries on Earth, home to thousands of species of plant and animal life of which about 80% cannot be found anywhere else on the planet. The fascinating uniqueness of this island has led some to class it as the world’s eighth continent. Incredible and colourful chameleons, eerie-looking fossas, tomato frogs, giant rats, oddly-shaped insects, and hedgehog-like tenrecs are just a few of the curious creatures that inhabit this exotic realm. At the same time, the country’s isolation for centuries has developed remarkable tree species, such as majestic baobabs. Madagascar is simply breathtaking, and a photographer’s dream come true.
So, without further ado, we present the gallery Madagascar, comprising of a selection of stunning photos taken in this unique country, along with interesting facts and some thoughts from the photographers themselves. And they’re not just any photos; they’re some of the special photos submitted during our Photographer of the Year 2016, 2017 and 2018 competitions. 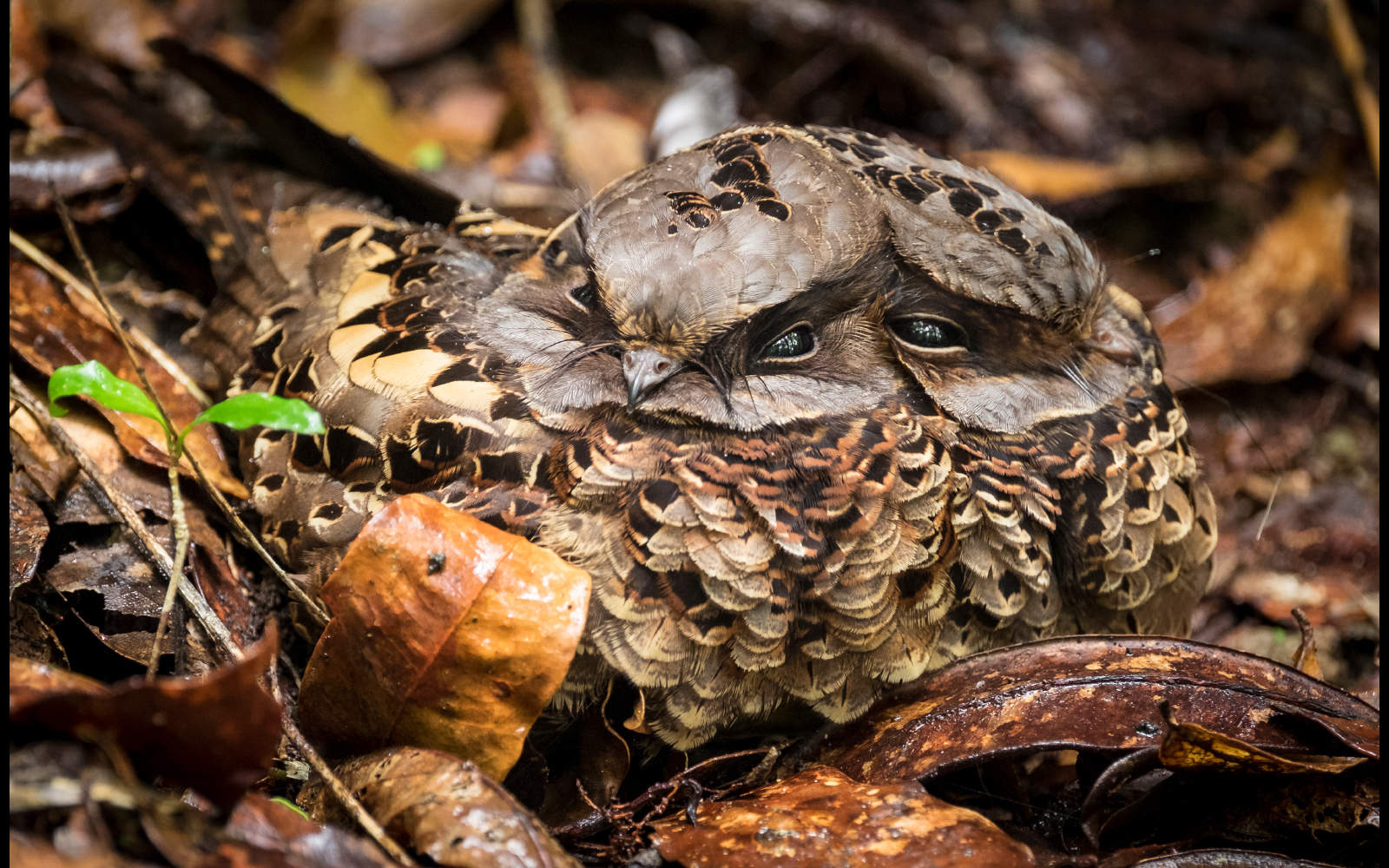 “This photograph was taken in the rainforest of Andasibe-Mantadia National Park. It was pouring with rain, but fortunately, I had decided to carry my tripod on the hike as it was far too gloomy for hand-held photography. Even when our guide pointed out the two birds, it was almost impossible to differentiate them from their surroundings. They rely entirely on camouflage and roost in open areas. Our guide pretended to have stumbled on them, but I suspect they roost in the same spot every day and he knew exactly where to locate them.” ~ Aron Frankental 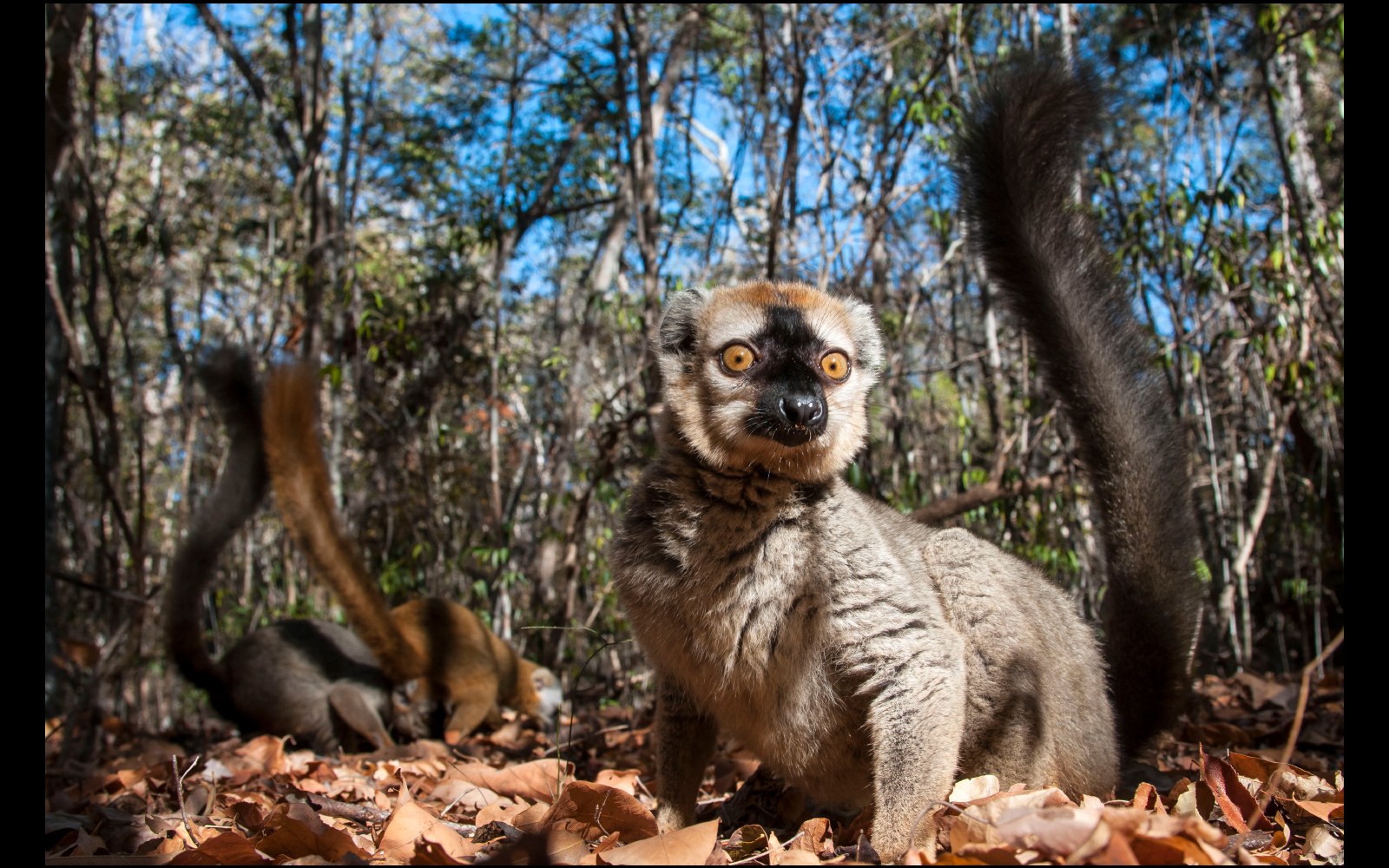 Brown lemurs eat mostly fruit, leaves and flowers, but also sometimes bark. They do not often drink, as they get most of the moisture they need from leaves. To feed, they pull a branch to their mouth and eat directly from the branch. They rarely use their hands to handle their food directly. 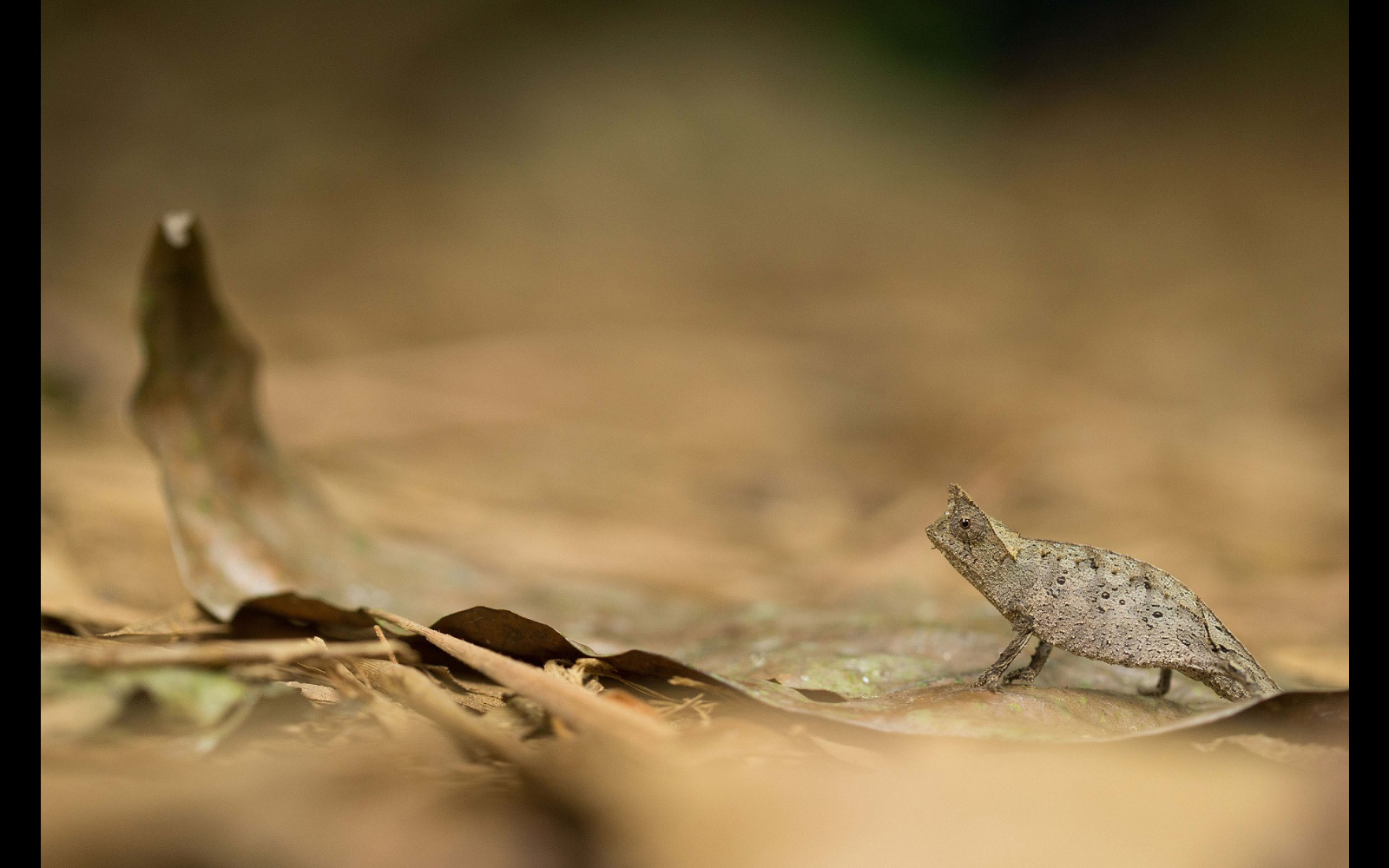 📷  A brown leaf chameleon takes a break while crossing a path in Ranomafana National Park, Madagascar © Alastair Marsh (Photographer of the Year 2016 Entrant)

The brown leaf chameleon (Brookesia superciliaris) is a small chameleon whose appearance mimics that of a dead leaf. It is found along the eastern coast of Madagascar, as well as the island of Nosy Boraha, and spends its days foraging among dead leaves on the forest floor. 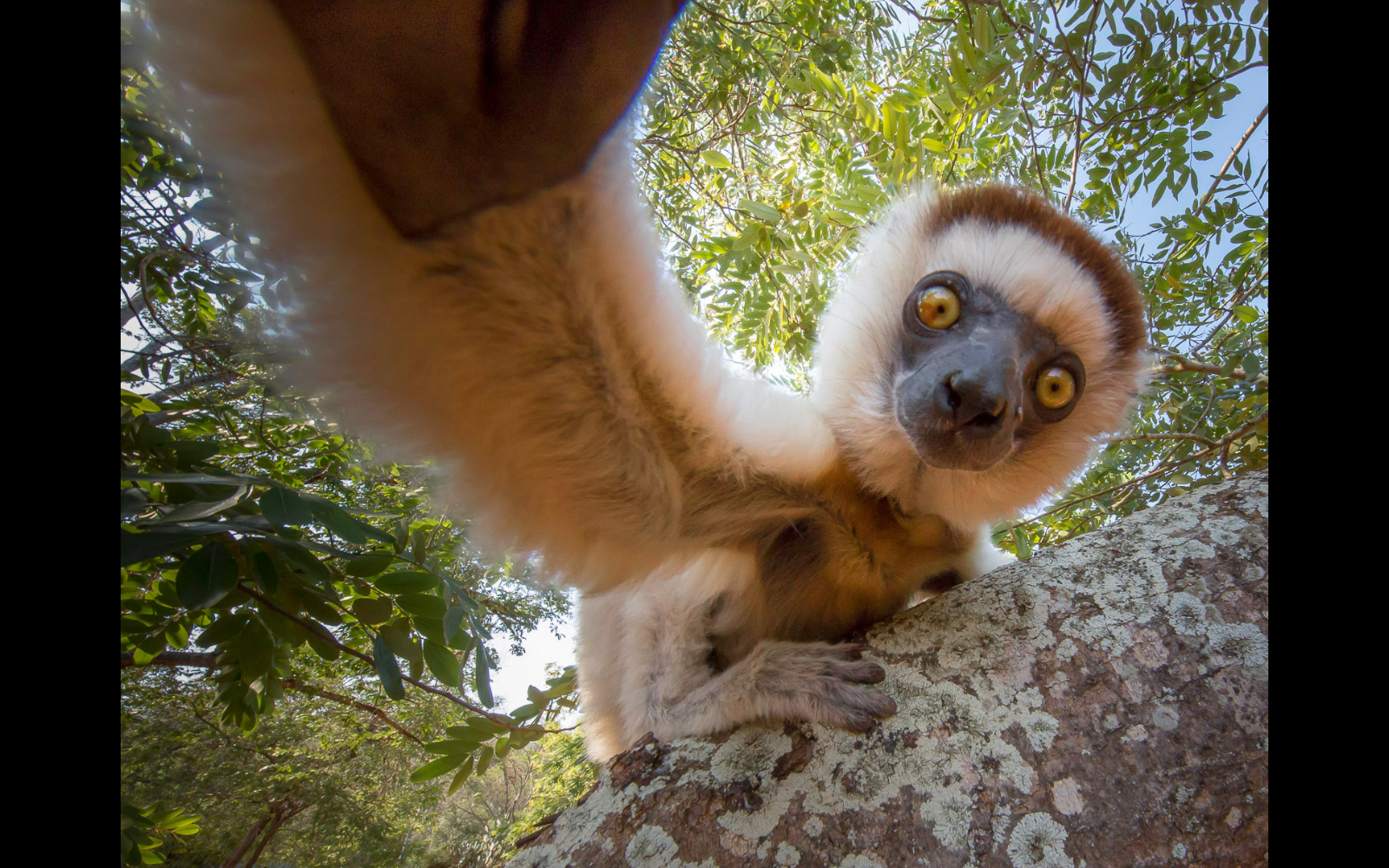 “I was walking along a path when I came across this Verreaux’s sifaka, which then became intrigued with my camera lens. He could see another lemur – actually his reflection – in the front, nearly hemispheric, glass element of my wide-angle lens. Since he thought it was another lemur, he carefully reached out to touch it.” ~ Gary Krosin 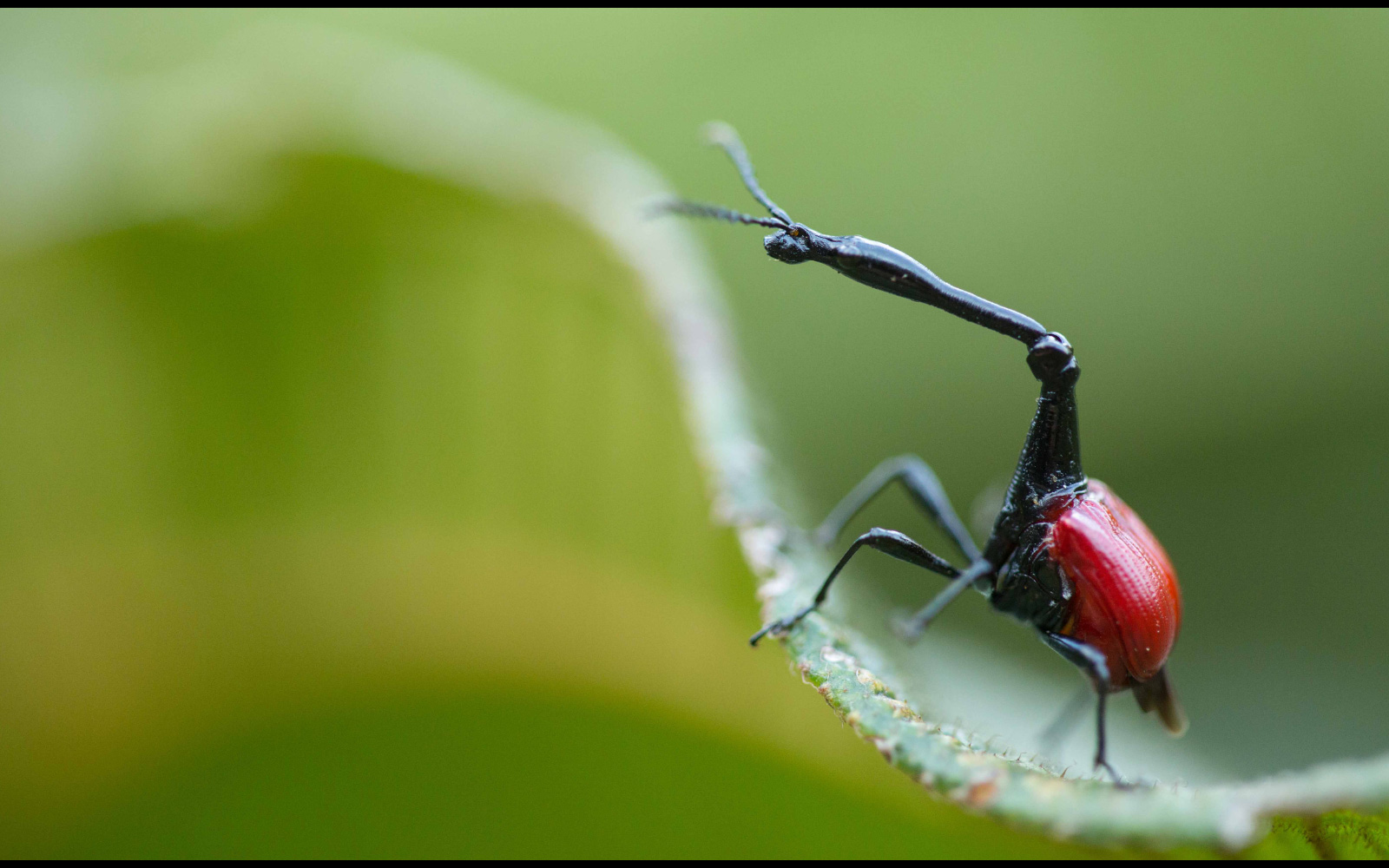 Giraffe-necked weevils are no doubt one of the unique insects on Earth. Endemic to Madagascar, they derive their name from an extended neck much like that of the common giraffe. The extended neck is an adaptation that assists in nest building. 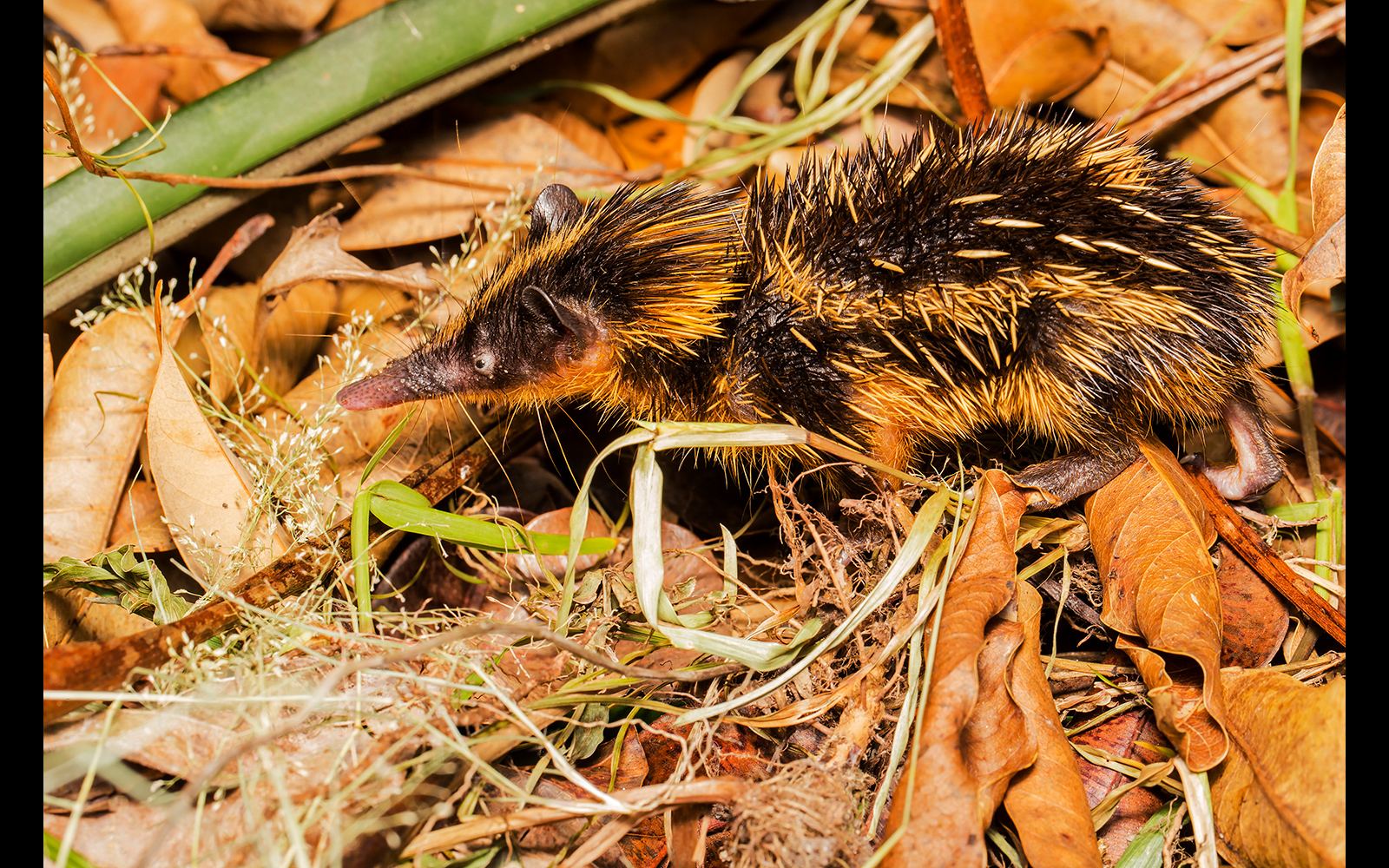 Tenrecs are little hedgehog-like creatures with spikes. As a result of convergent evolution, they resemble hedgehogs, shrews, opossums, mice and even otters. According to research, the various species of tenrecs on Madagascar evolved from one tenrec that washed ashore from mainland Africa millions of years ago. 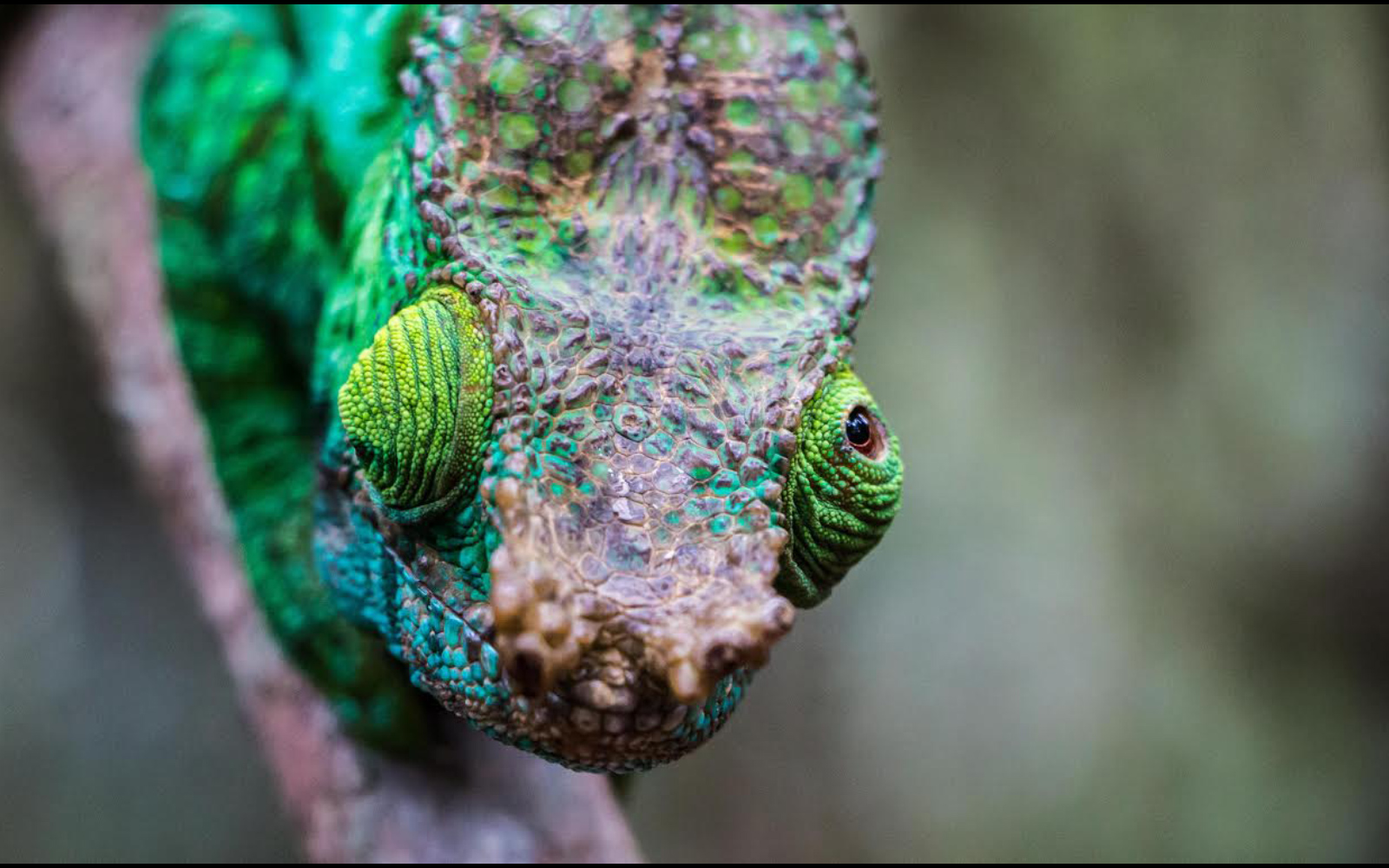 Madagascar is home to around 50% of the world’s chameleons. One hundred fifty species of chameleon inhabit the island, which has a diverse range of habitats, including desert and rainforest. Most of the island’s chameleons are forest floor dwellers, as opposed to arboreal. The Malagasy have some colourful expressions regarding chameleons, one of them being “Ratsy karaha Kandrondro” which translates to “ugly as a chameleon”. 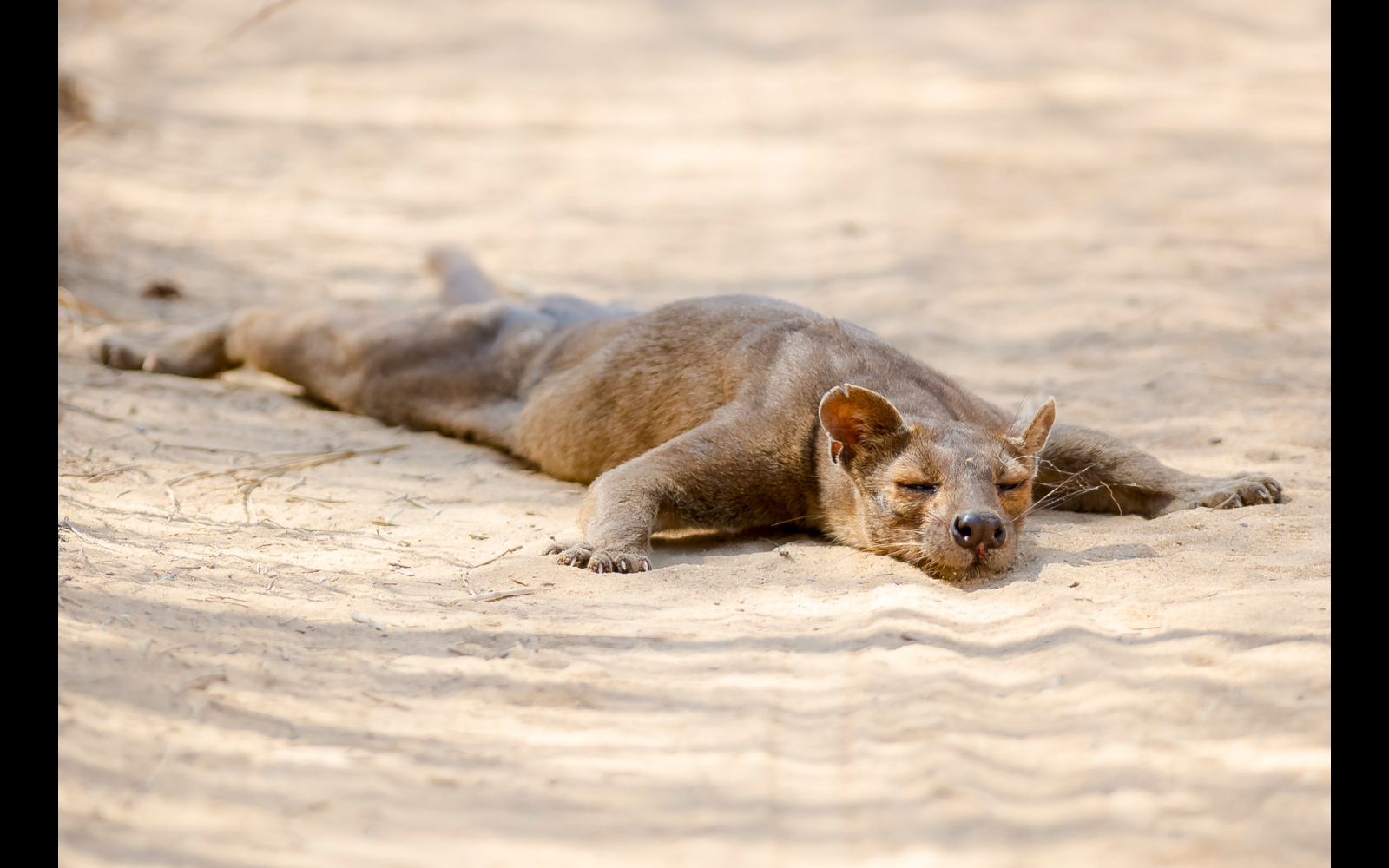 📷  Fossa having a hard day in Ankafarantsika, Madagascar © Frank Scheelings (Photographer of the Year 2017 Top 101)

“The fossa was walking along the track towards us and promptly decided to flop down for a siesta. He was completely oblivious, if not contemptuous, of us.” ~ Frank Scheelings – Read more interesting facts about fossas here 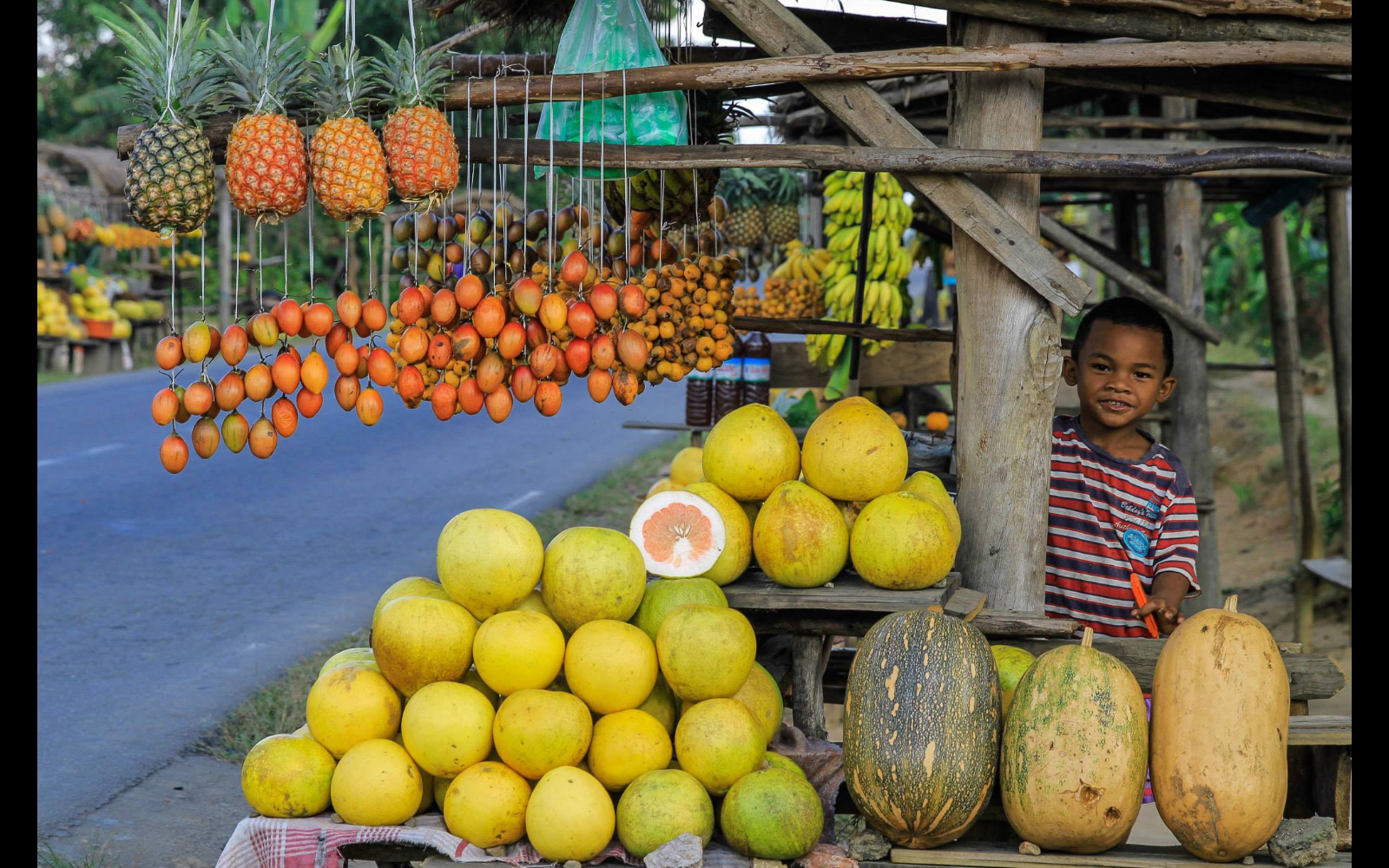 “With its unique landscapes, flora, and especially fauna, Madagascar is certainly one of the most exotic destinations that any international traveller could visit in their lifetime. The one thing that stood out for me on my trip was the kindness of the country’s people. I am usually quite shy about photographing people during my travels for fear of intruding, but this little boy was so proud to show me his family’s fruit stand, that I couldn’t resist. You can only imagine his face when he saw the photo on my camera’s display!” ~ Pedro Ferreira do Amaral 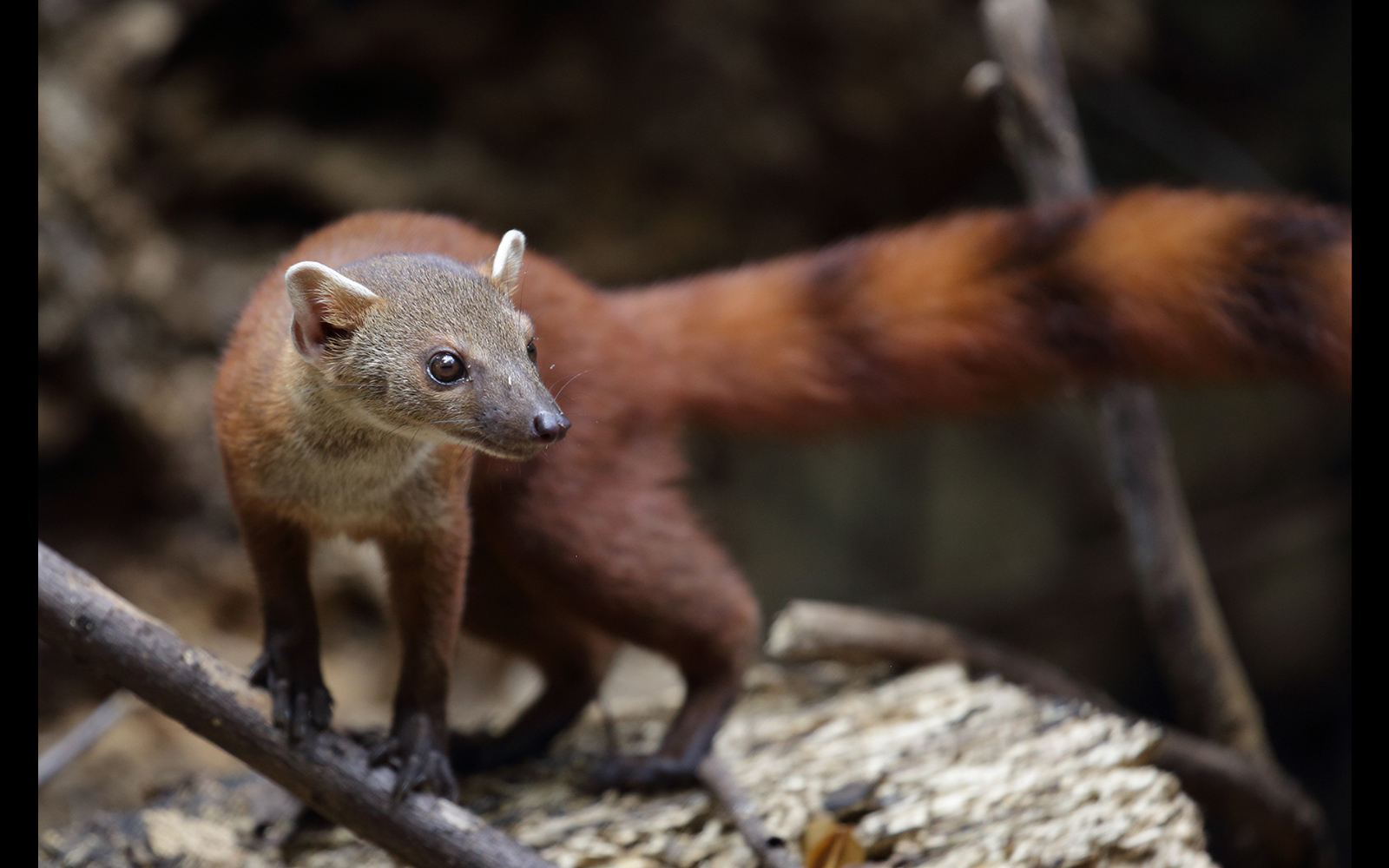 The most common, widespread and regularly encountered native carnivore of Madagascar is easily recognised by its bushy, ringed tail after which it is named. The Malagasy ring-tailed mongoose is the size and shape of a typical mongoose, with a low-slung body, short legs, small, pointed head and rounded ears. The pads of its feet are large, smooth and hairless providing it with remarkable arboreal agility. 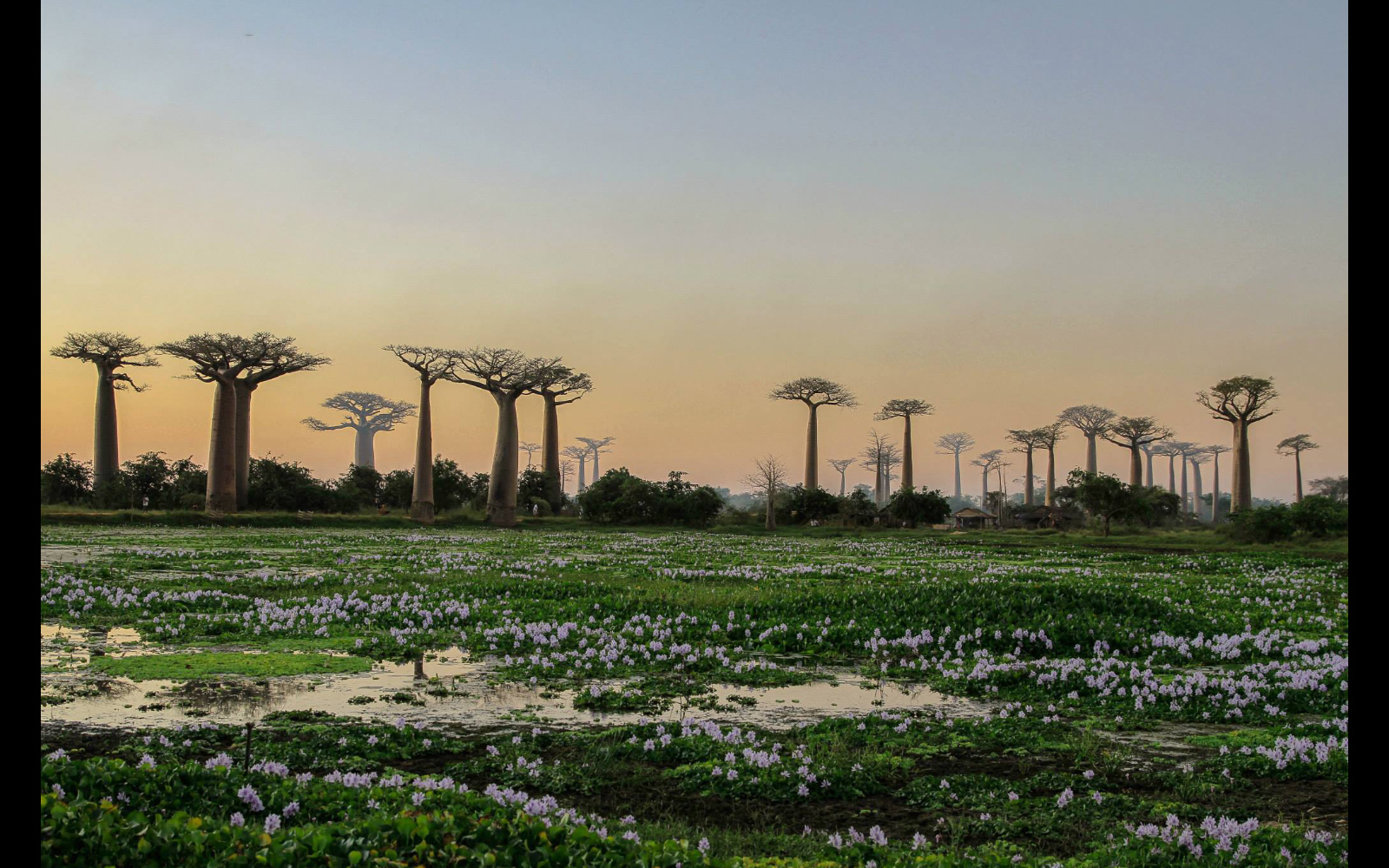 “When visiting the Allée des Baobabs in Madagascar one late afternoon, my biggest dilemma was where to position myself to photograph this mystical spectacle of colours, shapes, and scenery. The sun sets quickly, so I had to make the most of the occasion. After many shots of the backlit line of trees, and once the sun had already disappeared, I started to walk back for some final photos of this unique, baobab-flanked, dusty ‘allée’. That’s when I realised just how beautiful this water hyacinth- covered swamp with the baobabs and the purple sky in the background looked.” ~ Pedro Ferreira do Amaral 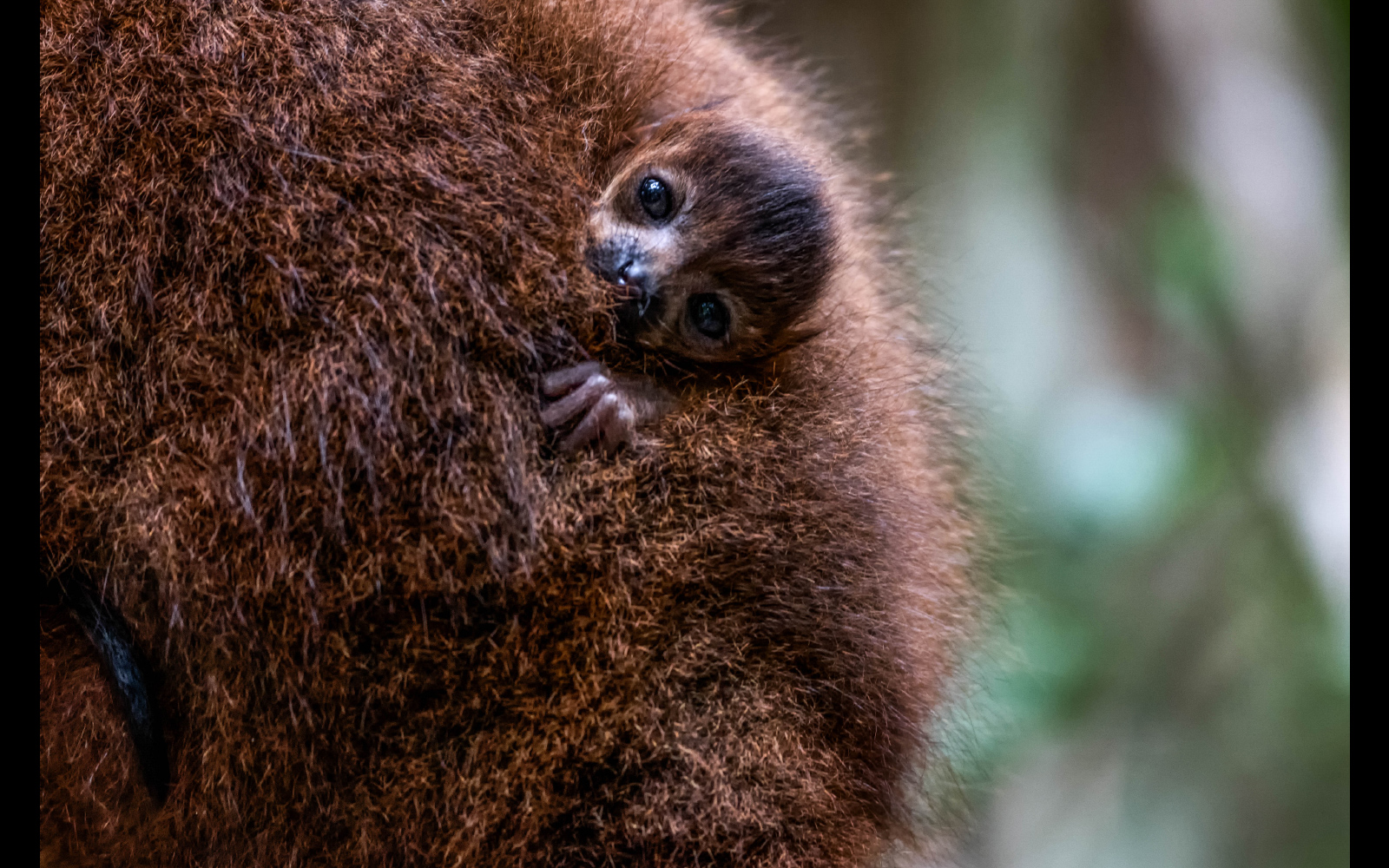 “During a late September visit to Andasibe-Mantadia National Park, this brown lemur allowed us to take a photo of her baby. The brown lemur is one of 101 species of lemurs in Madagascar and is considered to be a true lemur from the genus Eulemur.” ~ Gerrie Rall 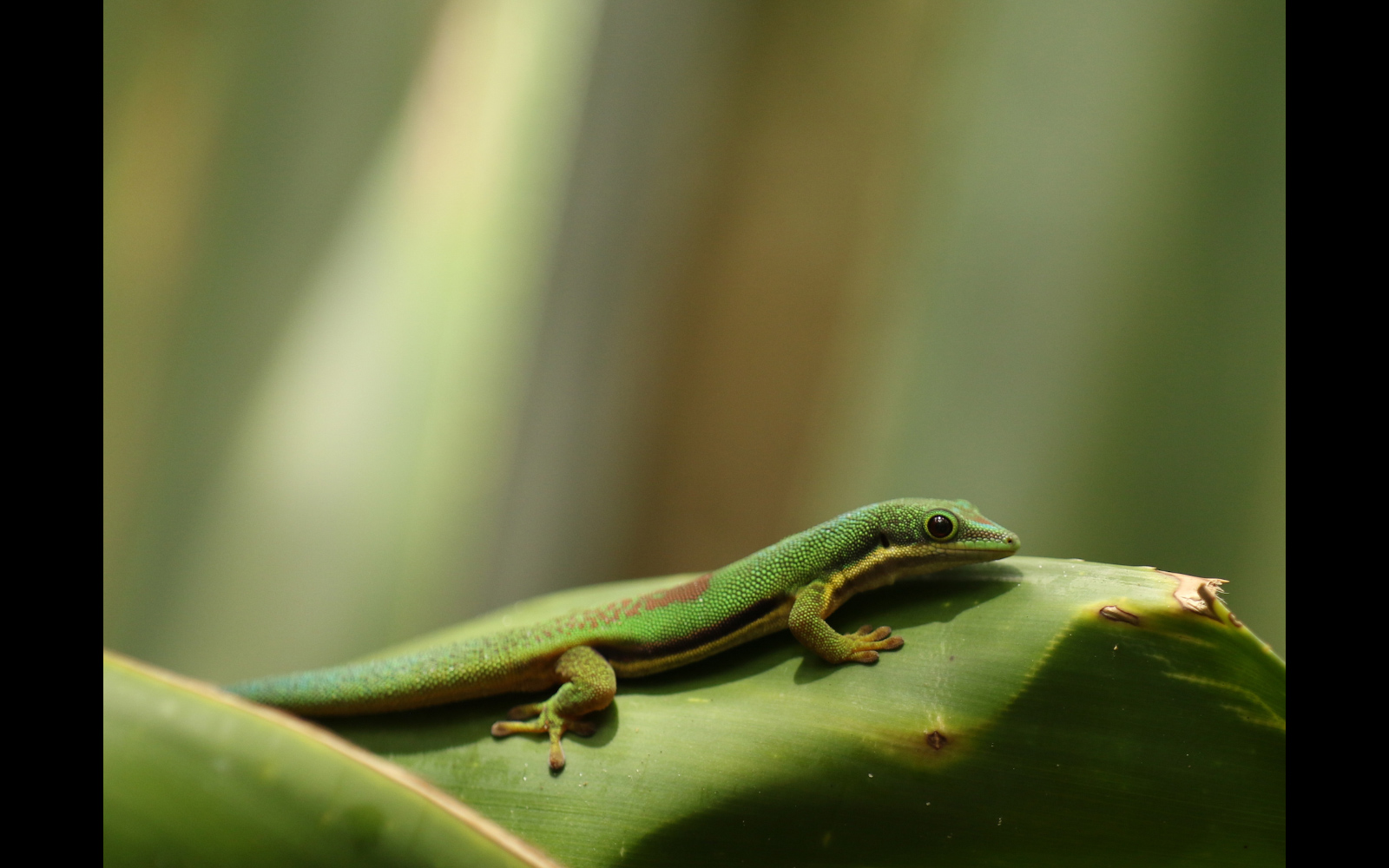 📷  A day gecko sunning on palm leaf after the rains clear in Andasibe National Park, Madagascar © Jennifer Vitanzo (Photographer of the Year 2018 Entrant)

The Madagascar day gecko is a diurnal subspecies of geckos. It lives on the eastern coast of Madagascar and typically inhabits rainforests and dwells on trees, feeding on insects, fruit and nectar. 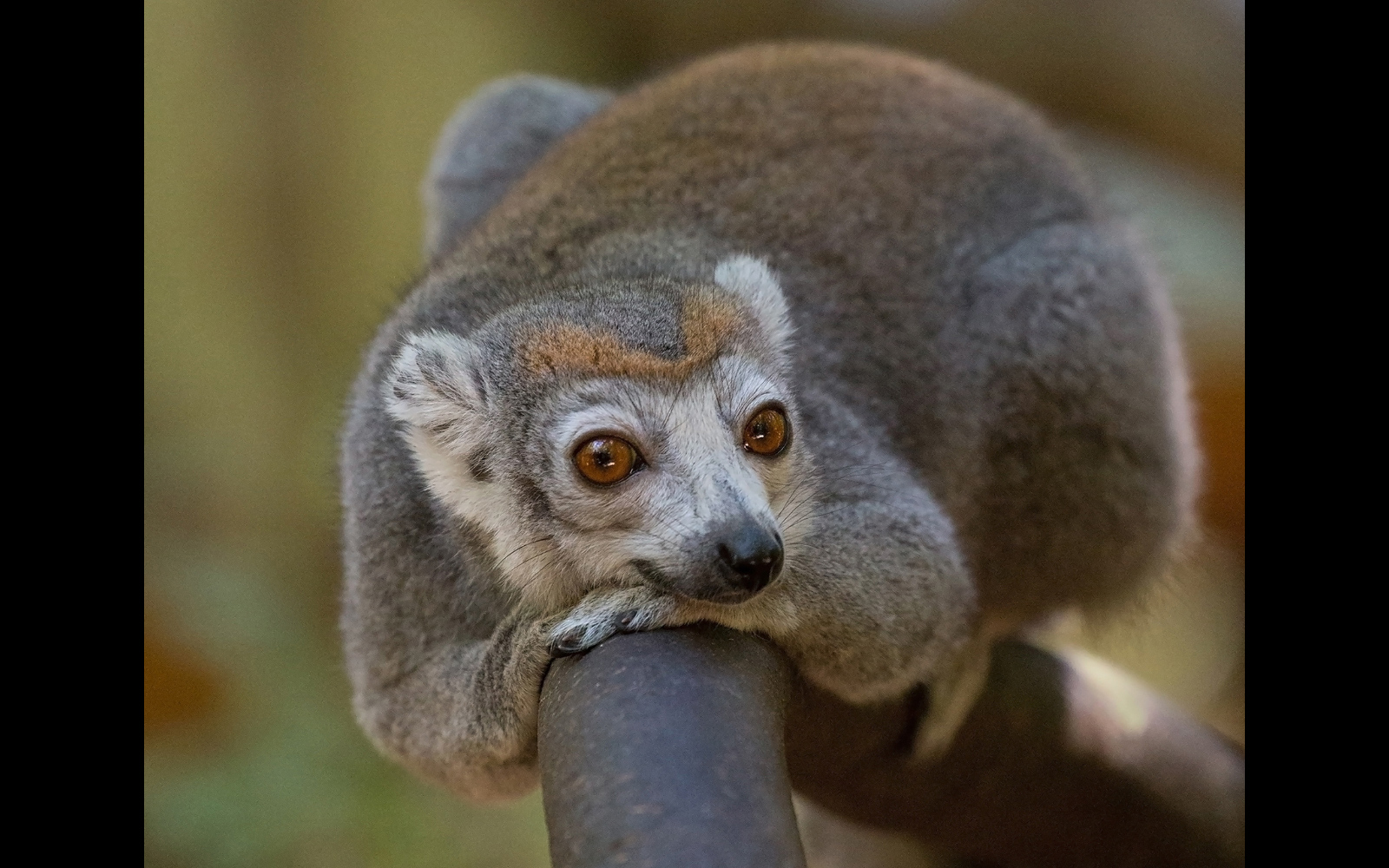 Crowned lemurs are mostly diurnal animals, which means they are active during the day time. They are only found in a very small area in the northern tip of Madagascar. They prefer dry, deciduous forests and mid-altitude rainforests. They are social animals, usually living in groups of 5 – 6 (at most 15) that are led by dominant females.

Madagascar’s summer (November – March) is considered the wet season. It rains throughout the island, although the arid west and southwest do not experience ma rains. January to March witnesses heavy rain and most parts of the country are difficult to get to as roads are muddy and become impassable. 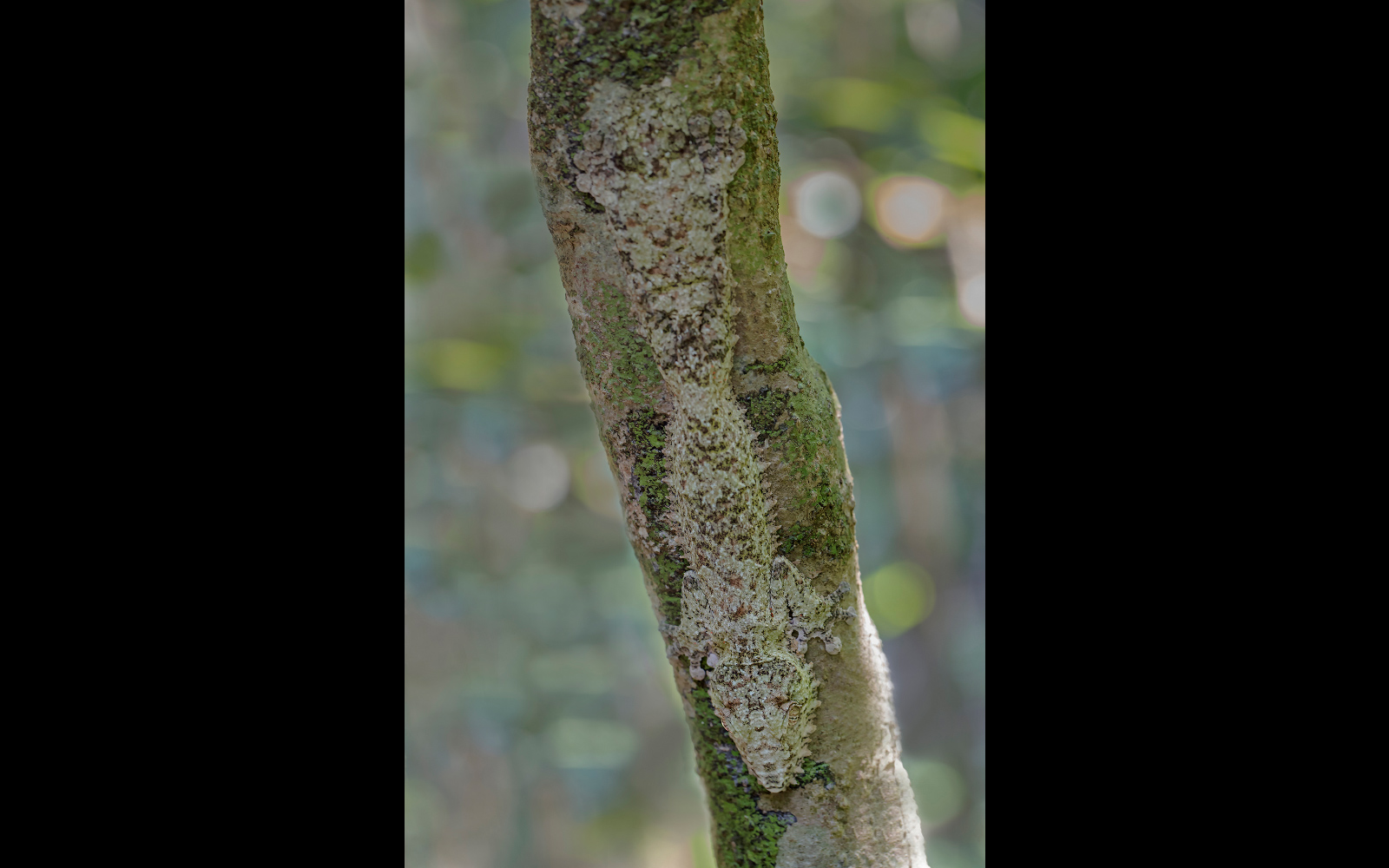 As their name suggests, leaf-tailed geckos are named after their broad, flat leaf-like tail. Their cryptic colouring and skin texture resemble tree bark and act as effective camouflage while basking in the sun amongst the branches. 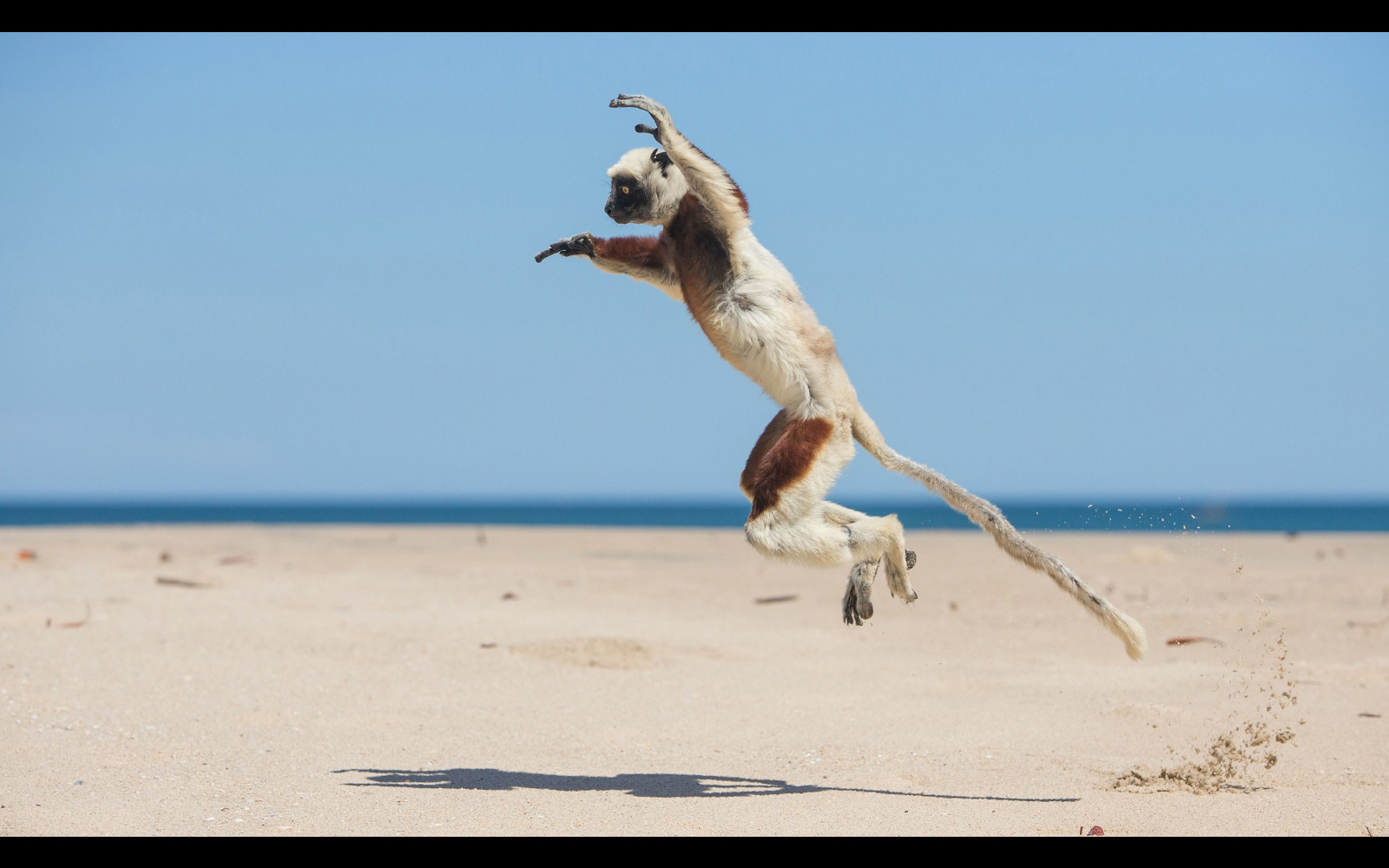 In a single jump, Coquerel’s sifakas can propel themselves more than 30 feet thanks to their powerful hind legs.