As the call of the bush baby fades and the first rays of the morning light start to dance, Suni has her foot soaked and cleaned and the shift change over begins at the Elephant Nursery Facility at Lilayi Game Reserve  in Lusaka. Working as a team of four, the keepers have a brief meeting with night shift to find out how the elephants have been during the night. With all things well, two of the keepers begin to walk off into the bush followed by six orphaned elephants bubbling with the enthusiasm of life. 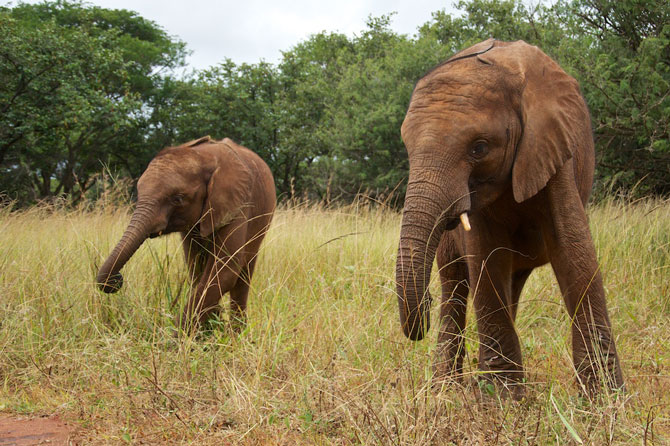 The two remaining keepers begin an intensive period of activity. Oliver, the deputy head keeper, begins milk prep, creating concoctions of goodness, to supplement the orphans with what they would have been receiving from their mothers. These feeds occur eight times a day. 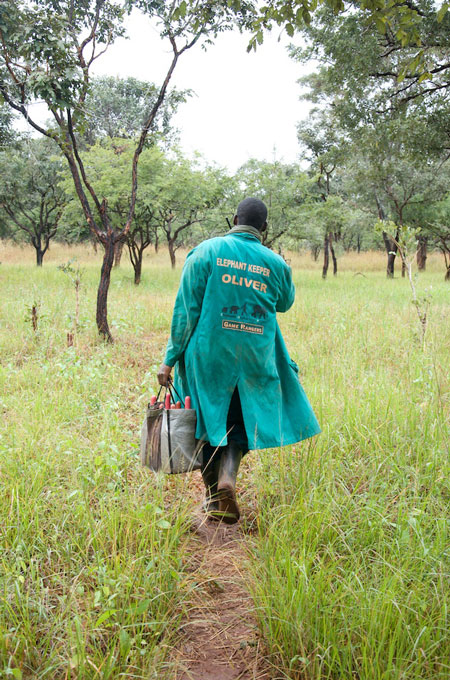 Meanwhile Elvis, the newest member of the keeper team, is busy mucking out the stables; elephants tend to go to the toilet every one to three hours! There is plenty to clean after ten hours or so spent in their stables as they rested through the night. 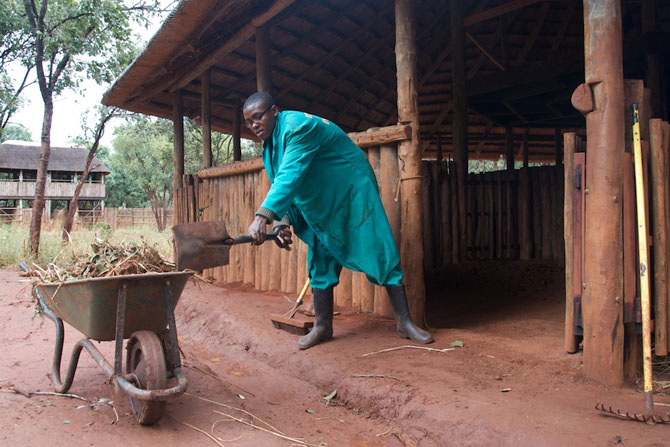 As day approaches the radio crackles and the location of the baby herd comes through to Oliver. With milk in hand, he starts his meandering walk, with Elvis cheerfully singing alongside. After about twenty minutes of walking, the quietness of the bush is interrupted by the high pitched trumpeting of excited little elephants. Seeming chaos becomes order as the keepers take control and the milk is guzzled with sounds of pleasure vibrating through the crisp morning air. Cheeky attempts by quicker-drinking older elephants to steal milk is quickly dealt with and they return to browsing. 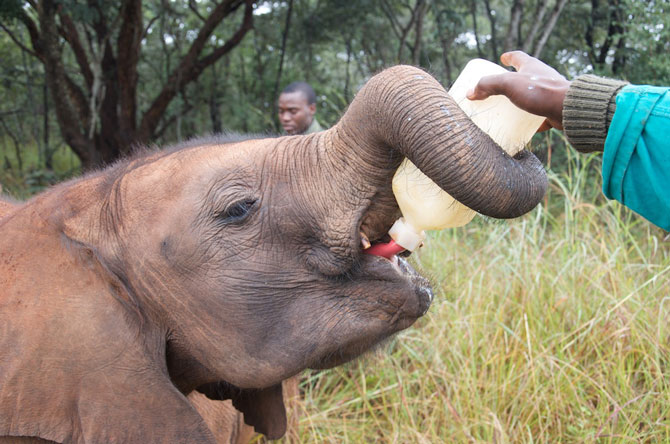 The keepers again part company as they lead the elephants back into the bush, however Maramba, the eldest of the herd, is happy to play his role in deciding which direction the best browsing area will be found. Elephants will eat over one hundred different food sources in the wild. 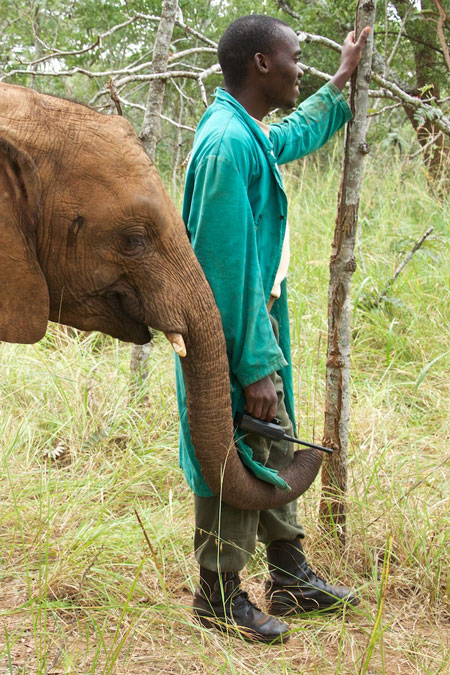 The youngest Nkala, sticks close to Kavala, often sucking on her ear for comfort as they move. 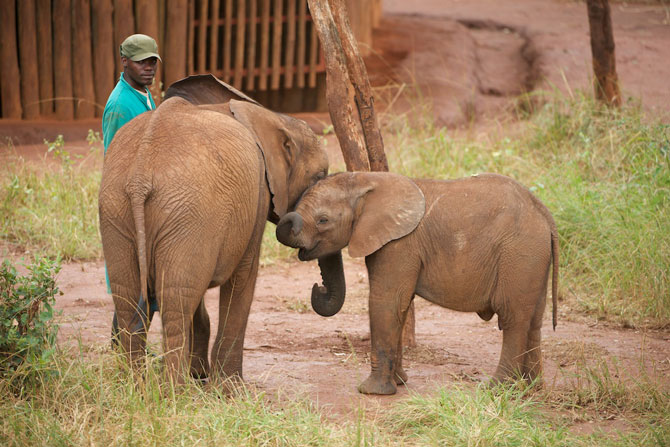 By now Oliver and Elvis have returned and the milk prep begins again, as the bottles are cleaned. Food is also collected and medical treatments are prepared for the elephants return. 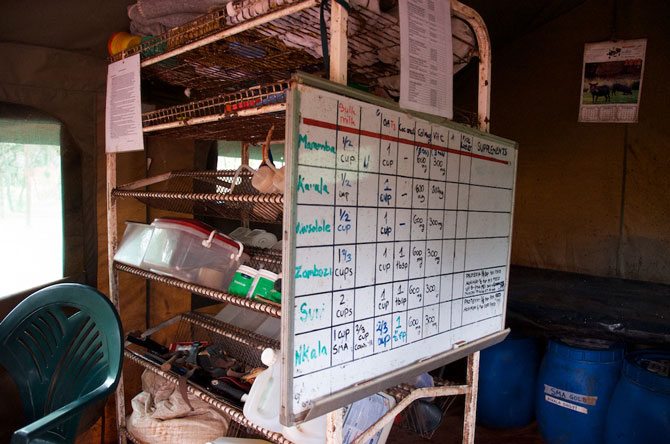 At midday the six excited elephants return from the bush. Undecided on whether the water or the milk is more appealing, they hesitate, before Suni leads the way, choosing the milk option. While the others continue to drink, Suni makes her way to the boma, with her unique swagger due the amazing boot that has been designed to help her in her recovery from the horrific axe injuries she endured from poachers two years ago. Once at the boma she settles down for the second of her three treatment sessions. Her boot is removed and the wounds are tenderly treated by Louise and Oliver. Meanwhile the rest of the elephants enjoy the water, but they never forget Suni, each taking it turn to check on her in the boma. 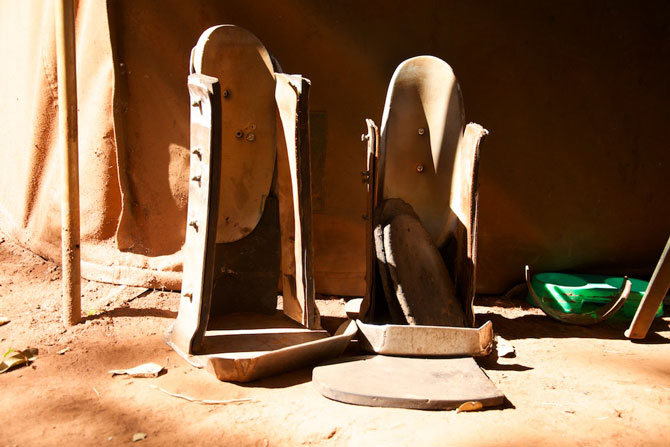 Back at the boma, the keepers each take their lunch in turn and prepare for a health check. Pulses are checked, Suni has her boot back on and the herd make their way back to the bush to browse, bumping into warthogs and giraffes as they travel.

As afternoon comes and goes another milk feed is given and food for the night is collected. Four of the team then turn their attention to Suni and her wounds are treated again, her night support is fitted, before she receives a neuro-skeletal integration massage to help stimulate her nervous system as she drifts off to sleep. By now twelve hours have passed and the night team take over. They continue to monitor from the boma observation deck, feeding the young orphans every three hours through the night as they snooze peacefully.

During this twenty-four hour period of care and support ninety-six litres of milk will be drunk, three bandages, twelve swabs, three litres of foot soak, three syringes, one metre of tape and three hundred millilitres of iodine will have been used, oh and approximately six kilometres will have been walked by the elephants and their keepers. 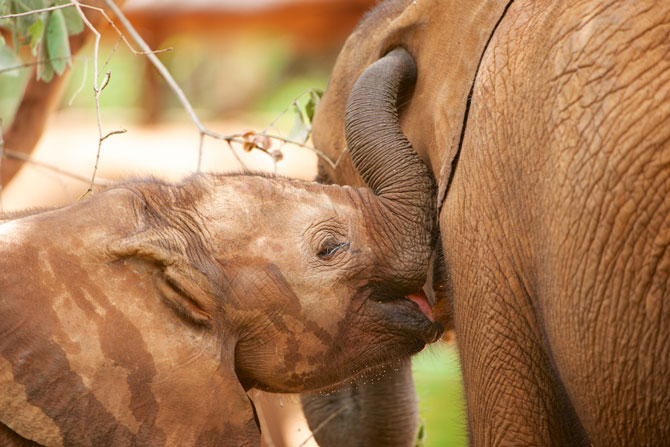 If you would like to more about the project and how to support, please visit www.davidshepherd.org or visit www.gamerangersinternational.org for information on viewings and talks at the Lilayi Game Reserve.

With a teaching background in physical education and geography, based in Canterbury, UK, and as an education advisor for the David Shepherd Wildlife Foundation, he has been travelling around Africa for the past 10 years, taking opportunities to support education and wildlife projects in Kenya, South Africa, Namibia, Zambia and Zimbabwe. Some of his highlights include diving with hammerheads in the Red Sea, trekking to see gorillas in Uganda, helping with white shark research in South Africa, assisting with anti-poaching and education projects in Zimbabwe and, most recently, supporting the work of Game Rangers International in Zambia. Between these projects, he leads school groups on adventure tours to South Africa and Nambia. My biggest project to date takes place in August 2013, when I and two cousins will cycle through Zambia in aid of the Elephant Orphanage Project, part of Game Rangers International and supported by the David Shepherd Wildlife Foundation.