Posted on December 28, 2020 by Gail Thomson in the Opinion Editorial post series.

I am indebted to three elephant experts for their input into this article.

Human-elephant conflict: Managing elephants in a landscape that includes rural human communities is a major challenge in countries where elephant populations are increasing as a result of successful conservation measures. Namibia, Botswana and Zimbabwe, in particular, must find ways to help their citizens living in rural areas to coexist with these great grey beasts that can be enchanting or terrifying, depending on your point of view.

In a previous article on the topic of elephants, hunting and coexistence with human communities, I pointed out that research findings on elephants must be balanced with the perspectives and needs of rural communities to make reasonable policies. Although the problems associated with human-elephant conflict were considered, we did not focus on addressing the conflict itself. In this article, we go a bit deeper into the role that research can play in managing human-elephant conflict. Namibia would benefit greatly from targeted research in this area that answers key questions for wildlife managers. If you are a student or researcher thinking about topics that can have real-world conservation outcomes, listen up.

The main issue I want to address is how hunting directly affects human-elephant relations in the areas where it occurs. Elephant hunting includes what is known in Namibia as problem animal control hunts, whereby specific individuals that frequently cause damages are killed. In terms of elephant behaviour, population numbers and demographics, all forms of hunting are likely to affect human-elephant interactions in some way. Figuring out what that effect might be and how hunting can be managed to improve human-elephant relations in the long term is a promising area of research. It is my hope that some of the questions below may spark the interest of Namibian researchers to delve deeper into these issues.

Human-elephant coexistence may be an unrealistic goal in areas where farm infrastructure was built when no elephants were present and the farmers living there see no direct or indirect benefits from elephant presence. Where coexistence is not possible in the short- or medium-term, options other than the ones presented here may have to be explored – like translocation or, as a last resort, culling. The research questions presented here are specifically for areas where elephant presence generates enough benefits such that reducing the costs associated with them can lead to human-elephant coexistence. 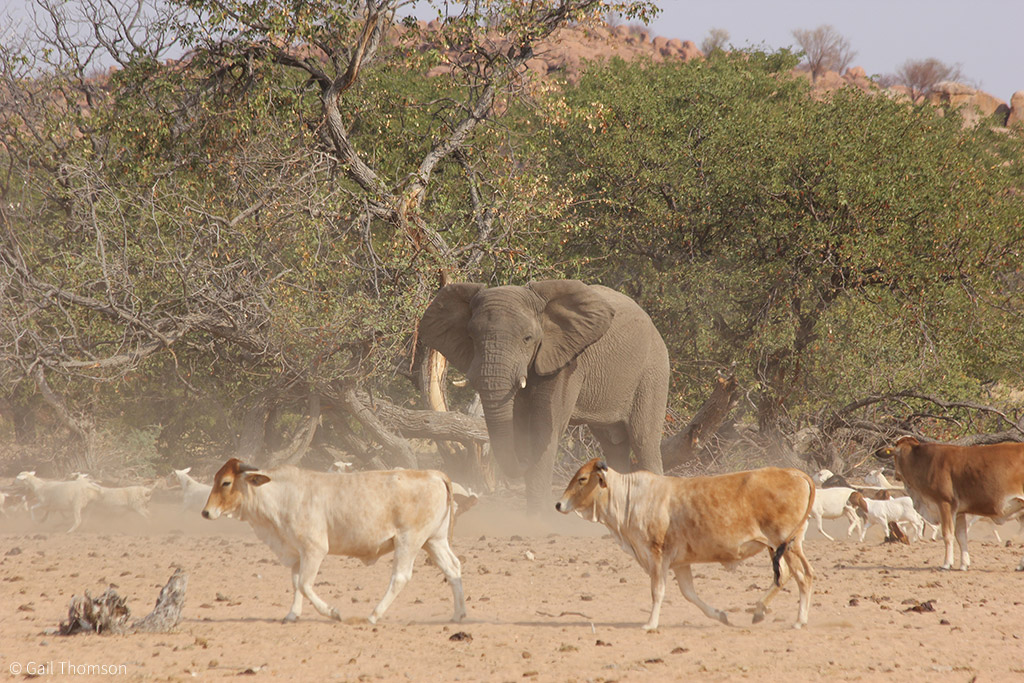 1) What effect does hunting have on long-term elephant damage?

Problem animal hunts, particularly, are meant to reduce human-elephant conflict. Research from Kenya reveals that male elephants cause more conflict (either in groups or as singletons) than females, and that some males can be classed as habitual crop raiders, while others only raid occasionally. Furthermore, habitual raiders may teach younger males their same bad habits. Removing habitual raiders from the population therefore appears to be a sound course of action for reducing conflict, at least in the short term.

With a long-term view, however, removing habitual raiders may just make space for other males to fill their shoes, thus not addressing the problem. Additionally, identifying habitual raiders is difficult, as many incidents happen at night and tracking a conflict-causing animal requires an extremely swift response to reports of damage that is not always possible. The question remains: if all else is equal (i.e. elephant and human density, habitat and agricultural practices), how does removing individual problem-causing elephants affect the long-term trend in human-elephant conflict? Conflict incidents and problem animal hunts are recorded in Event Books and through the hunting permit system, so this information can be used as a starting point for research in Namibia.

2) How does hunting influence elephant behaviour around people?

We already know that the total absence of older males leads to younger males becoming unusually aggressive to humans and other species. It is also possible that elephants that witness a hunt could become aggressive due to increased stress levels, but solid evidence for this is lacking. On the other side of the coin, there is increasing research on using a landscape of fear to reduce conflict with humans by using the animals’ instinctive desire to avoid risk.

An animal’s landscape of fear is based on their life experience and lessons from their parents (or others in their social groups) that tell them which parts of their environment or times of day are more or less risky. This is very similar to the way we decide how to move around our cities based on crime levels that we have experienced or heard about through our social circles. Theoretically, at least, one could manipulate the elephants’ landscape of fear to reduce the number of individuals willing to approach a village or enter a crop field (risky spaces), while encouraging their use of wildlife corridors and protected areas as safe spaces in the landscape.

The research challenge is to figure out how hunting contributes to either exacerbating the problem through increased elephant aggression or reducing the problem by creating a landscape of fear. Detailed records of all elephant hunts (for any purpose), followed by behavioural studies of affected elephant groups and supported by Event Book data would help us to understand the link between hunting and elephant behaviour. This understanding can be used in turn to create hunting guidelines that will limit human-elephant conflict. 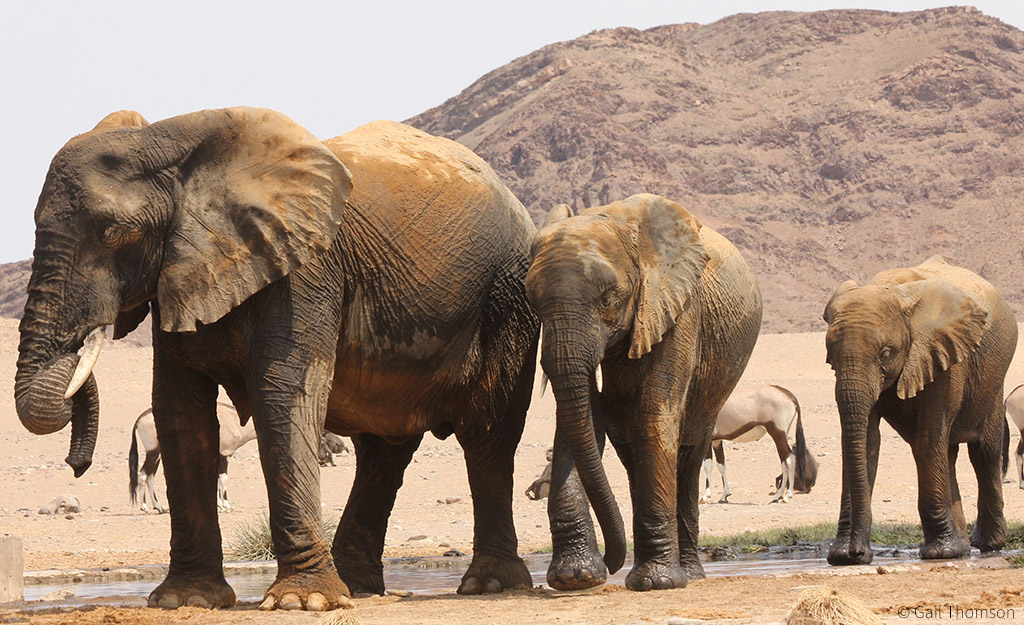 The two questions above reveal that there are some uncertainties regarding how hunting can be used to reduce human-elephant conflict in the long term. When these questions are answered, lethal control must be considered alongside the non-lethal options for reducing conflict. Protecting crops and water installations at conflict hotspots should reduce the need for lethal control over time. Non-lethal elephant deterrents (e.g. burning chilli bombs or applying chilli oil to fences) could be used alongside occasional hunts to maintain and reinforce the landscape of fear around villages and crops.

One of the key drawbacks of implementing long-term non-lethal control methods is the cost. Some options can be installed using external funds, while others come at a cost to individual farmers (e.g. paying for diesel to pump water that elephants drink). In some cases, an external party makes the initial investment, but on-going maintenance is left to the farmer. By contrast, the meat of a hunted elephant is distributed among the affected people and the hunting fee may be used to offset losses incurred. Lethal control may therefore be a more attractive option for those who suffer the direct consequences of elephant damage and are expected to implement non-lethal methods (at least partially) at their own cost.

The effectiveness of non-lethal methods should be subjected to the same level of scrutiny as lethal methods, particularly to determine its long-term effectiveness, cost and practicality in the field. A method that relies solely on investment of the farmer’s time and money is unlikely to win more support than bringing in a hunter to deal with a problem animal. For any given non-lethal control method introduced into a community, we need to know how well it worked over what period of time and whether or not the farmers feel that they could integrate the method into their day-to-day lives.

Experts in human-wildlife conflict know that this particular field of science is even more influenced by human factors (e.g. relationships) than other areas of science. Coexistence with elephants is like a giant puzzle that involves turning over many important pieces through research and experience. The pieces we focused on here include the direct links between hunting and human-elephant conflict, yet the indirect links can be just as important. These include political willpower, historical context, local culture and benefits derived from elephants. While research can provide some important puzzle pieces, it takes people from a diverse array of stakeholders to solve the puzzle itself.

Solving the puzzle of human-wildlife conflict requires trust, communication and a willingness to listen and learn. If research results are used to try and force people to adopt certain ideas or methods (even if they work), they are almost guaranteed to fail. Alternatively, research can be part of a collaborative learning process whereby everyone is involved in identifying the right questions, developing sound methods to test possible solutions and discussing the results. If you have been inspired by these research questions, remember to include others in your search for answers.