Posted on May 4, 2016 by Jeremy Goss in the News Desk post series.
ShareTweetPinEmailShareShareLinkedIn

Some scenes rock your sense of reality. Especially when trying to comprehend something that you’ve never seen before, and probably never will again. Your brain tries to take it in, process it, and inevitably fails to relate to any particular emotion. This was what I experienced on the 30th of April in Kenya during THE IVORY BURN.

We were informed that 105 tons of ivory and 1.35 tons of rhino horn were set on fire. According to the Kenya Wildlife Service, it was done to send out a strong message “that it will never benefit from illegal ivory and rhino horn captured from poachers or seized in transit,” as well as to illustrate “a zero-tolerance policy and laws against poaching and illegal wildlife trafficking.”

An ivory burn on this scale is without precedent. It was a spectacle, and there was no real chance for quiet contemplation of what it all meant. What follows is not a discussion of burning ivory’s pros and cons, but rather an attempt to tell some of the day’s story in pictures.

Everything was grey to start. The skies, the mood; there was an expectation of rain. 11 pyres of ivory stood quietly alongside a metal cage full of rhino horns in Nairobi National Park. The orange vests of the staff were a welcome colour and their stature helped to understand the size of the piles and individual tusks. The crowd was modest – a mixed bag of local and international media personalities, politicians, government representatives, and conservationists from all walks of life. There were not many children, but the two in the below photo were clearly excited to be there. I noticed one interviewing a ranger and scribbling on a notepad, and hopefully, she relayed the story to a younger audience. The burn certainly had the desired media impact. The site buzzed with the sound of camera clicks and the background babble of interviews being conducted. Social media picked up the message as well, tied together by the hashtag ‘WorthMoreAlive’. As the crowd awaited the arrival of the dignitaries, including President Uhuru Kenyatta of Kenya and President Ali Bongo of Gabon, something interesting happened. A flock of yellow-billed kites arrived overhead, wheeling above the stacks of ivory. It is possible that they recognised the likelihood of death and an easy meal of meat associated with the ivory. Ivory is not flammable so it needs to be burnt with massive amounts of fuel. After President Kenyatta lit the first pyre, I expected a big ‘whoosh’, but it happened slowly; the flames leaping higher as more fuel was injected. The wind was blowing gently and the ivory pyres would come and go as the smoke billowed out. 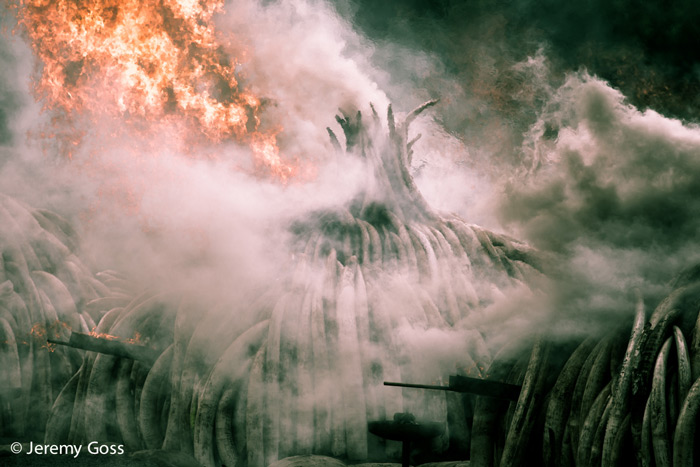 The amount of ivory burning was overwhelming. People jostled for the best view, and the muddy earth sucked my gumboots down with each step. I was looking for something that would hold my gaze for more than a second, a visual anchor in the chaos. And there it was, obvious even from a distance – a small ivory carving standing white against the smoke-blackened tusks on which it rested. The raw material and final product burning together, separated by an ocean on any other day. Since the burn I’ve seen lots of images featuring a steely looking ranger and a big fire. I, of course, have one too because it’s an important image. These men and women represent the frontline in the fight against poaching, and the more the world knows of their efforts the better. Strangely there was no smell, the wind blowing the smoke across the front of the crowd. As the afternoon went on, the sun shone brighter; the light always changing and with it the atmosphere. 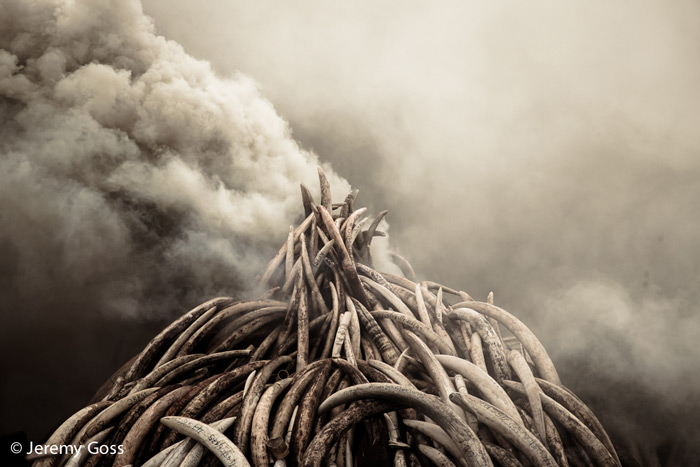 Ivory stole the show at the event, but there were also 1.35 tons of rhino horn that went up in smoke. Despite fewer numbers of rhinos than elephants being killed each year, these deaths represent a greater proportion of the total rhino population. 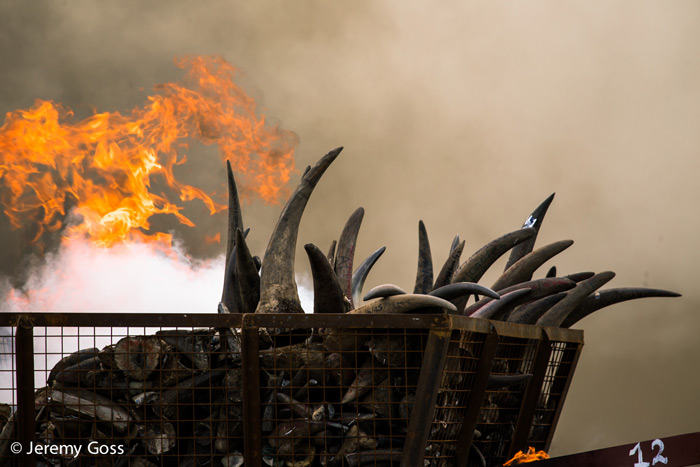 Ivory doesn’t turn to ash easily. The fires were anticipated to burn for many days; the remaining ivory was re-stacked a number of times. The flames leapt high long into the evening on day one, and as the natural light faded, the scene took on an apocalyptic feel, perhaps suited to the situation. Eventually, I walked away, still trying to process what I had seen but still not succeeding.