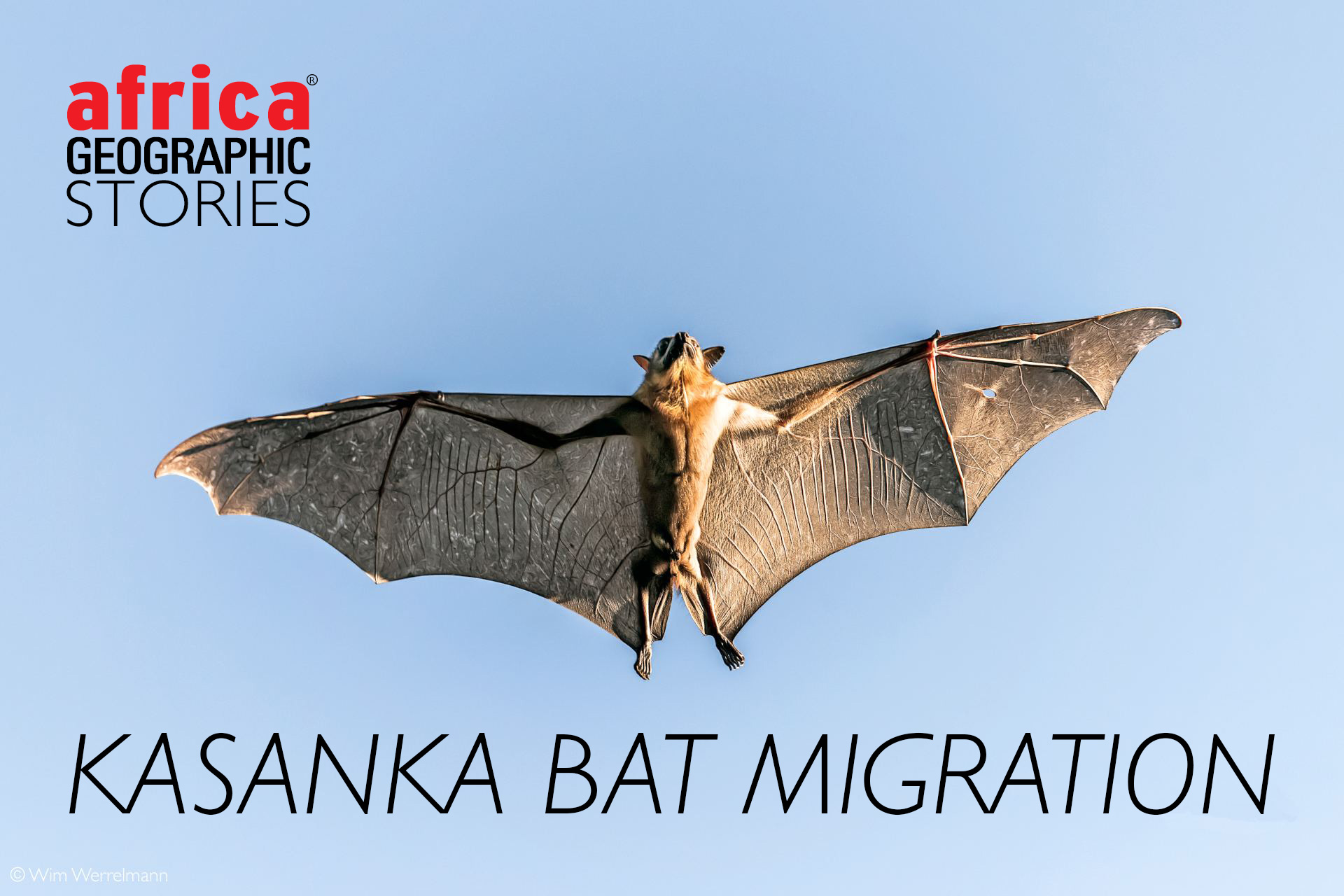 It’s the end of November, and there are at least 8 million straw-coloured fruit bats (Eidolon helvum) filling the skies at eye level as we perch in our tree-top hide. The annual Kasanka bat migration – the planet’s largest mammal migration – has arrived. It is one of the natural world’s best-kept secrets, and for years this startling sight remained virtually unseen by African travel enthusiasts. It is an animal carnival to astound the senses.

At 3:45am I emerged from my room, rubbing sleep from my eyes, coming face to face with a tiny lesser bushbaby, who stared at me, unblinking with surprise, gripping the spindly branch of a small tree overhanging the deck in front of our room. I’m not sure who was more startled. The bushbaby was simply doing what bushbabies do in the early hours of the morning. I, on the other hand, instead of being tucked up in bed, was off to see millions of fruit bats returning to roost after a night of foraging.

Between October and December each year, the bats descend into a tiny patch of evergreen swamp forest inside Kasanka National Park, northern Zambia. The African straw-coloured fruit bat is the second-largest fruit bat on the continent, can have a wingspan up to a metre, and the adults weigh up to 350g. They come to feast on the pod mahogany, musuku, mufinsa, milkwood1 and other wild fruit that appears with the first rains. Scientists are not entirely sure where these bats spend the rest of the year, though they do know that for some of them, it is somewhere deep in the rainforests of the Congo. The bats in Kasanka are at all different stages of the breeding cycle, with some mating, some in various stages of pregnancy, and some with young. It’s known from observation of individual colonies around Africa that these bats are seasonal and synchronise their breeding within the colony, so the diversity seen in Kasanka implies that they are coming from various areas.

Eidolon helvum are predominantly recorded around the edges of equatorial rainforests, but no-one knows as yet if large colonies live deep inside the rainforest. The ecological implications of 3,500 tons of flying mammals arriving over a three month period are profound. Researchers from the Max Planck Institute of Animal Behaviour, who visited in 2019, say they are yet to fully explain the sheer scale of the Kasanka bat migration. Researchers indicate that the number of bats is far greater than the sum of individuals in all known colonies within several thousand kilometres. So it would seem that Kasanka’s special significance to straw-coloured fruit bats is a question that science is not yet able to answer. Hopefully, ongoing satellite tracking research will yield further information on both their migration routes and the species as a whole. While this incredible spectacle is not typically at the top of the traditional safari traveller’s bucket list’, it is a unique experience.

We arrived at Kasanka the previous evening and almost immediately headed to one of the park’s bat hides. We held tightly to the 13m of wooden handrails that wrapped around the trunk supporting the wooden viewing platform. Thirteen metres is not really that high, but it certainly gave a spectacular perspective of the area. Three white-backed vultures perched in a nearby tree. Catching sight of them, my husband, who is not fond of heights, commented that they looked like they were waiting (in vain) for us to plunge to our deaths! A beer for him and a G&T for me restored our equilibrium. We waited and watched as the sun sank.

As the sky turned orange and lightning streaked the sky in the far distance, in a hectare of forest below, the tree silhouettes began to tremble – the bats hanging from their branches started to wake. The branches were so tightly packed with bats that some of them, unable to grasp the branches, were left clinging to their neighbours.

As dusk fell, they fluttered off in search of wild fruits, their large, leathery wings filling the air with loud rustling and heavy flapping. As the flock took to the sky, the drooping branches of the bat forest lifted back into place. The bolder bats took to the air first, followed in fits and starts by the rest of the colony. Some headed out, then, appearing to change their minds, turned back, only to try again a few minutes later. The sky was soon filled with chatter as the bats darted in and out of the trees, in a cloud-like mass resembling a giant swarm of overgrown bees.

We waited in our treetop eyrie until it was almost too dark to see the ladder down. By then, the sky was empty; the bats had vanished. The sound of thunder drew closer as we felt our way back down the ladder and, by the light of torches, made our way back to the vehicle. Fat drops of rain began to fall as we drove back to camp.

When morning came, it was only me, the bush baby and my guide Ruston, who seemed to be awake. My husband snored contentedly from under his bed covers. After hot tea and biscuits, I climbed onto the back of the vehicle, wrapped myself snugly in a blanket, and we set off for the tree hide in the bat forest. It was still dark as we walked through the forest with torches in hand, the bats fluttering and feasting in the waterberries above our heads – last-minute snacks before sunrise. As day broke, the bats returned to roost. It was like watching a film of the previous night’s action in reverse but even more breathtaking. Vivid splashes of scarlet, tangerine and gold lit the sky, silhouetting the bats like prehistoric pterodactyls as they flocked, in droves, back to the colony.

They tumbled into the trees pushing, shoving and clambering noisily over one other to find a space to sleep during the day. The area became so overcrowded that I could hear the occasional snap of a branch and then squeaks as a few fruit-bloated Eidolon helvum plummeted, ungracefully, to the ground. Finally, one by one, they settled, and silence descended over the bat forest again. We headed back to camp for breakfast.

Researchers have found that most of the females in the colony are either pregnant or nursing pups during their migration to Kasanka. The abundant fruit helps support the increased energy they require. They gorge themselves on seasonal fruit, one study finding that they eat up to twice their body weight in a night. By the time they depart Kasanka, the bats will have consumed over a billion fruits! All this provides them with the reserves needed for their long migrations across Africa. No wonder the branches strain and crack under their combined weight, and why, at the end of the bat season, the forest they leave behind looks rather dilapidated.

Even now, scientists don’t really know exactly where the participants in the Kasanka bat migration come from and where they go. At roughly 39 000ha, Kasanka is one of Zambia’s smallest national parks, yet it is home to the world’s largest mammal migration. A small park with a massive treasure.

–  The Kasanka bat migration plays a leading role in the regeneration of forests. The bats’ role as pollinators and seed dispersers is significant, and their ability to travel great distances helps them maintain genetic diversity and connect plant populations across fragmented landscapes.

– According to GPS tagging studies by the Max Planck Institute of Animal Behavior in Germany, straw-coloured fruit bats have the furthest migration routes of all mammals, including other bats, in Africa, travelling thousands of kilometres annually – a distance unheard of in any other fruit bat species.

– Each individual of this species has its own unique scent and call. This allows mothers to find their young in large colonies of millions

– Research by the Kasanka Trust has found that the bats fly on average 50 km from their roost every night to feed in the surrounding forests, covering an area of more than 500,000 hectares! 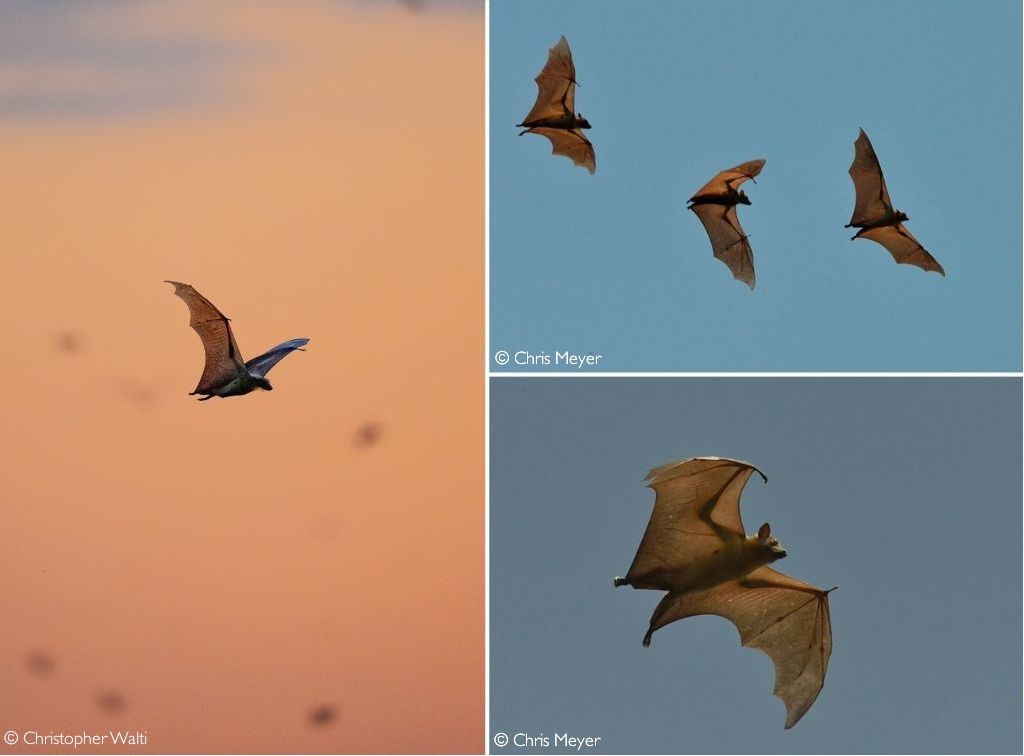 The bats start arriving in Zambia’s Kasanka National Park towards the end of October. Their numbers steadily increase over the next few weeks. Mid-October to mid-December is the best time for the bats. By the end of December / beginning of January, the forest is bat free.

It’s not just the bats you will see at this time of the year. The rains bring green grass, bright flowers and plenty of migratory birds. Although Kasanka isn’t a place for the ‘Big Five’, you are almost guaranteed to see the rare and special sitatunga.

Wasa Lodge, located on the shores of a lovely lake, is the closest lodge accommodation for the Kasanka bat migration. There is also a seasonal fly camp, Kapabi, which is well situated. Kasanka also has several self-catering campsites.