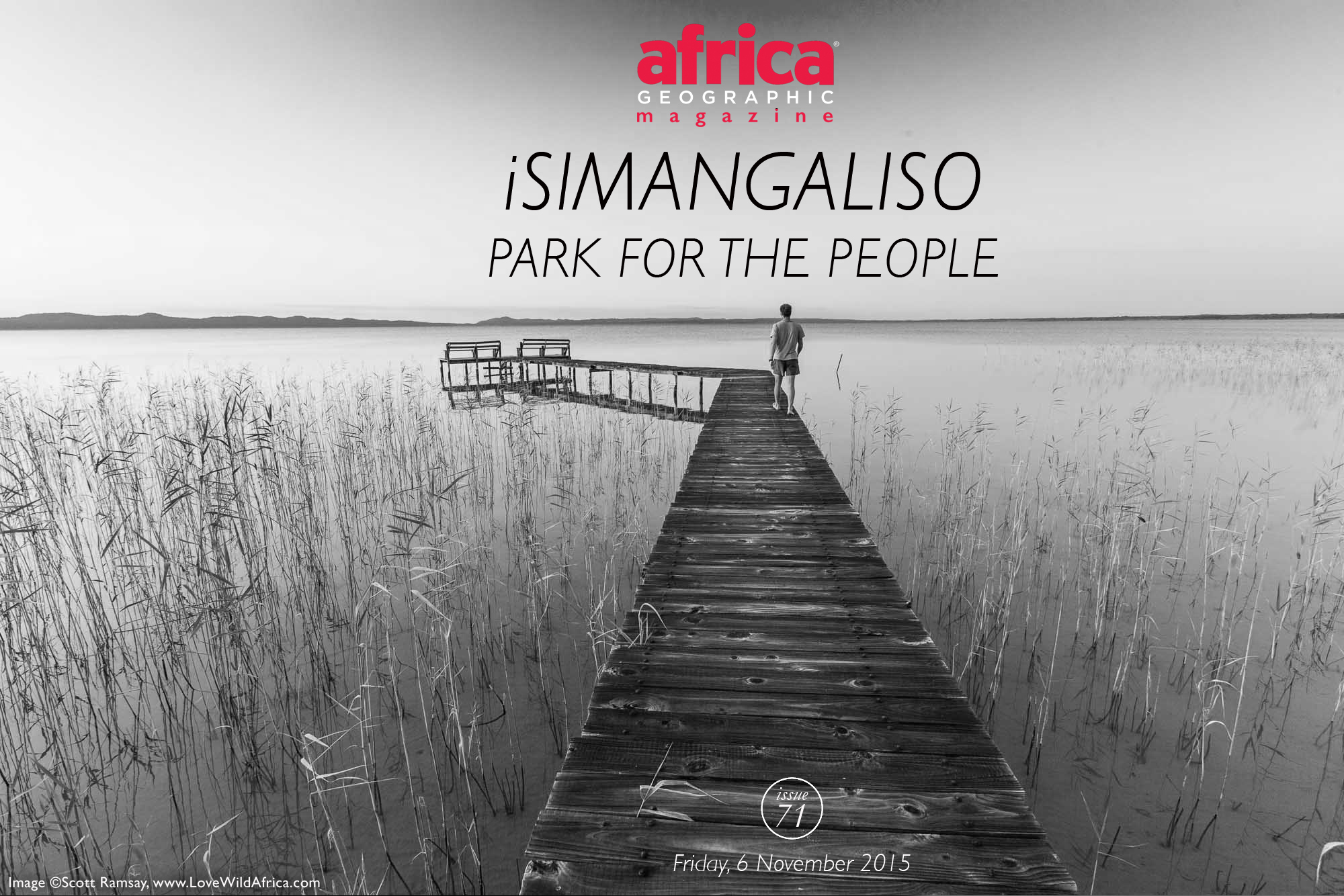 Situated in eastern KwaZulu-Natal, South Africa’s iSimangaliso Wetland Park holds a plethora of ecological and cultural treasures. A park for the people that spans 220 kilometres of coastline, it is an example of diversity at its finest.

The name iSimangaliso means miracle and wonder in isiZulu, and Africa Geographic’s CEO, Simon Espley, can most certainly attest to that after completing iSimangaliso’s mountain bike challenge:

“‘If you encounter an elephant, buffalo or hippo, keep cycling!’ This was the gist of the briefing that we were given before the start of our mountain bike adventure. This was followed by advice on how to behave if any of the animals as mentioned earlier might be stubbornly blocking the bush tracks and game trails that we were following on our 4-day cycle through Maputoland.

And so began an immersion for me into the depths of iSimangaliso Wetland Park – a World Heritage Site, Africa’s oldest protected area, and without a doubt one of South Africa’s most beautiful and diverse national parks.

Perhaps a safari from a saddle is not everybody’s cup of tea, but potentially being ‘on the menu’, as it were, certainly gave me a different perspective than from the comfort of a vehicle. Throughout the event, we had the chance to cycle through eight distinct interlinking ecosystems – each one unique and yet somehow also at one with the others.

The region was experiencing an extended drought during my adventure, with the receding lake shoreline and many of the marshes reduced to rock-hard cracked mud as far as the eye could see. Yet each day was magical as we navigated our way through sand forests, thorn savannah, rolling palm-dotted grasslands, lake shorelines and across rocky Lebombo mountain ridges.

One particularly magical stretch for me was a long track through the sand forests bordering Lake St Lucia’s False Bay. It was early morning, and the forest was alive with birds – crested guineafowl and gorgeous bush-shrikes being personal highlights as I toiled through the thick sand, alone in my thoughts. A red forest duiker scuttling across the path in front of me caught my attention, as did a family of bushpigs that went snorting off into the undergrowth at my approach. As the morning matured and the temperature rose, so the avian chorus changed, with tambourine doves and yellow-rumped tinkerbirds taking over with their melancholy musing.

One afternoon I strolled through the extremely laid back town of St Lucia to catch a ferry cruise up the lake – cold beers and a comfy chair made for a nice change from a day in the saddle. Imagine my excitement when I spotted a reclusive African finfoot in the nearby reeds, and I tried to point it out to my fellow passengers. However, they were captivated by the large pod of hippos grunting, snorting and cavorting right next to the ferry. And for me, that moment sums up iSimangaliso in a nutshell – this incredibly endowed wonderland has something for everybody.

During our cycle, we also mingled with the local people who depend on this spectacular area for their livelihoods and who play such a vital role in its ongoing survival. A lasting memory of iSimangaliso was the involvement of local people in the management of the park and the surrounding areas – this is an essential element of conservation going forward. It is also good to know that visiting iSimangaliso contributes directly to community welfare as well as to biodiversity conservation.”

The history of iSimangaliso makes it clear why the park places community development at the forefront of their conservation strategies.

During the late eighties and early nineties, half a million South African citizens signed a petition against a multinational mining company’s plans to mine the iSimangaliso dunes for titanium and other heavy metals. The citizens were also backed by Nelson Mandela, who strongly approved of nature-based tourism as an environmentally friendly approach to income generation. A battle ensued, and the citizens won, with South Africa’s government ruling in favour of protecting the area’s fragile beauty. With five cultural groups that call the park their home, the development of a ‘people’s park’ in the area was suggested as an alternative to mining, and tourism and conservation became important regional economic drivers. It became vital that iSimangaliso create a successful conservation model that also offered tangible benefits to poverty-stricken communities in and around the area.

According to iSimangaliso’s CEO, Andrew Zaloumis: “There are still many challenges facing iSimangaliso. The most important is to ensure that progress continues to be made towards putting an end to the paradox of poverty amidst the plenty of nature.”

With this in mind, there is an essential focus on improving soils and providing access to water, fencing and seeds to communities to improve food security in the area, while also protecting the vulnerable coastal peat swamp forest.

Furthermore, the development of infrastructure in the park is creating employment, and land claimants are empowered to co-manage the area. At the same time, the iSimangaliso Authority enables community members to develop skills in hospitality and guiding so that they can prosper in the local tourism industry.

The communities living in and around iSimangaliso today have a rich relationship with the land and its past, and tribal traditions, as well as indigenous knowledge, continue to shape the current environment in which 526 bird species and 2,505 species of flowering plants flourish. And it is the inherent understanding of the importance of conserving both our cultural and natural landscapes that makes the surrounding majesty of Lake St Lucia so unique.

With its 25,000-year-old coastal dunes and 700-year-old fish traps, the wetland park is of historical significance. It is home to the prehistoric-looking coelacanth, which was once considered extinct, but has been discovered living in the deep submarine canyons off Sodwana Bay. The park is also the largest protected area of recorded Stone Age and Iron Age sites in South Africa.

With the world’s highest density of black rhino, Africa’s largest estuarine system, and the greatest bird diversity on the continent, the biological wealth of this area is testament to what can be achieved in the name of conservation.

This 332,000-hectare park is an outstanding example of the global values that former President Mandela so strongly stood for, and it’s easy to understand why the park became the first place in South Africa to be listed as a World Heritage Site by UNESCO in December 1999.

In a poignant speech that marked the reintroduction of elephants to the Eastern shores of Lake St Lucia in 2002, Mandela pronounced:

These words have forever engrained themselves onto the shores that stretch from Maphelane to Kosi Bay, and no sentence has ever better captured the essence of the area.

Thanks to its entry fee pricing strategy, iSimangaliso truly remains a park for the people by maintaining public access to the park and activities at affordable prices.

And to complement the sheer ecological, historical and social diversity of the region, there is a variety of adventure activities to enjoy in the area, including kayaking, deep sea charter fishing and horseback riding.

Whether you’re interested in birding or game viewing on trails, making friends with the hippos and crocodiles on an estuary boat cruise on Lake St Lucia, or scuba diving amidst the 1,258 species of fish and colourful coral reefs, there is something for everyone both above and below land.

From spotting the Big Five in the bushes to finding the five different species of turtles on the beaches, it’s hard to run short of things to keep you busy in this stretch of paradise.

Just don’t miss the start of the ancient nesting ritual when the leatherback and loggerhead turtles return each November to lay their eggs on iSimangaliso’s pristine shores. From 1st November 2015 to 28th February 2016, iSimangaliso has allowed Thonga Beach Lodge to conduct turtle drives once per night in a 4×4 vehicle that is allowed to carry a maximum of 10 guests and that leaves one hour before low tide. This can mean some very late nights, but it’s worth it!

Accommodation ranges from rustic trail camps to high-end lodges, so the park does cater to almost every passion and every budget, which explains why thousands of tourists from all over the world visit each year.

If you’re a happy camper, then you have your pick of the litter in iSimangaliso. The campsites in the park vary in size from a private 10-site facility at Mabibi Beach to a much larger facility divided into several camps at Sodwana Bay. It’s worth checking out the iSimangaliso website for further information to help you decide on what suits you best.

Cranking the comfort up a notch, several self-catering options range from rustic huts to log cabins. These are based primarily in Kosi Bay, uMkhuze, False Bay, Eastern Shores and Maphelane, and you can make your choices depending on whether a swimming pool is of prime importance or ocean views are what makes you tick.

And if you’re only interested in catered lodges, two incredible options will cater to your every whim in the Coastal Forest section of the park – Rocktail Beach Camp and Thonga Beach Lodge. Alternatively, Coral Divers or Mseni Lodge are two establishments in Sodwana Bay that will help you to start each day with a grateful heart.

Alternatively, if you’re always keen for a luxury safari experience, you could stay at Rhino River Lodge. Located in the heart of Zululand, it’s a great place to base yourself if you wish to visit the other attractions in the area such as Hluhluwe–iMfolozi Park as well as iSimangaliso.

Each season has something extraordinary to offer in this region, but you can expect more rain from November to February, which means that the vegetation is much greener. March to October are the cooler months when it is less humid, so if you love to walk or hate the heat, then this is the best time for you. And if you’re a twitcher, then June to August are the best months to bring your binoculars as this is breeding season.

Just be warned that if you do wish to visit the park over the South African school holidays, you’ll need to book accommodation well in advance.