Hunting ban in Botswana should be lifted says government committee, and elephants culled

Posted on February 22, 2019 by News Desk in the News Desk post series.
ShareTweetPinEmailShareShareLinkedIn 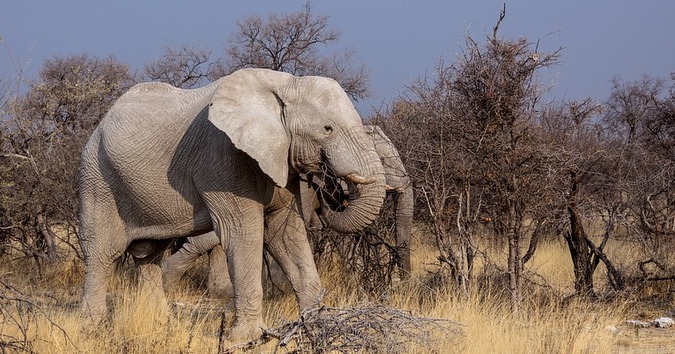 A report submitted by a Botswana government subcommittee has proposed that the ban on hunting should be lifted and the hunting industry grown, that elephants should be culled and the meat processed, some animal migration routes closed and human-wildlife conflict strategies implemented.

The report was officially handed over to President Mokgweetsi Masisi at a briefing on Thursday. The subcommittee, made up of seven cabinet ministers and one junior minister, have been consulting with researchers and hunters as well as attending weeks of public hearings on the elephant hunting ban, which was introduced in 2014 by the previous administration.

The report and its recommendations will now be debated by the President and the cabinet, before becoming law.

1. It is my pleasure to officially handover a report of the Cabinet Sub Committee on Hunting Ban Social Dialogue to His Excellency, the President of the Republic of Botswana, Dr. Mokgweetsi Eric Keabetswe Masisi.

2. I wish to highlight that the Ministry of Environment, Natural Resources Conservation and Tourism, pursuant to Statutory Instrument no. 2 of 2014, took a decision to stop hunting of wildlife in all areas of Botswana effective January 2014.

3. Your Excellency, the hunting ban has become a subject for discussion in the country because of its apparent experience and observed consequences, with two schools of thought on the debate;

• Proponents of the hunting ban postulate that it is a good and noble conservation effort which will create a conducive environment for increased wildlife populations, and;
• Those against the hunting ban are of the view that hunting is a good wildlife management tool if properly implemented.

4. They maintain that if and when wildlife populations and human livelihoods are taken into consideration, this would translate to communities becoming good conservationists. It was also observed that as communities realise the potential value and associated income to be derived from wildlife resources and related activities, they will be converted to be good conservationists as opposed to concentrating on negative aspects of property destruction and loss of human lives caused by wildlife.

5. It is on the basis of the above that in June 2018 His Excellency the President established “The Hunting Ban Sub Committee of Cabinet” to kick-start a social dialogue aimed at reviewing the ban on hunting. The Cabinet Membership of this Committee is as follows;

6. Your Excellency, this is a Consultation Report as assigned, it therefore embodies communication between those consulting and those consulted on the identified problem: The Hunting Ban. The report covers the consultation outline, opinions of those consulted, conclusions and the recommendations.

7. It is essential to note that the consultations covered Kgotla meetings, Full Council meetings as per Appendix 1 (page 33), submission of papers and meetings with individuals and private entities at different forums outside the kgotla. Those entities consulted include Elephants Without Borders, Community Trusts such as KALEPA-Kazungula, Lesoma, Pandamatenga, CECT-Chobe West as well as the NGO Council, Botswana Wildlife Producers Association and individuals including Richard White, Mark Kyriacou and Richard Pascall of Bartrek Ranch in Tsabong.

8. Your Excellency, the Terms of Reference as clearly highlighted on Page 4 of this report guided the process of consultation.

9. From the submissions made by the communities and other stakeholders, the Committee as assigned by Your Excellency, found it necessary to propose the following recommendations, stated here in summary form.

• Hunting ban be lifted.
• Develop a legal framework that will create an enabling environment for growth of safari hunting industry.
• Manage Botswana elephant population within its historic range
• Department of Wildlife and National Parks (DWNP) should undertake an effective community outreach program within the elephant range for Human Elephant Conflict mitigation
• Strategically placed human wildlife conflict fences be constructed in key hotspot areas
• Game ranches be demarcated to serve as buffers between communal and wildlife areas.
• Compensation for damage caused by wildlife, ex gratia amounts and the list of species that attract compensation be reviewed. In addition, other models that alleviate compensation burden on Government be considered.
• All wildlife migratory routes that are not beneficial to the country’s conservation efforts be closed.
• The Kgalagadi southwesterly antelope migratory route into South Africa should be closed by demarcating game ranches between the communal areas and Kgalagadi Wildlife Management Areas.
• Regular but limited elephant culling be introduced and establishment of elephant meat canning, including production of pet food and processing into other by products.

10. Your Excellency, with these few remarks I hereby officially handover the Report of the Cabinet Sub Committee on Hunting Ban Social Dialogue to you.

I thank you Sir. 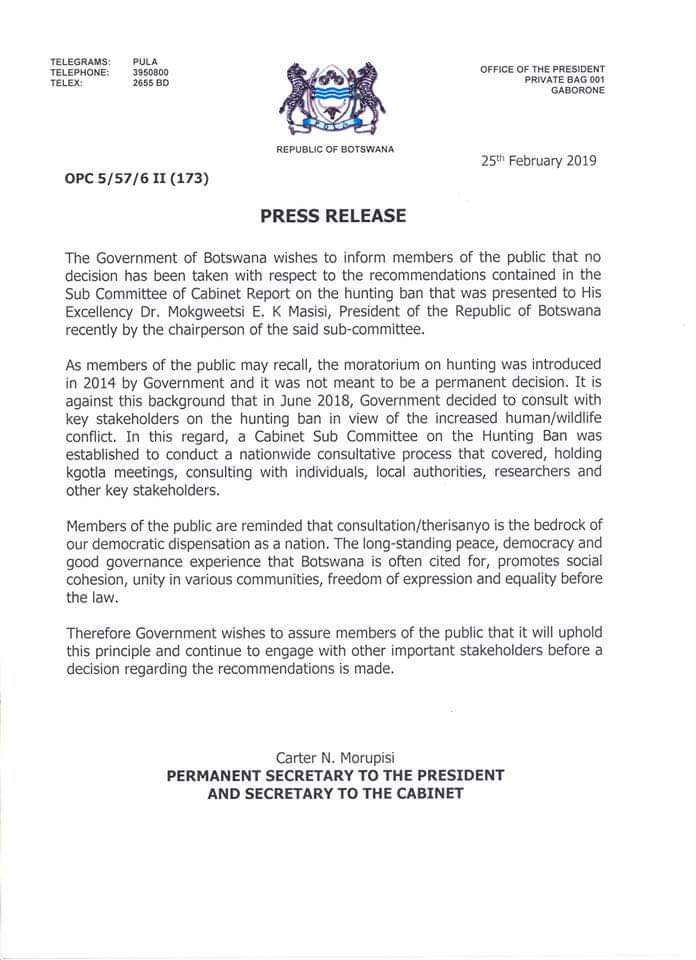